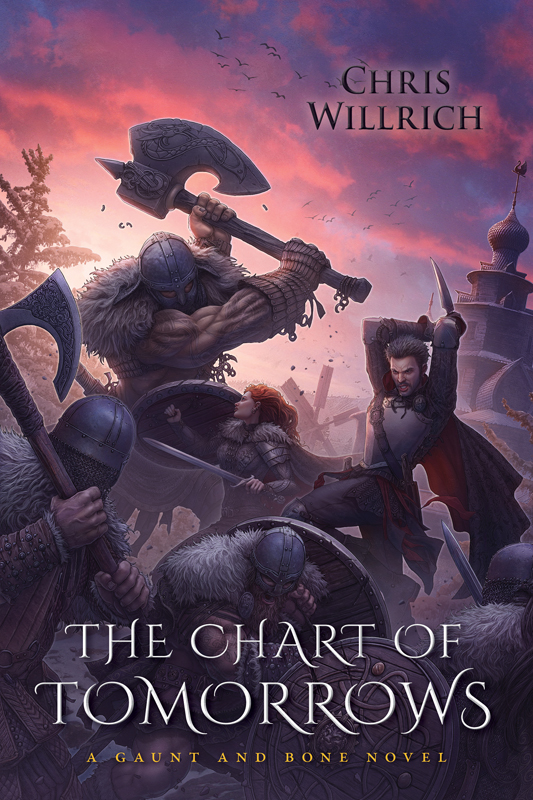 The Scroll of Years 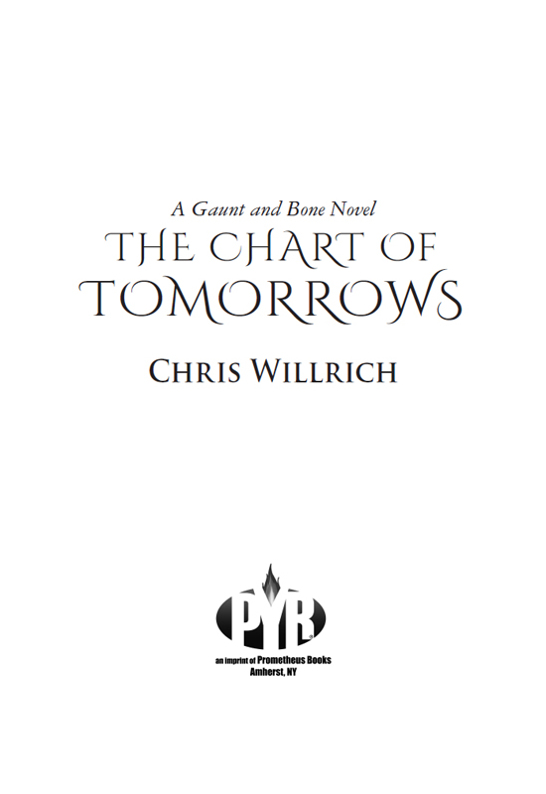 Published 2015 by Pyr®, an imprint of Prometheus Books

The Chart of Tomorrows: A Gaunt and Bone Novel.
Copyright © 2015 by Chris Willrich. All rights reserved. No part of this publication may be reproduced, stored in a retrieval system, or transmitted in any form or by any means, digital, electronic, mechanical, photocopying, recording, or otherwise, or conveyed via the Internet or a website without prior written permission of the publisher, except in the case of brief quotations embodied in critical articles and reviews.

This is a work of fiction. Characters, organizations, locales, and events portrayed in this novel either are products of the author’s imagination or are used fictitiously.

The chart of tomorrows : a Gaunt and Bone novel/Chris Willrich.

In memory of Jane Eades, Georgia Grytness, and Anne Rohweder

Chapter 9: A Journey to Kantenjord

Chapter 15: A Journey to Kantenjord, Continued

Chapter 21: A Journey to Kantenjord, Continued

Chapter 31: A Journey to Kantenjord, Continued

Chapter 38: A Journey to Kantenjord, Continued

IMAGO BONE’S NOTES ON PEOPLE, PLACES, AND THINGS BECAUSE HE IS GETTING OLDER
AND HIS MEMORY IS TAXED

A-Girl-Is-A-Joy:
Also, Joy Snøsdatter, Joy. Daughter of Snow Pine. Chosen to be the Runethane, champion of the Bladed Isles. It might have gone easier for her if she hadn’t.

A Tumult of Trees on Peculiar Peaks:
Also known as the Scroll of Years. A landscape painting that either contains or accesses a pocket dimension of accelerated time. You see, Gaunt? I can use magical jargon too.

Aile:
A headwoman of the Vuos people. I heard of her much later, yet somehow I feel she belongs here.

Alder:
A former wizardly apprentice, my comrade at the Gull-Jarl’s steading.

Alfhild:
A human raised as one of the fey uldra-folk. A princess of the uldra, no less. It seems to have affected her mind.

All-Now, the:
Mirabad term for the compassionate creator of the universe.

Anansi
:
An exploratory ship from Kpalamaa.

Arngrimur Townflayer:
One of the Nine Wolves. You may notice a theme in their names.

Arnulf Pyre-Maker:
One of the Nine Wolves.

Aughatai:
Jewelwolf’s horse. There was something very wrong with that horse.

Brambletop:
A young woman of Larderland. It hurts to think of her now.

Cairn:
A Chooser of the Slain.

changeling:
A troll or uldra child, left in place of a kidnapped human child.

Chart of Tomorrows, The
:
The Winterjarl’s protean book, full of cryptic passages and alarming maps.

Chooser of the Slain:
An agent of the old gods of the Bladed Isles.

Corinna:
Princess, later queen, of Soderland. I was never sure where we stood with her, but I was always sure she was in charge.

Crypttongue:
A magic sword Gaunt wielded for a time. I hate magic swords.

Deadfall:
A sapient magic carpet. Before I met it, those words would not have seemed frightening.

Dolma:
An exiled warrior of Xembala. For a time she helped my son. I am grateful.

Draug:
A spirit creature found upon the sea and within the Straits of Tid. Draugar can take the forms of dead folk you’ve known.

Draugmaw:
An unnatural, gigantic maelstrom. It has Draugar in it.

Einar Bringer of Wailing:
One of the Nine Wolves.

Eldshore, the:
A slowly crumbling but still mighty continental empire.

Everart:
Rabble-rouser of Soderland. Quite good at it.

Fiskegard:
Independent-minded islands founded by fishermen, nominally part of Oxiland, periodically filled with itinerant workers. I came from a family of fishermen, and the scent was like home.

Foamreaver:
Can be a seafarer, trader, raider, or all of them together.

Freidar:
An old tavernkeeper and Runewalker. Husband of Nan. Kind to Innocence, he was a good companion when we sailed aboard
Leaping Bison
.

Gamellaw:
A region governed by old laws under which steadings are the unit of civilization, not nations. Takes in Svardmark from the Morkskag to the Chained Straits, and all of Spydbanen.

Garmstad:
A town and territory allied to Soderland.

Gaunt:
What I call Persimmon when we’re about our errands. The other half of my mind.

Great Chain of Unbeing:
A huge artifact absorbing the power of the dragons whose immense bodies gave form to the Bladed Isles.

Gullvik:
Name of a town and a small domain in Svardmark.

Haboob:
An efrit, a spirit of the desert.

Hakon:
The retired king of Soderland.

Havtor:
A slave in the Gull-Jarl’s steading. May his name be honored.

Haytham ibn Zakwan ibn Rihab:
Inventor and gentleman of Mirabad, daring to combine natural philosophy and magic. He gave the world ballooning. I might regret that, had I never flown.

Hekla:
Huginn Sharpspear’s companion. I think she was more formidable than he.