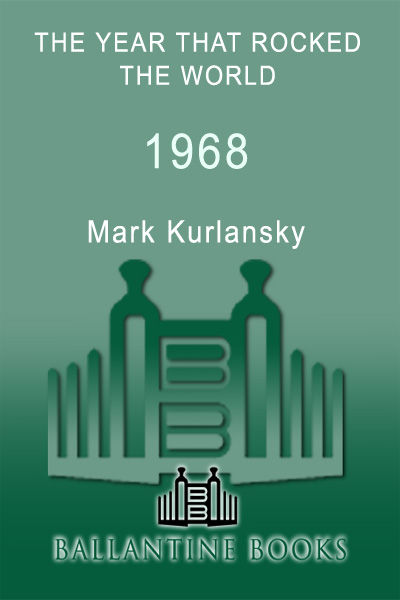 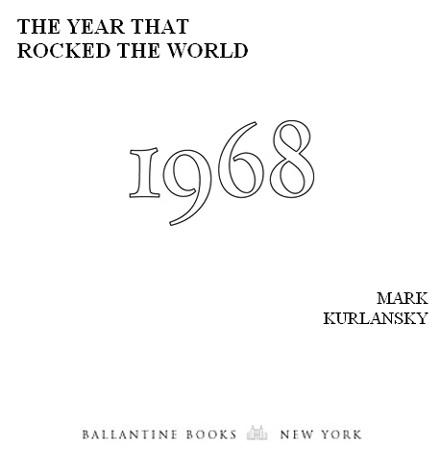 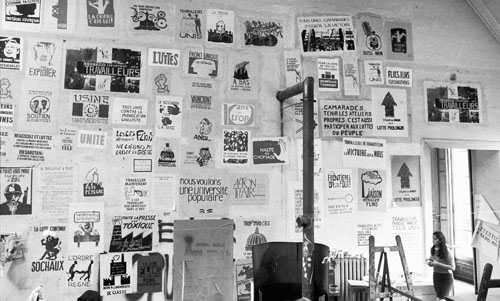 PART I
The Winter of Our Discontent

CHAPTER 1
The Week It Began

CHAPTER 2
He Who Argues With a Mosquito Net

CHAPTER 3
A Dread Unfurling of the Bushy Eyebrow

CHAPTER 4
To Breathe in a Polish Ear

CHAPTER 5
On the Gears of an Odious Machine

CHAPTER 9
Sons and Daughters of the New Fatherland

CHAPTER 10
Wagnerian Overtones of a Hip and Bearded Revolution

CHAPTER 12
Monsieur, We Think You Are Rotten

CHAPTER 13
The Place to Be

CHAPTER 14
Places Not to Be

CHAPTER 15
The Craft of Dull Politics

CHAPTER 16
Phantom Fuzz Down by the Stockyards

CHAPTER 17
The Sorrow of Prague East

CHAPTER 18
The Ghastly Strain of a Smile

CHAPTER 19
In an Aztec Place

PART IV
The Fall of Nixon

CHAPTER 20
Theory and Practice for the Fall Semester

OTHER BOOKS BY MARK KURLANSKY

To my beautiful Talia Feiga;
so that she will know truth from lies, love life, hate war,
and always believe that she can change the world

I want to express my deep admiration and profound gratitude to Walter Cronkite, Gene Roberts, and Daniel Schorr, who informed this book with countless invaluable insights and the wisdom they so generously shared from three most remarkable careers.

I also owe a great debt to Nancy Miller, my patient editor, who has been dreaming and thinking with me about this book for ten years; to Deirdre Lanning, who helped me through a cybernightmare; and to my absolutely incomparable agent, Charlotte Sheedy, who is the kind of sixties person I am proud to have as a friend.

Thanks to Alice Dowd of the New York Public Library for her help and cooperation, to Mary Haskell for generously sharing her poster collection, and to my friend Hanna Kordowicz for her help in Poland, Elzbieta Wirpsza for her Polish translation, my friend Krystyna Skalski and Andrzej Dudzinski for help in Warsaw, Mark Segall for his assistance, and Dariusz Stola for his insights into Polish history. Thanks to Peter Katel, Fernando Moreno, and Tito Ramirez Morales for help in Mexico City, and Chantal Siri and Chantal Regnault in Paris. Thanks to Marlene Adler for her help at CBS, Jane Klain at the Museum of Broadcasting, Sarah Shannon for help in research, and Deborah Kroplick, without whose help and enthusiasm I am not sure how I would have finished.

Thanks to my wife, Marian Mass, who helped me in a hundred ways and whose great heart renews my faith in the world, and to the memory of her sister, Janet Phibbs, who I think would have liked this book.

And to everyone who said “No!” and most especially all those who are still saying it.

THE YEAR THAT
ROCKED THE WORLD

One of the pleasures of middle age is to find out that one
was
right, and that one was much righter than one knew at say
17
or
23.

There has never been a year like 1968, and it is unlikely that there will ever be one again. At a time when nations and cultures were still separate and very different—and in 1968 Poland, France, the United States, and Mexico were far more different from one another than they are today—there occurred a spontaneous combustion of rebellious spirits around the world.

There had been other years of revolution. 1848 had been such a year, but in contrast to 1968 its events were confined to Europe, its rebellions confined to similar issues. There had been other global events, the result of global empire building. And there was that huge, tragic global event, World War II. What was unique about 1968 was that people were rebelling over disparate issues and had in common only that desire to rebel, ideas about how to do it, a sense of alienation from the established order, and a profound distaste for authoritarianism in any form. Where there was communism they rebelled against communism, where there was capitalism they turned against that. The rebels rejected most institutions, political leaders, and political parties.

It was not planned and it was not organized. Rebellions were directed through hastily called meetings; some of the most important decisions were made on a moment’s whim. The movements were antiauthoritarian and so were leaderless or had leaders who denied being leaders. Ideologies were seldom clear, and there was widespread agreement on very few issues. In 1969, when a federal grand jury indicted eight activists in connection with the demonstrations in Chicago in 1968, Abbie Hoffman, one of the eight, said about the group, “We couldn’t agree on lunch.” And though rebellion was everywhere, rarely did these forces come together, or when they did, as with the civil rights, antiwar, and feminist movements in the United States, or the labor and student movements in France and Italy, it was an alliance of temporary convenience, quickly dissolved.

Four historic factors merged to create 1968: the example of the civil rights movement, which at the time was so new and original; a generation that felt so different and so alienated that it rejected all forms of authority; a war that was hated so universally around the world that it provided a cause for all the rebels seeking one; and all of this occurring at the moment that television was coming of age but was still new enough not to have yet become controlled, distilled, and packaged the way it is today. In 1968 the phenomenon of a same-day broadcast from another part of the world was in itself a gripping new technological wonder.

The American war in Vietnam was not unique and certainly no more reprehensible than numerous other wars, including the earlier French war in Vietnam. But this time it was being pursued by a nation with unprecedented global power. At a time when colonies were struggling to re-create themselves as nations, when the “anticolonial struggle” had touched the idealism of people all over the world, here was a weak and fragile land struggling for independence while this new type of entity known as a “superpower” dropped more non-nuclear bombs on its small territory than had been dropped on all of Asia and Europe in World War II. At the height of 1968 fighting, the U.S. military was killing every week the same number of people or more as died in the September 11, 2001, World Trade Center attack. While within the movements in the United States, France, Germany, and Mexico there was tremendous splintering and factionalism, everyone could agree—because of the power and prestige of the United States and the brutal and clearly unfair nature of the American war in Vietnam—that they opposed the Vietnam War. When the American civil rights movement became split in 1968 between the advocates of nonviolence and the advocates of Black Power, the two sides could come together in agreement on opposition to the Vietnam War. Dissident movements around the world could be built up simply by coming out against the war.

When they wanted to protest, they knew how to do it; they knew about marches and sit-ins because of the American civil rights movement. They had seen it all on television from Mississippi, and they were eager to be freedom marchers themselves.

1968 was a time of shocking modernism, and modernism always fascinates the young and perplexes the old, yet in retrospect it was a time of an almost quaint innocence. Imagine Columbia students in New York and University of Paris students discovering from a distance that their experiences were similar and then meeting, gingerly approaching one another to find out what, if anything, they had in common. With amazement and excitement, people learned that they were using the same tactics in Prague, in Paris, in Rome, in Mexico, in New York. With new tools such as communication satellites and inexpensive erasable videotape, television was making everyone very aware of what everyone else was doing, and it was thrilling because for the first time in human experience the important, distant events of the day were immediate.

It will never be new again. “Global village” is a sixties term invented by Marshall McLuhan. The shrinking of the globe will never be so shocking in the same way that we will never again feel the thrill of the first moon shots or the first broadcasts from outer space. We now live in a world in which we await a new breakthrough every day. If another 1968 generation is ever produced, its movements will all have Web sites, carefully monitored by law enforcement, while they are e-mailing one another for updates. And no doubt other tools will be invented. But even the idea of new inventions has become banal.

Born in 1948, I was of the generation that hated the Vietnam War, protested against it, and has a vision of authority shaped by the memory of the peppery taste of tear gas and the way the police would slowly surround in casual flanking maneuvers before moving in, club first, for the kill. I am stating my prejudices at the outset because even now, more than three decades later, an attempt at objectivity on the subject of 1968 would be dishonest. Having read
The New York Times, Time, Life, Playboy, Le Monde, Le Figaro,
a Polish daily and a weekly, and several Mexican papers from the year 1968—some claiming objectivity and others stating their prejudices—I am convinced that fairness is possible but true objectivity is not. The objective American press of 1968 was far more subjective than it realized.

Working on this book reminded me that there was a time when people spoke their minds and were not afraid to offend—and that since then, too many truths have been buried. 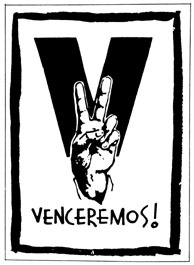 Mexican student movement silk-screen poster with the SDS peace sign and a Cuban Che Guevara slogan “We shall win!”

My Ex-Boyfriend's Wedding by T. Sue VerSteeg
Getting Old Is a Disaster by Rita Lakin
Dust on the Sea by Edward L. Beach
Mary Poppins Opens the Door by P. L. Travers
A Matter of Mercy by Lynne Hugo
Simon by Rosemary Sutcliff
No Sex in the City by Randa Abdel-Fattah
The Notorious Scoundrel by Alexandra Benedict
Singapore Swing by John Malathronas
Tamarack River Ghost by Jerry Apps
Our partner