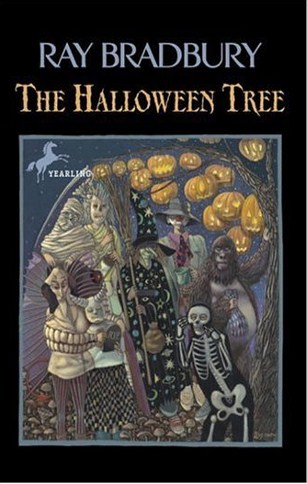 A Bantam Spectra Book / published by arrangement with
Alfred A. Knopf, Inc.

This book may not be reproduced in whole or in part by mimeograph
or any other means, without permission in
writing from the publisher.
For information address: Alfred A. Knopf, Inc.
201 E. 50th Street, New York, NY 10022

ago in the graveyard at

midnight on the Island

of Janitzio at Lake Patzcuaro,

on each anniversary of

The Day of the Dead.

A thousand pumpkin smiles look down from the Halloween Tree, and
twice-times-a-thousand fresh-cut eyes glare and wink and blink, as
Moundshroud leads the eight trick-or-treaters—no,
nine.
But where
is
Pipkin?—on a leaf-tossed, kite-flying, gliding, broomstick-riding trip to learn the secret of All Hallows’ Eve.

“Well,” asks Moundshroud at journey’s end, “which was it? A Trick or a Treat?”

And so will you.

It was a small town by a small river and a
small lake in a small northern part of a Midwest state. There wasn’t so
much wilderness around you couldn’t see the town. But on the other hand
there wasn’t so much town you couldn’t see and feel and touch and smell
the wilderness. The town was full of trees. And dry grass and dead
flowers now that autumn was here. And full of fences to walk on and
sidewalks to skate on and a large ravine to tumble in and yell across.
And the town was full of…

And it was the afternoon of Halloween.

And all the houses shut against a cool wind.

And the town full of cold sunlight.

But suddenly, the day was gone.

Night came out from under each tree and spread.

Behind the doors of all the houses there was a scurry of mouse feet, muted cries, flickerings of light.

Behind one door, Tom Skelton, aged thirteen, stopped and listened.

The wind outside nested in each tree, prowled the sidewalks in invisible treads like unseen cats.

Tom Skelton shivered. Anyone could see that the wind was a special wind
this night, and the darkness took on a special feel because it was All
Hallows’ Eve. Everything seemed cut from soft black velvet or gold or
orange velvet. Smoke panted up out of a thousand chimneys like the
plumes of funeral parades. From kitchen windows drifted two pumpkin
smells: gourds being cut, pies being baked.

The cries behind the locked house doors grew more exasperated as
shadows of boys flew by windows. Half-dressed boys, greasepaint on
their cheeks; here a hunchback, there a medium-sized giant. Attics were
still being rummaged, old locks broken, old steamer chests disemboweled
for costumes.

Tom Skelton put on his bones.

He grinned at the spinal cord, the ribcage, the kneecaps stitched white on black cotton.

Lucky! he thought. What a name you got! Tom Skelton. Great for Halloween! Everyone calls you Skel
e
ton! So what do you wear?

Eight boys made a series of beautiful leaps over flowerpots, rails,
dead ferns, bushes, landing on their own dry-starched front lawns.
Galloping, rushing, they seized a final sheet, adjusted a last mask,
tugged at strange mushroom caps or wigs, shouting at the way the wind took them along, helped
their running; glad of the wind, or cursing boy curses as masks fell
off or hung sidewise or stuffed up their noses with a muslin smell like
a dogs hot breath. Or just letting the sheer exhilaration of being
alive and out on this night pull their lungs and shape their throats
into a yell and a yell and a … yeeeellll!

Eight boys collided at one intersection.

Bang! They shook back from their conclusions, all happy-fouled and
tangled under a street-corner light. The swaying electric lamp belled
in the wind like a cathedral bell. The bricks of the street became
planks of a drunken ship all tilted and foundered with dark and light.

Behind each mask was a boy.

“Mummy!” cried the boy inside the ancient yellowed wrappings, like an immense cigar stalking the night streets.

“No time!” said Someone Hidden Behind Yet Another Mystery of Muslin and Paint. “Trick or treat!”

Shrieking, wailing, full of banshee mirth they ran, on everything
except sidewalks, going up into the air over bushes and down almost
upon yipping dogs.

But in the middle of
running, laughing, barking, suddenly, as if a great hand of night and
wind and smelling-something-wrong stopped them, they stopped.

“Should be
nine
of us! Someone’s missing!”

How did they know? They were all hidden behind masks. And yet, and yet…

They could
feel
his absence.

“Pipkin! He’s never missed a Halloween in a zillion years. Boy, this is awful. Come on!”

In one vast swerve, one doglike trot and ramble, they circled round and
down the middle of the cobble-brick-street, blown like leaves before a
storm.

They pulled to a halt. There was Pipkin’s house, but not enough
pumpkins in the windows, not enough corn-shocks on the porch, not
enough spooks peering out through the dark glass in the high upstairs
tower room.

“It wouldn’t be Halloween without Pipkin”

“Not Halloween,” they moaned.

And someone threw a crabapple at Pipkin’s front door It made a small thump, like a rabbit kicking the wood.

They waited, sad for no reason, lost for no reason. They thought of
Pipkin and a Halloween that might be a rotten pumpkin with a dead
candle if, if, if—Pipkin wasn’t there.

Come on, Pipkin. Come out and
save
the Night!

Why were they waiting, afraid for one small boy?

Joe Pipkin was the greatest boy who ever lived. The grandest boy who
ever fell out of a tree and laughed at the joke. The finest boy who
ever raced around the track, winning, and then, seeing his friends a
mile back somewhere, stumbled and fell, waited for them to catch up,
and joined, breast and breast, breaking the winner’s tape. The jolliest
boy who ever hunted out all the haunted houses in town, which are hard
to find, and came back to report on them and take all the kids to
ramble through the basements and scramble up the ivy outside-bricks and
shout down the chimneys and make water off the roofs, hooting and
chimpanzee-dancing and ape-bellowing. The day Joe Pipkin was born all
the Orange Crush and Nehi soda bottles in the world fizzed over; and
joyful bees swarmed countrysides to sting maiden ladies. On his
birthdays, the lake pulled out from the shore in midsummer and ran back with a tidal wave of boys, a big leap of bodies and a downcrash of laughs.

Dawns, lying in bed, you heard a birdpeck at the window. Pipkin.

You stuck your head out into the snow-water-clear-summer-morning air.

There in the dew on the lawn rabbit prints showed where, just a moment
ago, not a dozen rabbits but one rabbit had circled and crisscrossed in
a glory of life and exultation, bounding hedges, clipping ferns,
tromping clover. It resembled the switchyards down at the rail depot. A
million tracks in the grass but no …

And here he rose up like a wild sunflower in the garden. His great
round face burned with fresh sun. His eyes flashed Morse code signals:

And he sank away in sunflowers to come up all onions.

How he ran so fast no one knew. His tennis shoes were ancient. They
were colored green of forests jogged through, brown from old harvest
trudges through September a year back, tar-stained from sprints along
the docks and beaches where the coal barges came in, yellow
from careless dogs, splinter-filled from climbing wood fences. His
clothes were scarecrow clothes, worn by Pipkin’s dogs all night, loaned
to them for strolls through town, with chew marks along the cuffs and
fall marks on the seat.

His hair? His
hair was a great hedgehog bristle of bright brown-blond daggers
sticking in all directions. His ears, pure peachfuzz. His hands,
mittened with dust and the good smell of airedales and peppermint and
stolen peaches from the far country orchards.

Pipkin. An assemblage of speeds, smells, textures; a cross section of all the boys who ever ran, fell, got up, and ran again.

No one, in all the years, had ever seen him sitting still. He was hard
to remember in school, in one seat, for one hour. He was the last into
the schoolhouse and the first exploded out when the bell ended the day.

Who yodeled and played the kazoo and hated girls more than all the other boys in the gang combined.

Pipkin, whose arm around your shoulder, and secret whisper of great doings this day, protected you from the world.

God got up early just to see Pipkin come out of his house, like one of
those people on a weatherclock. And the weather was always fine where
Pipkin was.

They stood in front of his house.

Any moment now that door would open wide. Pipkin would jump out in a
blast of fire and smoke. And Halloween would
REALLY
begin! Come on,
Joe, oh, Pipkin, they whispered, come on!