Read 2 Death of a Supermodel Online

2 Death of a Supermodel 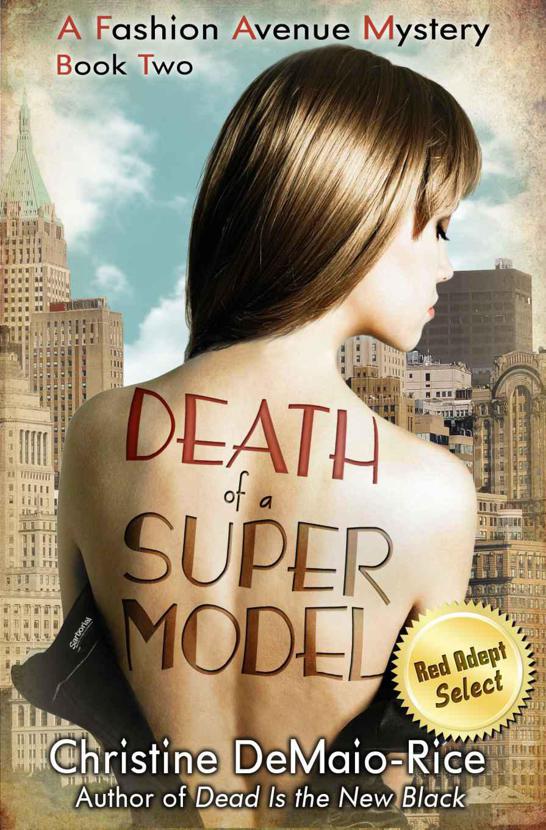 This is book two, if you haven’t read book one,
Dead Is the New Black
, you can buy it at
Amazon 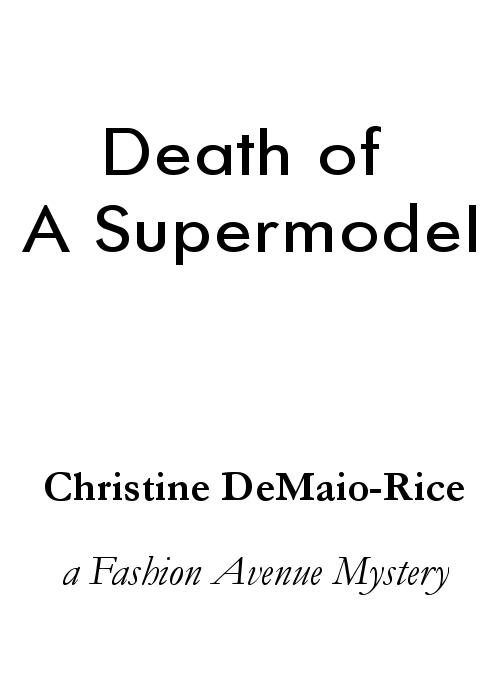 This novel is a work of fiction. Any references to historical events; to real people, living or dead; or to real locales are intended only to give the fiction a sense of reality and authenticity. Names, characters, places, and incidents either are the product of the author’s imagination or are used fictitiously, and their resemblance, if any, to real-life counterparts is entirely coincidental.

“Why are your fists clenched?” Ruby asked.

Laura barely heard her over the grinding music. Experimental thumpy beats under what sounded like a stack of automobiles being crushed was
du jour
for the New York Fall shows, and though she’d fought it, her sister had demanded a trend, any trend and every trend, not be missed on their first season’s show. The noise didn’t seem to bother the attendees or the models, but Laura wanted to bore her own ears out with an awl.

Ruby shrugged. She looked pale and drawn, still gorgeous, of course, with her curly blond locks that contrasted so well with Laura’s blondish, brownish, curly-ish mop, but sick—no, hung-over, and she stayed that way the rest of the day, which placed most of the responsibility for the show’s last minute details on Laura.

Dymphna Bastille presented herself in the Westchester Shift, a magenta wool crepe dress with a hemline that landed somewhere between public acceptance and private business. Laura took out a hankie and held it under Dymphna’s chin. The model responded by rolling her eyes. Laura felt like a rhino looking up at a giraffe.

Dymphna spit her gum into the hankie, adding a little extra lipstick-stained string at the end with a barely discernible smile that was about as good as it got with any of these women. Laura pushed her into the runway’s blinding lights.

“Does she seem eighteen to you?” Laura asked, watching the fabric drape over the model’s perfect little butt.

“What if they’re lying?”

“Then this whole industry’s in trouble.”

Laura tried not to care, but she did. She’d signed a deal with the CFDA: no models under eighteen and none with a BMI under seventeen. She’d already seen the BMI thing slipping through the cracks when Thomasina had shown up for Monday’s weigh-in at sixteen and a half, claiming she’d had a stomach virus. The dress swam on her at the fitting, and Laura had spent half the night altering it. The waist shouldn’t fit anyone who hadn’t had their liver, spleen, and large intestine removed, but it fit Thomasina. She looked like a wire hanger in that dress. Laura looked at the rack. The gown was ready with its eight matte gunmetal buckles at the bodice and hematite beads from waist to ankle. She scanned the rest of the back room. Giraffes flitting, flirting, and preening. Monty had a girl in the chair getting sprayed with some kind of aerosol epoxy. No Thomasina.

Beside her, Rowena Churchill—no relation—shook her arms and cracked her neck, prepping for her walk down the runway like a batter stepping up to the plate. She wore a maxi dress of the same wool crepe as Dymphna’s, with a chain mail belt slung low on the hips. The garment would retail at fifteen hundred dollars no matter how hard the Carnegie sisters tried to get the price below a thousand.

“How old are you, Rowena?” Laura asked as she shifted the belt buckle half an inch to the left.

“Have you seen Thomasina?”

Without another word, Rowena hurled herself onto the runway, her walk matching the aggressive lights and music. Laura imagined her eating the audience on the walk to the end of the runway and spitting them out on the way back. She had superstar written all over her. In two seasons, she was going to be unaffordable.

Ruby nudged her with an elbow. “Penelope’s here.”

Laura scanned the audience, placing the faces she knew. Pierre Sevion, their agent, sat in the front row, looking at who was there instead of the runway. Ivanah Schmiller, wife of their startup investor, sat close by. Her husband, Bob, was nowhere to be seen. Jeremy St. James, Laura’s ex-boss, who still brought a shock of heat to her throat, was three rows back, probably having given up his seat in the front row for someone else. His arms were folded, and his brown eyes focused on the clothes in front of him. The tilt of his straight shoulders leaned into Pierre, who was speaking into Jeremy’s ear.

Penelope Sidewinder, former model, top reviewer for
WWD
, and famed reformer of all things giraffe, sat with a notebook in her lap, pursing her thin beige lips tightly, the rest of her expression obscured by her tiny frameless glasses. A reporter from the
Post
photographed her instead of the model on the runway. She ignored him quite pointedly. The New York
Post
was well beneath her.

She was the architect of the new weight and age requirements for giraffes, bringing the whole industry to heel with a PR campaign funded by her ample savings account and SuperPAC-sized capital from MAAB—Models Against Anorexia and Bulimia—after Juanita June’s collapse during a
Vogue
shoot. Laura feared she would look too closely at Dymphna’s age and, God forbid, Thomasina’s weight, without giving the clothes enough attention to review them.

On the runway, Rowena glanced at the fashion reviewer and swung her head away to look at some other wildly important person in the back row. Heather Dahl presented herself to Ruby for approval, stubbing her cigarette beneath her borrowed Blahnik.

“Do you think she’ll review us?” Ruby asked as she popped up Heather’s collar before pushing the model onto the runway.

“If she does, we won’t have to worry about buying fabric. We’ll use the review as collateral on a loan.”

The music changed, and the lights went dark. Laura approved another giraffe and sent her out, but her mind was on Ruby, who leaned like a drunk on a Saturday night.

“Are you going to be sick again?” Laura asked as she primped the giraffe with a last name like alphabet soup, checking the buckles on the woman’s shoes.

“No,” Ruby said, but she coughed a little.

“Please do not puke on the clothes. It’s our only sample set.”

“I won’t,” Ruby said, looking as though she really wanted to puke on the Italian calfskin jacket crossing her path.

“What did you eat this morning?”

“A Momlette.” A Momlette contained onions, potatoes, egg whites, no salt, white pepper, cream, and a little flour because Mom didn’t know how to make anything without flour.

Ruby ran out of the room. She’d spent the previous night at a party while Laura hemmed and pressed. Making contacts, she said. More like making hay. Laura had no idea who Ruby was seeing, but her sister had been scarce enough over the previous weeks to really piss Laura off. Ruby always cited her lack of skills and general fatigue, but the upshot was that fifty-hour weeks were not going to cut it. Fifty-hour weeks in their position weren’t going to put the show on the runway. That was work/life balance, also known as luxury living.

Laura glanced into the audience and noticed that Jeremy was gone. A second later, the salty smell of his skin tingled her nose, and she felt him behind her.

“That was the last group,” he whispered. “Where’s the Hudson?”

Laura glanced back. The Hudson was still on the rack in all its shimmery last-dress-of-the-show glory.

“You have to keep on these women,” he added.

She looked at his coffee eyes and unshaven cheeks, and knew it was no small thing for him to come up to Central Park to see her show. His own show was in three days, and he was undoubtedly working the same hours she’d been. His dark hair was mussed and needed to be cut, not that it wasn’t perfect, but it looked the way it usually did the days before a show. She missed those weeks from seasons past, the two of them quietly pinning garments and scoring patterns while the rest of the city slept. She used to bathe in the smell of him, the sound of his voice, the tilt of his neck, until it all changed, and she had demanded an apology from him for counterfeiting his own work. It took two months, and he did, grudgingly stating that though his side business never impacted her directly, it did indirectly because he was using her patterns to lie to people. Then she’d admitted that he was recreating his own work, and that he paid for the patterns with her salary, and they called a truce.

The giraffes brushed by, coming in from the finale like a bus unloading. But there was no finale. Laura scanned the girls. They were all the same, but different in enough small ways that the Hudson wouldn’t fit them. Any one of them could have been fit for that goddamn dress, but Ruby had insisted on Thomasina, her new best freaking friend. The lights flickered, and the music changed.

Which girl? She cast an eye on Rowena, and her mind ticked off measurements and shapes. Close. Close enough by a quarter inch in the bust and an irrelevant bicep shape from working out with free-weights.

She grabbed Rowena and pulled her to the back of the line.

“Send them out!” she shouted, and Jeremy herded the girls out for the final walk.

Rowena, understanding what was happening as if she’d read Laura’s mind, hurled herself into the dress as if wrestling it into submission. The eight pewter buckles of the bodice clicked as she stepped in. Laura pulled them tight, flattening the model into a tube only slightly wider than a drinking straw.

Rowena wore a pair of high-heeled elf shoes that added the right note of whimsy to the wool crepe dress. But with the Hudson gown, they were wrong, wrong, wrong. Laura checked under the rack for the hematite platforms that went with the gown, but they weren’t there. She glanced at the exit. The last girl was on her way out, and Jeremy looked back, making a
hurry up
motion with his hand.

She checked Rowena’s feet. They were a nine-and-a-half anyway. Rowena would never fit into those shoes even if Laura could find them.

“Take them off,” Laura said.

Rowena kicked off her shoes, but that made the dress three inches too long, and the gunmetal beads dragged on the floor.

“Don’t worry,” Rowena said and bolted to the exit. She plowed through two rows of sashaying stick-figures like a barrel rolling down a hill, holding up the front of her dress and whipping the fabric around so it took the light and stayed out of the way of her bare feet, which now looked intended. Laura decided Rowena was one giraffe who needed to be a rock star as soon as possible.