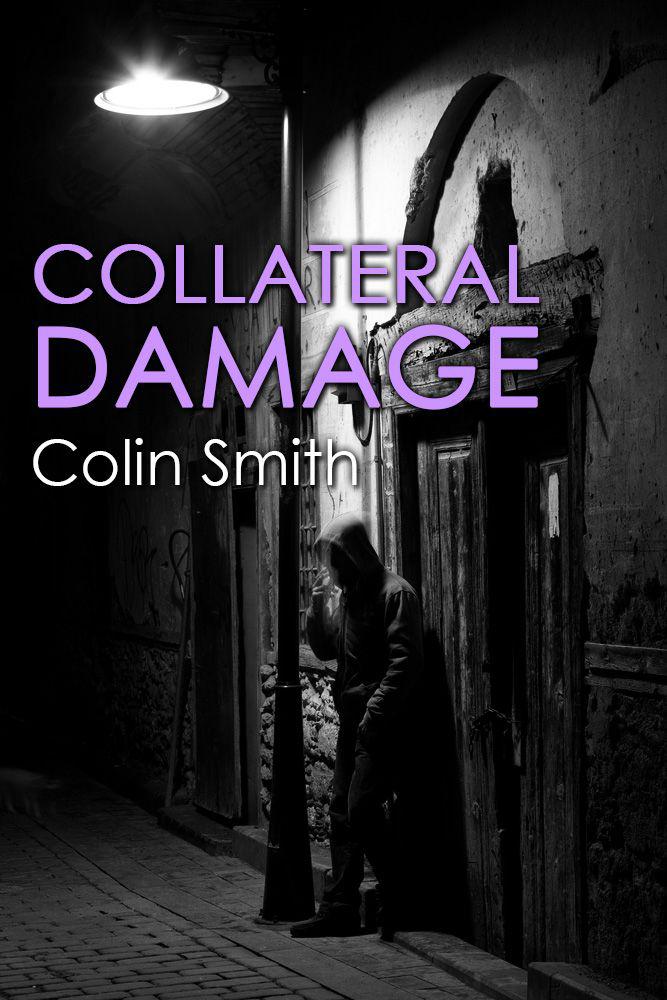 Colin Smith has
asserted his rights under the Copyright, Design and Patents Act, 1988, to be
identified as the author of this work.

For Sylvia, Helena, and
Gavin - with my love

'Baader had the perfidy
to shoot himself in the back of his head to make us look like murderers.'

9. Fitchett and the Funny

12. No Shrines for a Terrorist

Extract from Spies of Jerusalem by Colin Smith

Siegfried Luntze, having told his enemies all they wanted to
know, was being taken out to die. The man he had nicknamed 'Whistler' had informed
him that he was being taken to another house. He badly wanted to believe this, but
could not bring himself to. The very fact that Whistler had bothered to explain
was ominous, a device to ensure he did not make a fuss. By now they must have checked
out what he had told them and there was no further point in keeping him alive. Every
professional knows that the best way to get rid of a body is to make it walk to
its grave.

Whistler was whistling that damn tune again, a sentimental soldiers'
song from the forties.

(Everything passes, One day it'll be over. After
every December, There's always a May.)

Luntze was not ashamed of having talked. Everybody talked in
the end. On the contrary, he thought he had done well, listening to his own screams
with an almost clinical detachment. The beatings administered by the heavies who
had first grabbed him in the street he had taken without a word. It was only when
they started working on his feet with a pair of pliers that he began to give them
the whole truth.

How many were in his cell?

His comrade was called Hans Koller!'

How did they receive orders from their organisation?
Dead-letter-box or cut-out?

What was the keyword of the code to switch to cut-out?

There wasn't one, he said. Orders for a change were delivered
verbally. But in the end, he had told them what it was.

He had some difficulty in walking. The pain had not exactly subsided,
but had become a constant blaze, almost
a numbness
. Two
of them were holding him up, one under each arm. Their gentleness surprised him.
They had replaced the blindfold, gagged him, handcuffed his hands behind his back
and were leading him barefoot out of the room. Since capture the blindfold had been
removed only when he was being fed, and then his guard had always worn a balaclava
helmet and ski-goggles. He had no doubt that this was intended to reassure, to implant
the notion that if they were careful not to show their faces they might intend to
release him.

As far as he knew he had never seen Whistler, not even masked.
He asked his questions in good German, perhaps a German's German, and to judge from
his musical tastes, he was middle-aged. Luntze guessed that he had picked up the
tune in one of the camps. He was fairly sure that his captors were Israelis, another
reason for assuming that they would not hesitate to kill a German fighting for the
other side.

Sometimes he felt that the whistling was intended to put his
nerves on edge. There had been several occasions over the last few days when he
thought he had been sitting alone for what seemed like hours. Then, suddenly, a
few soft bars would announce that Whistler had been there all the time, not saying
a word. On other occasions he would start up when he was waiting for a reply - almost
always the same song - as if it genuinely was a nervous habit.

Another door and the fresh air hit him in the face. He took in
as much as he could through the nose, savouring it. He was sure it was night-time;
they would never risk murder in daylight. His feet touched gravel and he heard a
car door being opened. As they bundled him into the back seat he tried to conquer
fear for a moment by astral planing through the crowded Middle Eastern sky he had
first studied in a training camp in the Lebanon.

There was a metallic click.
A pistol being
cocked?
He was pleased to be blindfolded, already deprived of one of his
senses. Nor would they be able to see the terror he knew he was wearing like a mask.

Hans Koller was waiting for the cut-out to reach him.

The German was on the nursery slopes of middle age, but was one
of those blond men with sufficient hair and little enough belly to pass for twenty-five
- especially when dark glasses hid the creases around the eyes. Normally he shunned
dark glasses as theatrical; today he wanted to check out the other tables.

It was still early spring, but the cafe was already crowded with
the first of the season's tourists ogling the boulevard and grumbling about the
price of their drinks. In another few months, thought Koller, it would become quite
unbearable again: a great nodding sea of
Herald
Tribunes
, blue rinses, plaid trousers secured by white plastic belts with matching
shoes and loud, friendly voices demanding the way to Napoleon's Tomb. Then there
were the Japanese storm battalions. He was watching a phalanx from the season's
vanguard now as they captured a cafe across the road. Nobody sat until the flanks
had been secured and every Nikon cocked and cleared for action.

With the Germans, he found it depended on their age. His lot,
the thirty- to forty-year olds, were mostly embourgeoised slobs forever bitching
about being ripped off. The younger ones were just boring. Complacent, smug, materialistic
... some of them would be Nazis if they had the energy. And it occurred to him that
he probably had more in common with Nazis, who at least believed in something, than
with the lotus-eaters who believed in nothing ... ergo, also his father? Uncomfortable
thought. Koller sometimes wondered if Standartenfuhrer Koller was entirely disapproving
when he saw his son's police mug-shot in a newspaper. Perhaps it occurred to him
that he too was a kind of soldier.

The cut-out was a waiter. The man was working the last two rows,
which was just as well because all the front tables along the edge of the pavement
had been taken when Koller arrived. He wondered if the waiter had been clever enough
to anticipate this. He didn't look very clever. He was a big man with an overfleshed
face,
black hair greased and combed straight back, and
wearing a short white linen jacket too tight across his belly.

Koller sat at a table at the end of a row glancing every now
and then at a copy of
Le Monde
he had
brought with him, waiting for the waiter to bring him the coffee he had ordered.
He wished it was going to be good, light German coffee and not this black French
shit. Good coffee was the only thing about Germany that he missed.

For the second time that day he read an article about the arrest
in Holland of various known left-wingers and liberals - two university lecturers,
a journalist, a trade-union official, a moderate champion of the Moluccan cause
- following a particularly murderous terrorist bomb at a pro-NATO rally in a provincial
town. There were the usual demands for the government to bring in more stringent
anti-terrorist legislation and there was to be an emergency debate in parliament.
Shock waves from the bomb seemed to be demolishing years of liberal tolerance. The
opposition's feeble protests against the mounting backlash were overshadowed by
their anxiety to be seen to be condemning the outrage. Koller knew that the arrested
people would probably soon be released, no doubt with indignant stories of police
brutality during interrogation, because he had a very good idea who was responsible
for the bomb and it certainly wasn't them.

Of course, he could not be certain. It was just a feeling. Two
cells could be operating in the same city practically unaware of each other's existence.
In a way he felt it was a pity that these people had been arrested. They were the
sort of wet liberals who were very useful when it came to funds and safe-houses
and false papers, and something like this tended to antagonize them. He pulled himself
up. You're getting soft, he thought. If the price of the revolution is losing a
few fence-sitting fellow travellers then it's a very cheap one. Christ! If it was
as cheap as that there would be a lot more of them left. He thought of Siegfried
floating in the Seine with a hole in the back of his head and his toe-nails missing.
He lit a cigarette, cupping his hands around the match like a front-line soldier
although there was no wind. He did not know it, but it was a habit he had picked
up from watching his father.

The waiter brought him his coffee, taking it off a tray full
of beers and spirits ordered by his other customers. He put the cup down without
a word and Koller hardly looked up from his newspaper. Only after the waiter had
moved on did he take a sip, grimace, and then remove from beneath the cup the bill
and from beneath that a small folded piece of paper which he put unread into his
jacket pocket. After a few minutes he caught the waiter's eye and paid for the coffee.
The waiter watched him carefully count out the exact amount from his loose change.
He never left a
tip, that
was for the capitalists. A man
should get a decent wage. Besides, the waiter was a fat slob.

From the cafe near St-Germain-des-Pres Koller went to a flat
in an expensive apartment block on the Quai d'Orsay. Here he sat at a low coffee-table
in a living room cluttered with books and expensive prints, and read the note that
had come with his coffee. Although the message consisted of no more than sixty words
he read it several times. Eventually he set fire to the paper in a little copper
ash-tray and beat the ashes into a fine powder with a pen. Then he telephoned Air
France and asked about flights to London.

This was the tricky bit, setting the clock. The woman was standing
at the half-open door. Koller could feel her presence rather than see her. 'Go away,'
he said without turning round. He heard the door shut, but didn't look up from the
low bed at which he was kneeling like a child saying his prayers. All his concentration
was focused on the items laid out on newspaper on the bedspread: a big brass double
alarm clock; plastic explosive still wrapped in its brown greaseproof paper; a radio
battery, detonator, wires and an ordinary clothes-peg.

Fear to Tread by Michael Gilbert
Sixth Sense (A Psychic Crystal Mystery) by Baron, Marilyn
Emperor: the field of swords E#3 by Conn Iggulden
Prayer for the Dead by Wiltse, David
Deep in the Darkness by Michael Laimo
What if I Fly? by Conway, Jayne
ALL THINGS PRETTY PART TWO by M. Leighton
He's Scared, She's Scared: Understanding the Hidden Fears That Sabotage Your Relationships by Steven Carter
Rekindling the Spark by Hollister, Bridget
Hollow (Hollow Point #1) by Teresa Mummert
Our partner