‘Well that
was
hell on Earth for me!’ Jack uttered as they now all began to laugh and shake their heads.

‘Well it
was
!’ Jack added indignantly. 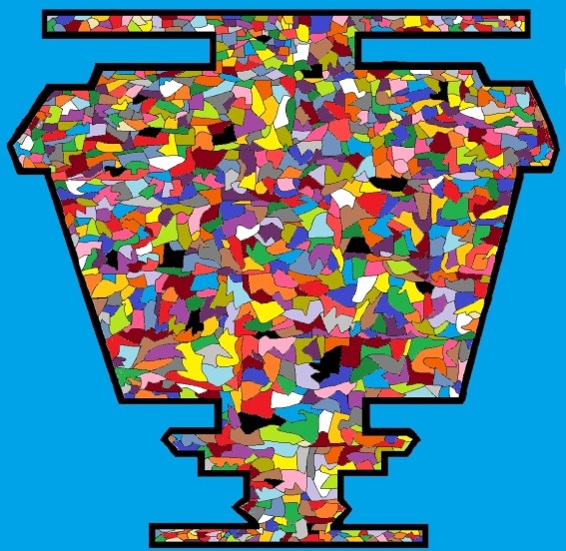 News of the Missile

N
ews of the missile strikes were eventually flashed all around the world, as every different country’s satellite tracking systems quickly reported seeing the missiles heading for California. Rumours now quickly began to spread that the United States of America was under attack!

Unknown to
the media however, was that the President had already notified the leaders of as many countries as he could of the pending missile strikes, so as to prevent any talk of a ‘World War Three’ breaking out.

All around the world
, on television and radio though, all other news was completely cancelled as the missile strikes on California dominated the news as all kinds of speculation as to the reason behind them soon began.

I
n Washington, hoards of news reporters were now virtually camped outside the Whitehouse as they waited for the President to issue a formal statement. Whilst riot police struggled to maintain public order now as crowds demonstrated not only in Washington, but in cities all around America.

Many world leaders were now growing imp
atient as increasing distrust and tensions between different nations soon began to surface. So the President now knew he would have to offer some explanation for what had happened on American soil and do so very quickly.

A
statement was rapidly issued by the Whitehouse asking for everyone to remain calm, as the President would offer a full explanation for the previous day’s events later that afternoon. 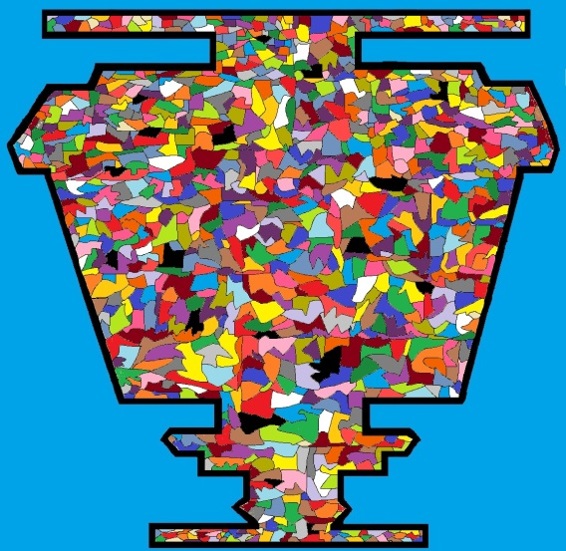 T
here was uproar upon the President’s appearance upon the podium in the Whitehouse press room, as reporters from various countries all immediately fired questions at him!

The President though, just held up his hands and appealed for calm.

He then read out the most historic statement ever made by any American President.

‘Ladies and Gentleman of the press, my fellow
Americans, and people of the world, I am sad to inform you that mankind is under attack’ he calmly informed them all.

There were now
instant gasps of astonishment all around the press room, as reporters immediately began firing off questions all over again, as the President raised up his hands and appealed for calm again and wouldn’t continue until he obtained it.

‘I would like to stress very strongly that America is
not
under attack from any other nation’ he added quickly in an attempt to defuse any rumours circulating around to the contrary.

He then pointed to a large television screen that had been set up behind him.

‘
Ladies and Gentleman, the film I am about to show you is not a hoax, it is the reason why we launched the missiles we did and the real reason California has been without any power now for so long. I would hope the people of America will forgive me for keeping this from them, but it was hoped we could tell them about this crisis, once we had found a solution to it’ explained the President before waving for the very carefully edited film taken from Jack’s airship to be shown to them all.

The press conference went out live so people all over the world were now glued to their television sets
, computers, mobile phones and headsets as they just wondered what the President was about to show them.

It was night time in many parts of the world
, but people had even got up in the middle of the night just to hear what the President would say.

All around the world
people now stopped working to stare at their television screen or stop in the street to listen to their radios or watch the President on their mobile device.

As the film began
, there were now audible gasps of horror all around the Whitehouse press room as the President began to explain;

‘Unfortunately, these creatures
, we have named the ‘Migrators’ due to their similarity to one of our migrating locusts, has proved completely impervious to anything we have so far thrown at them’ admitted the President. ‘We have been able to kill some of them through old fashioned means, but not enough to win any war against them’ the President now openly admitted. ‘These creatures have technology we simple can’t explain, that renders our electricity, gas, and even igniting any flame impossible. This means all our modern weapons have proven completely useless against them’ explained the President to the room of now completely silent and totally stunned looking reporters.

‘I will now take some questions’ the President concluded as there was an explosion of questions now coming from all around the room.

‘Is this some kind of joke, Mr President?’ asked one reporter from the New York Times.

‘Herbert, I wish it were’ replied the President
as he recognised him.

‘But where did these creatures
come from?’ asked another reporter.

‘Truth is,
Hank, we don’t know’ admitted the President as he recognised the chief reporter from the USA Today newspaper. ‘They may have come up from bellow the ground or even from outer space. The truth is, we don’t know. All I can tell you is, they are not human, but are more insect like’ he informed them all.

The President then waved his arm for the next carefully edited close ups of the Migrators showing their sheer numbers
, how high they can jump and how fast they can run.

‘But what on earth are they?’ asked another stunned looking reporter.

‘We are calling them the
‘Migrators’ after an idea pounced upon by General O’Dowd’ explained the President.

‘Is General O’Dowd in charge of operations against these creatures?’ asked another reporter.

The President
now seemed to take a deep breath before answering.

‘I am sad to tell you that General O’Dowd and an army he put together of tens of thousand of m
en are all missing in action’ he uttered sadly.

‘But what happened to them? Had this something to do with the crude looking weapons
recently leaked onto the internet?’ asked another reporter.

‘In a word
yes
’ replied the President as there were now even more audible gasps of amazement. ‘These creatures are somehow able to prevent our electricity from working and any flame from igniting, consequently our missiles simply impacted upon the ground, our guns and weapons simply don’t work and all our experiments with chemical, germ, gas, or even insecticidal type weapons and all other options have all so far failed us’ admitted the President. ‘The large missiles I know many countries tracked from around the world were a last resort at destroying these creatures, but they too failed’ the President explained. ‘They simply all impacted upon the ground. The only way we have found to kill these creatures, is with a mechanically powered device that fires huge reinforced steel tipped arrows, but we can’t fire enough to defeat them it would seem’ explained the President ‘due to their sheer weight of numbers.’

‘But then
, how can we defend ourselves against them?’ a very scared looking female reporter inquired.

‘The truth is
we
can’t
’ admitted the President. ‘We captured one creature alive, but as we soon discovered, even when dead, no electrically operated piece of equipment works in their presence. So we soon found any proper examination impossible, as we cannot run tests on any equipment anywhere near any part of their body, or any blood that has seeped from it either’ explained the President.

‘Can we stop them then?’ queried another reporter.

‘Not yet’ admi
tted the President ‘we are experimenting on other equipment right now, but there is no guarantee anything we invent will ever work against them.’

‘But how big are these things?’ another question came in.

‘They vary, a bit like us, some though are over seven feet tall
, but the average is over six feet’ explained the President.

‘But w
here are they now? Can they spread all over North America?’ asked another reporter, looking very alarmed.

‘There is no questi
on they couldn’t cover the entire Earth if we cannot stop them here’ the President told them honestly, to now loud gasps of shock!

‘
Gentleman and Ladies, I’m sorry to tell you this, but this is not just America’s problem, for if they conquer here, they will then look to move elsewhere. Therefore I am appealing for all the nations of the world to set aside their grievances to find a solution that will defeat these creatures!’

All
the reporters now looked deeply shocked as they all began to fire in questions all over again.

‘Is it really
that
bad?’ asked another reporter.

‘Yes,
John, I’m afraid it is’ the President informed a reporter he knew from the Times newspaper in London.

‘But we’ve seen no evidence of these thi
ngs, so how can you expect us all to believe you?’ asked one reporter from the BBC looking rather sceptical.

‘We will soon show you another film in private that will convince you’ explained the President.

‘Why in private?’ asked the reporter.

‘Because it is not suitable for public viewing’ explained the President.

‘But what are
you doing to try and get civilians out of the affected area?’ asked another reporter.

‘I’m afraid t
he Migrators have some sort of invisible fence both hiding their presence from anyone outside, but also disintegrating anything trying to leave’ the President explained.

‘Does that include people?’ asked another reporter.

‘I think we have
to believe so’ nodded the President. ‘Certainly, no one sent into the area such as the electrical engineers from the outset because of the power cuts, have so far reappeared again outside.’

‘What
’s happened to these people trapped in the area where they are then? Have they all been killed?’ asked another quite stunned looking reporter.

‘The truth is
, we don’t know’ the President shook his head.

‘Then
people are all trapped inside that area with all these creatures?’ someone else asked incredulously looking very shocked.

‘Yes’ admitted the President
as everyone gasped in horror. ‘This is why General O’Dowd bravely led his army inside and why, when that strategy failed, we even resorted to launching nuclear missile strikes against these things’ explained the President ‘but nothing seems to work against the Migrators’ he openly admitted.

The President then seemed to take a big deep breath.

‘I feel it is my duty to inform you al
l that one of the nuclear devices developed a fault and actually fell some fifty miles outside the dead zone area. It unfortunately demolished a house, but there were no casualties.’

There was an absolute explosion of complaints and questions now
, as the President held up his hands to calm everyone down once again.

‘Everyone is safe
, there is no fear of any nuclear fallout’ the President quickly explained.

‘But how can that be?’ someone immediately asked.

‘It would seem that the Migrators can even defuse our nuclear warheads outside their
own dead zone area. It demonstrates clearly they want the Earth ‘intact’ and free from any nuclear fallout. Our experts have collected the remains of the missile now. It has been made safe in a way we cannot yet even comprehend’ the President explained. ‘We have invited scientists over from as many countries as we could to examine all the evidence we have, even those from countries we have previously had conflict with. As you see Gentleman, this is not just America’s problem, it is the entire world’s problem’ the President insisted seriously.

Muchacho by Louanne Johnson
Twisted Fate (Orc Destiny Volume I) (The Blood and Brotherhood Saga) by Laszlo, Jeremy
Stepbrother Jerk by Natasha Knight
Willie by Willie Nelson
Panama by Shelby Hiatt
Love Came Just in Time by Lynn Kurland
Shining Water 01 - The Icecutter's Daughter by Peterson, Tracie
The Grays by Strieber, Whitley
His Name Is Sir (The Power to Please #3) by Deena Ward
Repulse: Europe at War 2062-2064 by Chris James
Our partner