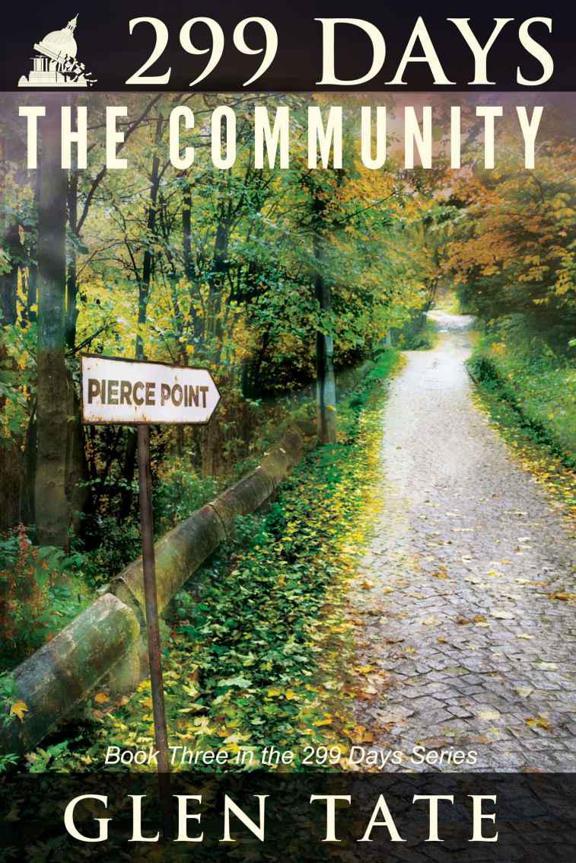 Prepper Press is a division of Northern House Media, LLC

-
To the real "Morrells" and "Colsons," who are the best neighbors a guy could have.

299 Days: The Community
, the third book in the
299 Days
series, reunites Grant Matson with his family after his wife, children, and in-laws accept that the only way to survive the Collapse is to flee the comfort of their suburban lives and join him at his isolated cabin in the woods. With riots becoming more violent, power outages more widespread, and the military crumbling, Grant and others throughout Washington State realize they must organize if they want to endure.

From the secure confines of the relocated state capitol building, to a rural self-sustaining farm, to the developing community of Pierce Point,
299 Days: The Community
explores the mental, emotional, and physical changes everyone must make to adapt to a collapsed society.

The years of preparing and training position Grant to lead Pierce Point as he begins to navigate complex interpersonal dynamics and unpredictable situations to help build a new community that can withstand the threats closing in on them.

Will people join forces or stand alone? Can communities successfully organize themselves in times of chaos? Will what is left of government help those who cannot help themselves? And if so, at what cost?

From Chapter One to Chapter 299, this ten-book series follows Grant Matson and others as they navigate through a partial collapse of society. Set in Washington State, this series depicts the conflicting worlds of preppers, those who don't understand them, and those who fear and resent them.

For more about this series, free chapters, and to be notified about future releases, please visit

Books from the 299 Days series published as of November 2012:

Glen Tate has a front row seat to the corruption in government and writes the
299 Days
series from his first-hand observations of why a collapse is coming and predictions on how it will unfold. Much like the main character in the series, Grant Matson, the author grew up in a rural and remote part of Washington State. He is now a forty-something resident of Olympia, Washington, and is a very active prepper. “Glen” keeps his real identity a secret so he won’t lose his job because, in his line of work, being a prepper and questioning the motives of the government is not appreciated.

Car Wheels on a Gravel Road

Off in the distance, Grant heard the unmistakable sound of car wheels on a gravel road. There was a low rumble with the crackle of the tires on the crushed gravel. Then he heard a radio crackle. It was one of those little Motorola ones Grant used in the Cedars. Paul had it on his belt for his turn doing the watch.

It was John. “We have visitors. Lots of them. Come quick.” They jumped up and headed toward the guard shack. Chip had an AR and Paul had a shotgun. Mark had his revolver and Tammy was unarmed. All Grant had was his pistol, which was always on him. His AR was in the cabin.

He was scared to death. “Visitors…lots of them,” sounded like a motorcycle gang. It was only about 100 yards to the guard shack. Grant had never run so fast; the adrenaline was pumping.

They ran out onto the road, exposing themselves. Grant and Chip quickly found some cover. Paul, who was winded because he was so heavy, just stood in the middle of the road panting. Mark and Tammy stood by him, helping their son.

John had his 30-30 with a scope aimed down the road. The sound of the cars on the gravel road got louder. They were moving slowly. Was that a good sign or a bad sign? Were they slowly advancing, like professionals?

It was hers! He recognized the license plate. No way!

Grant was elated. He ran up to John yelling, “Don’t shoot. They’re friendlies!” John lowered his rifle and Grant ran down the gravel road toward Pow’s Hummer, and holstered his pistol, which was hard to do when he was running. Pow flashed his headlights. It was them!

Grant ran up to Pow’s Hummer, looked in to make sure it was him, and kept going right past the other vehicles to Lisa’s Tahoe.

He saw her in there. The kids, too! Grant tried to open her door. It was locked. Of course. They had driven through a war zone to get there. She unlocked the door. He ripped the door open and screamed, “Thank God you’re here! Thank God!”

Grant started hugging Lisa. He looked her straight in the eye and said, “There’s the hug I meant to give you the other night.”

She started bawling. The kids were screaming, “Daddy!” They were getting out of the Tahoe and jumping around with Grant and Lisa. Pow got out and watched. He felt a tear roll down his cheek. The other guys on the Team were taking it all in; Grant reunited with this family and all the great cabins and the beautiful scenery. Pow had told them this place was great. He wasn’t kidding.

The next hour or so was a blur to Grant. Drew and Eileen were crying, too. Grant was just running around showing all the cool stuff off at the cabin that would allow them to make it. Make it as a family. Things like the guard shack, and telling them about fishing, Mary Anne’s canning, the nightly BBQs, the neighbors, and introducing the Team to the neighbors. It reminded Grant of his bachelor party, which had all of his friends from the various phases of his life. Grant was the one guy all the guests had in common. They didn’t all know each other, but they all knew Grant. He was the common thread, and all his friends were in one place. It felt great.

Grant was mad at Lisa for not coming out to the cabin earlier, for not being thrilled about getting the cabin, and for not understanding, let alone approving, of his prepping for what had happened. He had been right the whole time and she had been fighting him the whole time.

Lisa was mad at Grant for abandoning the family and leaving them in danger. Just taking off for politics. For being part of the WAB troublemakers instead of living a normal life. For not being a normal lawyer living in a normal subdivision and enjoying normal things, like golf. No, Grant had to be a terrorist and live out in the woods somewhere. He had been so worthless around the house for so many years and now he was Mr. “Let’s Go Live Out in a Cabin”?

So, after about the first hour, things got tense between Grant and Lisa. They both kept telling themselves that they were together and safe and that’s all that mattered, but they both couldn’t help wanting to say to each other, “this worked out despite all the stupid shit you did.”

It was like an old wound. Like scar tissue. There had been wounds from the past. They were healing, but the scar tissue was there and the injury was still tender. Grant and Lisa felt themselves falling into their old debating routines with each other; Grant being pissed that Lisa didn’t support his prepping and Lisa being pissed that Grant had caused so much trouble for the family.

The hug. This is just like the hug. Don’t make the same mistake again, Grant told himself. “In marriage, it’s better to be happy than to be right,” Grant remembered his Grandpa telling him. The scars needed to heal for good. No more of that. Grant and Lisa didn’t have the time or the luxury of bickering about who was right. They had to pull through as a family right now. Bickering and being “right” could get them killed. At a minimum, it would make them miserable out in the boonies with nothing to do but argue. No. That was done.

“Honey, I’m sorry for all that’s happened,” Grant said when no one was around. “We need to get along out here, and I’m willing to do whatever it takes to make that happen.” He held his arms out for a hug.

Lisa was reluctant. She knew that hugging him meant the argument was over. She wanted to tell him what an asshole he was. She wanted to tell him how much harder life would be out here without all her stuff, but she was tired. She was sick of all the fighting. She’d had the most stressful day of her life today, and wanted to have a husband again. Maybe not the “normal” suburban husband she had before all this. But her husband. He wasn’t so bad, after all. He had prepared a safe place for them with all they needed. Maybe not all they wanted, but all they needed. He was kinda cute, too. He was the love of her life, even though she still had no idea why.

She hugged him. It was warm. It was soft. It felt like home. Not a house kind of home. But the comfort of being with the ones you love. She still wouldn’t say she was sorry; he would figure out she was because she was hugging him. That’s all he would get. After all he put her through, an out loud “sorry” was not going to happen. He’d put up with it. He always had.

Grant felt like things were complete. His family was supposed to be here. They would be able to be a family again. They could walk the beach and have campfires and do all the things he thought they would be doing when he first got the cabin, before Lisa decided that she would hate the place. It had been a horrible couple of years of Lisa hating the cabin, the economy tanking, and the country collapsing when no one would listen to him. Chalk it up to a horrible couple of years. Maybe the worst they’d ever have.