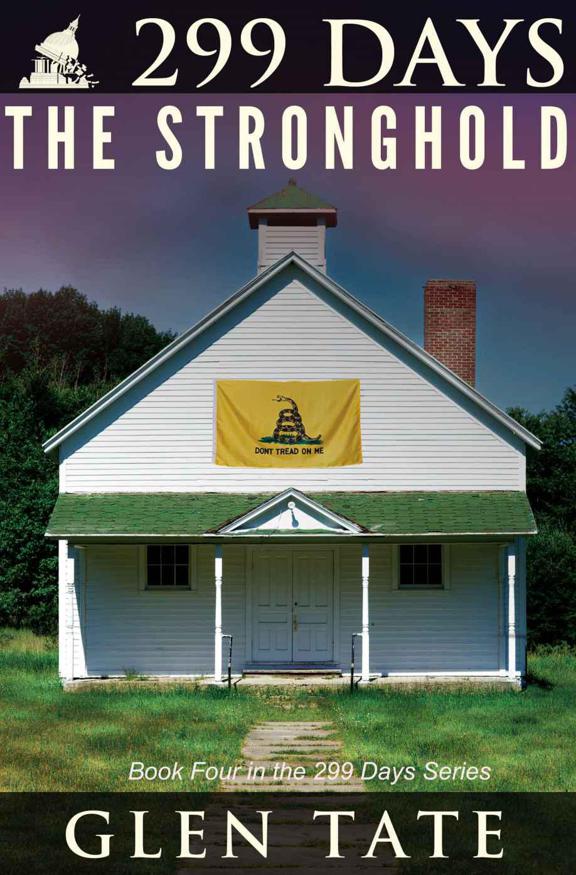 Prepper Press is a division of Northern House Media, LLC

-
To the real "Rich Gentry," who got shafted by the Man in real life for trying to expose corruption.

299 Days: The Stronghold
, the fourth book in the
299 Days
series, Grant Matson begins teaming up with others who will help the community of Pierce Point become a Patriot stronghold, ready to stand against government Loyalists, the Undecideds and the Oblivious. Using the United States Constitution as their guide, they develop a sense of order and begin planning for a future that shows no sign of improving.

Outside of Pierce Point, the country continues its downward spiral. The Feds are rationing food and gas and playing favorites while some states are choosing to “opt out” of the Federal Government. Scrappy street gangs have made way for sophisticated white collar gangs who, along with government officials, participate in bartering and bribery of every kind. Vigilantes are loose everywhere, and those working for what is left of the government don’t know if they’re with the good guys or bad guys.

The Pierce Point Patriots prepare to defend their land, their families, and their beliefs, even if that means going up against those in their community who are loyal to the government and all things that led to the Collapse of America.

From Chapter One to Chapter 299, this ten-book series follows Grant Matson and others as they navigate through a partial collapse of society. Set in Washington State, this series depicts the conflicting worlds of preppers, those who don't understand them, and those who fear and resent them.

For more about this series, free chapters, and to be notified about future releases, please visit
www.299days.com
.

Books from the 299 Days series published as of November 2012:

Glen Tate has a front row seat to the corruption in government and writes the
299 Days
series from his first-hand observations of why a collapse is coming and predictions on how it will unfold. Much like the main character in the series, Grant Matson, the author grew up in a rural and remote part of Washington State. He is now a forty-something resident of Olympia, Washington, and is a very active prepper. “Glen” keeps his real identity a secret so he won’t lose his job because, in his line of work, being a prepper and questioning the motives of the government is not appreciated.

The 7:00 p.m. meeting at the Pierce Point Grange did not last long this time. They had gone over everything important the night before. The only new topic tonight was the beach patrol. The gate was the main way for people to come and go into Pierce Point, but the beach was a pretty big area, too. It was still possible for someone to take a boat across the water and land on the beach, go into Pierce Point, steal or kill or whatever they wanted to do, and get back to their boat and escape. It was not out of the question that bad guys could do this, though it was less likely than them trying to drive or walk in at the main gate. Therefore, there still needed to be a security plan.

A retired Coast Guardsman who lived out at Pierce Point, Shane Eaton, was the natural choice to head up the beach patrol. He was a Master Chief Boatswain’s Mate, a guy who spent thirty years running small craft and working on maritime security and rescue. His last station was Seattle and he retired in Pierce Point.

Master Chief Eaton, who everyone called “Chief,” was glad to be needed again. The past four years of retirement had been hard on him. He spent the years fishing and running his boats around the inlet, but he missed the action. He loved saving lives. The military part of the Coast Guard—boarding ships, maritime law enforcement, and the “gun side” of the Coast Guard—never appealed to him much. He was a boat guy, but he could see that with all that was happening that there was a need for the “gun side.”

Several men and one woman volunteered for the beach patrol. They were experienced boaters and lived in houses and cabins on the beach, which gave them a personal stake in the security.

Paul also raised his hand when the call for volunteers went out for the beach patrol. He had been boating the waters around Pierce Point since he was a boy. He knew the tides well and loved being on a boat. He figured he could finish up his work fabricating the gate and then work with Chief on the beach patrol.

There weren’t many new people showing up at the meetings. Some people who didn’t show were likely sitting at their homes in denial about all that was happening around them. For others, it could have been about the gas. Gas was scarce, and the Grange was at least a mile from most people; it was up to three miles from some. It appeared that a few regulars would attend the meetings and then report back to their neighbors.

It was 7:45 p.m. and the Grange ladies were making dinner for the guards and the Team. Grant had this overwhelming feeling that he needed to talk to Rich about politics, and about turning Pierce Point into a Patriot stronghold. He thought it was still far too early to start talking to the residents of Pierce Point about this, but Rich would be ready. After all, his plan was to first get people on a solid footing to survive and then work on them slowly so they turned into Patriots without even knowing it. Talking to Rich so early in this was contrary to Grant’s plan of slow and silent politics, but Grant knew he needed to do it soon. He was learning to trust these instincts, even when they seemed crazy.

As they were eating a great home cooked dinner—which seemed to taste even better given how hungry they were after a long day of physical activity—Grant came up to Rich.

“Hey, man, I need to talk to you,” Grant said. He looked around to see if anyone was listening. “Us alone,” Grant said. “It’s not bad news. In fact, I think it’s good news. You drink?”

“OK, I’ll stick around after everyone leaves and we can have a drink,” Grant said with a smile.

Grant had kept a bottle of his favorite whiskey, Pendleton, out at his cabin. It was a cowboy whiskey they drank in eastern Washington. He first had Pendleton about two years before, when he was visiting with an outspoken state legislator and Patriot leader, John Trappford, at his ranch where they hunted coyotes. Grant and Senator Trappford sat outside for hours on a beautiful night and, over most of a bottle of Pendleton, both came to the conclusion that the state was collapsing.

Grant remembered that conversation because Trappford had said, “This state will collapse. Soon. It’ll be ugly.” This was coming from a legislator, a guy with inside information and someone who had a stake in things not collapsing. And even he knew a collapse was imminent. That conversation just cemented Grant’s own feelings that it was coming. Grant wondered if Trappford had been put in jail yet, but he couldn’t think about that now. He had things to do in Pierce Point.

That morning, in anticipation of this conversation with Rich, Grant had put his bottle of Pendleton in his day pack and kept it in Mark’s truck. He went and got it, and then came back to the Grange and just sat quietly for the first time in days. It felt a little weird to be relaxing. There was no crisis to fight right that minute. Grant almost felt guilty for relaxing. But, with a full stomach after a long day and a bottle of Pendleton ready to go, he got over the guilty feeling pretty quickly and prepared for a good night. He looked forward to this conversation with Rich because it was important business.

Once Rich was done talking to people and arranging for the guard shifts, the Grange had cleared out and he and Grant were alone. It was strangely quiet there. Rich looked tired. He looked frazzled, like people had been talking to him non-stop for days, which they actually had.

Rich sat down by Grant and said, “So what is it we need to talk about?” He was a little apprehensive that Grant wanted to have a private conversation.

Grant pulled out the bottle of Pendleton and smiled, which made Rich even more apprehensive. What kind of a conversation required whiskey?

Grant had a glass for each of them. He poured a shot in each glass. Grant said, “Rich, I feel like I don’t even know you. We’re going to be working together until this whole shit storm is over so I wanted to have a drink with you. It’s the best way to get to know someone.”

“Yep, I was thinking the same thing,” Rich said. He, too, would be trusting his life to this Grant guy; he might as well find out about him over a few drinks.

Over the next hour or so, and several more shots each, they talked about their families, their former careers, their hopes for the future that had been ruined by the Collapse, and then finally, their hopes for Pierce Point.

“My basic goal out here,” a very buzzed Grant said, “is to survive and for my entire family to make it. Everything after that is just icing on the cake.”

“Me, too,” said Rich, also buzzed. “I’m not any kind of hero. I’m just a guy who has some experience keeping people safe, and I know people out here. Running the security here just came naturally.”

“Rich, I want to propose that we have a plan for doing more than just surviving out here,” Grant said.

This is what the conversation is all about, Rich thought.

“What do you have in mind?” Rich asked.

“You’re an Oath Keeper, right?” Grant asked, even though he already knew the answer.

“Yes, I have been for over four years. From what I’ve gathered you’re some kind of Patriot lawyer or something,” Rich said. “Patriot” and “lawyer” sounded strange in the same sentence.

“Yep,” Grant said. “I’m POI. Guess that’s something to be proud of,” Grant said with a smile. It was a warm smile from a guy with several shots of whiskey in him.

“Let me get right to it, Rich,” he said. “I want to guide Pierce Point into becoming a Patriot stronghold.” He let that sink in a while. He was watching for Rich’s reaction.

Rich sat and thought about it. “How do we do that?” he asked.