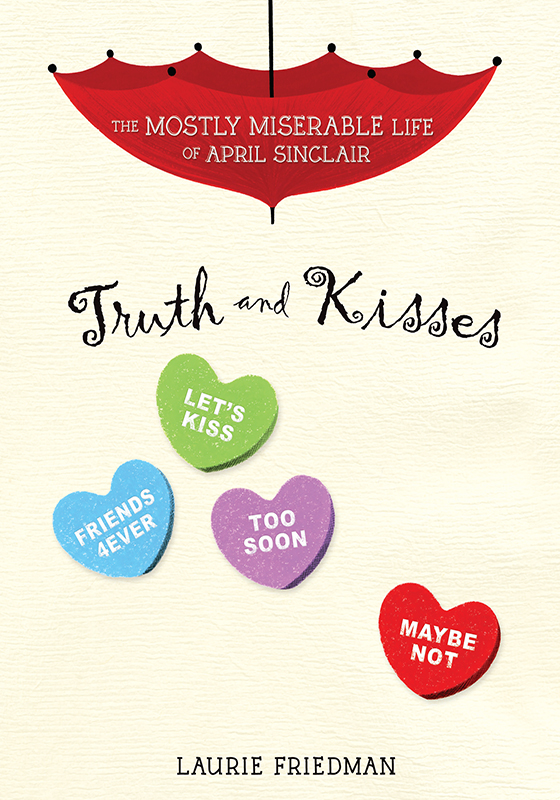 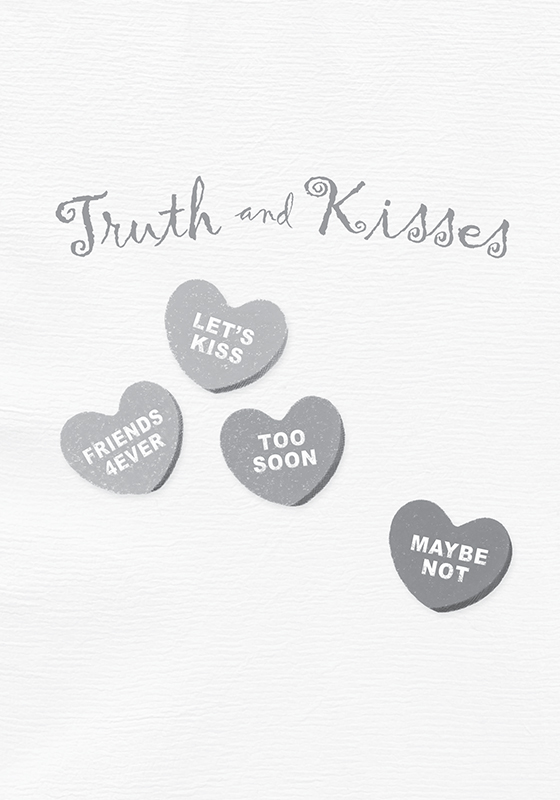 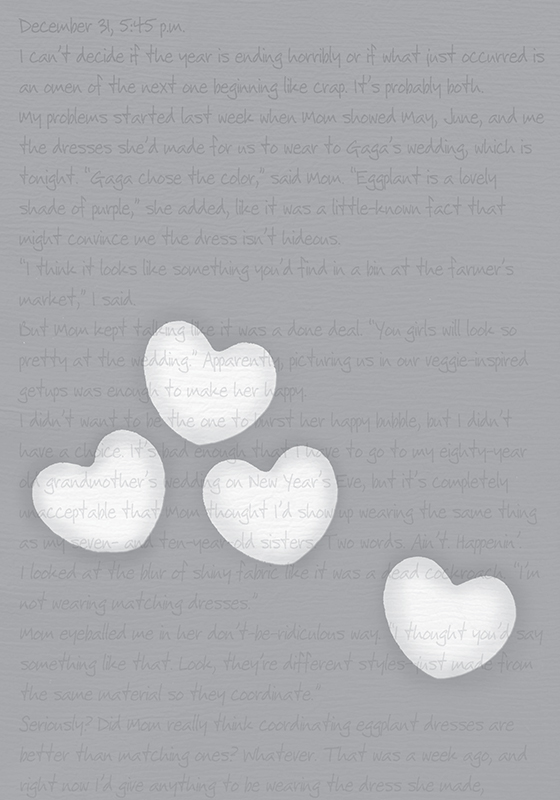 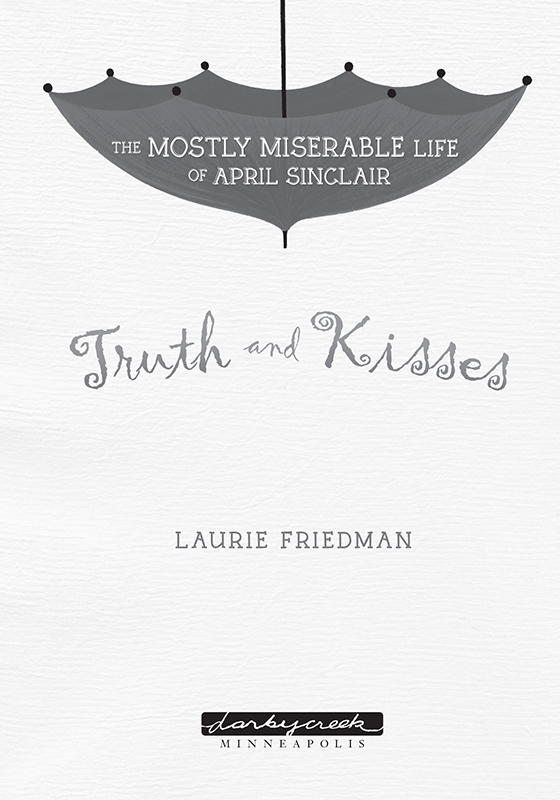 Summary: Diary entries reveal thirteen-year-old April Sinclair's complicated best-friend/love triangle, her new friendship, a busy dance team schedule, and a closer relationship with Matt Parker that surprises her and everyone else. 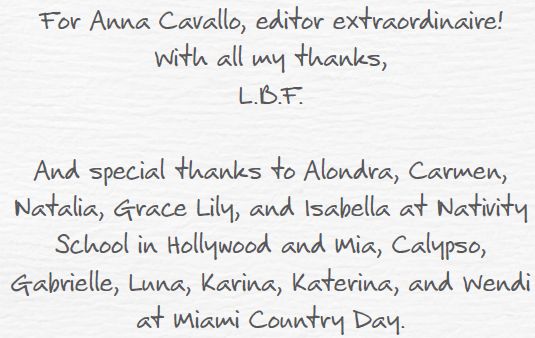 We don't know where it will lead. We just know there's something much bigger than any of us here.

I can't decide if the year is ending horribly or if what just occurred is an omen of the next one beginning like crap. It's probably both.

My problems started last week when Mom showed May, June, and me the dresses she'd made for us to wear to Gaga's wedding, which is tonight. “Gaga chose the color,” said Mom. “Eggplant is a lovely shade of purple,” she added, like it was a little-known fact that might convince me the dress isn't hideous.

“I think it looks like something you'd find in a bin at the farmer's market,” I said.

But Mom kept talking like it was a done deal. “You girls will look so pretty at the wedding.” Apparently, picturing us in our veggie-inspired getups was enough to make her happy.

I didn't want to be the one to burst her happy bubble, but I didn't have a choice. It's bad enough that I have to go to my eighty-year-old grandmother's wedding on New Year's Eve, but it's completely unacceptable that Mom thought I'd show up wearing the same thing as my seven-and ten-year-old sisters. Two words:
Ain't. Happenin'.

I looked at the blur of shiny fabric like it was a dead cockroach. “I'm not wearing matching dresses.”

Mom eyed me in her don't-be-ridiculous way. “I thought you'd say something like that. Look, they're different stylesâjust made from the same material so they coordinate.”

Seriously? Did Mom really think coordinating eggplant dresses are better than matching ones? Whatever. That was a week ago, and right now I'd give anything to be wearing the dress she made, because what I'm currently wearing is so much worse. Thanks to May, a “last-minute wardrobe change” (Brynn's phrase) was required.

Brynn made it sound glamorous, like something that might happen on a Hollywood movie set, but it wasn't like that. When Brynn came over this afternoon to help me with my hair and makeup (which I was happy about because she's awesome with both), I asked May to get the curling iron out of her room and plug it in.

Brynn and I went in the bathroom, and she got out some of the makeup she'd brought over to get started on my face. “I think we should go for smoky eyes and sun-kissed skin.” She applied bronzer to my cheeks. “It'll look good with your dress,” she said.

“Nothing will look good with my dress,” I said.

Brynn made a
hmmm
sound. “We'll make your hair and makeup look so good, no one will even notice the dress.” She smiled at me in the mirror, and I smiled back. Even though she was being her brutally honest self and had just acknowledged that the dress was actually as bad as I thought it was, she was sweet to help me. I knew she was doing her best to be a good friend.

I closed my eyes, and Brynn had just started putting shadow on my lids when we first smelled it. “Is something burning?” she asked.

I inhaled. “Mom must be cooking.” In my family, Dad is the cook.

Brynn continued with mascara. Then she stopped. I opened my eyes and saw her fanning the air in front of her nose. “It smells like it's coming from your room.”

Right when she said that, we heard a blood-curdling screech. And then another.

“APRIL'S ROOM IS ON FIRE!” yelled May.

“APRIL'S ROOM IS ON FIRE!” repeated June, who, I have to admit, for the first time in her life, had finally found something worth repeating.

Brynn dropped the mascara wand, and we ran into my room.

After that, everything spun together. Flames were shooting up from the top of my dresser. Mom ran into my room. Dad wasn't far behind with the fire extinguisher. The next thing I knew, my dresser was covered with charred shreds of eggplant-colored satin, a smoking curling iron, and extinguisher foam. Dad was beside himself. Mom wasn't exactly happy either. “April, how could you leave a curling iron plugged in on top of your dress? You know it's synthetic!” she scolded.

I shot a look at my mom. Who clothes their daughters in material that's a fire hazard? Then I turned to the real culprit. “Why are you yelling at me? May was the one who put the curling iron there.” My parents' eyes fixed on her.

May pointed at me. “April told me to do it.”

My parents looked at June, like they actually expected a seven-year-old to act as referee in this situation. Which she did. “Yeah,” said June. “I heard April tell her to do it.”

Dad slumped down on my bed and clutched his chest like he was having a heart attack. Then the questions started flying.
April, why didn't you check to be sure the curling iron was plugged in safely? April, do you have any idea what could have happened? April, how could you be so irresponsible?
He asked all kinds of questions except the most important one.

“WHAT AM I GOING TO WEAR TONIGHT?” I moaned.

Dad blinked like that was the last thing on his mind.

Mom, to her credit, actually sprang into action. But unfortunately, the answer to my question is a disastrous mix of color-correct items including purple tights, a purple stretchy mini-skirt from sixth grade that I have pulled down as low as possible so my butt doesn't hang out the back, a purple cardigan of May's with a Nick Jr. logo on it that Mom covered up with a fake purple flower pin she made, and some purple felt and curtain rope that she twisted together and wrapped around my waist like a belt. I look like a craft project that just walked out of Michael's. I didn't even have to ask Brynn what she thought. The look on her face said it all.

God help me tonightâsince no amount of makeup will.

Tonight was more like a
Saturday Night Live
skit than a wedding.

Every single female in my extended family was wearing eggplant. My mom and her sisters all had on the same long, flowy dresses. They looked like bridesmaids gone terribly wrong. My cousins Amanda, Charlotte, and Izzy were dressed in eggplant skirts and sweater sets.

When Amanda saw me, she frowned.

“What's your problem?” I asked. But I didn't hang around for an explanation. The answer was obvious.

As I looked around the room, I couldn't believe what I was seeing. The ladies weren't the only ones sporting the color theme. The men had on purple ties that Gaga and her groom, Willy Sherman, had bought online. They were more electric purple than eggplant, and Gaga was upset they didn't match the color swatch she'd gotten, but Willy assured her that they looked like something the British monarchy would wear. I don't know which gossip mags he reads, but I'd never seen Wills or Harry or any other royal wearing anything like that. Gaga and Willy were also in eggplant, from head to toeâfor better or worse (wedding humor). The rest of the room was purple too. Flowers. Candles. Tablecloths. You name it. It looked like someone had projectile vomited grape juice all over the place.

Our family wasn't the only group there to witness my fashion humiliation. All of Gaga's lady friends from the Happiness Movement were there, in eggplant, and so was Willy's family. He actually doesn't have much familyâjust one daughter, who's married and lives in New York City and was there with her husband and their daughter, Sophie.

When Sophie walked in, Amanda came over to me and whispered, “She looks like a super-model.” Amanda's only in sixth grade, but it was an accurate observation. Somehow Sophie actually rocked the eggplant look, if that's possible. “She's probably totally not normal,” added Amanda, whose latest thing is trying to psycho-analyze people.