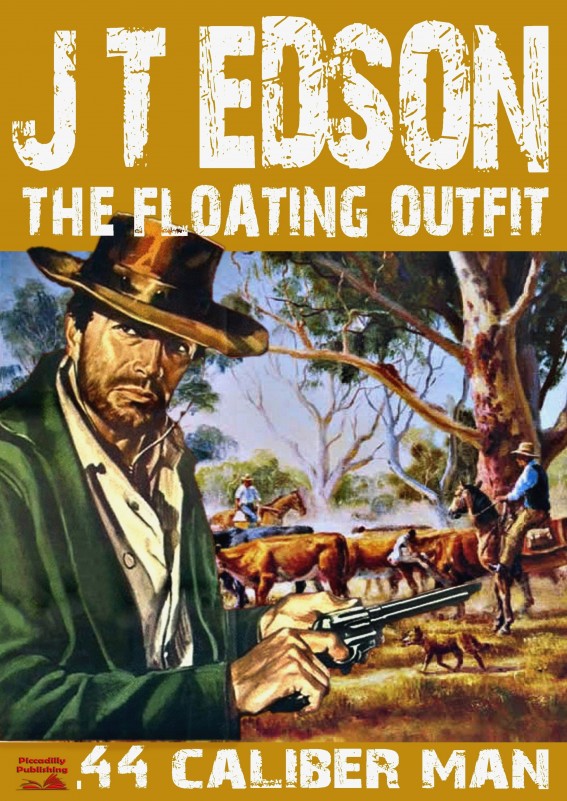 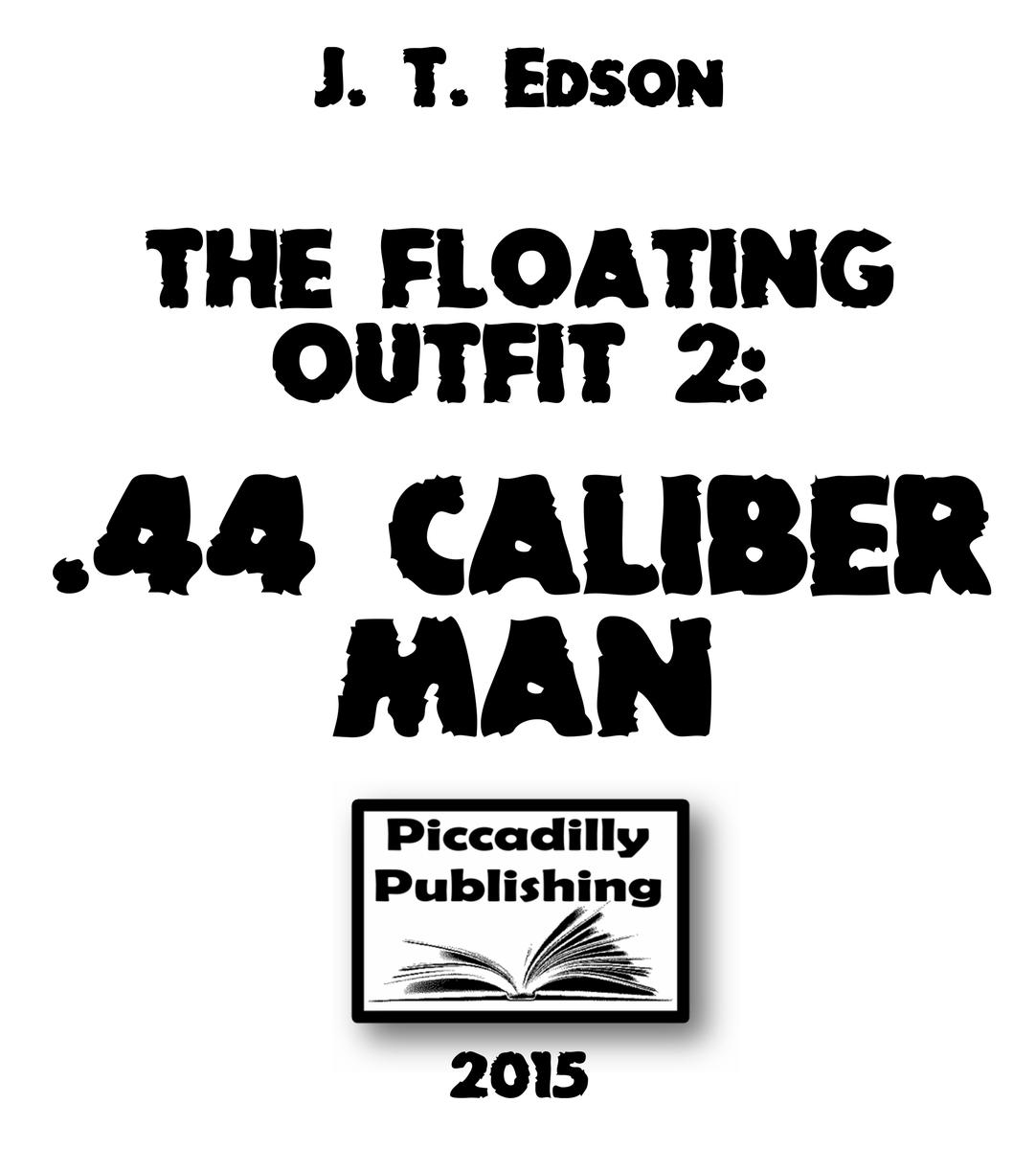 Post-Civil War
Texas is a hell of a rough place. And for a man wearing a kilt, it
is even rougher. Colin Farquharson insists on retaining his native
Scottish dress but to do so unarmed on the Texas frontier could get
him killed. At least it provides a distraction for the bandits
attempting to rob the stage he's on and a distraction is all his
fellow passenger, the Ysabel Kid, needs.

Unfortunately
the leader of the bandits is killed in the process and his brothers
blame Colin and come looking for him. If he's going to stay alive
long enough to impress mustanger's daughter Jeanie Schell, Colin
will have to learn to use a gun and he'll find no better teachers
than the fighting men of the newly formed floating outfit.

Published by
Arrangement with the Author’s Estate.

The eerie flat
slapping sound of a bullet passing close over his head caused Lou
Temple involuntarily to duck it down. Faintly, over the drumming of
his four-horse team’s hooves, the creaking and jingling of the
stagecoach’s harness, almost drowned by the rumble of the wheels,
he heard the crack of a rifle shot. Experience gathered fighting
Yankees during the War Between the States helped him to locate the
man who had fired in his direction.

Even while
looking, Temple prepared to urge the team on at a faster pace. The
bullet had come over the rolling country on the right of the trail
and ahead of the stagecoach, from a distance of at least two
hundred yards. It might easily be the prelude to an attempted
hold-up. If so, Temple hoped to run by the robbers at top speed
before they came closer to the trail.

Sitting
alongside the driver, the guard hefted his ten-gauge shotgun and
also scanned the country to the right in search of the man who had
fired the shot. Being young, ambitious and new to the work, Abel
Simcock hoped there would be a try at holding up the stagecoach in
the course of which he might distinguish himself.

Neither of the
men found difficulty in discovering their assailant. However, the
sight caused Simcock some concern. Deadly as a double-barreled
ten-gauge shotgun might be at close quarters, it was sadly
inadequate over a distance of two hundred yards. Especially when
matched against a rifle. However, if the man who had shot planned
to hold up the stagecoach he had a mighty strange way of going
about it. He stood on a rim in plain sight, waving the rifle in his
right hand over his head. Hanging by its horn in his left hand was
a double-girthed saddle with a bedroll fastened to its cantle.
Dressed in all black clothing, from low-crowned, wide-brimmed
Stetson through bandana, shirt, Levis pants, to his boots, he had a
gun-belt of the same color about his waist. In addition to the
rifle, he carried a revolver butt forward in the holster on the
right of his belt and a sheathed, white-handed knife hung at the
left. Not an unusual armament in Texas during the late 1860s. He
was not masked in any way, but the distance prevented the guard
from making out his features.

Much to
Simcock’s surprise, Temple started to slow down the team instead of
encouraging it to go faster. The guard had heard of drivers working
in cahoots with hold-up men, but Temple did not strike him as being
of that treacherous kind. On the rim, the black-dressed figure
swung the saddle on to his left shoulder and started walking
towards the trail.

‘
That’s a Henry he’s toting, Lou,’ Simcock warned, hefting the
shotgun to a more convenient position. ‘It could be a
stick-up.’

If the driver
felt concern over the approaching man carrying a repeating rifle,
he failed to show it. Hauling back on the reins, he stopped the
horse and raised his right foot to shove home the brake-handle.

‘
Could be winter, only it’s not yet gone spring,’ he told his
guard laconically as the coach came to a halt. ‘Put up the scatter,
you won’t need it.’

‘
He took a shot at us,’ Simcock reminded, making no attempt to
obey.

‘
The hell he did,’ scoffed Temple. ‘If he’d been shooting at
us, either you or me’d have lead in us by now. For Tophet’s sake do
like I say and put up the scatter. That feller’d send a bullet down
each barrel and one a-piece up your nostrils happen you try to
point it his way.’

‘
I wouldn’t be telling you to put the scatter down if I didn’t.
Wonder how come he’s out thisways and a-foot?’

‘
Who is he?’ demanded Simcock, still keeping the cocked shotgun
ready for use.

For a moment
the guard stared into Temple’s leathery sardonic face. Then Simcock
turned his gaze towards the approaching figure. Already he had come
close enough for Simcock to distinguish various details. The
revolver was a walnut-handled old Dragoon Colt and the knife’s
dimensions hinted that it might be of the kind Arkansas blacksmith,
James Black made for Colonel Jim Bowie. According to all accounts,
the man named by Temple carried such weapons.

From the
gunbelt, Simcock raised his eyes to the head under the Stetson. He
saw an Indian-dark face with an almost babyishly innocent cast of
features. Or so he thought until he met the other’s scrutiny. The
red-hazel eyes which studied Simcock were anything but babyish or
innocent. They bore a glint of reckless devilment, having seen
life—and bloody, sudden death.

A stranger to
Texas might have wondered how so innocent a face came to have such
eyes. Simcock did not need to ask, despite his youth and
inexperience as a stagecoach guard. During the past few years he
had heard much about that tall, slim, harmless-appearing youngster
called the Ysabel Kid. Enough for him to set the shotgun’s hammers
into the half-cock position and return it hurriedly to its boot.
While he no longer feared a hold-up, Simcock felt that Temple had
only slightly over-called the dangers of pointing his weapon in the
newcomer’s direction.

Born in the
village of the Pehnane Comanche, the Kid’s father had been a wild
Irish-Kentuckian and his mother the daughter of a Long Walker, war
leader of the Dog Soldier Lodge. His mother had died giving birth
to him and, his father being away much of the time on horse hunting
and later smuggling missions, he was raised as a Comanche.
i
Long Walker had taught him to
read tracks, to be adept at concealment and locating hidden
enemies, how to capture and control horses and all the other things
a Pehnane warrior needed to know. Before he reached his fifteenth
birthday, he had the rifle-shooting skill of a Kentucky hillman and
knife-fighting ability which came from his maternal Comanche-Creole
blood. Not fast with his Dragoon Colt, by Texas standards, he could
still perform adequately when using it.

The War Between
The States prevented the Kid from having to choose between his
white blood and loyalty to the Comanche. At first he and his father
rode with Mosby’s Raiders, their Indian-trained abilities as scouts
being much appreciated by the Grey Ghost. However, the Ysabels’
talents became more urgently needed in their home State. So they
returned to spend the last year of the War transporting
urgently-needed supplies —run through the Yankee Navy’s blockading
squadron into the Mexican port of Matamoros—north across the Rio
Grande. It had been tough, dangerous work, for there were many
people eager to lay hands on the valuable shipments put in the
Ysabel family’s care.

During that
time and after the end of the War, when the work they did once more
became smuggling, the Kid had built up a reputation as a deadly
dangerous fighting man. However, word had it that, since his
father’s death, the Kid had retired from smuggling and gone to work
on Ole Devil Hardin’s great OD Connected ranch.

Not that the
Kid’s smuggling connections caused Simcock any concern for the
safety of the stagecoach or its passengers. As soon as the guard
learned the black-dressed youngster’s identity, he stopped worrying
about the rifle shot being part of a plan to halt and rob the
coach. Except among the men hired to suppress it, smuggling as
carried out by the Ysabels had never been regarded as a crime.
Along with most folks in Texas, Simcock thought of it as a protest
against an unfair infringement of personal liberty imposed by the
Yankee Government.

‘
Howdy,’ the Kid greeted, coming to a halt at the side of the
trail. He looked even younger as a cheery grin creased his face.
‘Got room for another one, Lou? My hoss stepped in a prairie-dog
hole back there a piece and I didn’t cotton any to the notion of
walking down to Fort Sawyer.’

‘
Swing up your saddle, Kid,’ Temple offered. There’s room for
you ins—Hey! You mean you’ve lost your old Thunder
hoss?’

Sympathy showed
on the driver’s and guard’s faces, for the Kid’s big white stallion
had become almost as legendary as its master. However, the Kid
showed none of the distress they might have expected to see at such
a loss. Instead he seemed both amused and annoyed at the
suggestion.

‘
Ole Thunder’s too slick to go stepping into prairie-dog
holes,’ he stated. ‘It was one of my mounts from the
ranch.’

A Texan used
the word ‘mount’ for the horses allocated to him when working on a
ranch. It seemed, from what he had just said, that the rumors
concerning the Kid’s new employment were true. However, Simcock was
given no time to comment on the matter. Climbing on to the roof of
the coach, he reached down ready to accept and secure the Kid’s
saddle.

Having given
all the explanation he, the driver or guard considered necessary,
the Kid approached the coach. He became aware that the passengers
were watching him through the windows. Two were female, a pretty
girl wearing a sunbonnet and cheap coat over a gingham dress and an
older, beautiful, well-dressed woman. Behind them the Kid could see
a handsome young man with brown hair and a trim moustache, but made
out little of how the other was clothed. In fact the Kid paid
little attention to his future travelling companions. Resting his
rifle against the right front wheel of the coach, he prepared to
pass his saddle up to the waiting guard.

Gripping the
cantle in his right hand and still retaining his grip on the horn
with his left, the Kid swung the heavy rig towards Simcock. Once
the guard took hold of it, he realized that there must be
considerable strength in the lean, wiry young frame. Taken with the
bedroll, the coiled Manila lariat, headstall, bit and reins
fastened to the horn, the saddle weighed over fifty pounds. Yet the
Kid had carried it a fair distance and still handled it with
comparative ease. Once he had handed his property to the guard, the
Kid retrieved his rifle.

Pregnancy Plan by Tina Gayle
The Gold in the Grave by Terry Deary
The Good Friday Murder by Lee Harris
Last Light by Andy McNab
Changing My Mind by Zadie Smith
Money (The Keatyn Chronicles Book 10) by Jillian Dodd
Not Quite Dead (A NightHunter Novel) by Stephanie Rowe
Austensibly Ordinary by Alyssa Goodnight
Sisteria by Sue Margolis
Jurassic Park: A Novel by Michael Crichton
Our partner