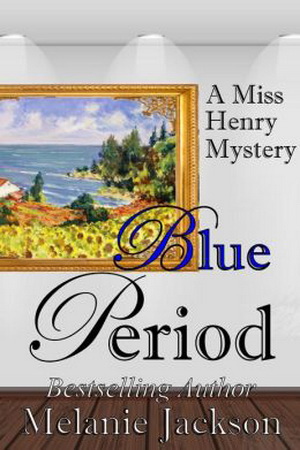 Published by Brian Jackson at KDP

Discover other titles by Melanie Jackson at
www.melaniejackson.com

This book is a work of fiction.  Names, characters, places and incidents either are products of the author’s imagination or are used fictitiously.  Any resemblance to actual events or locals or persons, living or dead, is entirely coincidental.

There was no heat like the heat of late
September, which was apparently why it was time to bring in the last of the grapes. Juliet should have been having fun standing among the bursting fruit with the crowd applauding around her, but she wasn’t.

Perhaps she would have been happier had she not been barefoot in grape slush
, baring legs that could have used a shave and more of a tan. She was an artist. She should be sitting in the shade and sketching cliché pictures of grapes while drinking the wine from the last harvest.

Or perhaps the trouble was the party itself.
The event hadn’t reached room temperature yet, and in spite of the brilliant sun, it probably never would feel any warmer or jollier. Good manners could only do so much when that year’s event coordinator’s favorite sport was intimidating his neighbors into doing what he wanted.

No matter. She had a job to do.
Her eyes narrowed behind her sunglasses, her muscles tensed. She addressed a prayer to Dionysus that he help her stomp the grapes that were destined to be vinified and then sold in supermarkets everywhere.

Normally Juliet did not enjoy team sports, but at some point in the afternoon, the couple in the other vat—the popular president of some wine growers federation and his hapless, slightly inebriated wife—had become smug adversaries, sneering at her chances because she was an artist who had never squished grapes before. The man beside her was no longer the annoying host of the art show she had reluctantly entered; he had become her comrade in arms. Together they would grind the lifeblood out of the hapless grapes under their feet and the juice would flow into the waiting buckets.

She saw Raphael once but looked away. His grin reminded her that she was
about to get splattered with pulp that would probably stain her clothes and face, making her look ridiculous. It was even possible that she would be photographed in this state and end up in the local newspaper. Then her old employers would see it and shake their heads sadly and wonder at how the mighty had fallen.

That couldn’t be allowed to matter. Juliet stomped, fast and hard, venting her anger at the
mostly wasted week she had spent in Napa, waiting for a twice-delayed Raphael to arrive from Boston. She smashed fruit in revenge for the snobbery of the art critics jurying the show and the worse arrogance of those who made wine and thought it gave them the right to critique paintings. When her angry energy at the locals wore out she moved on to dislike of her old coworkers and the job she had done for twenty-five years. At last, in a final bid to keep from collapsing in exhaustion, she thought of her stepmother and all her childhood insults and injustices that had come after her father died. That fed her just enough anger to keep her feet moving until the voice shouted: “Time!”

Exhausted, she gripped the side of the vat
and drew in heaving breaths of what felt like superheated air. Three minutes, only three minutes. But she was exhausted and feeling just a little sick as she fought the blackness at the edge of her vision.

Juliet did not watch as they measured
the results of the grape massacre. She did not stir until a hand touched her clenched fingers.

“Miss Henry,” Carl Owens said.
He was shockingly clean and Juliet suspected that he hadn’t been pulling his weight. “We’ve won. Damned if we haven’t beaten every other team. That means we are in the finals tomorrow.”

“We go up against the winners from Sonoma tomorrow afternoon.”

We
? He had the nerve to say
we
? Juliet reminded herself that this man could still be important to her career and that it would be the height of bad form to throw up with so many people watching, so she forced herself straight and jerked her lips into a smile as he pulled her arm into the air and then took a triumphant bow. Self-pity is never flattering so she didn’t indulge it. Especially not in public.

“Well, that’s great,” she lied
, retrieving her arm. Juliet waved at the audience as they applauded, noticing that they were being polite but not enthusiastic, and then forced herself to climb over the side of the vat. It was not gracefully done, but she was pleased that she didn’t fall down. She was stained purple from the waist down.

She staggered over to the shade of an oak where Raphael was waiting with a towel
, nodding at the words of congratulations from other couples whose matching shirts sported the hieroglyphics of various wine-related organizations.

“Well done, Juliet. Unless you have given yourself a coronary
. You look a bit red in the face,” he said softly, handing her the white towel folded in his lap and then opening a bottle of water.

Grape goop plopped onto the ground.
She could use a bath with one of the hoses they sluiced the tanks with over at the distillery. As it was, she planned on taking a long shower back at the cottage. As soon as she was strong enough to walk there.

“It was not well done.
We’ve won and the crowd doesn’t like it. They will boycott my paintings. And now, because I was efficient, I have to do it again tomorrow.” The intoxication of spending a week expense-free in the fabled California wine country had worn off, sweated away by frustration and heat.

“Yes,” he agreed
, sounding suspiciously amused. “But on the bright side, Carl will probably feel compelled to buy one of your paintings and display it at the winery.”

Juliet grunted and glared at her best friend
even as she accepted the water.

“And you shall have them. There is just enough time before the reception.”

“It better be an expensive painting. Nothing else will make this worthwhile.”

“Like it?” Raphael asked.
The lines around his mouth had eased into a genuine smile and Juliet tried to be happy too.

“Mostly,” Juliet answered
, meaning the town and not the people around them.

The winery was beautiful in an overproduced way. The
new castle with its crenellations was operatic in style, the lighting carefully theatrical and designed to enhance the fantasy mood with its shades of blue. Juliet admired it technically, but couldn’t warm to the architecture and its anachronistic encrustations of mixed cherubs and gargoyles that clashed with the older hacienda buildings.

She hadn’t warmed to
the owner of the encrustations either.

The town was another matter.
Napa seemed to ignore the seasonal whims of urban haute couture and kept its own fashion in food, architecture, and clothing. And wine. The style was a lot closer to Chanel or Ralph Lauren than say Vivienne Westwood. More Julia Child than Iron Chef. It was a village that was fully aware of its worth and dignity. Juliet could appreciate that. She also felt the need to defend herself from the barbarians at the gate.

Though mostly the liberal kind of place that Juliet Henry had come to expect from
upscale California, there were a few of the Second Amendment types around who spoke in slogans that came off NRA t-shirts. Some of them, like Carl Owens, owned vineyards and put on art shows which were good for her career. She didn’t like chronically angry men, but was willing to admit that sometimes rage could make people efficient. It had made Carl Owens rich, much to the dismay of the other growers who were more from the traditional molds of mid-twentieth-century ladies and gentlemen. They did not always see eye to eye with agrarian entrepreneurs who were out to increase market share. Some felt, and probably rightly, that cupidity and not quality was the guiding force behind some of the newer wineries. Like Blue Period, now that it was under Owens’ management.

The woman with Carl
that evening was a bit of surprise. She looked as expensive and well glossed as anyone there, but couldn’t be local. The hair was a highly improbable shade of red. And one put on an outfit like that only by avoiding mirrors while dressing. As an accent color, the choice was unwise. But in an entire pantsuit made up of zippers and well-placed rips, it was an eye-abrader. It resembled nothing so much as the mold that grows on cheddar cheese left under aging bologna at the back of the fridge. She was betting that this was L.A. streetwear by some
avant-garde
designer who was having a secret laugh at her clients.

Juliet could only shake her head.
She wasn’t even trying to look fashionably wealthy. That wasn’t a look that was available to her. She could do professional suits or Bohemian skirts. The latter seemed a better choice given the lingering heat and fifty-year-old hips. Unfortunately, though Rose’s creation was nice and cool it had also managed to collect a fine collection of twigs and leaves in the garden, and the fringe of her belt was hopelessly tangled among the skirt’s lumpy glass beads which sounded like an enraged rattlesnake whenever she moved.

“Yes, she is a bit over the top,” Raphael agreed. He had the habit, usually comforting but sometimes not, of reading her mind. “The mouth twists into a smile, but the eyes above it are blank.
Do you suppose it could be Botox?”

“It could equally be boredom.”

Their lips barely moved as they spoke. Their voices were politely hushed so no one would overhear them.

The evening smelled glorious. A nearby winery was harvesting its lavender crop and the sharp bite of shorn stems was being carried in with the fog which also rode the evening breeze
, rolling over the thimbleberry trees and into the newer gardens. Juliet hoped to visit them the following day. It was an old vineyard, one of the few that retained the nineteenth-century grapevines. They made only one wine and it was supposed to taste wild, even a bit feral. Since her host was pressuring the family to sell out, and he usually got what he wanted, it was possible that the Trefoil might not see another harvest of lavender or old grapes.

“The
new wine isn’t that bad, is it?” Raphael asked as she grimaced. He rarely drank in public and being acquainted with the vintner had opted not to refresh himself with any of the offered vintages.

Juliet tried not to grimace
again. All the white cab was made in stainless steel tanks which made it sterile tasting, and the red cabernet had so much oak in it that it was a chewy monster which left her wishing for some dental floss. It was a fine grocery store wine that would be great with barbecued pork rinds. The other vintners sneered at it. But quietly. Owens was known for taking offense at such comments and retaliating.

Full Court Devotion by Cami Checketts
The Crown of the Conqueror by Gav Thorpe
Show Off by Emma Jay
Scapegoat: The Death of Prince of Wales and Repulse by Dr Martin Stephen
Claudia Must Die by Markinson, T. B.
The Girl with the Mermaid Hair by Delia Ephron
The Lady Chosen by Stephanie Laurens
Midnight in Berlin by JL Merrow
Sunset Park by Paul Auster
Knee Deep in the Game by Boston George
Our partner