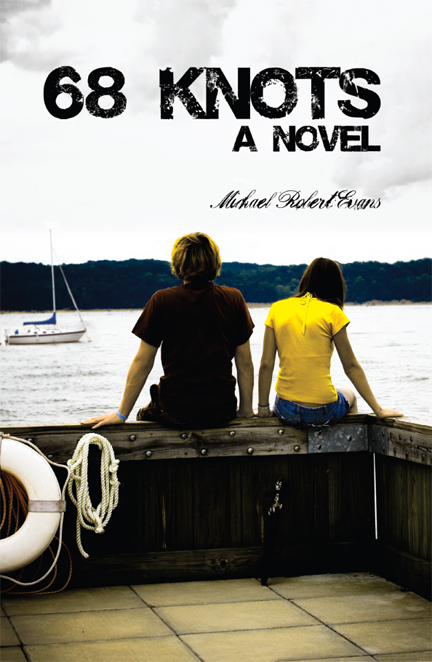 Text Â© Michael Robert Evans, 2007.
All rights reserved. Neither this book nor any part may be reproduced or transmitted in any form or by any means, electronic or mechanical, including photocopying, microfilming, and recording, or by any information storage and retrieval system, without permission in writing from the publisher.

The Publisher would like to thank Laura Maschler for her assistance with this title.

The Publisher would like to thank Gabriel Tierney and Angela Mascari for their help with the cover.

Summary: When a group of teenagers arrives for a summer leadership program on board a sailing ship, the teens do not expect the counselors to bail out and the leader of the program to commit suicide, leaving them in command without money or supplies, needing to figure out how to survive on their own.

To my mother,
Carolyn Ruth Robinson Evans,
and to Joanna, Dylan, and Miles,
my wonderful family.
-MRE

Arthur stared in disbelief at the dead body sprawled across the bed. The lanky seventeen-year-old sank down into a wooden desk chair and ran his hands through his hair.

Oh shit, he thought. This could be real trouble.

He shook his head. This summer was supposed to be exciting and fun, an adventure. But it started badly and got steadily worse. And now this, he thought. Now what are we going to do?

He took in a deep breath and let it out slowly, trying to calm his nerves and clear his thoughts. I guess I'll tell the others, he said to himself. They'll freak out, but I'll try to keep them focused. Someone has to step up and lead this crew, and it might as well be me.

The summer was full of promise, back when the plan involved idyllic days sailing along the coast of Maine. Arthur's father dropped him off at the docks and sped away in his black Lexus SUV. Arthur waved, but he could see that his father was already talking on his cell phone. The car cut its way into traffic and disappeared into a knot of angry drivers.

Arthur was tall for 17, with hazel eyes, straight brown hair, and an unusually deep voice. With an eager smile, he turned away from the traffic and toward the sea. He could feel the elation swell up inside him. A whole summer lay ahead of himâa summer spent on a tall ship, learning leadership and discipline and the right way to give commands so other people would follow them. He had worked for each of the last three summers in his father's law office, organizing papers and trying to absorb the intricacies of power. Now he would get a chance to sharpen his skills and show off a little on a ship off the coast of Maine.

Arthur's future seemed clear to him. Graduate from high school next year. Earn a government degree from Dartmouth. Get into law school at Harvard or Yale. Get hired by a prestigious law firm. Become a full partner by age thirty-eight. After that, who knew? With my determination and clear thinking, he said to himself, I might become a senator.

Arthur grinned. First things first, he thought. He picked up his duffel bag and looked down the dock. Rising from the bevy of white sailboats was a large, wooden, two-masted ship, with ropes in the rigging and flags flying from the top.

That must be it, he said to himself. The
Dreadnought
. My home for the summer. It looks like a pirate ship, he thought. He smiled as he shook his head. There aren't any pirates anymore. Are there? Nah, I don't think so. Besides, any adventure will be great. He started down the dock and toward the waiting ship.

But then he stopped. A coupleâa young man with short dark hair and a young woman with long blonde hairâstood off to one side of the dock, wrapped in a close embrace. They stared deeply into each other's eyes. They didn't move.

Arthur was transfixed; he let his duffel fall to the dock. The couple seemed unaware of the dock, the boats, and
Arthur's stare. They didn't kiss. They just absorbed each other into a profoundly intimate gaze.

Arthur felt a pang ofâof jealousy? These were strangers to him, but still he felt a wave of envy at their closeness. Arthur had never had that feeling with someone, and for an instant, he wanted it more than anything else.

Then he shook his head. “My father says emotional attachments make you vulnerable, and vulnerability is dangerous,” he muttered to himself. “It's lonely at the top for a reasonâand I'm going to get to the top.”

He picked up his duffel and continued down the dock toward the tall ship, looking over his shoulder one last time. The couple was still there, lost to the world in each other's eyes.

At the end of the dock, Arthur was greeted by three counselors in green T-shirts; they looked at bit frazzled despite their welcoming smiles. “I'm Hoon Yin,” said a thin young man with straight black hair. “That's Greg Anderson, and this is Robin Merriman. On board the ship, though, we all go by nicknames. I'm called âJet,' Greg is called âFred'âyou remember Fred, the strong cool kid from the Scooby-Doo cartoons?âand Robin is called âGrille' because she still wears braces at age twenty-two.” Hoon shrugged. “It's supposed to build character. You'll get your nickname soon.”

Hoon told Arthur to put his duffel on the deck near the bow and get ready to shove off. The counselors dragged the gangplank onto the ship, separating the tiny camp from the rest of the world, and a moment later the
Dreadnought
was sailing out to sea.

Arthur joined the seven other campers on a pile of vinyl mats in the middle of the boat. They introduced themselves to each other, but Arthur didn't catch many of the names. His
eyes were locked onto a young woman with an incredible body and expertly styled hair. He stuck out his hand.

“Arthur Robinson,” he said with a nod. The girl glanced at him and then looked away with an annoyed expression. “I'm Marietta,” she said. She didn't say anything more, and she didn't shake his hand.

The other campers chatted as the ship left the bay. Arthur began to sort out a few of the names. The big guy is Jesse, he noted to himself. And his little friend is Bill. That girl with the nice smile is Dawn. But he kept returning to Marietta, who gazed with a bored scowl at the sea.

Just a few hours later, on the bow of the
Dreadnought
, Joy Orejuela held onto a steel cable for dear life and prayed to God for salvation, reciting Psalms in Spanish: “
Jehova es mi pastor; nada me faltarÃ¡
,” she whispered. “The Lord is my shepherd; I shall not want.” The ship was leaning sharply to the right in heavy winds, ten-foot swells causing the bow to swing up and down with dizzying intensity. It was as if the bow were tied to a yo-yo string, and some unseen hand overhead was tossing it down and yanking it up for amusement. Every time the ship reached the bottom of a wave, Joy was certain that unless she prayed hard she would be splattered against the glowering wall of water ahead. Every time the ship arched over a crest, Joy was certain she would be flung toward space in a wild flailing swan dive that might never end. She kept one leg locked around the bowsprit rigging on one side, and her other leg pressed hard against the slippery wood of the bowsprit itself. She gripped the steel guy wire with both hands and squeezed
her eyes closed whenever possible. The counselors had sent her to the bow to watch for boats, lobster-pot floats, and other obstacles. She chose instead to concentrate on prayer.

The
Dreadnought
had been underway for most of the day before the captain of the ship came up from below. The counselors had been showing the campers how to work the ropes and winches that adjusted the sails, but once they steered the ship into a quiet bay, they heard Captain McKinley stomp up the narrow stairs. The counselors dropped anchor and formed a green-shirted wall behind McKinley at the helm.

McKinley stared at the campers, his belly straining against the buttons of his khaki shirt. He wore a black sailor's cap and silvered sunglasses, and a pipe jutted out from the corner of his mouth. He smiled.