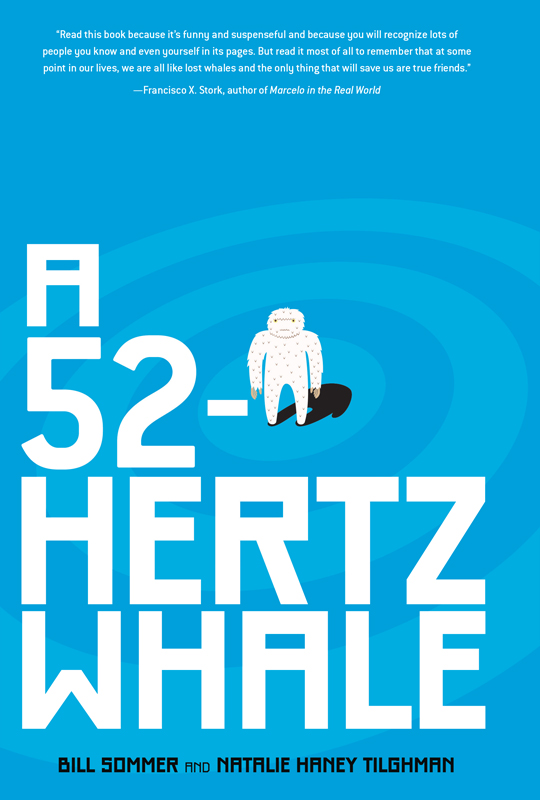 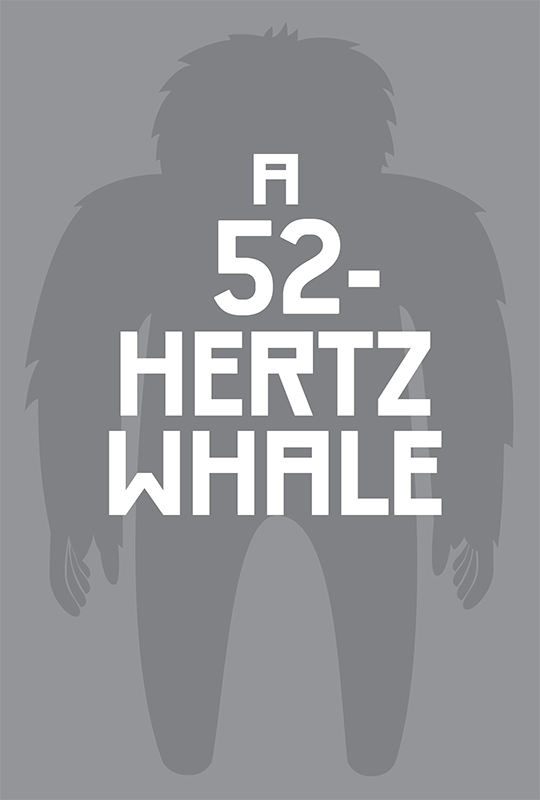 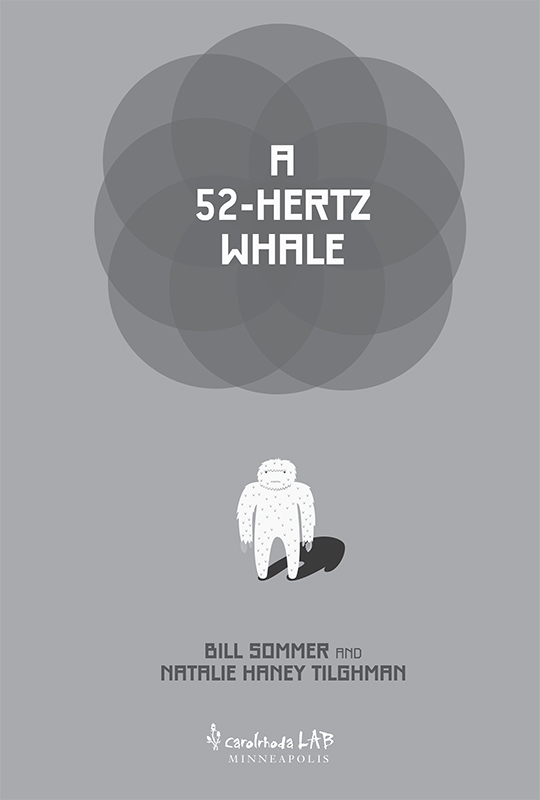 For reading levels and more information, look up this title
at
www.lernerbooks.com
.

The image in this book is used with the permission of: Â© iStockphoto.com/bldlss.

Summary: Reveals, through emails from various people, the growing connection between sixteen-year-old James, who is obsessed with the fate of a juvenile humpback whale he adopted, and Darren, a would-be filmmaker who once did community service in James's Special Education classroom.

For my boys, especially RHT IV,

You probably don't remember me.

We met like a year ago in the Resource Room at Glenside Middle School. You helped us film a completely ridiculous advertisement for a new soft drink. This was some sort of “exercise” to help our Social Skills group learn to work together, I guess. The result: Gabber Aid, “the beverage that speaks volumes.” I have to say that the only thing more embarrassing than being in the Social Skills group is to have it documented on film. Still, your camera work was impeccable.

By any chance, do you remember Sam Pick from the Resource Room? The kid who would wear a different shirt with a high-resolution picture of a spider on it each day of the week? Sam doesn't have to go to the Resource Room anymore now that we're at Carlsburg High. Last year, Sam and I would watch Jacques Cousteau DVDs after school. I taught him stuff like a humpback whale's heart can weigh three times as much as a human being's or that flukes are like fingerprintsâno two are the same. These days, though, Sam is busy playing backup goalie on the soccer team with people like Charlie Coxson. This Coxson character is a junior, the soccer captain, and his PSAT scores are so good that he's in Mensa. So it's easy to see why Sam thinks he's cool. That leaves me alone, listening to humpback songs on CD after school or tracking my adopted whale, Salt, on the Greater New England Whale Conservatory's website as he makes his annual migration to Argentina.

Which is why I'm emailing you. On your last day with our Social Skills group, you said if I ever needed help, I could contact you via this email. Well, I need help.

About a week ago, Salt's tracking dot was stalled in the Gulf of Maine. I was pretty certain that Salt was lost or separated from his pod. So I tried calling the scientists at the Greater New England Whale Conservatory (GNEWC) to alert them, but whoever answeredâmaybe it was the janitorâblamed the inactivity on a technical glitch. He also mentioned that juveniles don't migrate every year. (As if I didn't know that? I mean, really.)

Anyway, it was clear to me that this guy at the Greater New England Whale Conservatory didn't know a marine mammal emergency when he saw one. We're talking about a member of an endangered species hereâall alone and lost in 41,500,000 square miles of ocean. Anyway, when Salt's tracking dot started moving again a couple of days later, it was headed in the wrong directionâtoward New England's rocky coast instead of south toward the Carolinas. At this point, I think that Salt's echolocation is seriously impaired, which might cause him to beach.

What should I do?

P.S. How are you? What are you doing these days?

Good to hear from you, dog. Bummer about your giant mammalian buddy. Unfortunately, I'm no whale expert and don't know what to tell you about getting your boy turned in the right direction. Heck, I might be even more lost than him these days. Might have to go to the doc and get my echolocation checked out.

P.S. Thanks for noticing my camera work.

I have to apologize if you just gave me your email just to be polite. Kind of like when people ask, “How are you?” but don't want to know the answer. One time, when I was little, this grocery clerk asked me how I was doing, and I said that I peed my pants at school and the nurse had to give me a pair of jeans that were two sizes too big and I was thinking of running away, maybe jumping a plane from Philly to Patagonia to watch the annual whale migration. “But he's fine,” my mom said. The clerk smiled and I realized that Mom had given the right answer.

Anyway, I wrote you because I thought I remembered you mentioning something about an article that you read online featuring a historically significant blue whale poopâthe largest on recordâand how it was pretty cool that floating feces can end up fertilizing the entire ocean, keeping the ecosystem in good working order. You seemed to get the fact that humans need whales. And I figured you'd understand how Salt's untimely disappearance directly affects us all.

Check it, dog. Here's the email I was telling you about. It's from this kid at the school where I paid my debt to society last year. Poor li'l dude must be lonely as hell!

Just checking in to see how you're holding up. Talked to Mom the other day, and from what it sounded like, the worst of it's behind you. Just remember that time is your friend here.

Nothing much to report. John's company didn't give him any paternity leave, so once Mom left, I was on my own for a few weeks and I was starting to go slightly insane, I think, so he just took a week off and stayed around the house and helped out. It was SO nice to have an adult conversation before 6 p.m. every day. Bad news is, Good-bye vacation. Probably won't get to see you at Christmas unless you want to come out here. Winters in Milwaukee get a much worse rap than they deserve. (Ha! No they don't. They get exactly the rap they deserve. Can't lie to my li'l bro.)

Gracie's down for her nap and Robby's just lying here staring up at me as I type this. I've got some awfully cute photos of my two little munchkins that I'll send you for a little added cheering up. Mom told me you're off Facebook for the time beingâsmart move, I wouldn't be able to resist looking at her pictures eitherâso I'll put a bunch of pics of the twins in an email when I get a chance.

Lonelier than the dude who emailed the dude he sleeps down the hall from at one in the morning? Hey-o! What a burn. Take Darren to the Burn Unit!

Also, another reminder: doing your dishes is not a once-a-week chore. It's an every-time-you-use-dishes chore. ComprendÃ©?

I don't know if I was just being polite when I gave you my email address, as I have no recollection of doing so. Due to some recent revelations in self-knowledge, though, I'm guessing what really happened was that I felt some brief but powerful surge of emotion toward you and gave you my email address. In the intervening months, all of my emotional enthusiasm has gotten sucked into a black hole, to the point that I forgot the entire incident.

Anyway, as far as the giant whale poop, I think you've got me confused with someone else. I actually have to work hard to block out thoughts of marine feces every time I go in the ocean, otherwise I can't enjoy my swim. So I definitely wasn't doing a happy dance over a colossal whale turd.

But I do remember helping out in that Social Skills class and filming you in the Gabber Aid commercial. I remember you really nailing the part where you're standing there looking back and forth as two kids have a conversation and you're totally left out in the cold until you chug that Gabber Aid and make a brilliant conversational entrance like, “Hey guys, what's up?” Easier said than done, I know. Waitâactually, the saying is the doing in that case. Which is the hard part for folks in your situation, right? Anyway, not easily said. I have trouble empathizing on that particular difficulty, as I'm rarely at a loss for words. Honestly, my life would probably be a lot better off if I lost a few words every now and then.

And of course I remember Sam. I applaud him for broadening his horizons with soccer, though it's a bummer you guys aren't as close anymore. You know what they say (actually you probably don't, since you're fourteen, so I'm going to tell you): The only constant in life is change. He moved on. You might have to as well. Same thing happened to me a while back.

As for how I'm doing: When I met you, I was back in Philly on a little, um, hiatus from college, but after the year ended I headed back to Los Angeles and finally graduated with a Bachelor's in film and television production from USC. Unsure of what to do next, I threw together a ragtag crew of misfits and we said, “Screw the establishment, we're going to make a movie on our own terms.” So we did, the critics loved it, and now we've been asked to take over the entire Marvel comics film franchise. We're considering it.

The Serpent's Ring (Relics of Mysticus) by Bolton, H.B.
LADY UNDAUNTED: A Medieval Romance by Tamara Leigh
Somebody Else's Music by Jane Haddam
Those Jensen Boys! by William W. Johnstone
When Venus Fell by Deborah Smith
All I Want is that Hood Love 3 by Mercedes G
Kendra by Coe Booth
A Shade of Vampire 7: A Break of Day by Bella Forrest
Cord SEAL Team Seven (Book 5) by Jordan Silver
Nemesis: Innocence Sold by Ross, Stefanie
Our partner