A Brief History of Creation 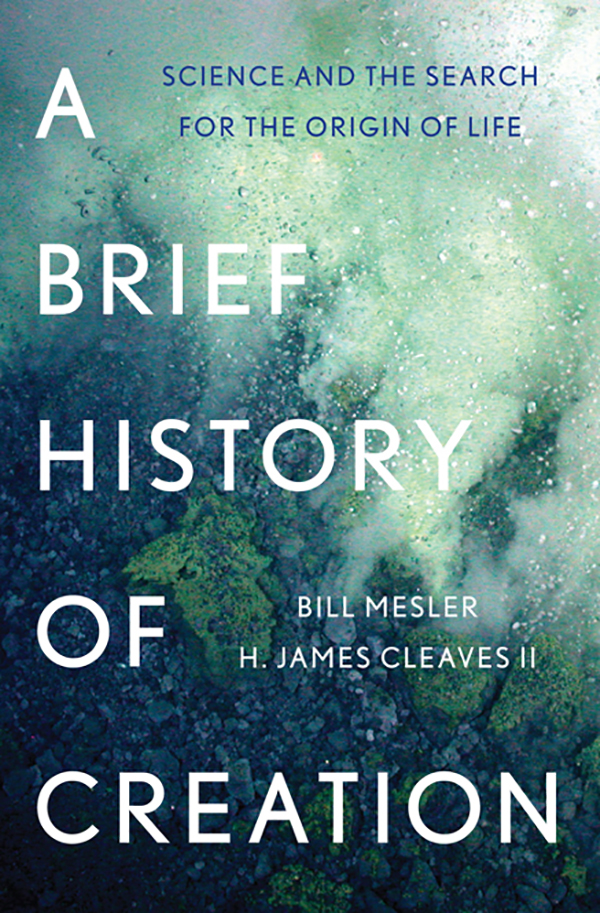 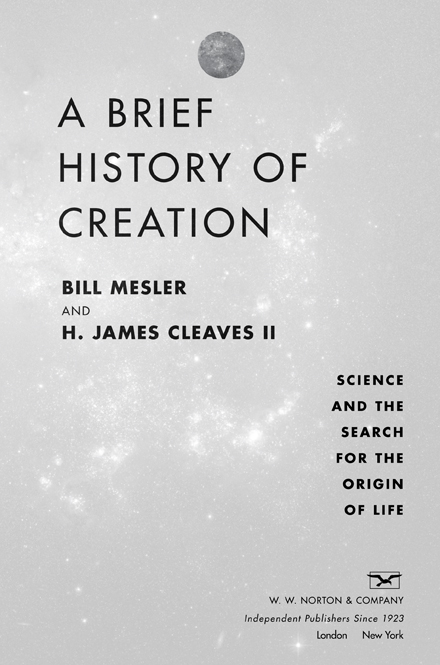 Not everything mentioned in the Torah concerning the Account of the Beginning is as the vulgar imagine, for if the matter were such . . . the sages would not have expatiated on its being kept secret. The correct thing to do is to refrain, if one lacks all knowledge of the sciences, from considering those texts merely with the imagination
.

1. BY THE ACTION OF YOUR SUN

4. THE LABORATORY OF THE ATHEISTS

6. BREATHED BY THE CREATOR INTO A FEW FORMS OR ONE

7. PLEASANT, THOUGH THEY BE DECEITFUL DREAMS

8. NO VESTIGE OF A BEGINNING

The birth of the RNA world * Genetic engineering opens doors * A new genesis?

It was the secrets of heaven and earth that I desired to learn; and whether it was the outward substance of things or the inner spirit of nature and the mysterious soul of man that occupied me, still my inquiries were directed to the metaphysical, or in its highest sense, the physical secrets of the world.

T
HE SEAFLOOR WAS DARK GREEN
, sloped like the outer edges of a huge jade dome, and cut by deep chasms and steep ravines. There were few signs of life. Hardly anything could be seen living that deep in the ocean, only a few slumbering giant clams and the occasional tube worm, some as large as 8 feet long. Every so often, one of the enormous worms would puff out a blood-red plume that would linger in the water like octopus ink, drifting past enormous white pinnacles that dotted the landscape. The largest towered sixteen stories above the ocean floor. Their surfaces were rough like bark, giving them the organic appearance of trees in some alien forest, spreading their branches toward the sun.

But no sunlight could penetrate that deep. A full half mile below the surface of the ocean, the ghostly pinnacles had never seen any kind of light at all until they were illuminated by the first dim flickers of a strobe light fastened to a lumbering metal craft that crept slowly above the ocean floor.

The
Argo
was about the size of a long canoe, enclosed by a large metal cage resting on sled-like rails. It didn't look like much, but the little unmanned craft already had a long and storied history. The
Argo
had taken
part in some of the most important deep-sea explorations ever conducted and had found the wrecks of both the
Titanic
and the
Bismarck
. It carried some of the most sophisticated oceanographic sensors and cameras in the world, which transmitted their signals via 6 miles of cables connecting it to the surface and the research ship
Atlantis
, where geologists Barbara John and Gretchen FrÃ¼h-Green steered it by means of a tiny joystick.

The scientists knew the
Atlantis
would soon have to return to port. It was early in December of 2000, and the ship had already been at sea for more than a month. The weather was turning roughâthe first signs of a big squall coming in from the northeast. The
Atlantis
was a large shipâ274 feet long with a crew of twenty-three and space for several times that number. It could handle a storm, but the delicate work of exploring the ocean floor required gentle seas.

The choppy water was already making it difficult to operate the
Argo
. Every swell of the ocean and sway of the ship tugged at the little craft down below. The
Argo
was tricky enough to maneuver under normal conditions, but even trickier as the scientists tried to navigate it through an undersea equivalent of the Alps, filled with unusually steep pinnacles and sharp cliff faces.

The
Argo
was exploring a deep-sea mountain called the Atlantis Massif, about halfway between Europe and North America, near the largest underwater range in the world, the Mid-Atlantic Ridge. The scientists steering from above had reason to suspect there was something special about the Atlantis Massif. The first clue was its size. It was enormous: 10 miles wide and 14,000 feet tall, about as big as Mount Rainier. The second was its composition. While much of the bottom of the ocean is covered by a mixture of minerals, the Atlantis Massif is made up almost entirely of a dense, green rock called peridotite, usually only found at least 20 miles beneath the Earth's crust. Still, John and FrÃ¼h-Green didn't expect to find what no human being had ever seen, something that would become, for some, a crucial clue in the quest to answer one of the greatest enigmas in science.

As they cautiously steered the
Argo
along the rim of the mountain,
the two scientists saw the first of the treelike pinnacles. More and more became visible as the craft drew closer. The first thing that struck John and FrÃ¼h-Green was their height. One that would later be named Poseidon was 180 feet tall. As they steered the
Argo
toward the giant pinnacles, they noticed something else. The water was getting warmer. It dawned on them that the treelike rocks were actually what are known as submarine hydrothermal vents, a network of underwater chimneys caused by volcanic activity below the ocean floor. But these were far larger than any a human being had ever laid eyes on. When they finally spotted the first milky-white plumes of warm water coming from the tops, they realized they were looking at a new kind of chimney altogether, something few had ever guessed existed. They named the field the Lost City.

I
T DIDN'T TAKE LONG
for news of the discovery to reach the desk of British geologist Mike Russell. Russell wasn't the only scientist in the world to suspect the existence of chimneys like those found at the Lost City. He was, however, one of the only scientists to have said with great conviction that they did exist, or at least that they had existed sometime around four billion years ago. The way Russell saw it, if those chimneys didn't exist, then we wouldn't exist, nor would any other living thing on Earth.

As a young geologist, Russell had spent several years doing fieldwork at the Silvermine Mountains in central Ireland. There he came across unique, tubelike formations of minerals that, for him, had only one possible explanation: long ago, when the whole of Ireland lay under the Atlantic Ocean, hydrothermal chimneys had percolated up through the seafloor that once existed on the dig site. What made Russell's claim so contentious was that he was talking about a kind of chimney that was different from the only ones then known to exist: the viciously hot “black smokers” that get their name from the toxic discharge of metals and sulfur that lends them the appearance of nineteenth-century industrial smokestacks. The vent that Russell imagined was merely warm, and it was rich in minerals. It was not all that hostile to living things.

Subsequent trips to the Dalmatian Alps and various mineral fields in Canada further convinced Russell that such chimneys had to exist. More important, he believed that they represented a significant clue to answering a question that had become one of the greatest challenges science had ever faced: the enigma of how life itself came to exist. Such chimneys, thought Russell, would be the perfect birthplace for life. If scientists could say conclusively where life arose, determining how it arose would be that much easier.

A century and a half before, another scientist had tried to conceive of the environment where life might have first emerged. Charles Darwin had suggested a “warm little pond.” Ever since, most scientists had taken it for granted that the presence of water was necessary. They also supposed that the ancient oceans were not good candidates for the birthplace of life.

According to Russell, when the first living things appeared some four billion years ago, the oceans were about as inhospitable an environment as one could imagine. They were filled with carbon dioxide leached from the Earth's early atmosphere, leaving them too acidic to give birth to even the most primitive forms of life we know of today. They contained few of the organic chemicals that most scientists assumed were necessary for life to arise. And those chemicals would have been too dilute to easily come together to form living things.

Not so the water in Russell's chimney. The water in his “hydrothermal garden” would never get too hot or too cold. It would have been rich in a diverse variety of minerals. Also it would have been shielded from constant bombardment by meteorites and solar ultraviolet radiation on the surface world above. Despite serious opposition from veteran scientists in the field, Russell started promoting his theory with a kind of evangelical fervor. How life began was a question that had become the holy grail of the life scientists, and Russell believed he had found the key to answering it. His conviction rubbed more than a few of his peers the wrong way. To them, Russell's theory was, for the most part, mere conjecture, an interesting idea and nothing more. Supporters of hydrothermal-vent models were sometimes mockingly derided as “ventists.” 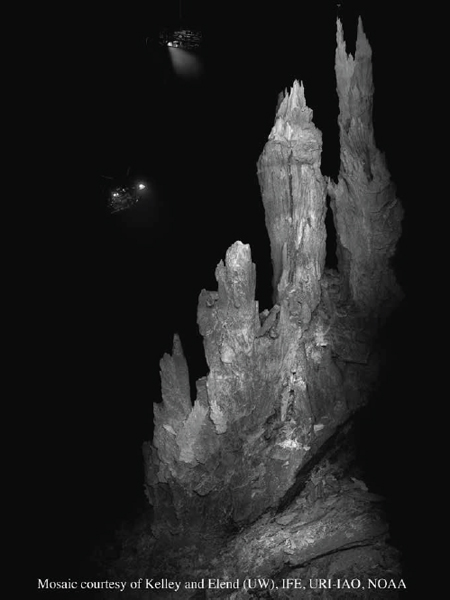 Candy's Man by Jeanette Hornby
What Doesn't Kill You (A Suspense Collection) by Tim Kizer
Operation Willow Quest by Blakemore-Mowle, Karlene
Vengeful Love: A Summer Love Story (contemporary romance) (Sizzling Summer Romance) by Leeson, Jillian
Rise of Souls: A Prophecy of the Sisters Novella by Zink, Michelle
Werecat Avenue by Anjela Renee
Teetoncey and Ben O'Neal by Theodore Taylor
The Fox Steals Home by Matt Christopher
Murder on the Half Shell (A Red Carpet Catering Mystery Book 2) by Shawn Reilly Simmons
Daughters of the Silk Road: A beautiful and epic novel of family, love and the secrets of a Ming Vase by Debbie Rix
Our partner