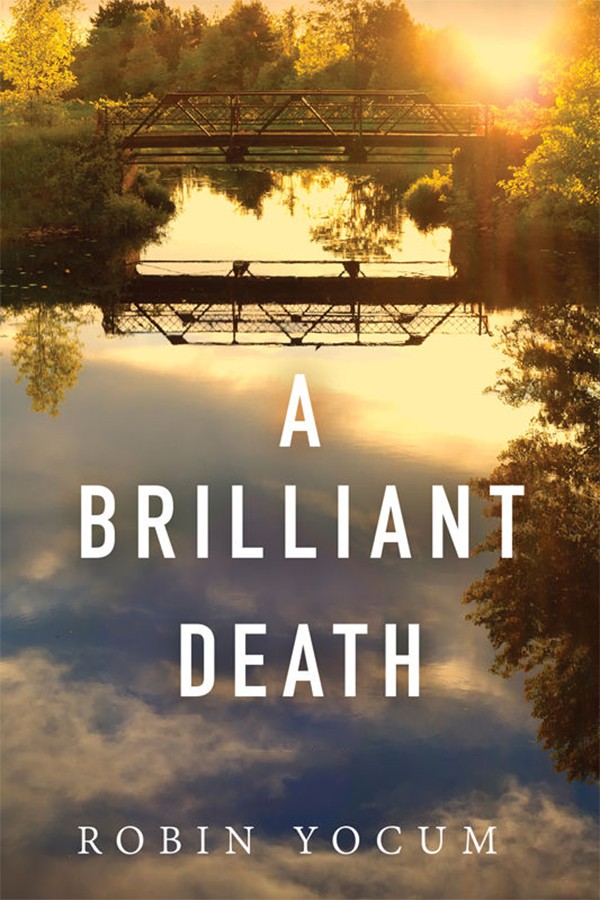 Published 2016 by Seventh Street Books®, an imprint of Prometheus Books

A Brilliant Death
. Copyright © 2016 by Robin Yocum. All rights reserved. No part of this publication may be reproduced, stored in a retrieval system, or transmitted in any form or by any means, digital, electronic, mechanical, photocopying, recording, or otherwise, or conveyed via the Internet or a website without prior written permission of the publisher, except in the case of brief quotations embodied in critical articles and reviews.

This is a work of fiction. Characters, organizations, products, locales, and events portrayed in this novel either are products of the author’s imagination or are used fictitiously.

I never met my Grandfather Kaminski. He was only forty-two when he dropped dead of a heart attack at the Nickel Plate Railroad yard in Dillonvale. He had just finished his coffee break and was putting together a train of empty coal cars to be filled at the Youghiogheny and Ohio Coal Company mine in Barton when he turned to Nippy Borkowski and said, “Dammit, Nippy, I think I’m dead.” Before Nippy could take the cigarette out of his mouth, my grandfather dropped like a felled pine between two coal cars. They called Doc Barnes, who ran down from his office over the Miner’s Bank & Trust Company, but my grandfather was likely dead before he hit the gravel ballast.

Doc Barnes said it was a massive heart attack, but my father said that anyone who knew my grandfather realized he died of acute estrogen exposure.

Walter Kaminski was five when his family immigrated to Ohio from the Oder River basin town of Bukow in western Poland. They settled in the coal mining community of Piney Fork, about ten miles west of the Ohio River Valley. He was fourteen when he began working on the railroad and twenty-six when he saved my grandmother from becoming an old maid, marrying her when she was nineteen. Over the next eight years, she gave birth to six children—all girls. She was ready to stop at four, but agreed to keep trying in order to give Grandpa Kaminski a son to carry on the family name. Alas, another girl—my Aunt Bess. When she became pregnant with baby number six, she announced that upon delivery of the child, son or no, it would be the last. Before she left the hospital with Aunt Victoria, she had her tubes tied and the baby factory closed.

Or so she thought.

Apparently, tubal ligation in its infancy wasn’t that effective, and six months later she was pregnant again. She was furious; he was delighted, as it gave him one last chance for a son. The fates were against him, however, and she delivered not one daughter, but
three.
Triplets! This was extremely rare in the 1930s, long before the advent of fertility drugs. There were big stories in the papers, and the girls became local celebrities, known as “the abelles”—Annabelle, Marabelle, and Rosabelle.

He had a wife and nine daughters born within ten years of each other. My father said Grandpa Kaminski took the coward’s way out, choosing to drop dead and cede all responsibility to my grandmother.

We three cousins grew up in the same Upper Ohio River Valley region, dreaming of fame on the athletic field and hoping to escape the steel mills and coal mines. I was not the equal of my cousins in athletic ability or good looks, but I’d like to think God evened the score by granting me a modicum of common sense, which sometimes seems to be sadly missing in most descendants of Walter Kaminski, who have shown a tendency to live for the moment and think with their peckers.

My name is Mitchell Malone, and I grew up in the river town of Brilliant. Nicholas, who was known as Duke, grew up in Mingo Junction. Johnny, who in junior high insisted that he be called Giovanni, even though he was more Polish than Italian, grew up in Steubenville. We were bonded by family blood and the gritty air and muddy waters of the Ohio River Valley. Never in my vivid imagination did I dream we would ultimately have another common bond—murder. Duke and Johnny would see their adult lives knotted like spinning rope, and they have their own tales of intrigue, but not just yet. First, there’s my story. It begins in the summer of 1953, when a river barge crushed a pleasure boat—
Lady Luck
—on the Ohio River. The disappearance of the boat’s passengers would launch a mystery that would fuel the gossip mill and perplex authorities for decades.

And I am the only one who can tell the entire story.

Missing After Car Plunges into River

BRILLIANT
—Rescue workers from five local fire departments searched the Ohio River today for the body of the Brilliant High School senior class salutatorian believed to have died shortly after midnight Sunday when the car he was driving plunged 110 feet over a cliff and into the murky waters beneath Hunter’s Ridge just north of town.

Baron, who only hours earlier had addressed his fellow seniors at his commencement, was fleeing police when he crashed through a barrier and went over the cliff. A police spokesman said Baron was last seen driving at a high rate of speed on Jefferson County Road 19 near the entrance to Hunter’s Ridge Park.

By the time pursuing police arrived at Hunter’s Ridge, the car was sinking into the Ohio River. There were no witnesses to the accident.

Sources said Baron had reportedly been drinking at several graduation parties before the chase began shortly before midnight.

“Obviously, we don’t hold much hope of finding him alive,” said Brilliant Volunteer Fire Chief Delmar Bernoski, whose son James also participated in the graduation ceremonies. “With all the rain, and the river flowing so swiftly, his body could be 20 miles downstream by now.”

Ironically, Baron’s mother drowned in the river 18 years ago this fall, not far from last night’s mishap. Amanda Baron was on the family’s cabin cruiser the night of Oct. 17, 1953, when it was rammed by a coal barge.

Her body and the body of a male companion were never found.

Shortly after noon today, divers located the car, a black, 1957 Chevrolet show car owned by Travis Baron’s father, Francis M. Baron. However, the body had been washed free of the vehicle.

The senior Baron, a truck driver, was out of town at the time of the accident.

Baron was at a graduation party on Grant Avenue when he became belligerent and got into a fight with a friend, whom Maurer refused to identify. The chief said the host of the party asked Baron to leave at about 11:30 p.m.

Baron apparently left the party on foot but returned a short time later driving his father’s car, which, according to Maurer, he did not have permission to drive. Brilliant Patrolman Cloyd Owens attempted to stop Baron after it was apparent he was intoxicated. However, Baron fled from the officer.

Owens chased Baron south through Brilliant to Riddle’s Run Road. Baron then led the officer four miles northwest to the intersection of Riddle’s Run and State Route 151, where he turned back east toward Brilliant. As they neared Brilliant, Owens said Baron had stretched a substantial lead on the police cruiser. Owens said he was at least a half-mile away when he saw the taillights of the Chevrolet leave the road. By the time Owens reached the spot where Baron went through the barrier to the park, the vehicle had disappeared over the embankment. Owens said he ran to the edge of the cliff in time to see the vehicle’s taillights sink beneath the water.

Chief Maurer speculated that a combination of speed, alcohol, and unfamiliarity with the powerful car led to the tragic conclusion of a promising life.

“You’ve got to wonder what he was thinking,” Maurer said as he watched rescue workers drag the river bottom for the body. “Here’s a kid, the class salutatorian, with his entire life ahead of him, and he pulls a stunt like this. Now, everyone’s memory of graduation isn’t going to be of the good times, but this.”

Baron also was a member of Brilliant’s cross country and track teams and was a district wrestling champion in the 118-pound weight class. He was the only child of Francis and the late Amanda Baron.

The time frame established for telling this story was simple: I would begin the minute I was sure that Francis “Big Frank” Baron was dead. This plan was potentially flawed by the chance, albeit slight, that Big Frank would outlive me, but I liked my odds. Big Frank was twenty-five years my senior and a health insurer’s nightmare. He was a hundred pounds overweight, chain-smoked non-filtered Lucky Strike cigarettes, and could take a twelve-pack out of the fridge and polish it off before the last beer got warm. The possibility that he would outlive me was not a concern. My concern was for my own skin. If I wrote the book while he was still breathing, Big Frank Baron would hunt me down and kill me. Simple as that. Given Big Frank’s history, this fear was not unfounded. He was a violent man, and I have retained in my memory the vivid image of the day he backhanded his son for the heinous act of asking for three dollars to go to the movies. After Travis had cleaned the blood from his face and the splatter marks from the refrigerator, we sat on the steps of the back porch as he pressed an ice cube wrapped in a bloody dish towel against a split and swollen upper lip. There were still tears in his reddened eyes when he said, “I wish the bastard would die, but he’s so mean he’ll probably live forever.”

Perdita by Joan Smith
Ninth City Burning by J. Patrick Black
Progeny (The Children of the White Lions) by Kaelin, R.T.
Darkest England by Christopher Hope
Dragonclaw by Kate Forsyth
Antiques Maul by Allan, Barbara
Blackouts and Breakdowns by Rosenberg, Mark Brennan
(For His Pleasure 14) With His Belief by Kelly Favor
Blue by Danielle Steel
With My Dog Eyes: A Novel by Hilda Hilst
Our partner