Read A Carol for a Corpse Online

A Carol for a Corpse 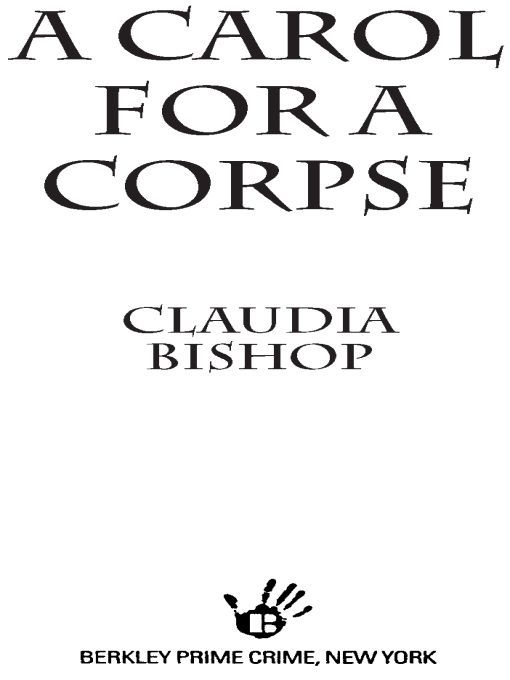 Table of Contents
Title Page
Copyright Page
Dedication
CHAPTER 1
CHAPTER 2
CHAPTER 3
CHAPTER 4
CHAPTER 5
CHAPTER 6
CHAPTER 7
CHAPTER 8
CHAPTER 9
CHAPTER 10
CHAPTER 11
CHAPTER 12
QUILL’S CHRISTMAS PROJECT
MEG’S CHRISTMAS DELIGHTS
MEG’S MINT CHUTNEY
About the Author
THE HEMLOCK FALLS MYSTERIES
1 pretty little town in upstate New York
1 picturesque inn overlooking Hemlock Gorge
2 talented sisters better at solving crimes
than they are at their day jobs
1 (or more) murders
A WINNING RECIPE FOR MYSTERY LOVERS
Don’t miss these Hemlock Falls Mysteries . . .
GROUND TO A HALT . . .
Murder doesn’t stop the Inn’s pet food conventioneers from fighting like cats and dogs—but it does bring business to a grinding halt.
A DINNER TO DIE FOR . . .
Less-than-friendly professional competition. A serious case of cold feet. And, oh yes, a local murder. Could things go worse on Meg’s wedding day?
BURIED BY BREAKFAST . . .
The leader of a raucous group of protestors turns up dead— and the Quilliams must quell fears and catch a killer before another local V.I.P. is greeted with an untimely R.I.P.
A PUREE OF POISON . . .
While residents celebrate the 133rd anniversary of the Battle of Hemlock Falls, the Quilliam sisters investigate the deaths of three people who dined at the Inn before checking out.
FRIED BY JURY . . .
Two rival fried chicken restaurants are about to set up shop in Hemlock Falls—and the Quilliams have to turn up the heat when the competition turns deadly.
JUST DESSERTS . . .
There’s a meteorologist convention coming to the Inn, and it’s up to Quill and Meg to make sure an elusive killer doesn’t make murder part of the forecast.
MARINADE FOR MURDER . . .
The Quilliams’ plans for the future of the Inn may end up on the cutting-room floor when a group of TV cartoon writers checks in—and the producer checks out.
A STEAK IN MURDER . . .
While trying to sell the locals on the idea of raising their own herds, a visiting Texas cattleman gets sent to that big trail drive in the sky. The Quilliams set out to catch the culprit and reclaim their precious Inn . . . without getting stampeded themselves!
A TOUCH OF THE GRAPE . . .
Five women jewelry makers are a welcome change from the tourist slump the Inn is having. All that changes when two of the ladies end up dead, and the Quilliams are on the hunt for a crafty killer.
DEATH DINES OUT . . .
While working for a charity in Palm Beach, the Quilliam sisters uncover a vengeful plot that has a wealthy socialite out to humiliate her husband. Now the sleuths must convince the couple to bury the hatchet—before they bury each other.
MURDER WELL-DONE . . .
When the Inn hosts the wedding rehearsal dinner for an ex-senator, someone begins cutting down the guest list in a deadly way. And Quill and Meg have to catch a killer before the rehearsal dinner ends up being someone’s last meal.
A PINCH OF POISON . . .
Hendrick Conway is a nosy newsman who thinks something funny is going on at a local development project. But when two of his relatives are killed, the Quilliam sisters race against a deadline of their own.
A DASH OF DEATH . . .
Quill and Meg are on the trail of the murderer of two local women who won a design contest. Helena Houndswood, a noted expert on stylish living, was furious when she lost. But mad enough to kill?
A TASTE FOR MURDER . . .
The annual History Days festival takes a deadly turn when a reenactment of a seventeenth-century witch trial leads to twentieth-century murder. Since the victim is a paying guest, the least Quill and Meg could do is investigate.

Don’t miss Claudia Bishop’s
new veterinarian mystery series,
the Casebooks of Dr. McKenzie, including
The Case of the Roasted Onion
and
The Case of the Tough-Talking Turkey
!
Hemlock Falls Mysteries by Claudia Bishop
A TASTE FOR MURDER
A DASH OF DEATH
A PINCH OF POISON
MURDER WELL-DONE
DEATH DINES OUT
A TOUCH OF THE GRAPE
A STEAK IN MURDER
MARINADE FOR MURDER
JUST DESSERTS
FRIED BY JURY
A PUREE OF POISON
BURIED BY BREAKFAST
A DINNER TO DIE FOR
GROUND TO A HALT
A CAROL FOR A CORPSE 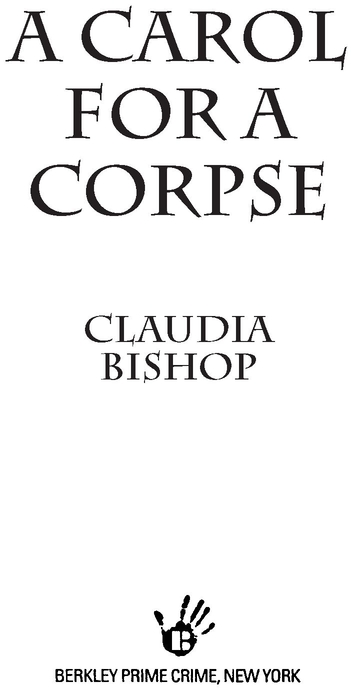 For Julie
CAST OF CHARACTERS
AT THE INN AT HEMLOCK FALLS

And other members of the Hemlock Falls Chamber of Commerce
PROLOGUE
There had to be some way to kill him.
And it had to be soon.
Everyone was gone. The meeting room still held a faintly congratulatory air, enhanced by the professionally decorated Christmas tree standing to the right of the wet bar. Two empty bottles of Moët et Chandon lay abandoned at the coffee station, jammed onto the plate of pâté, caviar, and the remains of soft French cheeses. The C-SPAN people had left an orange extension cord coiled under the windows overlooking Times Square.
He’ll be back in here in just a few minutes, full of himself. Crowing like a rooster. I could wind the cord around his neck from behind. Jerk it tight. Hold on for a sweet, sweet eternity until . . . no. That’s stupid. You can’t be anywhere near him when it happens.
A brightly colored array of advertising brochures sprawled across the conference table, all that was left after the contracts had been signed, sealed, and notarized, the copies initialed, the files tucked away into the lawyers’ briefcases.
The brochure read:
PARADISE FOUND! THE INN AT HEMLOCK FALLS