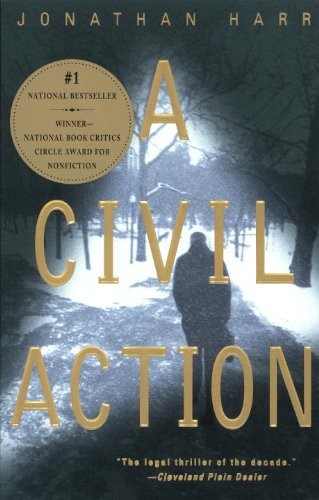 Copyright © 1995 by Jonathan Harr
Maps copyright © 1995 by Anita Karl and Jim Kemp
All rights reserved under International and Pan-American Copyright
Conventions. Published in the United States by Random
House, Inc., New York, and simultaneously in Canada by
Random House of Canada Limited, Toronto.

This is a work of nonfiction. All the characters and events depicted in this book are real. Much of the material comes from my own observations over a period of eight years, beginning in the winter of 1986, and from repeated interviews with those persons directly involved. The voluminous official record, particularly some fifty thousand pages of deposition and trial transcripts, provided another vital source. The reader can find further information in
A Note on Sources
and
Acknowledgments
at the end of the narrative.

Afterword to the Vintage Edition

The lawyer Jan Schlichtmann was awakened by the telephone at eight-thirty on a Saturday morning in mid-July. He had slept only a few hours, and fitfully at that. When the phone rang, he was dreaming about a young woman who worked in the accounting department of a Boston insurance firm. The woman had somber brown eyes, a clear complexion, and dark shoulder-length hair. Every working day for the past five months the woman had sat across from Schlichtmann in the courtroom, no more than ten feet away. In five months Schlichtmann had not uttered a single word directly to her, nor she to him. He had heard her voice once, the first time he’d seen her, but he could no longer remember what it sounded like. When their eyes had happened to meet, each had been careful to convey nothing of import, to make the gaze neutral, and to shift it away as quickly as possible without causing insult.

The woman was a juror. Schlichtmann hoped that she liked and trusted him. He wanted desperately to know what she was thinking. In his dream, he stood with her in a dense forest, overgrown with branches and roots and vines. Behind the woman were several people
whose faces Schlichtmann recognized, the other jurors. The woman was trying to decide which path in the forest to take and Schlichtmann was attempting to point the direction. He beseeched her. She remained undecided. A dream of obvious significance, and unresolved when the phone rang and Schlichtmann awoke, enveloped by a sense of dread.

The man on the phone identified himself as an officer at Baybank South Shore, where Schlichtmann had an automobile loan that was several months in arrears. Unless Schlichtmann was prepared to pay the amount due—it came to $9,203—the bank intended to repossess the car, a black Porsche 928.

Schlichtmann had no idea whether or not Baybank South Shore had been paid in the last several months, but on reflection he felt pretty certain it had not. He told the banker to speak with a man named James Gordon. “He handles my financial affairs,” said Schlichtmann, who gave the banker Gordon’s telephone number and then hung up the phone.

Schlichtmann was still in bed twenty minutes later when the phone rang again. This time the voice on the other end identified himself as a Suffolk County sheriff. The sheriff said he was at a pay phone on Charles Street, two blocks from Schlichtmann’s building. He had come to repossess the Porsche. “I want you to show me where the car is,” said the sheriff.

Schlichtmann asked the sheriff to wait for ten minutes. Then he tried to call Gordon. There was no answer. He lay in bed and stared at the ceiling. Again the phone rang. “Are you going to show me where the car is?” asked the sheriff.

“I think I will,” said Schlichtmann.

The sheriff, a large, heavyset man in a blue blazer, was waiting for Schlichtmann at the front door. It was a clear and brilliantly sunny morning in the summer of 1986. From the doorstep, Schlichtmann could see the sun glinting off the Charles River, where the white sails of small boats caught a brisk morning breeze. The sheriff handed him some documents dealing with the repossession. Schlichtmann glanced at the papers and told the sheriff he would get the car, which was parked in a garage three blocks away. Leaving the sheriff at his doorstep, he walked up Pinckney Street and then along the brick sidewalks of Charles Street, the main thoroughfare of Beacon Hill. He walked past several cafés, the aroma of coffee and freshly baked pastries
coming from their doorways, past young mothers wheeling their children in strollers, past joggers heading for the Esplanade along the Charles River. He felt as if his future, perhaps even his life, hung in the balance while all around him the world followed a serene course.

In the garage bay the Porsche had acquired a fine patina of city grime. Schlichtmann had owned the car for almost two years, yet he’d driven it less than five thousand miles. Throughout the winter it had sat unused in the garage. When Schlichtmann’s girlfriend had tried to start the car one weekend this spring, she’d discovered the battery was dead. She had the battery charged and took the Porsche out for a drive, but then James Gordon told her the insurance had lapsed and she shouldn’t drive it anymore.

Schlichtmann drove the car back to Pinckney Street and handed the keys to the sheriff, who took out a screwdriver and began to remove the license plate. Schlichtmann stood on the sidewalk and watched, his arms folded. The sheriff shook open a green plastic garbage bag and collected audio cassettes and papers from the dashboard. In the cramped backseat of the Porsche, he found some law books and several transcripts of depositions in the civil action of
Anne Anderson, et al.
, v.
W. R. Grace & Co., et al
. The sheriff dumped these into the garbage bag, too. He worked methodically and did not say much—he’d long since learned that most people did not react warmly to his presence. But the transcripts made him curious. “You’re a lawyer?” the sheriff asked.

“You involved in that case?”

Schlichtmann said he was. The jury had been out for a week, he added. He felt certain they would reach a verdict on Monday.

The sheriff said he’d seen the woman, Anne Anderson, on the television program
60 Minutes
. He handed Schlichtmann the garbage bag and asked him to sign a receipt. Then he squeezed his bulk into the driver’s seat and turned on the ignition. “Nice car,” he said. He looked up at Schlichtmann and shook his head. “It must be a tough case.”

Schlichtmann laughed at this. The sheriff laughed, too, and said, “Well, good luck.”

Schlichtmann stood on the curb and watched as the sheriff turned the Porsche onto Brimmer Street and disappeared. He thought to himself: Easy come, easy go.

Two days later, on Monday morning, Schlichtmann dressed in one of his favorite suits (hand-tailored by Dmitri of New York), his best pair of Bally shoes, and a burgundy Hermès tie that he considered lucky. Usually he took a taxi to the federal courthouse in downtown Boston, but since he had no money on this morning, he had to walk. On his way across the Boston Common a man in a grimy coat, his belongings gathered into a green plastic trash bag, approached Schlichtmann and asked for money. Schlichtmann told the man he had none.

Schlichtmann walked on, struck suddenly by the precariousness of one’s position in life. In a technical sense he was close to being homeless himself. His condominium association had just filed a lawsuit against him for failing to make a single maintenance payment in the last six months. He was also in arrears on his first, second, and third mortgages. By the time the jury had started deliberating, after seventy-eight days of trial, all the money was gone. “You’re living on vapor,” James Gordon had told Schlichtmann and his partners. The few dollars that came into the firm of Schlichtmann, Conway & Crowley each week were the result of old business, fees on cases long since settled. It amounted to no more than fifteen hundred a week. Salaries for the secretaries and paralegals alone were four thousand. American Express had filed suit against the firm. There had been no payment for more than four months on twenty-five thousand dollars of credit-card debt. Heller Financial, a leasing company, had threatened to repossess the law firm’s computer terminals by August 1. If he lost this case, Schlichtmann would be sunk so deeply into debt that it would take five years, Gordon estimated, for him to climb back to even.

But money was the least of Schlichtmann’s worries. Oddly, for a man of lavish tastes, he didn’t care that much about money. He was much more frightened of having staked too much of himself on this one case. He was afraid that if he lost it—if he’d been
that
wrong—he would lose something of far greater value than money. That in some mysterious way, all the confidence he had in himself, his ambition and his talent, would drain away. He had a vision of himself sitting on a park bench, his hand-tailored suits stuffed into his own green plastic trash bags.

In the courtroom corridor at a quarter to eight, perspiring slightly from his walk, Schlichtmann began waiting. He knew this corridor intimately. Usually he stood near a heavy wooden bench, somewhat
like a church pew, which was located directly across from the closed door of Judge Walter J. Skinner’s office. At the end of the corridor, next to a pay phone, a pair of heavy swinging doors opened into Judge Skinner’s courtroom. Schlichtmann had spent hundreds of hours in there and he had no desire to go back in now. He preferred the corridor. The opposite end was a city block away, past a bank of elevators, past a dozen closed doors that led to jury rooms, conference rooms, and offices. There were no windows in the corridor. It looked the same at eight o’clock in the morning when Schlichtmann arrived as it did when he left at four in the afternoon. The lighting fixtures were old fluorescent models, recessed into the ceiling, and they cast a feeble light, like dusk on an overcast day. The corridor smelled of floor polish and disinfectant and stale cigarette smoke.

At around eight o’clock, the jurors began arriving for their day of work. They conducted their deliberations in a small room at the end of the corridor, up a narrow flight of stairs, a room that Schlichtmann had never seen. Some mornings two or three of the jurors arrived together, talking among themselves as they got off the elevator. They always fell silent as they neared Schlichtmann. They might smile, a tight, thin, constrained smile, or nod briskly to him. Schlichtmann looked studiously down at the floor as they walked past him, but from the corners of his eyes he watched every step they took. He studied their demeanor and their dress and tried to guess their moods.

The jurors’ footsteps receded. In a moment, Schlichtmann was alone again.

Duel At Grimwood Creek (Book 2) by Lucas Thorn
Family Tree by SUSAN WIGGS
Travelers by Ruth Prawer Jhabvala
A Song of Shadows by John Connolly
Every Boy's Got One by Meg Cabot
Misfortune Market: A HASEA CHRONICLES STORY (BOOK 1.5) by Stuart Meczes
Fires of London (The Francis Bacon Mysteries) by Law, Janice
The Camelot Code by Sam Christer
The Dragon's Eye by Dugald A. Steer
The Supernaturals by David L. Golemon
Our partner