Read A Conspiracy of Faith Online

A Conspiracy of Faith 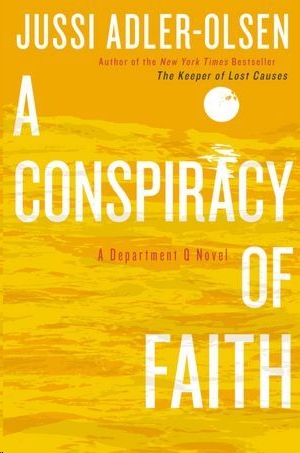 The Keeper of Lost Causes

For more information about the Penguin Group visit penguin.com.

has been applied for.

Dedicated to my son, Kes

It was the third
morning, and the smell of tar and seaweed had got into his clothes. Under the boathouse floor, the mush of ice lapped soundlessly against the wooden stilts and awakened memories of days when everything had been all right.

He lifted his upper body from the bedding of wastepaper and pulled himself sufficiently upright to make out his younger brother’s face, which even in sleep seemed tormented, chilled to the bone.

Soon, he would wake and glance around in panic. He would feel the leather straps tight on his wrists and waist and hear the jangle of the chain that constrained him. He would see the snowstorm and the light as it struggled to penetrate the tarred timber planks. And then he would start to pray.

Countless times he’d seen desperation in his brother’s eyes. Through the gaffer tape that covered his mouth came the repeated sound of his muffled pleas that Jehovah have mercy upon them.

Yet both of them knew that Jehovah no longer paid heed, for blood had passed their lips. Blood that their jailer had let drip into their cups. The cups from which he had allowed them to drink before revealing to them what they had contained. They had drunk water, but in the water was blood, so forbidden, and now they were damned forever. And for that reason, shame pierced deeper even than thirst.

What do you think he’ll do to us?
his brother’s frightened eyes seemed
to ask. But how could he ever know the answer? All he knew, instinctively, was that it would all soon be over.

He leaned back and scanned the room once again in the dim light, allowing his gaze to pass across the collar beams and through the formations of cobwebs, noting each and every projection, each and every knot. The worn paddles and oars that hung from the apex of the ceiling. The rotten fishing nets that had long since made their last catch.

And then he discovered the bottle. A gleam of sunlight played momentarily on the blue-white glass to dazzle him.

So near, and yet so hard to reach. It was just behind him, wedged between the thick, rough-hewn planks of the floor.

He stuck his fingers through the gap and tried to prize the bottle upward by the neck, but the air froze upon his skin. When the thing came loose, he would smash it and use the shards to cut through the strap that kept his hands tied tight together behind his back. And when it succumbed, his numb fingers would find the buckle at his spine. He would loosen it, tear the tape from his mouth, remove the straps from around his waist and thighs, and as soon as the chain that was fastened to the leather strap at his waist no longer held him back, he would lunge forward and free his brother. He would draw him toward him and hold him tight until their bodies ceased to tremble.

Then, he imagined, he would use all his strength to gouge into the timber around the door with the broken glass. He would see if he could hollow out the planks to which the hinges were fixed. And if the worst should happen and the car came before he was finished, he would lie in wait for the man. He would stand poised behind the door with the broken glass in his hand. That was what he told himself he would do.

He leaned forward, folded his freezing fingers behind his back and prayed for forgiveness for his wicked thought.

Then he scraped again in the space between the planks to try to free the bottle. He scraped and scratched until the neck angled enough for him to grab hold of it.

Was that an engine? Yes, it was. The powerful engine of a large car. But was it approaching or simply passing by in the distance out there?

For a moment, the low, deep sound seemed to get louder. He began to pull so desperately at the neck of the bottle that his knuckles cracked audibly. But then the sound died away. Had it been the wind turbines, rumbling and whirring? Maybe it was something else entirely. He had no idea.

He expelled warm breath from his nostrils. It steamed the air around his face. He wasn’t so afraid anymore, not now. As long as he thought about the grace of Jehovah, he felt better.

He pressed his lips together and labored on. And when finally the bottle came free, he struck it so hard against the timber of the floor that his brother lifted his head with a startled jolt and looked around in terror.

Again and again he brought the bottle down against the floor. It was hard to get purchase with his hands behind his back. Too hard. Eventually, when his fingers were no longer able to maintain their grip, he let the bottle slide from his hand, turned himself around, and stared emptily at it as dust gently descended from the beams through the cramped space.

He couldn’t break it. He simply wasn’t able. A pathetic little bottle. Was it because they had drunk blood? Had Jehovah abandoned them?

He looked at his brother, who rolled himself slowly into his blanket and fell back onto his bedding. He was silent, not even attempting to mumble a word through the tape that sealed his lips.

It took a while to gather the things he needed. The hardest part was stretching himself, confined by his chain, to reach the tar between the roofing planks with the tips of his fingers. Everything else was at hand: the bottle, the sharp sliver of wood from the timbered floor, the paper on which he was sitting.

He pushed off one of his shoes and stabbed so sharply at his wrist with the wood that tears welled in his eyes. He let the blood drip onto his polished shoe for a minute, perhaps two. Then he tore a large shred of paper from his bedding, dipped the splinter in his blood, and twisted his body,
pulling at his chain until he was able to see what he was writing behind his back. As best he could, and in the smallest handwriting, he put down in words what was happening to them. When he had finished, he signed the letter with his name, rolled up the paper, and stuffed it inside the bottle.

He allowed himself plenty of time to press the lump of tar down into the neck. He shifted his weight so as to see better, and checked and double-checked to make sure it was well done.

When finally there was no more to do, he heard the dull sound of a car engine. This time there was no mistake. He cast a pained glance at his little brother and stretched with all his might toward the light that seeped in through a broad crack in the timbered wall, the only opening through which the bottle would be able to pass.

Then the door was opened and a thick shadow entered amid a flurry of white snow.