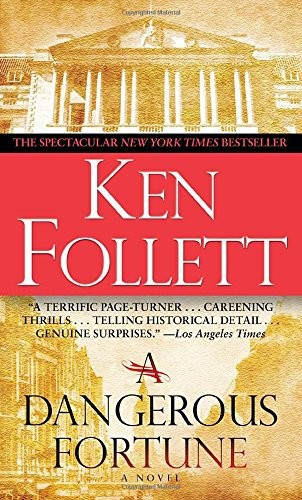 #1 BESTSELLING, AWARD-WINNING AUTHOR
of
Night Over Water, The Pillars of the Earth,
Eye of the Needle
, and
The Key to Rebecca

AND HIS LATEST NOVEL

“Confirms his reputation as a master storyteller.”

“FOLLETT [BUILDS] TO A DRAMATIC CLIMAX WITH THE SAME MASTERFUL CONTROL THAT GUIDED
EYE OF THE NEEDLE
AND
THE PILLARS OF THE EARTH
.”

“I don’t usually enjoy historical thrillers but admit to being totally captivated by Ken Follett’s
A Dangerous Fortune
.”

“RICH, COMPLEX, THRILLING, SUSPENSEFUL. WELL PLOTTED …
A DANGEROUS FORTUNE
IS DANGEROUS READING. YOU WON’T BE ABLE TO PUT IT DOWN.”

“KEN FOLLETT IS A WRITER WITH A GENIUS FOR THREADING THE EYE OF THE LITERARY NEEDLE.”

“ANOTHER WINNER … Gripping reading, heavy on historical color and detail.”

“A spellbinding tale of tension, ambition, and greed.”

“Follett is a great storyteller.”

A DANGEROUS FORTUNE
NIGHT OVER WATER
THE PILLARS OF THE EARTH
PAPER MONEY
LIE DOWN WITH LIONS
THE MODIGLIANI SCANDAL
ON WINGS OF EAGLES
THE MAN FROM ST. PETERSBURG
THE KEY TO REBECCA
TRIPLE
EYE OF THE NEEDLE
THE BIG NEEDLE
THE HAMMER OF EDEN
A PLACE CALLED FREEDOM
THE THIRD TWIN

THE FAMILY TREE
OF THE

ON THE DAY OF THE TRAGEDY
, the boys of Windfield School had been confined to their rooms.

It was a hot Saturday in May, and they would normally have spent the afternoon on the south field, some playing cricket and others watching from the shady fringes of Bishop’s Wood. But a crime had been committed. Six gold sovereigns had been stolen from the desk of Mr. Offerton, the Latin master, and the whole school was under suspicion. All the boys were to be kept in until the thief was caught.

Micky Miranda sat at a table scarred with the initials of generations of bored schoolboys. In his hand was a government publication called
Equipment of Infantry
. The engravings of swords, muskets and rifles usually fascinated him, but he was too hot to concentrate. On the other side of the table his roommate, Edward Pilaster, looked up from a Latin exercise book. He was copying out Micky’s translation of a page from Plutarch, and now he pointed an inky finger and said: “I can’t read this word.”

Micky looked. “Decapitated,” he said. “It’s the same word in Latin,
decapitare
.” Micky found Latin easy, perhaps because many of the words were similar in Spanish, which was his native language.

Edward’s pen scratched on. Micky got up restlessly
and went to the open window. There was no breeze. He looked wistfully across the stable yard to the woods. There was a shady swimming hole in a disused quarry at the north end of Bishop’s Wood. The water was cold and deep….

“We could go out through the synagogue.” The “synagogue” was the room next door, which was shared by three Jewish boys. Windfield School taught divinity with a light touch and was tolerant of religious differences, which was why it appealed to Jewish parents, to Edward’s Methodist family, and to Micky’s Catholic father. But despite the school’s official attitude, Jewish boys came in for a certain amount of persecution. Micky went on: “We can go through their window and drop onto the washhouse roof, climb down the blind side of the stable and sneak into the woods.”

The Striper was the ash cane wielded by the headmaster, Dr. Poleson. The punishment for breaking detention was twelve agonizing strokes. Micky had been flogged once by Dr. Poleson, for gambling, and he still shuddered when he thought of it. But the chance of getting caught was remote, and the idea of undressing and slipping naked into the pool was so immediate that he could almost feel the cold water on his sweaty skin.

He looked at his roommate. Edward was not well liked at school: he was too lazy to be a good student, too clumsy to do well in games and too selfish to make many friends. Micky was the only friend Edward had, and Edward hated Micky to spend time with other boys. “I’ll see if Pilkington wants to go,” Micky said, and he went to the door.

“No, don’t do that,” said Edward anxiously.

“I’m not scared,” Edward said implausibly. “I’ve got to finish my Latin.”

“Then finish it while I go swimming with Pilkington.”

Edward looked stubborn for a moment, then caved in. “All right, I’ll go,” he said reluctantly.

Micky opened the door. There was a low rumble of noise from the rest of the house, but no masters to be seen in the corridor. He darted into the next room. Edward followed.

Two of the boys were playing cards at the table. They glanced up at him then continued their game without speaking. The third, Fatty Greenbourne, was eating a cake. His mother sent him food all the time. “Hello, you two,” he said amiably. “Want some cake?”

“By God, Greenbourne, you eat like a pig,” Micky said.

Fatty shrugged and continued to tuck into his cake. He suffered a good deal of mockery, being fat as well as Jewish, but none of it seemed to touch him. His father was said to be the richest man in the world, and perhaps that made him impervious to name-calling, Micky thought.

Micky went to the window, opened it and looked around. The stable yard was deserted. Fatty said: “What are you fellows doing?”

Micky sat on the windowsill, rolled over onto his stomach, wriggled backwards and then dropped the few inches onto the sloping roof of the washhouse. He thought he heard a slate crack, but the roof held his weight. He glanced up and saw Edward looking anxiously
out. “Come on!” Micky said. He scrambled down the roof and used a convenient drainpipe to ease himself to the ground. A minute later Edward landed beside him.

Micky peeked around the corner of the washhouse wall. There was no one in sight. Without further hesitation he darted across the stable yard and into the woods. He ran through the trees until he judged he was out of sight of the school buildings, then he stopped to rest. Edward came up beside him. “We did it!” Micky said. “Nobody spotted us.”

“We’ll probably be caught going back in,” Edward said morosely.

Micky smiled at him. Edward was very English-looking, with straight fair hair and blue eyes and a nose like a broad-bladed knife. He was a big boy with wide shoulders, strong but uncoordinated. He had no sense of style, and wore his clothes awkwardly. He and Micky were the same age, sixteen, but in other ways they were very different: Micky had curly dark hair and dark eyes, and he was meticulous about his appearance, hating to be untidy or dirty. “Trust me, Pilaster,” Micky said. “Don’t I always take care of you?”

They followed a barely discernible path through the wood. It was a little cooler under the leaves of the beech and elm trees, and Micky began to feel better. “What will you do this summer?” he asked Edward.

“We usually go to Scotland in August.”

“Do your people have a shooting-box there?” Micky had picked up the jargon of the English upper classes, and he knew that “shooting-box” was the correct term even if the house in question was a fifty-room castle.

“They rent a place,” Edward replied. “But we don’t shoot over it. My father’s not a sportsman, you know.”

Micky heard a defensive note in Edward’s voice and pondered its significance. He knew that the English aristocracy liked to shoot birds in August and hunt foxes all
winter. He also knew that aristocrats did not send their sons to this school. The fathers of Windfield boys were businessmen and engineers rather than earls and bishops, and such men did not have time to waste hunting and shooting. The Pilasters were bankers, and when Edward said “My father’s not a sportsman” he was acknowledging that his family was not in the very highest rank of society.

It amused Micky that Englishmen respected the idle more than people who worked. In his own country, respect was given neither to aimless nobles nor to hardworking businessmen. Micky’s people respected nothing but power. If a man had the power to control others—to feed or starve them, imprison or free them, kill them or let them live—what more did he need?

“What about you?” Edward said. “How will you spend the summer?”

“You’re not staying at school all through the vacation again?”

“I have to. I can’t go home. It takes six weeks one way—I’d have to start back before I got there.”

In fact Micky had no wish to go back. He loathed his home, and had done since his mother died. There were only men there now: his father, his older brother Paulo, some uncles and cousins, and four hundred cowboys. Papa was a hero to the men and a stranger to Micky: cold, unapproachable, impatient. But Micky’s brother was the real problem. Paulo was stupid but strong. He hated Micky for being smarter, and he liked to humiliate his little brother. He never missed a chance to prove to everyone that Micky could not rope steers or break horses or shoot a snake through the head. His favorite trick was to scare Micky’s horse so it would bolt, and Micky would have to shut his eyes tight and hang on,
scared to death, while the horse charged madly across the pampas until it exhausted itself. No, Micky did not want to go home for the vacation. But he did not want to remain at school, either. What he really wanted was to be invited to spend the summer with the Pilaster family.

Edward did not immediately suggest this, however, and Micky let the subject drop. He felt sure it would come up again.

They clambered over a decaying picket fence and walked up a low hill. As they breasted the rise they came upon the swimming hole. The chiseled sides of the quarry were steep, but agile boys could find a way to scramble down. At the bottom was a deep pool of murky green water that contained toads, frogs and the occasional water snake.

To Micky’s surprise, there were also three boys in it.

He narrowed his eyes against the sunlight glinting off the surface and peered at the naked figures. All three were in the lower fourth at Windfield.

The mop of carrot-colored hair belonged to Antonio Silva, who despite his coloring was a compatriot of Micky’s. Tonio’s father did not have as much land as Micky’s, but the Silvas lived in the capital and had influential friends. Like Micky, Tonio could not go home in the vacations, but he was lucky enough to have friends at the Cordovan Ministry in London, so he did not have to stay at the school all summer.

Shadowrun - Earthdawn - Mother Speaks by kubasik
House of Sin: Part One by Vince Stark
The Daughters of Juarez: A True Story of Serial Murder South of the Border by Teresa Rodriguez, Diana Montané
RICKY: A Sweet Western Historical Romance (Mail-Order Brides Club Book 5) by Ashley Merrick
Sunrise by Mike Mullin
The Art of Murder by Michael White
This Is Not a Test by Courtney Summers
Hostage (Predators MC #3) by Jamie Begley
Starfire by Dale Brown
The Beast by Hugh Fleetwood
Our partner