A Deep and Dark December 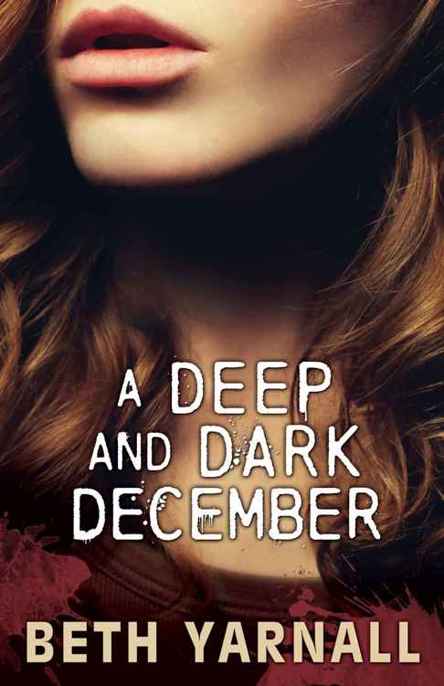 To stay up to date on the latest Beth Yarnall happenings, including new releases, sales, special announcements, exclusive excerpts, and giveaways, subscribe to my newsletter:
SUBSCRIBE

I dedicate this book—the hardest book I’ve ever written—to the authors of The Keeper Shelf who have supported me in numerous, varied, and profoundly necessary ways. You are my New York.

And to my husband, Mr. Y, for buying into and supporting every single one of my crazy Lucy and Ethel schemes…including the one where I thought I could write a book.

There weren’t a great many things that bothered Erin December. For the most part, she considered herself a pretty even-keeled person. So why was her face hot and the back of her throat aching with the words she couldn’t let loose? As she sat in the Kavender Investments staff meeting, listening to Ramie Kavender heap praise on Austin for the success of the Petrie project, she couldn’t believe what she was hearing. That son of a bitch Austin accepted the compliments as if they were his due, never once daring to glance her direction or acknowledge that she had any part in the project, let alone admitting she had done the bulk of the work.

She reminded herself that she was grateful for the job. The tiny town of San Rey, in central California, had been hit hard by the downturn in the economy. Kavender Investments was one of the few companies thriving amongst speculation of another recession. Without this job, she might be forced to leave the town she grew up in and move to a bigger town like Santa Barbara or Los Angeles. She liked her job and most of the people she worked with. She was confident in her work in a way she’d never been in any other position she’d ever held.

But that didn’t mean she liked being stepped on by Austin on his way to a higher title.

As soon as the meeting was over, she escaped to the relative quiet of her cubicle. She pulled up the report she’d been working on before the meeting began and started to recheck the data one last time before she turned it in. A shadow fell over her.

“I have a favor to ask,” her boss Ramie said.

She turned in her chair.

“Chelsea went home sick. She had a Cash for Keys appointment this afternoon at four. Can you take it? Should be quick. You can go straight home from there.”

That was in half an hour and she still had the report to finish. “Sure.”

“Thanks. I owe you one.” He dropped the folder on the top of her already teetering stack and strode away.

She suppressed a sigh and reached for the file. The tab had the name Lasiter on it. She knew a Greg Lasiter from high school. Opening the file, she confirmed that it was
the
Greg Lasiter she’d be meeting with. Great. Just great. He was an asshole back then and while he didn’t waste time picking on her anymore, he wasn’t exactly nice.

The words in the file blurred, then blacked over. Her body seemed to shoot back as though she were on a rollercoaster, pain searing between her eyes. The sensation made her stomach dip. She knew what this was. She hadn’t experienced this loss of control since she’d first come into her ability when she was eight. Shoved suddenly from one reality into another against her will, she found herself standing on the front porch of the Lasiter house. She worked to steady her breathing. Leaves danced across the lawn, the wind whipping them up, then sending them scattering.

She hadn’t called up this vision. She hadn’t chosen to be here in this time or this place. Trying to get her bearings, she glanced back at the neighborhood she’d walked through once upon a time on her way to and from elementary school. The street was empty.

She never used her ability. Ever. Only her Aunt Cerie and her father, Donald, knew what she could do. She kept it that way on purpose, holding her secret inside since the night her mother had left and never came back.

In the vision she was herself, knocking on the door of the Lasiter house, calling out for Greg. No answer. She pushed the doorbell and rapped on the door again. Silence. She shuddered from a chill she couldn’t feel. Something was off.

Not real
, she reminded herself. Her body still sat at her desk, but her mind had traveled through time. Was this the past or future? Why was she here?
How
did she get here? What did this loss of control over her ability mean?

Turning the knob, she expected it to be locked, but it turned easily. She walked into an empty living room, stripped of furniture or anything that made it a home.

“Greg?” she heard herself call out. “It’s Erin December from Kavender Investments. Hello? Anyone here?”

A light around a door at the end of the living room drew her attention. Her steps weighted, she found she couldn’t stop. Any of it. Not her body from moving forward nor her mind from staying in the vision. She was stuck. Left with no choice. She closed her eyes, using the tools she’d been taught to search for a way out. But there was no ending it. The shock of that radiated through her. This had never happened before either. She’d
always
been able to pull out of a vision.

She put a hand out and opened the door. It swung away, revealing a small kitchen. Greg lay on the floor face up, a pool of blood around him.

She gasped and stumbled back.

As abruptly as she was sucked into the vision, she was spit right back out. She dragged in air, gripping the edge of her desk.
It wasn’t real. It wasn’t real.

The file still lay open on her desk. The office seemed to go on about its business around her, oblivious to what she’d just gone through. She pulled her phone out to call her aunt to tell her what had happened and saw the time. A quarter to four. She had fifteen minutes to get to Greg’s house. Greg. She should call for someone to save him. She punched in 9-1 then hesitated, her thumb hovering over the second one. What would she say? Who would believe her if she told them what she’d seen in her vision?

She wasn’t supposed to use her ability to change the future. That lesson had been drummed into her at an early age, from the first flickers of her ability asserting itself. If she changed one thing, it could potentially change a thousand little things. A man was dead. Or would be dead. Certainly there were exceptions. But wouldn’t saving him be the absolute worst-case scenario? Could she live with herself if she did nothing? What choice was there?

She put on her coat and grabbed her purse and the Lasiter file. There was something wrong with her ability for sure. It was out of whack, totally out of her control. Maybe it wasn’t true. Maybe her vision was wrong.
Please let it be wrong.

She pushed through the door of the building where Kavender Investments had offices and onto Main Street. The people of San Rey went about their day. She envied them. She’d never wanted her ability, never wanted to be marked as different. She’d only ever wanted to fit in. Born into a family that didn’t hide who they were, Erin felt like an outcast there too, keeping her ability a secret and never using it. She passed through town, attracting her usual amount of odd stares and whispers. She was used to it, but today she challenged their stares, glaring back when she would’ve glanced away.

She quickened her pace, keeping an eye on the sky, which seemed to increase its threat of rain with every step she took. It was the kind of sky her superstitious Aunt Cerie called volcanic, a portent of violence. Erin didn’t subscribe to her aunt’s superstitions, but she certainly wished she hadn’t left her umbrella in her car, and her car with her aunt. That’s what Erin got for loaning it to Cerie and for wearing suede heels on a day with a forty percent chance of rain.

Couldn’t she catch a break just once?

She gripped the leather handle of her bag tighter as she broke into a jog, hoping to get to the house before the sky opened up. Not that she was in any hurry to get there. She passed homes, some vacant, some close enough that they’d taken on the same hollowed out look. The economic downturn had hit San Rey especially hard.

She opened the front gate of Greg Lasiter’s house, releasing the leaves stuck to it, and slowly made her way up the front walk. At the door, she hesitated and prepared herself for the reality of the images that had assailed her when she’d touched the property file. A simple Cash for Keys, Ramie had said.

But nothing was ever simple in Erin’s world.

Taking a deep breath, she knocked. If her vision were true, no one would answer.
Please let Greg answer.
Brushing the shards of flaked gate paint from her fingers, she was tempted to just pull out her cell phone and place the call she’d started at the office. But that’s not how it worked. If her vision was real, the scene had to play out exactly as she’d seen it.

She felt stupid calling him Mr. Lasiter instead of Greg. He was only a year older than she was. She’d had a stupid unrequited crush on him her freshman year of high school. And now she was standing on his dilapidated porch, supposedly waiting for him to open the door so she could take the keys to his home. The home he’d grown up in. She shouldn’t feel guilty about that and yet she did.

Inside, the house was silent. Outside, the only sound was the whoosh of wind, lifting the curling ends of her brown hair, bringing with it the briny tinge of the ocean and a chill that bit right through her wool coat. Just like her vision. If Erin was smart she’d follow her instincts and run back the way she’d come. But she had her father’s practicality and a bank balance that didn’t allow for fear.

She had to see this through.

Still no answer. She’d hoped so hard that what she’d seen would be as wrong as the way it had come to her. She closed her eyes and silently chanted the words of protection she’d been taught as a child, mentally drawing a shield around herself. Focusing her energy, she took three deep breaths, letting each of them out slowly, preparing herself for the possible reality of what she’d only seen in her mind.

She opened her eyes and turned the knob. Locked. She hadn’t expected that. Her visions
never
wavered. For a moment, she didn’t know what to do. The wrongness poked at her.

Careful what you wish for.

Maybe there was a key. She searched the usual places—under the doormat, above the door, the light fixture, a dead potted plant—there.

Blushing at Both Ends by Philip Kemp
Moondance of Stonewylde by Kit Berry
The Vengeance of the Vampire Bride by Rhiannon Frater
She Will Rejoice by Riker, Becky
Ring of Fire by Pierdomenico Baccalario
A Family Kind of Wedding by Lisa Jackson
Poeta en Nueva York by Federico García Lorca
Roman Holiday: The Adventure Continues by Ruthie Knox
InSpire by April Wood
Faith by Viola Rivard
Our partner