Read A Dinner to Die For Online

A Dinner to Die For 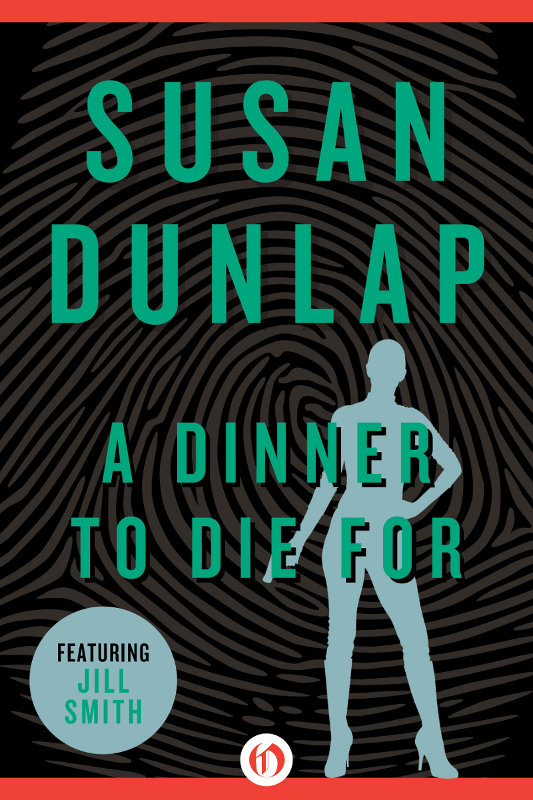 A Dinner to Die For
Susan Dunlap

For Bernadette and Douglas Croy

A Biography of Susan Dunlap

I stared at the glossy in-flight magazine as the 747 headed west toward the Sierras and then on into Oakland International Airport. Beside me the window looked out on darkness. The lights of Reno were off to the right, the captain had just announced, but I couldn’t make myself look down.

On the flight
to
Florida I had insisted on an aisle seat. Now, a month later, I was better. I had ridden in a car without covertly bracing my feet against the floorboards; I had progressed from merely turning my head toward the side window when we crossed the Florida drawbridges, to staring into the distance, stiffly pretending there was no water below, to taking quick glances at it. Toward the end of the month, my throat had ceased to tighten as much, my stomach hadn’t jumped as much, or maybe by then I was bracing my neck and stomach so automatically that they seemed normal that way. From the bare rise of the drawbridges the water beneath no longer looked as if it were gushing up to swallow me.

But the bridges had been only thirty feet above the water. They had just been practice for today. Soon, I promised myself, I would look down—when we started to descend toward Oakland; I
would
look down.

But not yet. I still had a few more minutes’ respite between the charade of healthiness I had performed for my parents all month and the tough facade I’d need when the plane landed. It wouldn’t do for a homicide detective to admit to panic, particularly not a woman detective.

Clutching my remaining moments, I turned to page 54 of the magazine. It was a collage of Berkeley history and gastronomy: photos of Mario Savio leading the Free Speech Movement of the sixties; National Guardsmen pointing rifles at the People’s Park marchers of the early seventies; the vine-covered gate of Chez Panisse, Berkeley’s most famous restaurant; a couple eating tapas by the fire in Augusta’s; and Mitch Biekma in the eccentric front yard of Paradise, the newest of the gourmet restaurants in town. It was hard to tell from the picture whether Mitch Biekma, the spiked-haired owner of Paradise, was looking down at his front garden or at the text of the article superimposed over it. Whichever, it seemed to amuse him.

The loudspeaker cackled. My breath caught. The speaker clicked off—no word of descent yet. The air flooded out from the overhead nozzle; it was too warm. Why couldn’t they regulate these planes? The man next to me shifted in his sleep, sending out waves of sickly sweet after-shave. Tensely, I stared at the photo of Biekma, following his glance to the printed text:

The city of Berkeley, California, sits next to San Francisco Bay, almost as far west as you can get, or, some would say, as far left. Berkeley has a long and flamboyant history of radical politics. The Free Speech Movement on the University of California campus there gave birth to the student protests that would change the next two decades. Berkeley is a nuclear-free zone, and a sanctuary city. But when it came to pollution, this bastion of peace turned really militant, blocking off streets, installing the most expensive metered parking in the area, and mandating nonsmoking sections in every restaurant. That militancy peaked to crusade proportions in city council elections, bitter campaigns between the infantry of the radical slate and the flying columns arrayed against it. Even elections for the board of the Berkeley Co-op food stores have been major skirmishes.

But there’s a flip side to those Spartan warriors, an epicurean side. In recent years Berkeleyans have been abandoning the organic lettuce and alfalfa sprouts of their co-ops for the gourmet greens in Park and Shop, a chain which has been called the wonderland of supermarkets. Stalwarts who once walked picket lines now queue up for reservations at gourmet restaurants. What they spend on one dinner would support a striker’s family for a week. Has Berkeley gone the way of the yuppie?

I smacked the magazine down on my knee, startling the after-shave-coated man to my left. His head twitched, his shoulders jumped, but his eyes remained closed. Who was this—I looked back at page 54—this Lee Lewis, and where did he or she get off with this smug tone about my city?

I almost smiled. I hadn’t realized how much I missed Berkeley. After a month convalescing at my parents’—a month of hearing their friends brag of chairmen-of-the-board sons and mother-of-four daughters, of seeing pictures of babies that all looked alike; a month of tearful entreaties to find a job that wouldn’t endanger my life, to find a husband who would take care of me, to move to a real house—I longed for the Berkeley that cherished the freedom of nonconformity, the Berkeley that honored those who postponed real jobs with health insurance and dental plans in order to write poetry, design leaded-glass windows, or collect unsalable but edible food from the groceries to feed the hungry. And I longed for the innocence of my life before I had been forced to realize it could end at any moment.

That life had died when the helicopter crashed.
I
could have died. But I hadn’t, and I wasn’t about to take the chance of waiting again. I’d given notice on my flat. Now I didn’t know where I would be living. (I would be house-sitting somewhere in town for the next month.) I didn’t even know what the status was between Seth Howard and me. Before the crash we had been buddies, buddies with the suggestion of something more dancing ever out of reach. Afterwards, we’d tacitly acknowledged things were different. Different how, we hadn’t discussed. I didn’t know if Howard knew. I wasn’t sure I did.

“In preparation for landing we ask that you bring your seat backs to an upright position, and put your tray tables up,” a stewardess announced. “Please extinguish cigarettes at this time. It will be necessary to collect all glasses and cups now.” The plane sucked back as it began the first slowing of descent. Engines roared in protest. My stomach jumped. Slowly, I turned my head to face the black square of the window. But the 747 window faded; it was the rain-streaked window of the helicopter cockpit I saw, with the copter reeling a thousand yards above the bay waters. I pressed my eyes shut. There was no need to look down yet. The captain hadn’t said we were landing. He hadn’t mentioned Oakland, officially. I didn’t have to look down.

Pushing away the memory of that cockpit, of the cold bay wind that streaked through the open doors, I breathed in the safe jumbo-jet air and stared down at the magazine.

From the stridently heralded Spartan ideals of the sixties, the rise of the Gourmet Ghetto was an abrupt about-face into the lap—or the palate—of conspicuous consumption. Within a few-block area surrounding Shattuck Avenue in north Berkeley, the eager gourmet can find a variety of pâtés, truffles, cheese from French Raclette to Spanish Manchego, fresh arugula and wood blewit mushrooms, just-caught coho salmon, whole-bean decaffeinated Sumatra coffee or Darjeeling Extra Fancy Selimbong tea.

But, in fact, the Gourmet Ghetto is not merely a long-suppressed burst into epicurean materialism; the California Cuisine, which is the mainstay of the Ghetto, could have been born few other places. It needed the sophistication the university graduates brought to it. It needed their fond memories of sun-dried tomatoes in Salerno, mâche lettuce in Nice. And it needed the old leftist ethic of Berkeley, the willingness to forego big bucks and retirement plans in order to create exquisite experience. Disdaining any but the freshest ingredients—baby carrots grown in friends’ gardens, goat cheese from goats with bloodlines worthy of a Hohenzollern—these largely self-taught chefs (many with some European training) have transformed the heaviness of continental cuisine by such innovations as the use of pureed vegetables instead of flour to thicken sauces. In the time-honored Berkeley tradition, they’ve experimented, viewing ingredients from wholly new angles, using them in untried ways, mixing fruits with meats and making little-known items like radicchio and rocket into household (or gourmet kitchen) words.

From the corner of Shattuck and Vine one need walk no more than three blocks to nearly thirty restaurants, gourmet shops, or boutiques—more than some entire states could boast.

Are those Berkeleyans who vied to discover the newest “in” cafe grateful for the availability of fresh mangoes, champagne sausages, and Pont l’Évêque cheese within one block? The answer is no. Transcending epicurism, Berkeleyans have come to realize man lives not by brioche alone. There is a higher need. That need is parking.

Rising rents have squeezed out hardware stores and shoe repair shops; neighbors are forced to drive across town for nongourmet necessities. And they return to find a BMW from Pleasant Hill or Walnut Creek parked in front of their houses while the drivers settle in for dinner at Paradise.

But in Berkeley tradition, the city council has come through for these curb-robbed underdogs. In doing so, it has produced yet another first: the Gourmet Ghetto Ordinance. The ordinance limits the number of restaurants and boutiques in the area to twenty-seven. Now the Nouvelle Croissant cannot open till the Old Bun goes under. Where will it end—this all-out war—creature comfort pitted against creature comfort? “A chicken in every pot and two cars in every garage” are no longer compatible in Berkeley.

But I didn’t continue. I had had enough. The plane jolted back; the engine roar increased. Was it always this loud? I stuffed the magazine into the seat pocket, knocking the sleeper’s knee. He jerked awake, launching a gaggingly sweet tidal wave. My tight stomach jumped, setting off its own wave of bile. I grabbed the armrests. On duty I had seen corpses with faces shattered by bullets, or smashed past recognition; I’d seen bodies so decomposed they were hardly recognizable as human. I’d controlled the urge to throw up then. I damn well wasn’t going to do it now.

“Good timing, huh?” he said, leaning in front of me to stare out the window. “Just about ready to hit the ground. That must be—what—Concord, Walnut Creek down there?”

I exhaled against the smell, and nodded.

“That’s the airport! And Oakland. Look, you can see the streetlights.”

I didn’t look. I squeezed my eyes shut. But the specter of the helicopter cockpit engulfed me: the briny smell of the air; the maelstrom whipping my hair; the sharp edge of the seat belt cutting my stomach as the copter flopped from side to side. I grabbed for the controls. It was too late. I couldn’t get the nose up; the ship plummeted toward the icy bay water.

My eyes sprang open. Swallowing hard, I stared at the tray-table latch in front of me, imprinting it on my mind to block out the moment when the copter hit. The engines shrieked and the floor of the plane seemed to slide forward as the seat recoiled. In a minute we’d be on the ground. There was no time to baby myself now. The helicopter crash was in the past; over; done. I had
now
to deal with. I
had
to look down. Haltingly, I turned my head. Hands clutching the armrests, I moved my gaze inch by inch down the scarred plastic of the window, from the black of the sky, down to the muted streetlights of the tree-covered hills, lower to Oakland and the blur of white lights. Holding my breath, I stared at them till they cleared into individual dots, white mixed with lines of yellow, specks of green and red.