Read A Dom for Christmas Online

A Dom for Christmas 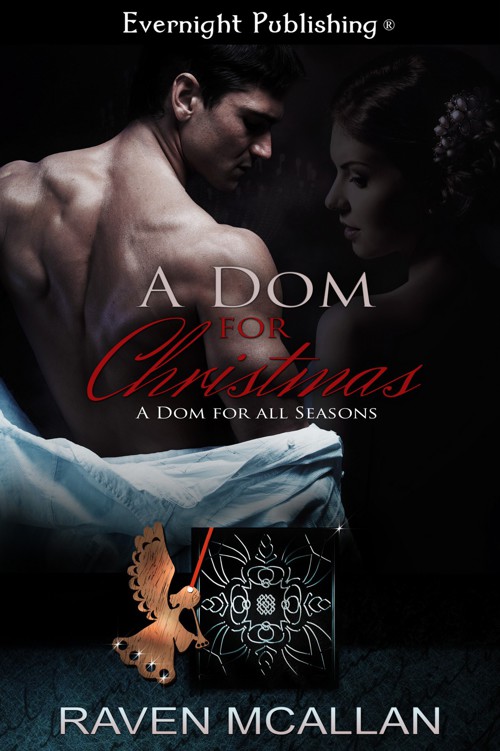 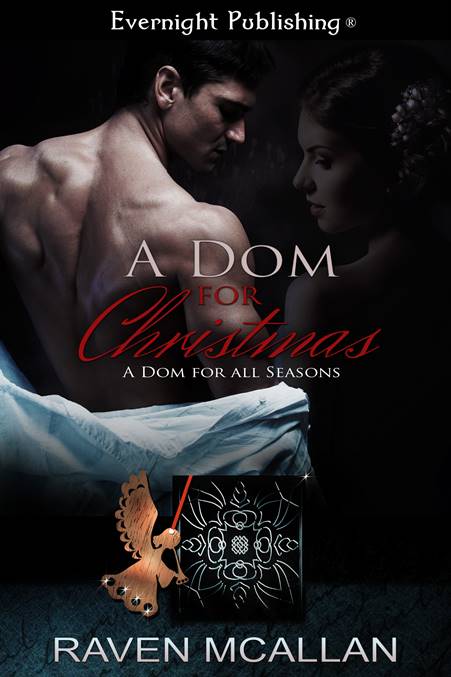 WARNING: The unauthorized reproduction or
distribution of this copyrighted work is illegal.

This is a work of fiction. All names, characters,
and places are fictitious. Any resemblance to actual events, locales,
organizations, or persons, living or dead, is entirely coincidental.

A
DOM FOR CHRISTMAS

A Dom for All Seasons, 1

“You’re not putting that thing
on the tree, surely?” The patronizing tone of her ex-boyfriend’s words set
Angie’s teeth on edge. She should have told him to bugger off when he came to
the door and said they needed to talk. But, she’d reasoned, her significant
other—oh how she loved saying that—would be home any minute, and then Stuart
would leave.

“Yes.” She didn’t ask why.
Instead she leaned on the stepladder she’d put next to her as yet unadorned
tree and contemplated where each precious-memory-filled ornament should go.

“Rubbish. It’s junk. Give it
here, and I’ll dispose of it for you.” He held out his hand.

Why hadn’t she realized before
how pale and effete his fingers were? And that he always looked shifty.

“No thank you, it’s mine. I
think it’s time you left.” She had no idea why he’d turned up, anyway. She’d
told him in no uncertain terms it was over, when she’d shown him the door.
Anyone would think he didn’t believe her.

“Angie. What’s wrong with
proper decorations, not some dirty, battered old bit of wood decorated so
tawdrily. This tree will have about as much taste as that awful fish soup
you’re so fond of.”

Angie didn’t answer him. She liked the fish
soup.
As for taste?
Thank goodness he didn’t know how
she’d decorated the tree in the other room.
Shibari
rope instead of tinsel, handcuffs, and nipple clamps decorated with ribbons and
bows would give Stuart all the ideas she didn’t want him to have. They were for
her and her Dom, no one else. Her nipples tightened and her pussy
spasmed
as she thought of just what he’d demanded and
received as each item was lovingly used on her, before it was put onto their
special and private tree.

Not only that, there were several boxes under
the tree, and she’d love to know what they contained. Plus there were some very
interesting wrapped ones on the tree itself. As she wasn’t much interested in
sewing, she’d bet the one that looked like a darning mushroom was a butt plug.

If Sir hadn’t warned her about shaking them,
she’d have had enough practice to be proficient with maracas by now.

“Put it down and come and sit
next to me.” Stuart leered at her and stretched out his arm once more. Angie
took a step back. How on earth had she ever seen anything in him?

“Why do you wear such awful
clothes?” He glanced at her skirt disparagingly. “Show your legs and stop being
so fuddy-duddy.”

She gave up a prayer of thanks
that she was in a long, opaque skirt and baggy jumper. Now that she saw Stuart
again, she remembered one of his less pleasant traits—of which he had many—was
ogling.
As well as leering, and heavy breathing.
Not
to forget inappropriate comments.

The scent of pine teased her
nostrils and she inhaled deeply to let it fill her senses. She loved everything
to do with Christmas. Her lovely Sir had given her carte blanche to decorate
the house as she wanted, and each day she added something new. Today was to be
the start of decorating the big, anyone-can-see tree.

Stuart snorted. He sounded like
a demented hyena. No wonder they’d only lasted a few months together. Angie
ignored him and studied the tree carefully. Then she reached up to a branch
that she reckoned was perfect to place her decoration on.

“Sweetlips, you can’t. It’s old
and ugly.” He sat down on her sofa and crossed his legs. “Honestly, I thought
I’d taught you better.”

The assumption that he was
welcome, and had taught her anything, irritated Angie as much as his attitude.
All he’d shown her was how boring vanilla was without any extras to add some
spice.

You watch me, matey. You taught me F-all that was useful, except
how not to fall for an asshole again.
And for fuck’s sake?
Sweetlips?
What film has he been watching?

“Come out for a drink.” His
tone was sugar, saccharine and all-out wheedling. “Let bygones be bygones. I’ll
forget how silly you’ve been. Roddy and Serena were asking where you were.”

Now they were getting
somewhere.
His parents, who he always called by their first
names, had mentioned to Angie how pleased they were that their son had met her.
Calmed him down.
Steadied him.
A good influence on him.
Evidently her absence had been
noted and queried. Well tough, she’d moved on.
Months ago.

“Angie, did you hear me? Stop
this nonsense. I gave you a year to get over your snit. Grow up and accept I am
who I am, and what we’re going to be. We’ll go to the Caribbean and start a new
life together. I’m well established there now.
A man of
substance.”
He puffed out his pigeon chest as best he could. It was a
pitiful effort.

She knew fine what he was all
right, and she was having no more to do with him. At least now she understood
why he’d been conspicuous in his absence. As for her accompanying him to the
Caribbean? What planet was he from? Angie was so angry she wouldn’t have been
surprised to see smoke coming out of her ears. She dug her fingers into her
palms to stop herself from forming a fist and using it. Only the thought that
she was going to be in big trouble with Sir already, without adding
GBH
to it, stopped her.

Sir had already given her one
punishment for opening the door without the chain on. As he said, chains had
many uses. She’d discovered another one that night. Angie flexed her wrists as
she remembered just how the chain held her whilst said punishment had been
administered. The fact the punishment was earned, and the
make
up
sex was more than interesting, still didn’t stop her from wanting to
rub her ass. Her Sir was very inventive.

If sodding Stuart hadn’t been
around she’d have gone into their room, turned on the video, and sent Sir a
video of herself and her bullet. Sir was very good at orgasm denial unless… She
dragged her pantie-dampening thoughts back to the here and now and the knotty
problem of how to get shot of Stuart.

“Stuart, I know exactly who you
are, and what we’re going to be. Watch my lips. You’re in the past. Well in the
past. I’m not going anywhere. It’s over. We are finished. Done, dead and
buried. You know your way out.” She turned her back on him, determined to
ignore hi
m
.

His hiss of breath showed how
annoyed he was. Okay, she should maybe try for a less aggressive approach, but
his hide was so thick you needed heavy-hitting words to pierce it. She might be
all-out submissive to her Sir, but never to Stuart. In their short-lived
relationship, Angie had just about gone giddy trying to be all things at all
times, especially doing her best not to show she was topping from the bottom.

“It’s over and you know it,
Stuart. Now, I’m busy.”
Should
she
mention the new and very important man in her life? She decided to keep him as
the surprise tough measure. Instead she smoothed the hair on the small wooden
angel she held to try and stop her hands from shaking. The wool was warm
between her fingers and she held on to it like a lifeline. Angie hated
confrontation of any sort, and this was not at all pleasant. She hoped she
wouldn’t be by herself with Stuart much longer.

“Put that sodding ornament down
and look at me.”

Angie ignored him and prinked
out the skirt on the old angel she was going to put on the tree. The glass
beads around the bottom could do with a clean before Angel Dora graced the
tree. Okay, Angel Dora had seen better days, and one of her wings was
definitely skewed, but she was part of the family and was said to even be older
than Angie’s gran. She was a family heirloom, tatty and battered or not.

“I said put it down.” Stuart’s
tone was sharp. He leaned forward, grasped her arm, spun her round, and tried
to pull the angel out of her hand. Angie held on for grim death.

“I ignored you.
My house, my tree, my angel, my choice.”
How dare he become
the tyrant? “Time you left, Stuart.”