Read A Donkey in the Meadow Online

A Donkey in the Meadow 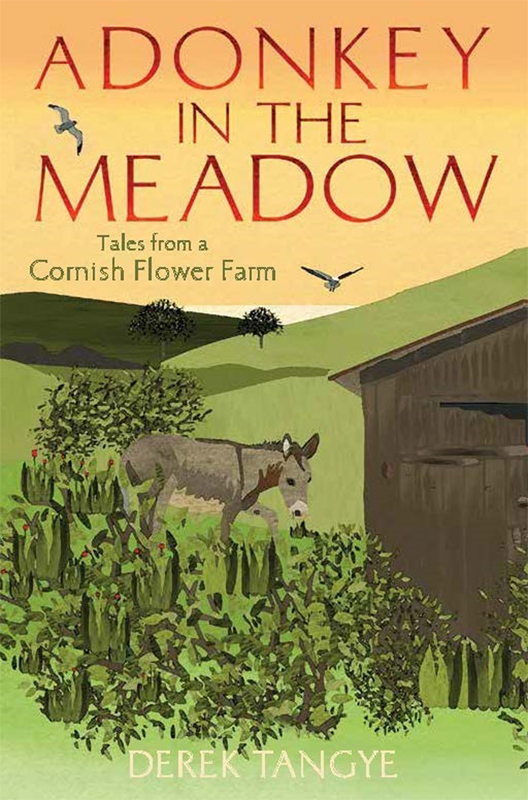 Derek Tangye
(1912–1996) was the author of the much-loved books that collectively became known as The Minack Chronicles. They told the story of how he and his wife Jean left behind their cosmopolitan lifestyle in London to relocate to a clifftop daffodil farm in Cornwall. There they lived in a simple cottage surrounded by their beloved animals, which featured regularly in his books. In their later years, the Tangyes bought the fields next to their cottage, which are now preserved as the Minack Chronicles Nature Reserve.

A Donkey in the Meadow 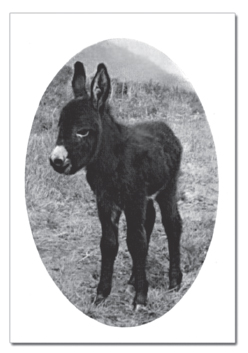 First published in the UK by Michael Joseph Ltd., 1965

This edition published by Constable, an imprint of Constable & Robinson Ltd., 2014

The right of Derek Tangye to be identified as the author of this work has been asserted by him in accordance with the Copyright, Designs and Patents Act 1988

A month later Fred is born

Fred outside the stable

Then his first gallop

Fred looks out to sea where the
Juan Ferrer
was wrecked

Helicopters hover above the wreck

Fred and Penny look at Peter the gull

Fred rolls in the snow

Fred with Susan and Janet

His guests vie with each other 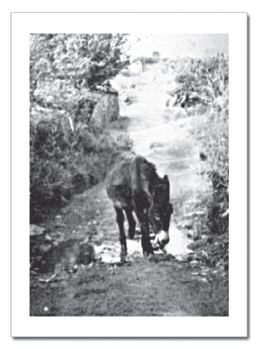 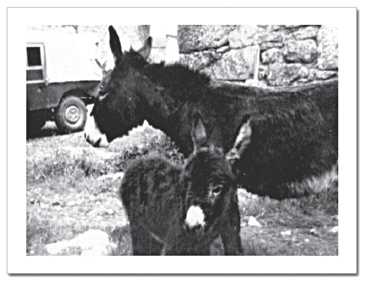 A month later Fred is born

It was a sunny April morning, and we were sitting on the white seat beside the bare verbena bush eating our breakfast; a liner aslant from the Lizard on the horizon, Lama, the little black cat at our feet, and Boris, the muscovy drake, staring at us a few yards up the path.

‘Have you really made up your mind?’

I knew what Jeannie was thinking. We had discussed holidays before. We had perused the map, had our passports renewed, thought about Brittany, decided on Paris, then changed our minds to London, and in the end had gone nowhere.

A holiday sometimes begins as a course of duty. There are people, for instance, who have to be exploded out of their homes in order to escape to the enjoyment of a holiday. I am one of them.

‘The point is,’ Jeannie had said to me earlier. ‘you haven’t been away from Minack for eight years.’

‘You’ve worked very hard all these years on the flower farm.’

‘You’ve also written two books that in successive years were high up in the
Sunday Times
bestseller list.’

‘You’ve also sold one for a Walt Disney film.’

‘What’s all this leading up to?’

‘It’s time you saw one of your books in a London bookshop.’

‘You’re appealing to my vanity.’

‘Seriously . . . I’m suggesting you see in their own surroundings the people you work with.’

‘If you like to put it that way. You would be able to wake up in the morning without having to worry about gales or what’s made the tractor break down or what disease has hit the freesias . . . and concentrate on your other career.’

‘And find out which is the more satisfying?’

‘You can’t deny,’ said Jeannie, flinging a bacon rind at Boris, ‘that things have been changing. I mean pressures have been put on us that remind us of the reasons why we left London to come to Minack.’

‘The grit in the oyster.’

‘And because of these pressures you haven’t been able to put your mind to the flower farm as you used to do.’

‘The old story of being unable to serve two masters.’

‘Sooner or later we’ll have to reconcile the two, and by going to London it might help. Afterwards we might see things in better perspective.’

‘I doubt it,’ I said. ‘We’ll have a gay time in London, a time of forgetting, that’s all. When we get back we’ll have to face facts. We’ll have to make a choice. We’ll have to decide whether to keep on the flower farm. And the only way to solve that problem is here at Minack.’

‘You don’t have to explain,’ Jeannie said, and Lama was gently rubbing against her leg. ‘I know you’re right. We can’t go on as we are. But in the meantime it would do you good to have a holiday.’

‘You too. Especially now after the flower season.’

Minack is a lonely spot with the nearest farm a half-mile inland. The cottage sits snug by a wood, an old granite cottage with a massive chimney which in olden days was a beacon to sailing ships making their way across Mount’s Bay to Newlyn. It has one large room, a small bedroom, and a spare room and bathroom. The site is carved out of a hillside and it faces, after a few hundred yards of moorland, the expanse of the bay. There is no other building except our old barn in sight, no road, no pylons, nothing to offend the view. The eyes peel across the gorse and the bracken, old hedges and boulders, to the sea and the distant shapes of houses far away on the Lizard peninsula.

Our fields slope down to the cliff, a hundred feet above the sea, then are replaced by a series of small meadows tumbling in odd shapes down to the rocks. Here grew our earliest daffodils, blooming so early in the year that they rivalled the pampered, heated daffodils that come from the vast glasshouses of Spalding. We had several tons of daffodils in our fourteen acres. We also had four large mobile greenhouses covering two sites, a small and a large static greenhouse in front of the cottage, and all of them were heated by oilburning heaters each with an electric fan. The fans drove the hot air through polythene ducting.

Had we foreseen, when we first came to Minack, such equipment and opportunity we would have been goggle-eyed with excitement. We possessed then only our hands, enthusiasm and ignorance to drive us forward in the pursuit of making a living. We had no capital. There was no route for a car to reach the cottage. There was no water except the rain from the roof, and thus no bath. Our light came from paraffin lamps and candles and, as now, we had no telephone. But we had in our hearts the exquisitely sweet relief of being freed from twentieth-century entanglements. The deceptive gloss, the gritty worship of false values, the dependence on the decisions of tin gods, all these we had escaped from; and we had the years ahead of us in which to dwell with the primitive and to discover whether within ourselves we could earn contentment.

One discovers in these circumstances that one’s own shadow remains the enemy. During the honeymoon of the first years a magical impulse drives you forward, seducing you into believing that each setback is a jest and each complication a momentary bad dream which has no reality in the life you are leading. It is easy to believe, at this time, that you have devised for yourself a way of life that for ever will be protected from the tendrils of computer civilisation. You delude yourself into believing that you have the same freedom as an aborigine of the South American jungle. Cut off from the do-gooders and the progress-makers you feel able to find your own level of happiness. Unharnessed by man-created shibboleths and conventions you feel you at last have the opportunity to release the forces of your secret self.

The balloon of these inspirations remains inflated until the setbacks and the complications begin monotonously to repeat themselves; and then it gradually dawns on you that the period of illusion is over, that it ended as abruptly as a school holiday without the merit of your knowing it, and that considerable determination will have to be exercised to stop yourself drifting.

Of course, it is pleasant to drift, as it is to lie in bed in the morning half awake. I was once a beachcomber on the island of Toopua two hundred miles south of Tahiti where my only neighbours were a Tahitian family; and I was contentedly able to develop a beachcomber mind because I knew my indulgence could not possibly last for long. I had a boat to catch and I had to come home.

There was, however, no timetable to govern our lives at Minack. Time was our own. We could lie in bed all morning if we wished, or treat hot summer days like holidaymakers, or start a job of work, get bored, and give up. We had a roof over our heads in a setting we loved, and so long as we had enough to pay for our food we could wander along in indefinite idleness. A perpetual holiday, in fact, leading nowhere. The convential conception of the escapist.