Read A Dream to Cling To Online

A Dream to Cling To 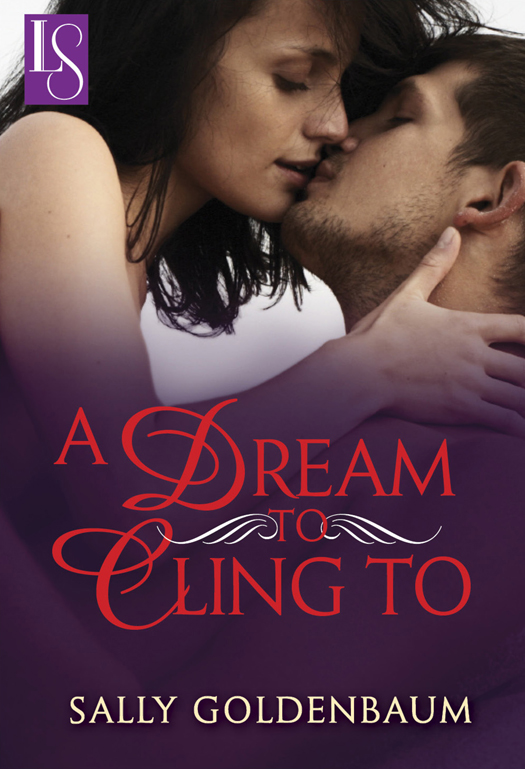 In an unforgettable tale of unlikely passion, cherished romance author Sally Goldenbaum shows that in the game of love, rules are meant to be broken.
Sam Lawrence is a wild Renaissance man who chases his dreams around the world in pursuit of lucrative business ventures. But after meeting the captivating Brittany Winters, he is determined to keep her in his arms forever. If only he can persuade the auburn-haired beauty that he's a serious catch and not a fleeting mirage.
Brittany has always followed the rules. Close with family and friends, dedicated to her job at an animal shelter, Brittany is firmly planted in a satisfying life - that is, until Sam comes along. Sam's touch makes her head spin, but can a man on the move ever have a real home? Longing to hold on to her own dream of happily ever after, Brittany must decide whether she can trust Sam - or risk a broken heart.

A Dream To Cling To
is a work of fiction. Names, places, and incidents either are products of the author’s imagination or are used fictitiously.

A Dream To Cling To
was originally published in paperback by Loveswept, an imprint of The Random House Publishing Group, a division of Random House, Inc. in 1997.

Excerpt from Linda Cajio’s
Silk on the Skin

Sam Lawrence pulled his lanky frame out of the Queen Anne chair and walked over to the fireplace. The leaping flames felt good against his legs and eased his cramped joints, stiff from sitting too long in the Winters’ ornately carved chairs. He thought of the neglected stack of work piled up in his office and the pressured rush of getting the Winters job done on time. Things would be tight for a while. He stared down at the scuffed toes of his boots. There’d be no time to get away and really loosen the joints, free the mind. Sam wasn’t accustomed to the cramped feeling that was heavy on his spirit. Oh, well, there’d always be later. Slowly he raised his head and smiled.

“Well,” he said, his gaze moving from one member of the family to another, “what do you say we call it a night? We’ll need to get together a few times to gather those anecdotes and stories that’ll give the game its life. And in addition to interviewing family and friends, I’ll need one of you to work closely with me to make sure I’m on the right track as we move along.” Even when he was at his most serious, like now, Sam’s deep voice held a hint of laughter. He smiled encouragingly. “The information will come.
Sometimes it takes a little time to prime the pump, you know.”

“Oh, but don’t worry, Mrs. Winters, it’ll come. It always does.” He flashed the older woman an engaging grin, then shoved his hands deep into the pockets of his corduroy pants and leaned back against the carved mahogany mantel. Sure it did, he thought. Anyone who had risen to the business heights of a Gordon Winters had color in his life … didn’t he? Sam rubbed the rough stubble of a beard that seemed to have appeared since his arrival at the lavish, lovely Winters home well over an hour ago.

“Surely,
surely
Brittany Ellsbeth will be here soon,” Mrs. Winters said. She lifted her thin brows hopefully and gazed around at the others, seeking assurance that this was in fact the case.

Sam noticed that no one seemed willing to chance confirmation of the eldest Winters child’s arrival.

“Brittany always has plenty of stories to tell,” Mrs. Winters added brightly. “You see, she’s a lot like her father. Shell understand what you need in order to make the game about Gordon. You’ll see, Mr. Lawrence. Just as soon as she gets here …”

“If she doesn’t make it, Mother, she’ll make it next time.” Sara Winters Hancock smiled comfortingly at her mother. “You know Brittany. She tends to get involved in things and sometimes forgets.”

Mrs. Winters sat still, her thin, frail hands knotted together in her lap as she returned her newly married daughter’s smile. “Yes … yes, Sara, she does, doesn’t she?” She looked over at Sam. “It’s all those animals, you see.… Perhaps if we give her just a few more minutes.”

“Well.” He shifted his weight from one leg to the other and glanced down at his empty notepad. He rotated one shoulder beneath his heavy sweater and tried
to ease away the tiredness. Then he grinned at Katherine Winters and shrugged. “Well, okay, sure, Mrs. Winters. If you’re not too tired, we’ll give it a little longer. Maybe we can get some more thoughts down while we wait.”

“Yes, I’m sure we can!” Mrs. Winters assured him, and Sam could see how relieved she was that he was willing to wait for the errant daughter, now nearly an hour late. Sam usually wasn’t big on punching time clocks himself. Except at night, when he had trouble keeping his eyes open much after nine. Like now. He stifled a yawn behind one hand and stretched out his legs. Then he settled back to business.

His thick brows drew into a line above his eyes as he looked from Sara to her husband, Michael, who was the perfect solicitous bridegroom, never moving far from Sara’s side. Their hands kept finding each other across the sofa pillows and Sam knew they were just as eager as he to get home. Probably more so, he decided with a lopsided smile. They were a nice bunch, these Winters folks. He hadn’t known quite what to expect when the game job for Gordon Winters had come his way. Most of the games he’d done about people had been on a much smaller scale. Hell, half had been favors to friends and he’d never charged for them! But this one could be important.

He’d tried to learn a little about the family from the society pages, but after a quick look he’d trashed the papers and the idea. Not fair. No one was as flat as a columnist’s type. And he was right. These were good people, not flat at all. Now, if only he could figure out how to shake up their imaginations …

“Sure. Shoot, Sam.” Gordon Junior stretched his arms above his head. “Throw some more questions our way. We’ll come up with something.” He grinned encouragingly.

Sam nodded a thanks and looked down at his pad as
he rubbed the kinks out of the back of his neck. “Let’s go back to hobbies.”

He glanced around the room and drew his audience into his deepening gaze as the tiredness was suspended and the showman in Sam took over. “Hobbies are a great source of stories—they tell a lot about a man! Now, think everyone, what does Mr. Winters do in his spare time?”

Sam dove desperately onto the last comment and spoke in exclamations to keep the spark alive. “Fish! All right, folks, now we’re cookin’! Fish stories are great! And every fisherman has some of those wild tales that curl your hair and raise your eyebrows.” He pushed a handful of thick sandy hair off his forehead and smiled with anticipation.

Sara crossed her legs with great care and looked over at her brother. “Gordie, I think you know more about this area than I. I’ve never … well, I never much liked fishing.…”

Gordie twined his fingers together beneath his chin in deep thought. “Sure, sure. Well, let’s see. It rained one year, I think, and he came back early.” He looked over at his mother.

Katherine Winters sighed, her tiny brows pulling together and wrinkling the still-beautiful pale skin of her forehead. She raised her head to look at Sam. “He … he fishes with Brittany.”

The hope fizzled out of Sam. “Oh.” He should have known. Sure, he fished with Brittany, like he
rode
with Brittany, and explored old maritime museums with Brittany. And that was, unfortunately, the sum total of what Sam Lawrence knew thus far about the Winters scion. How the hell was he supposed to design a board game around the life of a man whose family’s
most exciting memory was that he didn’t fish in the rain?

Sam looked around the room for the twentieth time that night and swallowed the rest of his drink in a single gulp. Raking one hand through his hair, he straightened his stance before the fire. “Well, folks, where the Sam Hill is Brittany?”

Katherine Winters looked up so suddenly at the unexpected words that her sherry sloshed over the edge of the fine Waterford crystal and darkened her silk dress. “Oh, dear,” she murmured.

Sam smiled apologetically. “Sorry, everyone. It’s been a long day.”

“Don’t worry about it, Mr. Lawrence,” Sara said. “The problem is that Brittany sometimes gets deterred, you see, waylaid by some other pressing concern. But she always shows up, sooner or la—”

A gust of wind and the slamming of the huge door in the front hallway halted Sara’s prophetic words midstream.

Brittany Ellsbeth Winters swept into the room, her cheeks pinked from the cold, her green eyes sparkling brightly. “Hi, everyone. I’m terribly sorry to be late!” She dropped her bag by the door, then bent over and hugged her mother warmly.

“Brittany dear, I was beginning to worry about you.”

Brittany brushed the back of one hand along her mother’s pale cheek and scolded her affectionately. “You know better than to worry about me, Mother! I know your message said ‘urgent,’ but things never seem to go according to schedule these days. It was Jerry Fitzgerald’s eighty-fifth birthday—can you believe that?—and he’s as sharp as you or I. He wanted me to bring some of the animals out to the Elms Senior Citizens Home for the birthday party, so—”

Brittany’s words halted abruptly as she lifted her head to smile at the rest of the family. Instead, her glance fell soundly into the amused gaze of a tall, lanky
stranger, his arm draped casually on the mantel. His lazy smile seemed to warm the air between them.

Desires by Gill, Holly J., Blaise, Nikki
The Machine's Child by Kage Baker
The Fortunes of Indigo Skye by Deb Caletti
How to Punish Your Playboy (DommeNation #3) by Mina Vaughn
Getting Played (Heart of Fame #7) by Lexxie Couper
Spartans at the Gates by Noble Smith
The Cabin by Carla Neggers
Two Pints by Roddy Doyle
CURSED - CHOSEN FEW MC ROMANCE: BOOK ONE by Connor, Nessa
Angel Gone Bad by Sabine Starr
Our partner