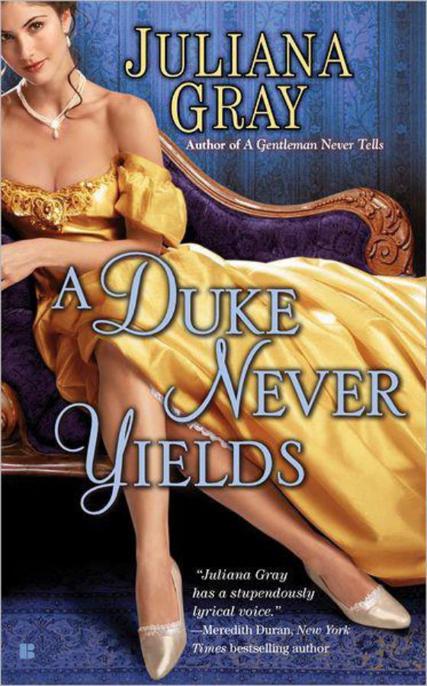 “Shakespeare meets
Enchanted April
in this dazzling debut. Pour yourself some limoncello, turn off the phone, and treat yourself to the best new book of the year!”

“Extraordinary! In turns charming, passionate, and thrilling—and sometimes all three at once—
A Lady Never Lies
sets a new mark for historical romance. Juliana Gray is on my auto-buy list.”

“Juliana Gray writes a delightful confection of prose and desire that leaps off the page. This romance will stay with you long after you have turned the final page.”

“Charming, original characters, a large dose of humor, and a plot that’s fantastic fun make
A Lady Never Lies
a fabulous read. Prepare to be captivated by Finn and Alexandra!”

“Juliana Gray has a stupendously lyrical voice, unlike anybody else’s I’ve read—really just a gorgeous way with language. Some of the imagery made my breath catch from delighted surprise, as did the small, deft touches of characterization that brought these characters so vividly to life. The story feels tremendously sophisticated, but also fresh, deliciously witty, and devastatingly romantic.”

Berkley Sensation Books are published by The Berkley Publishing Group,

As always, to the faithful ladies of the Romance Book Club, and especially to our dear and witty Abigail, who gets the duke.

I’d like to think that Shakespeare, that great purloiner of history and legend, would not have minded my adaptation of
Love’s Labour’s Lost
into a romantic trilogy set in Victorian-era Italy. I’ve tried in
A Duke Never Yields
(as in the previous installments,
A Lady Never Lies
and
A Gentleman Never Tell
s) to honor my source with plenty of the servants’ banter, mistaken identity, and magical realism he employed to such classic effect.

But I owe another debt to Giuseppe Verdi, who composed many of his greatest operas at the same time and in roughly the same corner of the world as the setting of this trilogy, and all three books are littered with references, large and small, to his life and work. My most blatant larceny, of course, is of the Curse of the Castel sant’Agata itself (named, by the way, for Verdi’s estate in nearby Lombardy). Opera lovers will recognize at once that the over-the-top events taking place in the castle’s courtyard in 1590 mirror those in the first scene of
La Forza del Destino
(itself an adaptation of earlier dramas by Schiller and Angel de Saavedra); my Leonora’s flight to a religious sanctuary is based on that of Verdi’s Leonora. The Convento di San Giusto is named for the convent in
Don Carlo,
which opera also inspired some of the dynamics of the love triangle in
A Gentleman Never Tells,
including one of its key scenes.

Both Shakespeare and Verdi loved the otherworldly, and their works seethe with ghostly spirits, with undercurrents of fate and destiny, with the redemption of sin as the beating heart of human drama. I’ve used these devices liberally in this trilogy, and I hope the masters would approve.

One final word of heartfelt thanks to cast and crew: my matchless agent, Alexandra Machinist; my keen-eyed editor, Kate Seaver, and her lovely assistant, Katherine Pelz; the wonderful people at Berkley who make magic with book covers, marketing, publicity, and sales; and most especially to my copy editor, Marianne Grace, who kept all the details straight in this complex three-book project, and who deserves a year-long Tuscan holiday of her own, dashing aristocrats included.

T
he Duke of Wallingford, as a rule, did not enjoy the sound of the human voice upon waking. Not that of his valet, nor his mistress—he never, ever spent the night with a woman—and certainly not the one that assailed his ears just now.

“Well, well,” said the Duke of Olympia, to the prostrate form of his eldest grandson. “For an instrument that has cut such a wide swathe of consternation, it appears remarkably harmless at present.”

Wallingford did not trouble to open his eyes. For one thing, he had a crashing headache, and the morning light already pierced his brain with sufficient strength, without his giving up the additional protection of his eyelids.

For another thing, he’d be damned if he gave the old man the satisfaction.

“Who the devil let you in?” Wallingford demanded instead.

“Your valet was kind enough to perform the office.”

“I shall sack him at once.”

Olympia’s footsteps clattered in reply along the wooden floor to the opposite end of the room, where he flung back the curtains on the last remaining window. “There we are! A lovely day. Do examine the brilliant white of the winter sun this morning, Wallingford. Too extraordinary to be missed.”

Wallingford dropped an arm over his face. “Rot in hell, Grandfather.”

A sigh. “My dear boy, may I trouble you to consider a dressing robe? I am not accustomed to addressing the unadorned male member at such an early hour of the day. Or any hour of the day, as a matter of habit.”

Arthur Penhallow, Duke of Wallingford, twenty-nine years old and assuredly not a boy, flung his unoccupied arm in the direction of his dressing-room door. “If the sight offends, Grandfather, I recommend you to the wardrobe. The dressing gowns, I believe, are hanging along the right-hand side. I prefer the India cashmere, in wintertime.”

“I must decline your gracious invitation,” said Olympia, “and ring for your valet instead. Have you never considered a nightshirt?”

On the other hand, the opportunity was too tempting to pass up.

“And yet, Wallingford, your own person exhibits no evidence of feminine attention of any kind.” A delicate pause. “Quite the contrary, in fact.”

“What a crude generation my children have spawned. Ah! Shelmerstone. You perceive His Grace stands in need of a dressing gown. In a manner of speaking, I hasten to add.”

Wallingford heard the door close behind his valet, heard the soft tread of the man’s feet across the thick Oriental rug toward the dressing room. “Shelmerstone,” he said, “once you have dressed and shaved me, you may collect your things and vacate your position. I am not to be disturbed before nine in the morning, and certainly not by so intolerable a character as His Grace, my grandfather.”

“Yes, sir,” said Shelmerstone, who was accustomed to being sacked several times a day, as a matter of course. “I have taken the liberty of putting out the gray superfine, sir, and your best beaver hat.”

“Why the devil? I ain’t contemplating church this morning.”

“I chose it, sir, as being more suitable for calling upon a lady, on a matter of such unprecedented delicacy.”

This caused Wallingford to sit up at last. “What lady?” he demanded, shading his eyes against the merciless abundance of light. Was it his imagination, or did everything smell of stale champagne this morning? “What . . .
delicacy
?” He said the word with a shudder of distaste.

“Madame de la Fontaine, of course.” Shelmerstone emerged from the wardrobe’s depths with a dressing gown of fawn brown cashmere and an air of irresistible moral authority, laced with cedar.

“See here.” Wallingford rose from his bed by the sheer force of habit and allowed Shelmerstone to fit his arms into the robe.

The Billionaire's Weekend Bride by Love, Kimmy
Systematic Seduction by Ravenna Tate
The Lady Astronaut of Mars by Mary Robinette Kowal
The One That I Want by Allison Winn Scotch
The Paladin's Tale by Jonathan Moeller
The Darkest Corners by Barry Hutchison
The Destiny (Blood and Destiny Book 4) by E.C. Jarvis
The Paris Secret by Angela Henry
Written on Your Skin by Meredith Duran
The Song Before It Is Sung by Justin Cartwright
Our partner