A Family Kind of Gal 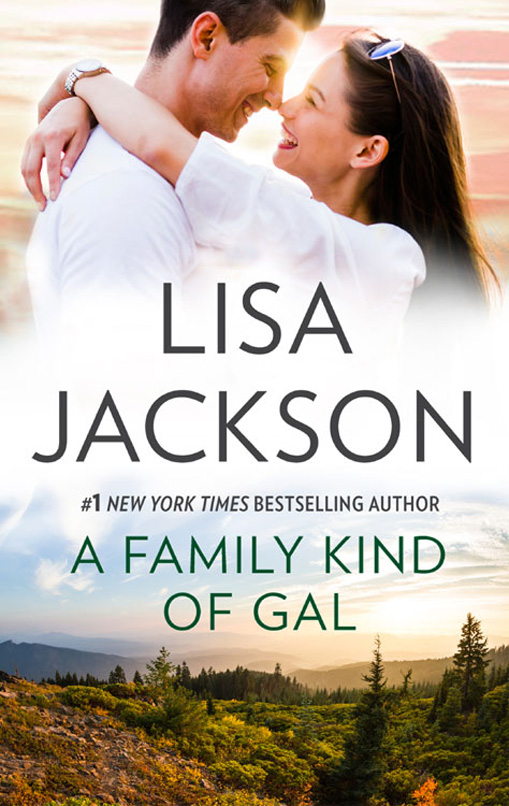 Tiffany Santini has no need for a man. Least of all her stubborn, powerful brother-in-law, JD, who suddenly shows up on her doorstep declaring that the single mother, recently widowed after a tragic car accident, needn't raise her kids all alone.

Feisty, independent Tiffany can't believe the disturbingly attractive lawyer thinks he has a right to invite himself into her home and into her life. Well, she has plans to send JD packing. Tiffany thought she did, anyway. Until he showers her heartbroken kids with the fatherly attention they'd missedâand favors her with seductive kisses that wreak havoc with her heart...

“You can't just forget the past.”

Suddenly Tiffany's throat constricted and she wanted to call back the words, but it was too late.

“It would be better if we could sometimes,” J.D. said, and she knew in a heartbeat that he, too, was fighting unwanted memories, forbidden, painful recollections of something that, if acknowledged, would only cause more hurt. “It's a tough load. Teenage boy, little girl, part-time job and running this place.”

“Not a problem, J.D. Well, at least not yours.” Tiffany forced a confident smile. No reason for him, or any of the Santini family, for that matter, to know of her troubles.

“It looks like you could use a man around here.”

A Twist of Fate

The Millionaire and the Cowgirl

A FAMILY KIND OF GAL

You are the best. 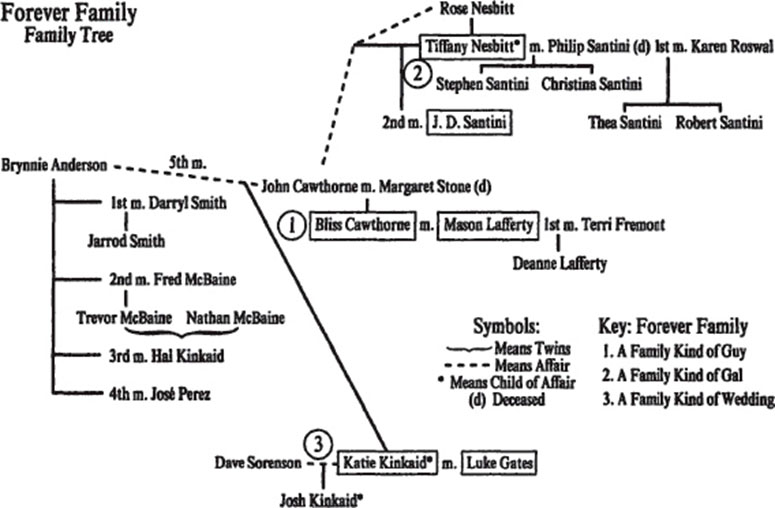 S
o this was the place.

With a jaundiced eye, J.D. Santini studied the immense house with its apron of drying lawn and Apartment for Rent sign posted near the street where he'd parked. Gray clapboard accented with bay windows, black trim and a smattering of white gingerbread, this was where Tiffany had run.

His gut twisted, and he told himself that he wasn't throwing her out of her home. Not really. And certainly not right away. What he was doing was for her own good. In her kids' best interests.

Pocketing his keys, he climbed out of his Jeep. The dry heat of southern Oregon in mid-July hit him square in the face.

Bittersweet.
A fitting name for the town, he thought; as good a destination as any if a person wanted to turn tail and run. Which is what she'd done.

His jaw tightened when he thought of her. Tiffany Nesbitt Santini. Sister-in-law. Gold digger.
Lover.

Damn, he hated this.

Get over it, Santini. What did you expect when you took the job with the old man? You dove headfirst into this mess, and your eyes were wide open.

He reached into the back seat of his Jeep Cherokee for his beat-up duffel bag and briefcase.

It was now or never.

His leg still pained him when he walked, but he hitched the strap of his bag over his shoulder and made his way up a brick walk that needed more than its share of new mortar.

He tried not to notice the crumbling caulking around the windows and the trickle of rust that colored the downspouts as he climbed the two steps to the front door.

This house and its sad need of repair are not your problem.

Right, and the Pope wasn't Catholic.

Everything Tiffany did affected him. Whether he wanted it to or not. She was the widow of his brother, mother of his niece and nephew, and the only woman whom he'd never been able to forget.

And trouble. Don't forget the kind of trouble she is.

He jabbed on the bell, heard the chimes peel softly from the interior and waited impatiently. What could he say to her? That, unbeknown to her, he owned part of this old house, because her dead husband, his older brother, had been an inveterate gambler? That he thought it would be better if she sold the place, bought something newer and more modern, that it would be best if the kids wereâ¦what? Moved again? Uprooted to live close to the Santini enclave? He snorted at that thought. For years he'd avoided being roped into the tight-knit-to-the-point-of-strangulation clan, but then he was a man. It was different for him, wasn't it? He didn't have kids.

A black cat darted through the shadows of overgrown rhododendrons and azaleas. Footsteps dragged through the house, and the door was opened just a crack.

“Yeah?” Suspicious thirteen-year-old eyes peered out at him through the slit.

The eyes narrowed. “Who're you?”

J.D. felt a shaft of guilt. The kid didn't even recognize him. That wasn't Stephen's fault so much as it was his. “I'm your uncle.”

“Oh.” Stephen's voice cracked, and his skin, olive in tone, was instantly suffused with color. A flicker of recognition flashed in his eyes. He opened the door farther, standing aside as J.D. hitched his way into the foyer.

“What happened to your leg?”

“An accident. Motorcycle. The bike won.”

“Yeah?” Stephen's eyes gleamed, and the hint of a smile slid over his lips. He would be a good-looking kid in a few years, but right now he was a little rough around the edges. Soon his jaw would become more defined, and his face would catch up with his nose. The boy reminded J.D. of himself and his own misdirected youth. “You've got a motorcycle?” Stephen asked, obviously awed.

He couldn't have impressed the kid more if he'd claimed to be a millionaire. “It doesn't look so cool now. Funny what plowing into a tree does to a bike.”

Stephen managed the ghost of a smile. J.D. noted that Stephen's black hair was shaggy, his brown eyes filled with distrust, and his muscles so tense that J.D. half expected him to make a run for it at any moment.

“Is your mother here?”

The kid's gaze fell to the floor, and he seemed to be studying the intricate floral patterns of a throw rug at the foot of the stairs. “She's...she's not around right now.”

“She's in jail!” a little voice chirped from the landing. A pixieish face, pink-cheeked and surrounded with black curls, was stuck through two balusters.

“Do, too!” the imp retorted indignantly.

Stephen worried his lip for a second, then shrugged, as if he didn't care one way or the other. “Okay. Mom's down at the police station.”

“Dunno,” he mumbled, obviously lying. “I just got stuck babysitting.”

“I'm
not
a baby!” Christina dashed down the stairs on her chubby legs. The blue-black curls bounced, and her eyes were wide with wonder.

“You're here alone?” he asked.

“Ellie's downstairs.” Christina dashed across the hall and through a swinging door leading into the kitchen.

“Mrs. Ellingsworth.” Stephen shifted uncomfortably from one foot to the other. “She lives in one of the apartments downstairs, and when Mom has to work, Ellie looks after Chrissie.”

This was getting him nowhere fast. J.D. set his bag and briefcase on to the floor. “Soâ¦when will your mom be back?” Something was upâsomething the kid didn't want him to know about.

“Dunno. Soon, I guess.” Stephen was prickly but must have heard the rudeness in his voice, because he added, “You can, uh, wait for her here or in the parlor, if ya want...orâ”

Christina barreled out of the kitchen and ran to one of the narrow, beveled-glass windows flanking the front door. “Mommy!” she cried with delight. She threw open the door and raced down the steps.

J.D. turned and saw Tiffany climbing out of a sedan she'd parked in the shaded driveway.

Tall and slim, with shoulder-length black hair that framed an oval face, she was more than attractive; she was downright gorgeous, the kind of woman who expected and received more than her share of male attention.

“A male magnet,” his mother used to say.

Folding some papers into an oversize bag, she looked up, saw Christina flying across the yard and offered her daughter a smile that froze as her gaze landed directly on J.D. Her eyes, a gold color J.D. had always found disturbing, hardened, and the skin stretched taut over her high cheekbones was suddenly suffused with color. “Hi, honey!” she said to her daughter as she scooped the three-year-old up from the ground.

“I see.” She seemed to steel herself in her sleeveless white blouse, still crisply pressed and stark against her tanned skin. She walked toward the front door, and the slit in her khaki-colored skirt moved enough to show off her long, well-muscled legs.

Yep. There was a reason his divorced brother had fallen so hard and fast for Tiffany Nesbitt. The same reason that had nearly done J.D. in. Nearly.

“So I see.” She lifted a finely arched brow. White lines of irritation bracketed her lips. “Jay.”

“Looks like your timing is impeccable as always,” she said with more than a trace of sarcasm.

Still carrying her daughter, she walked into the house and shut the door. “A misunderstanding.”