Read A Fire in the Sun Online

A Fire in the Sun 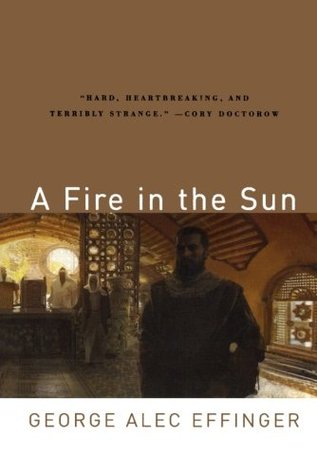 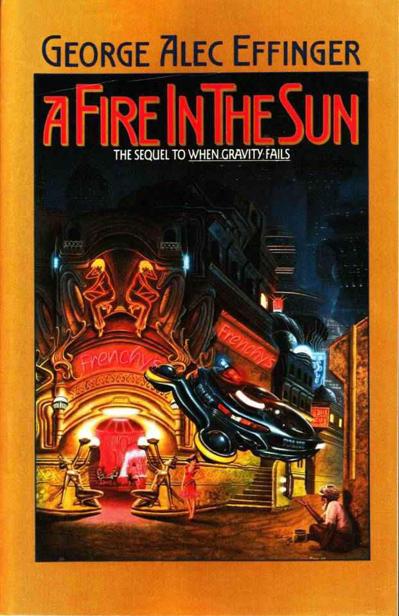 A Fire In The Sun

A FIRE IN THE SUN

A Bantam Spectra Book I April 1990

spectra and the portrayal of a boxed "s" are trademarks of Bantam Books, a division of Bantam Doubleday Dell Publishing Group, Inc.

No part of this book may be reproduced or transmitted in any form or by any means,

electronic or mechanical, including photocopying, recording, or by any information

storage and retrieval system, without permission in writing from the publisher.

My grandfather, George Conrad Effinger, whom I never knew, was a police officer in the city of Cleveland during the Depression. He was killed in the line of duty. This book is dedicated to his memory, growing fainter now each year in the minds of those people who did know him, except for his policeman's shield, Badge #374, hung with pride in a station house in Cleveland.

Children begin by loving their parents; after a time they judge them; rarely, if ever, do they forgive them.

property. It was reported as "unsold and destroyed" to the publisher and neither the

author nor the publisher has received any payment for this "stripped book."

Bantam Books are published by Bantam Books, a division of Bantam Doubleday Dell Publishing Group, Inc. Its trademark, consisting of the words "Bantam Books" and the portrayal of a rooster, is Registered in U.S. Patent and Trademark Office and in other countries. Marco Registrada. Bantam Books, 666 Fifth Avenue, New York, New York 10103.

upgraded to v4 by ebookman

We'd ridden for many days out the coast highway toward Mauretania, the part of Algeria where I'd been born. In that time, even at its lethargic pace, the broken-down old bus had carried us from the city to some town forsaken by Allah before it even learned what its name was. Centuries come, centuries go: In the Arab world they arrive and depart loaded on the roofs of shuddering, rattling buses that are more trouble to keep in service than the long parades of camels used to be. I remembered what those bus rides were like from when I was a kid, sitting or standing in the aisle with fifty other boys and men and maybe another two dozen clinging up on the roof. The buses passed by my home then. I saw turbaned heads, heads wearing fezzes or knit caps, heads in white or checked keffiyas. All men. That was something I planned to ask my father about, if I ever met him. "O my father," I would say, "tell me why everyone on the bus is a man. Where are their women?"

And I always imagined that my father—I pictured him tall and lean with a fierce dark beard, a hawk or an eagle of a man; he was, in my vision, Arab, although I had my mother's word that he had been a Frenchman—I saw my father gazing thoughtfully into the bright sunlight, framing a careful reply to his young son. "O Marîd, my sweet one," he would say—and his voice would be deep and husky, issuing from the back of his throat as if he never used his lips to speak, although my mother said he wasn't like that at all—" Marîd, the women will come later. The men will send for them later."

"Ah," I would say. My father could pierce all riddles. I could not pose a question that he did not have a proper answer for. He was wiser than our village shaykh more knowledgeable than the man whose face filled the posters pasted on the wall we were pissing on. "Father," I would ask him, "why are we pissing on this man's face?"

"Because it is idolatrous to put his face on such a poster, and it is fit only for a filthy alley like this, and therefore the Prophet, may the blessing of Allah be on him and peace, tells us that what we are doing to these images is just and right."

"And Father?" I would always have one more question, and he'd always be blissfully patient. He would smile down at me, put one hand fondly behind my head. "Father? I have always wanted to ask you, what do you do when you are pissing and your bladder is so full it feels like it will explode before you can relieve it and while you are pissing, just then, the muezzin—"

Saied hit me hard in the left temple with the palm of his hand. "You sleeping out here?"

I looked up at him. There was glare everywhere. I couldn't remember where the hell we were. "Where the hell are we?" I asked him.

He snorted. "You're the one from the Maghreb, the great, wild west. You tell me."

"Have we got to Algeria yet?" I didn't think so.

"No, stupid. I've been sitting in that goddamn little coffeehouse for three hours charming the warts off this fat fool. His name is Hisham."

"Just crossed through Carthage. We're on the outskirts of Old Tunis now. So listen to me. What's the old guy's name?"

He hit me hard in the right temple with the palm of his other hand. I hadn't slept in two nights. I was a little confused. Anyway, he got the easy part of the job: Sitting around the bus stops, drinking mint tea with the local ringleaders and gossiping about the marauding Christians and the marauding Jews and the marauding heathen niggers and just in general being goddamn smooth; and I got the piss-soaked alleys and the flies. I couldn't remember why we divided this business up like that. After all, I was supposed to be in charge—it was my idea to find this woman, it was my trip, we were using my money. But Saied took the mint tea and the gossip, and I got—well, I don't have to go into that again.

We waited the appropriate amount of time. The sun was disappearing behind a western wall; it was almost time for the sunset call to prayer. I stared at Saied, who was now dozing. Good, I thought, now I get to hit him in the head. I had just gotten up and taken one little step, when he looked up at me. "It's time, I guess," he said, -yawning. I nodded, didn't have anything to add. So I sat back down, and Saied the Half-Hajj went into his act.

Saied is a natural-born liar, and it's a pleasure to watch him hustle. He had the personality module he liked best plugged into his brain—his heavy-duty, steel-belted, mean mother of a tough-guy moddy. Nobody messed with the Half-Hajj when he was chipping that one in.

Back home in the city, Saied thought it was beneath him to earn money. He liked to sit in the cafes with me and Mahmoud and Jacques, all day and all evening. His little chicken, the American boy everybody called Abdul-Hassan, went out with older men and brought home the rent money. Saied liked to sneer a lot and wear his gal-lebeya cinched with a wide black leather belt, which was decorated with shiny chrome-steel strips and studs. The Half-Hajj was always careful of his appearance.

What he was doing in this vermin-infested roadside slum was what he called fun. I waited a few minutes and followed him around the corner and into the coffeehouse. I shuffled in, unkempt, filthy, and took a chair in a shadowy corner. The proprietor glanced at me, frowned, and turned back to Saied. Nobody ever paid any attention to me. Saied was finishing the tail end of a joke I'd heard him tell a do/en times since we'd left the city. When he came to the payoff, the shopkeeper and the four other men at the long counter burst into laughter. They liked Saied. He could make people like him whenever he wanted. That talent was programmed into an add-on chip snapped into - badass moddy. With the right moddy and the right moddy chips, it didn't matter where you'd been born or how you'd been raised. You could fit in with any sort of people, you could speak any language, you could handle yourself in any situation. The information was fed directly to your short-term memory. You could literally become

another person, Ramses II or Buck Rogers in the 25th century, until you popped the moddy and daddies out.

Saied was being rough and dangerous, but he was also being charming, if you can imagine that combination. I watched the shop owner reach and grab the teapot. He poured some into the Half-Hajj's glass, slopping some more on the wooden counter. Nobody moved to mop it up. Saied raised the glass to drink, then slammed it down again. "Yaa salaam!" he roared. He leaped up.

"What is it, O my friend?" asked Hisham, the proprietor.

"My ring!" Saied shouted. He was wearing a large gold ring, and he'd been waving it under the old man's nose for two solid hours. It had had a big, round diamond in its center.

"What's the matter with your ring?"

Hisham caught Saied's flapping arm and saw that, indeed, the diamond was now missing. "Must have fallen out," the old man said, with the sort of folk wisdom you find only in these petrified provincial villages.

"Yes, fallen out," said Saied, not calmed in the least. "But where?"

Saied made a great show of searching the floor around his stool. "No, I'm sure it's not here," he said at last.

"Then it must be out in the alley. You must've lost it the last time you went out to piss."

Saied slammed the bar with his heavy fist. "And now it's getting dark, and I must catch the bus."

"You still have time to search," said Hisham. He didn't sound very confident.

The Half-Hajj laughed without humor. "A stone like that, worth four thousand Tunisian dinars, looks like a tiny pebble among a million others. In the twilight I'd never find it. What am I to do?"

The old man chewed his lip and thought for a moment. "You're determined to leave on the bus, when it passes through?" he asked.

"I must, O my brother. I have urgent business."

"I'll help you if I can. Perhaps I can find the stone for

you. You must leave your name and address with me; then if I find the diamond, I'll send it to you."

"May the blessings of Allah be on you and on your family!" said Saied. "I have little hope that you'll succeed, but it comforts me to know you will do your best for me. I'm in your debt. We must determine a suitable reward for you."

Balance Keepers #1: The Fires of Calderon by Lindsay Cummings
Scrivener's Tale by Fiona McIntosh
To Win the Lady by Nichols, Mary
Checking It Twice (Crashing Book 2) by Samantha Wayland
Comes the Night by Norah Wilson, Heather Doherty
The Silver Ship and the Sea by Brenda Cooper
Doctor's Love (BWWM Pregnancy Romance) by Violet Jackson
Secrets of the Lynx by Aimee Thurlo
Island Intrigue by Wendy Howell Mills
Unscripted by Natalie Aaron and Marla Schwartz
Our partner