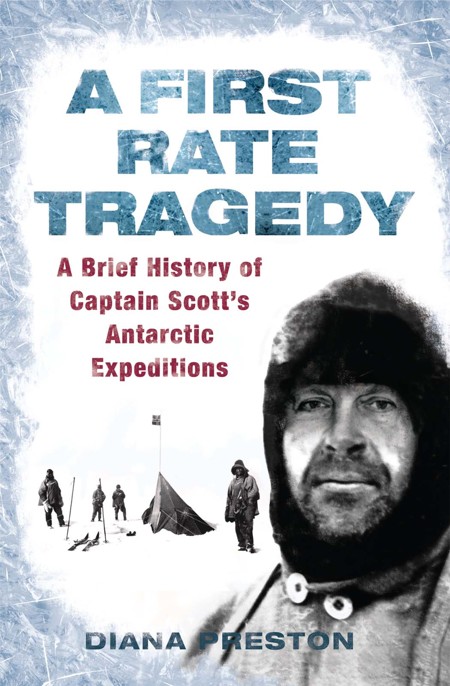 DIANA PRESTON
is a writer and historian who read Modern History at Oxford. Her book,
Before the Fall-Out – From Marie Curie to Hiroshima
, won the
Los Angeles Times
2006 Prize for Science and Technology.

First published in the UK by Robinson,
an imprint of Constable & Robinson, 1997

This edition published by Constable, an imprint of Constable & Robinson, 2011

The right of Diana Preston to be identified as the author of this work has been asserted by her in accordance with the Copyright, Designs & Patents Act 1988.

To my husband
Michael

1 The Early Heats of the Great Race

9 A Matter of Honour

14 ‘What Castles One Builds’

The
Discovery
caught in the ice at McMurdo Sound (
Royal Society
)

The
Discovery
at Dundee (
M. Preston
)

Announcement of Scott’s marriage,
The Tatler
, 1908

Captain Scott at work in the hut at Cape Evans (
H. Ponting
)

A page from the
South Polar Times

Life in ‘the tenements’ in the hut at Cape Evans (
H. Ponting
)

The end of the Winter Journey (
H. Ponting
)

At South Hampstead High School for Girls, a quotation written in large Gothic script and framed in oak used to catch my eye as I hurried between the classes: ‘Had we lived I should have had a tale to tell of the hardihood, endurance and courage of my companions which would have stirred the heart of every Englishman – R.F. Scott.’ Many years later I decided to tell that tale both for its innate power and enduring poignancy and for what it says about the British character and our perception of what constitutes a hero. While researching, I learned that South Hampstead was one of the many schools to be stirred by Scott’s 1910 expedition and to respond to his appeal for dogs and ponies. The reason why his words were still displayed so prominently fifty years after his death became clear at last.

I am indebted once again to my husband Michael for help and advice throughout and for the considerable amount of research and editing he undertook. I am also grateful to Lord Kennet for his kindness in allowing me access to the Kennet Family Papers, lodged in the Cambridge University Library; to Elspeth Huxley for her insight into the personalities of some of the chief players; to Bob Headland, Shirley Sawtell and Philippa Hogg of the Scott Polar Research Institute for their help with consulting the original sources held by the Institute; to the London Library for their efficiency and patience in supplying me with many of the most important published sources; to Clive Bunyan, Assistant Curator Aeronautics Collection, the Science Museum, for advice about developments in aviation in the early years of the century; to Deirdre Sheppard of Antarctica New Zealand, Paul Chaplin of the Antarctic Heritage Trust and Baden Norris, Antarctic Curator, the Canterbury Museum, Christchurch, New Zealand for insight into Scott’s visits to New Zealand and into the condition and preservation of Scott’s huts at McMurdo Sound; to my agent Michael Thomas for his encouragement; to Vera Faith for her research among the newspapers of the time; to Kim Lewison for constructive criticism and advice at a crucial stage; to the Cunard Line for enabling me to visit Cape Town, as Scott did, by sea to carry out research; to Air New Zealand and Mount Cook Airlines for helping with flights to New Zealand’s South Island to enable us to join up with an Antarctic expedition, and finally to Southern Heritage Expeditions Ltd, Christchurch, New Zealand, for making possible an attempt by my husband and myself to visit Scott’s and Shackleton’s huts on McMurdo Sound.

In revising this book in 2009, I am grateful in particular to Susan Solomon for discussing her work on weather conditions, to David Crane for invaluable insights into the character of Scott, to Lady Kennet for renewed access to the correspondence between Captain Scott and his wife Kathleen, to David Wilson for information about his great-uncle Edward Wilson, to Wendy Driver of the Friends of the Scott Polar Research Institute for help and information and to the staff at the Institute for access to the manuscript collection. I am once again grateful to my husband Michael who took a major part in the revision. I am also indebted to Hapag Lloyd and to Quark Expeditions for finally making it possible for me to visit the Ross Sea and Scott’s huts. Last but not least I would like to thank my editor at Constable, Leo Hollis, as well as of course Bill Hamilton and Charlie Brotherstone at A.M. Heath

Unless otherwise stated all distances are given in geographical, i.e. nautical, miles. One geographical mile is equivalent to 1 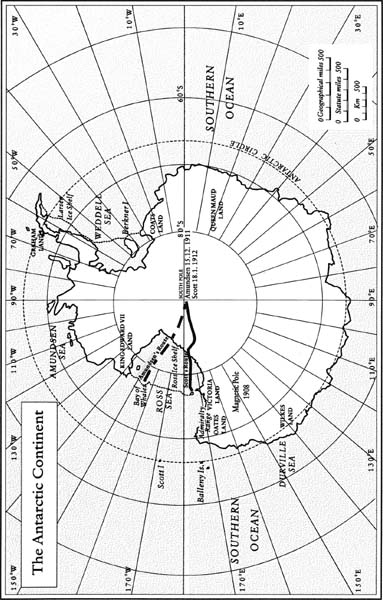 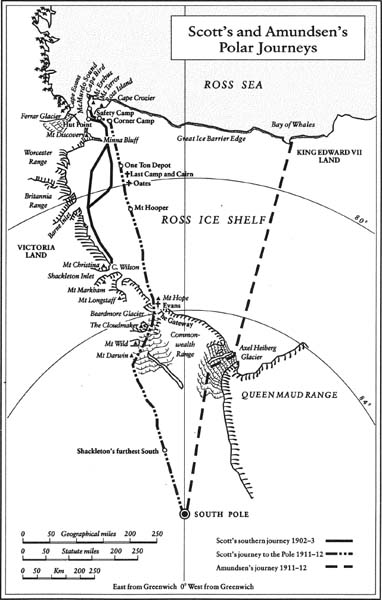 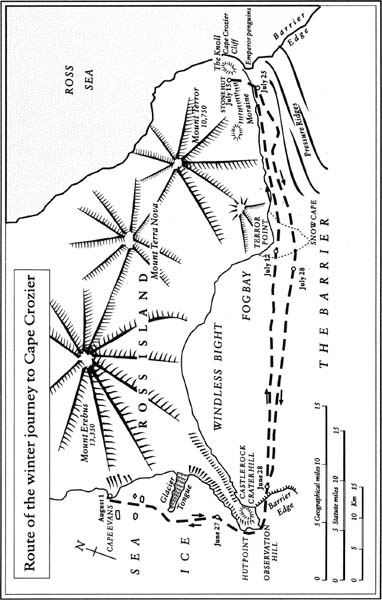 ‘It has happened! We have found what we sought! Good God, what a twist of fate.’ So the young Norwegian Tryggve Gran recorded a grim discovery on 12 November 1912 by a search party trekking across the blinding whiteness of Antarctica’s great Ice Barrier. They had found the snow-covered tent containing the bodies of Captain Scott and his two companions Edward Wilson and ‘Birdie’ Bowers. They had died just eleven miles from the depot of food and fuel that might have saved them. Of the two other members of the Polar party, Captain Oates and Petty Officer Edgar Evans, there was no sign. However, Scott’s diaries and letters, by his body, recounted their terrible fate. It was a story that would resonate throughout the world and make heroes of them all.

Scott and his four comrades had set out over a year before from Cape Evans on McMurdo Sound to plant the British flag at the South Pole and should have returned no later than early April 1912. Yet for some weeks afterwards the party back at Cape Evans had continued to hope. In Antarctica the strange light effects play
tricks on the eyes. Sometimes the watchers thought they could see distant specks on the horizon, men with sledges moving purposefully forward, only to find that it was a mirage or a party of seals lolloping over the ice. Sometimes the sledge dogs would begin to howl as if in greeting and the men would rush outside, shouting out to the cook to get moving, that the Polar party was back, that someone should put a record of the national anthem on the gramophone. On 24 April the sunless Antarctic winter with its ‘nightmares of the darkness’
1
descended, extinguishing any lingering hope.

The question now was how had Scott and his comrades perished? Had they ever reached the Pole? Had they fallen into a crevasse taking their secrets with them? When the sun returned the other members of the expedition felt it was their duty to discover the truth. The search party found their answer just 148 miles from their base. A dark patch revealed itself to be the top of a tent. It was several hours before they could bring themselves to enter and the task fell to the senior officer, Dr Atkinson. What met his eyes was a truly Arthurian scene: the dead hero, Captain Scott, lying frozen in his reindeer-fur sleeping bag, his arm flung out towards Wilson as if seeking comfort. Bowers and Wilson lay on either side of him like faithful acolytes.

Touching From a Distance by Deborah Curtis
DeadEarth: Mr. 44 Magnum by Michael Anthony
Fuckness by Andersen Prunty
Dad Says He Saw You at the Mall by Ken Sparling
Dark Phase by Davison, Jonathan
Liam: Branded Brothers by Raen Smith
My Year of Epic Rock by Andrea Pyros
Captives by Jill Williamson
The Savage Heart by Diana Palmer
Until the End by Tracey Ward
Our partner