Read A Flame in Hali Online

A Flame in Hali 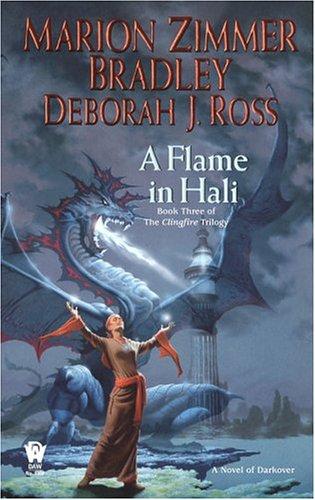 Table of Contents
Title Page
Copyright Page
Dedication
Acknowledgements
AUTHOR’S NOTE
BOOK I
Chapter 1
Chapter 2
Chapter 3
Chapter 4
Chapter 5
BOOK II
Chapter 6
Chapter 7
Chapter 8
Chapter 9
Chapter 10
Chapter 11
Chapter 12
Chapter 13
BOOK III
Chapter 14
Chapter 15
Chapter 16
Chapter 17
Chapter 18
Chapter 19
Chapter 20
Chapter 21
Chapter 22
Chapter 23
BOOK IV
Chapter 24
Chapter 25
Chapter 26
Chapter 27
Chapter 28
Chapter 29
Chapter 30
Chapter 31
Chapter 32
Chapter 33
BOOK V
Chapter 34
Chapter 35
Chapter 36
Chapter 37
Chapter 38
Chapter 39
Chapter 40
Chapter 41
Chapter 42
Chapter 43
Chapter 44
Chapter 45
EPILOGUE
Clingfire Attack!
Dyannis threw her head back to see the third aircar bearing down on them.
NO!
She trembled with the power coursing through her. Memory stirred, branded into the very core of her
laran.
A dragon, a creature of frozen unholy fire, bent over a crowd of lawless men and turned their resolution into groveling terror. The dragon was inside her—it was her—
It was their only chance. It was the one thing she swore she would never do again.
Oh, sweet mother, Blessed Cassilda—help me!
As if in answer to her prayer, Dyannis sensed her brother’s steadfast presence, the strength and complexity of his trained talent, and something beyond him, a luminous pressure. For an instant out of time, her fear disappeared. She soared upon a current of purest light, utterly at peace.
Varzil dropped the shield.
MARION ZIMMER BRADLEY From DAW Books:
SWORD AND SORCERESS I-XXI
THE NOVELS OF DARKOVER
EXILE’S SONG
THE SHADOW MATRIX
TRAITOR’S SUN
The Clingfire Trilogy
(With Deborah J. Ross)
THE FALL OF NESKAYA
ZANDRU’S FORGE
A FLAME IN HALI
Special omnibus editions:
HERITAGE AND EXILE
The Heritage of Hastur | Sharra’s Exile
THE AGES OF CHAOS
Stormqueen! | Hawkmistress!
THE SAGA OF THE RENUNCIATES
The Shattered Chain | Thendara House
City of Sorcery
THE FORBIDDEN CIRCLE
The Spell Sword | The Forbidden Tower
A WORLD DIVIDED
The Bloody Sun | The Winds of Darkover
Star of Danger
DARKOVER: FIRST CONTACT
Darkover Landfall | The Forbidden Tower
TO SAVE A WORLD
The World Wreckers | The Planet Savers

Copyright © 2004 by The Marion Zimmer Bradley Literary Works Trust
All rights reserved.
DAW Books Collectors No. 1299.
DAW Books are distributed by Penguin Group (USA).
All characters in this book are fictitious.
Any resemblance to persons living or dead is coincidental.
The scanning, uploading and distribution of this book via the Internet or via any other means without the permission of the publisher is illegal, and punishable by law. Please purchase only authorized electronic editions, and do not participate in or encourage the electronic piracy of copyrighted materials. Your support of the author’s rights is appreciated.
eISBN : 978-1-101-11814-6
First printing, August

To Ben and Trude Burke,
visionaries for peace
ACKNOWLEDGMENTS
Special thanks, once again, to my editor, Betsy Wollheim, to Ann Sharp of The Marion Zimmer Bradley Literary Trust, to Sherwood Smith, and to a multitude of others who have shown me how life can be lived with dignity, respect, and serenity.
DISCLAIMER
The observant reader may note discrepancies in some details from more contemporary tales. This is undoubtedly due to the fragmentary histories which survive to the present day. Many records were lost during the years following the Ages of Chaos and Hundred Kingdoms and others distorted by oral tradition.
AUTHOR’S NOTE
Immensely generous with “her special world” of Darkover, Marion loved encouraging new writers. We were already friends when she began editing the DARKOVER and SWORD & SORCERESS anthologies. The match between my natural literary “voice” and what she was looking for was extraordinary. She loved to read what I loved to write, and she often cited “The Death of Brendan Ensolare” (FOUR MOONS OF DARKOVER, DAW, 1988) as one of her favorites.
As Marion’s health declined, I was invited to work with her on one or more Darkover novels. We decided that rather than extend the story of “modern” Darkover, we would return to the Ages of Chaos. Marion envisioned a trilogy beginning with the Hastur Rebellion and A FLAME IN HALI, the enduring friendship between Varzil the Good and Carolin Hastur, culminating in the signing of the Compact. While I scribbled notes as fast as I could, she would sit back, eyes alight, and begin a story with, “Now, the Hasturs tried to control the worst excesses of
laran
weapons, but there were always others under development . . .” or “Of course, Varzil and Carolin had been brought up on tales of star-crossed lovers who perished in the destruction of Neskaya . . .”
Here is that tale.
Deborah J. Ross
PROLOGUE
R
umail Deslucido had cheated death before, but now it had come for him at last. He lay on a cot, as sagging and creaking as his failing body, in the dingy room that had been his refuge and his prison, and waited. Each breath had become a battle to suck air into his scarred lungs. With each passing moment, his heart stuttered as if it, too, trembled with the exhaustion of having lived too long.
The door opened and the girl from the village stepped in, carrying a basket of bread and an earthenware jar. He sipped the broth as she spooned it for him, then lay back. She spoke to him, things of little consequence, not worth the effort of listening. Her voice faded, mingling with the memories of other voices. Sometimes he spoke with men long dead—his royal brother . . .
Ah! There was the unbowed golden head, the eyes brimming with fire and victory. Once again, they stood together on a balcony while below them, the white-and-black-diamond-patterned banners of Deslucido rippled in the breeze. The morning sun burnished the King’s hair to a natural crown. He spoke, and his words painted visions in Rumail’s mind, hope for a time when these Hundred Kingdoms might be united into a single harmonious realm. No more incessant warfare, no more petty bickering while men bled out their lives upon the ruined fields. Rumail’s
laran
talents would be celebrated, his place as Keeper of his own Tower, so long denied by those head-blind purists, secure. . . .
The bright sky darkened, the vision blew away like winter-dried leaves, and now Rumail stood on the battlefield at Drycreek, where his brother’s army had clashed with that of King Rafael Hastur. His brother’s soldiers paused to gaze skyward. Hovering above the enemy, Rumail’s mechanical birds released showers of glowing green particles, as eerily beautiful as they were deadly: bonewater dust, forged by the concentrated power of Gifted minds, bought at great cost from a renegade circle.
Even as Rumail watched the luminous poison drift toward the unsuspecting enemy, he wished there had been some other way to stop the Hastur King and his witch-born niece, Taniquel Hastur-Acosta. By treachery and psi-wielding servants of their own, they had turned the tide of battle.
I had no choice. None of us had a choice.
Rumail had relived the scene a thousand times, from the first moment victory slipped away with the sudden shift of the wind that blew the bonewater dust back upon their own forces. As if it were yesterday, he remembered that mad scramble of retreat, men and beasts perishing within a heartbeat, with thousands more doomed to a lingering death. He himself had narrowly escaped. Wounded, barely able to maintain a psychic shield against the toxic dust, he had clung to the merest shred of hope.
He should have perished there, immobilized and helpless. But he did not. He had escaped death then, as he had before, as he would again. The gods had another destiny for him, not as one more nameless body on a field no one dared cross for a generation or more.
Now, in his memory, he stood high upon a Tower balcony, wrapped in the crimson robes of a Keeper. At last, he commanded a circle of his own, and no matter how its workers might despise him, they would obey. Their Tower was sworn to his brother the King, and it was by his orders they now mounted their attack upon a Hastur Tower.

Thin Air by Rachel Caine
The Officer's Promise (Brothers in Blue Book 1) by K. Langston
And Yesterday Is Gone by Dolores Durando
Overkill by James Barrington
Beneath the Surface by Heidi Perks
Dark Angel (Anak Trilogy) by Sherry Fortner
Collecte Works by Lorine Niedecker
Midnight My Love by Anne Marie Novark
Perseverance Street by McCoy, Ken
The Stolen by Celia Thomson
Our partner