A Forbidden Tryst (A Taboo Tale #1) 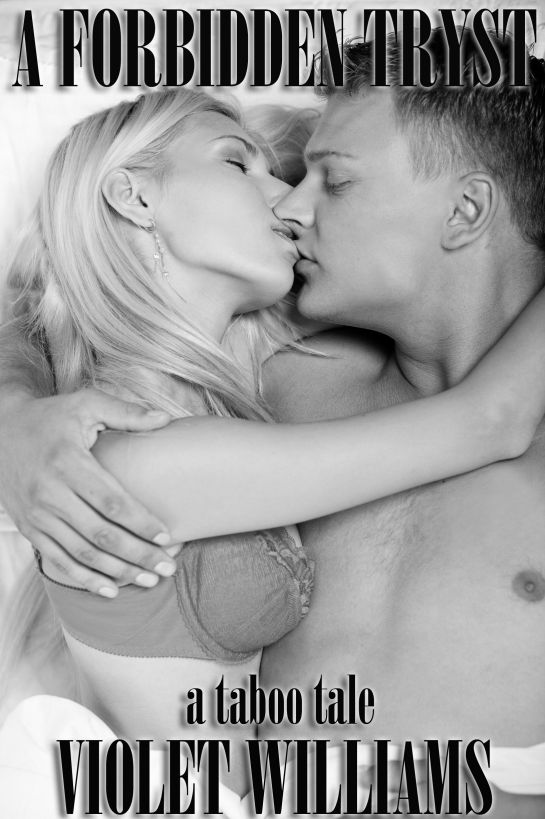 Published by Quiver Publishing at
Smashwords

Davis Kensington is a
successful man, lucky in life and love. He's at the helm of one of
the most powerful law firms on the east coast. He reconnected with
his college sweetheart and married her. His life was
perfect...until a car accident changes everything.

Jess Capshaw is eighteen and
living the dream. When her artsy mother settles down with one of
the most eligible bachelors in town, she's whisked away to a life
of wealth and privilege...until a car accident rips her mother
away.

One forbidden tryst will
bring them devastatingly close, throwing caution to the wind. But
their taboo behavior will have consequences...

Content warning: A Forbidden
Tryst features pseudo incest, forced consent and graphic sex in
virtually every chapter. All characters engaging in sex are 18+ and
this title is intended for adult audiences only.

This eBook is licensed for your personal
enjoyment only. This eBook may not be resold. If you would like to
share this book with another person, please purchase an additional
copy for each person you share it with. If you're reading this book
and did not purchase it, or it was not purchased for your use only,
then you should return to an online retailer and purchase your own
copy. Thank you for respecting the author's work. 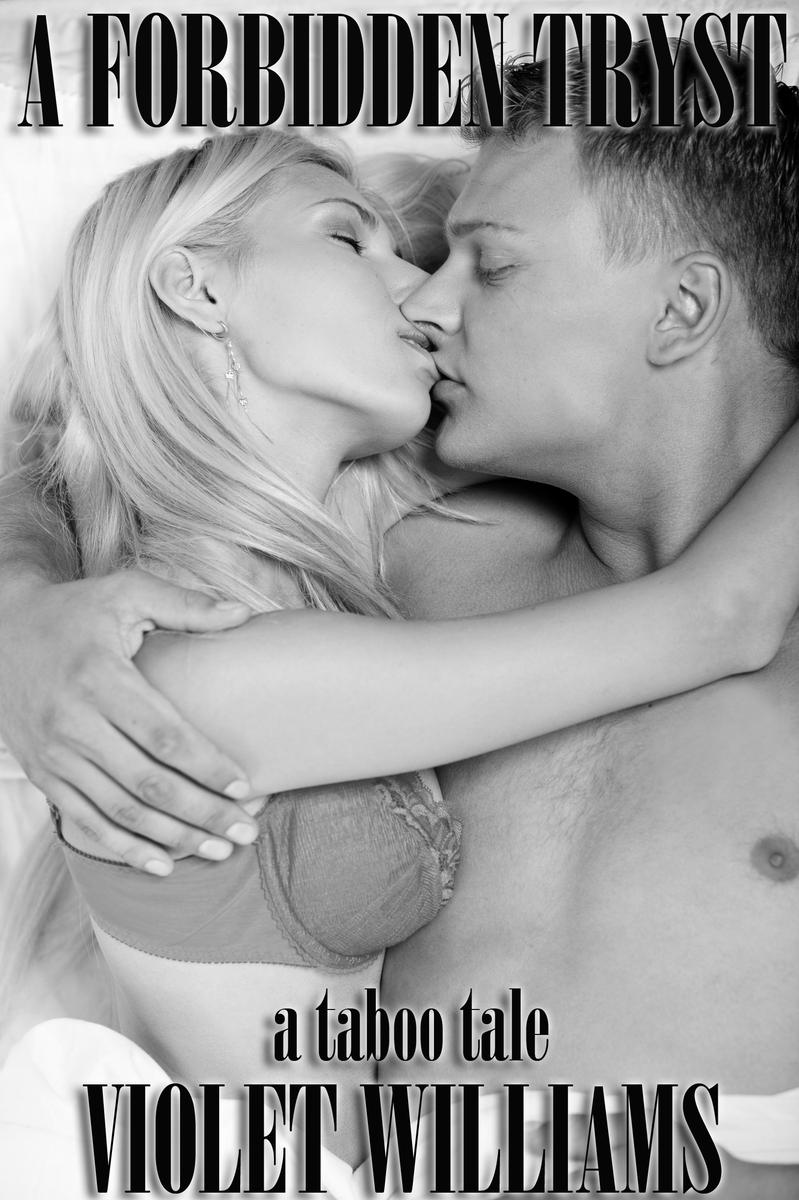 Chapter One:
A Guilty
Conscience

Chapter Six:
A Lover, A
Doctor

Chapter Eight:
A Side of
Nausea

“
No car this weekend,”
Davis Kensington snapped, eyeing his stepdaughter with
disappointment.

Jess barely even flinched as she eased into
the cushy chair beside him, pouring herself a glass of orange
juice.

“
And I want you home by
eight p.m. Your last class ends at seven and Creighton State is
only fifteen minutes from here.”

His only response was a perfect eye roll as
she took a sip of juice.

“
I mean it Jess,” he said
adamantly.

“
I was only out like, an
hour past curfew,” she said saucily. “It’s not a state of emergency
or anything.”

“
Just because your mom’s
not around doesn’t mean this is party central,” Davis said through
clenched teeth. “You were supposed to be home at 1am. Not 1:05, and
certainly not 2:30.”

Jess flipped her blonde hair over her bare
shoulder and let out an annoyed sigh. “You’re so adorable when you
play daddy.”

Davis’ cheeks were warm as he glanced at
Toshi, the maid that was stocking the dishwasher a few feet away.
If she heard the overtly sexual tone in Jess voice, she had one
hell of a poker face. Toshi just kept her head bowed, continuing to
load the dishes.

When Davis had brought Claudia and Jess to
the corporate retreat last summer, his associates had barely hidden
their lust as their eyes roamed Jess’s scantily covered curves.
She’d worn a paper thin white linen dress that left very little to
the imagination that day. Davis had fought Claudia tooth and nail,
knowing he’d be in for an earful on how scrumptious his
stepdaughter looked. Claudia had just laughed, her brilliant blue
eyes sparkling as she reminded him that Jess was almost eighteen
and old enough to express herself as she deemed fit.

And what Jess deemed fit was practically
nothing at all. Davis took a hearty bite of his toast, remembering
the barely there number she’d worn in the ER while they waited to
hear news after Claudia’s wreck. When the doctor came out with a
grave look on her face, he’d had to use his jacket to cover Jess as
she fell to the floor, her sobs echoing through his heart.

Davis could have walked away from it all with
a clear conscience. He and Claudia had only been married for a year
after all. He’d had no real connection to Claudia seeing as she was
practically an adult when she and her mother moved in. But his
heart just wouldn’t let him…and his head reminded him daily that it
was a mistake.

Jess was headstrong, and as far as he could
tell, had aspirations to become the next Paris Hilton. She only
went to the classes she felt like when her mother was alive and
now, he was lucky if she went to one a week.

But whenever he looked into Jess’s eyes,
Claudia's eyes, he knew that as frustrating as she was at times, he
couldn't refuse her a thing.

He glanced over at her, blonde hair creating
a golden curtain as she typed away on her cell.

"I'm not kidding about the car," Davis added
futilely. "To school and home and nowhere else."

Jess didn't look up from
her phone, but a mischievous smirk spread across her face. "What're
you gonna do if I disobey you,
daddy
? Spank me?"

His throat went dry at her brazen statement
and his mind drifted back to that night they’d spent together.
Davis had spent most of the days after Claudia's funeral lumbering
about like a zombie. His usually sleek, tailored face was harried
and in desperate need for a shave. His toned body remembered the
feel of the machines in the gym, but it had been weeks since he'd
even done a crunch. What little work he accomplished for the firm
was done from bed, if at all.

That night, he'd been just lying in the
tangle of covers, letting his grief keep him warm. He could still
smell Claudia's perfume that hung over the bed in a velvet haze.
He'd closed his eyes and inhaled deep...and when he opened then,
Jess stood at the foot of the bed.

Her lithe figure was on full display. She
only wore a fire engine red lace bra and panties that left little
to the imagination. Just her style.

When he'd asked her what the hell she was
doing, her reply was, "I'm gonna fuck your brains out."

And she had. Davis throbbed with desire just
remembering how wet her tight little pussy had been on his fingers,
on his dick. She'd rode him like a banshee, her screeches driving
him wild...and setting him free for one pleasure filled hour.

But when they'd come down and he'd held Jess
in his arms, the same arms that held her mother, he'd felt
sick.

While it was no backwoods union since they
shared no blood, his conscience ate at him. What kind of stepfather
fucks his stepdaughter mere months after his wife was killed? Hell,
what kind of man does something like that at all?

So he'd made himself a promise. It was one
moment of weakness...that could never be repeated.

But Jess tempted him...walking around the
house with her delicious body calling to him like a siren. She shot
him brazen glances that said she was mere moments from begging him
to make love to her. And to top it off, she made little comments
like the one that just fell from her succulent lips about spankings
and playing daddy.

He cleared his throat and pushed back from
the table. "I'm off to work." He leaned down his lips brushing
Jess's ear. "Stop it, Jess."

She put her phone down and trailed her
fingers down her neck, eyelashes fluttering. "Stop what,
Daddy?"

He snapped back up, crossing his hands over
his groin as he thanked God that Toshi's back was to them.

"Could you at least make an attempt at going
to class today?" he asked hotly.

Davis rolled his eyes to the heavens and
pushed out of the kitchen. Now he had to drive all the way to work
with a raging hard-on.

"You want me to fix you a sandwich for
lunch?" Toshi asked from the sink. She tucked a gray dread behind
her ear as she gathered the cleaning supplies from beneath the
sink.

"Nah," Jess said, taking one final gulp from
her juice. "I'll just grab something on campus."

Toshi shot her a look that said she knew Jess
had no intention of stepping foot on campus.

"What?" Jess snapped, her cheeks burning hot.
"I'm caught up on the homework. My professors don't even take
attendance."

"I didn't say a thing," Toshi said, spraying
the counter.

“
I know you, Toshi,” Jess
said, sticking out her tongue. “You don’t have to say a
thing.”

“
You should worry a little
less about what I’m thinking and a little more about the way you’re
talking to Mr. Kensington,” Toshi said, swiping a towel.

“
You know exactly what I
mean. You should give your father a little more respect, Jessie,”
Toshi murmured from the sink. “It would break your mother’s heart
to see how saucy you get with him.”

Jess’s lips became a thin line. “First off,
he’s not my father. He’s the guy that was married to my mom for a
year. And second, I’m not some child that he can ground. I’m almost
nineteen years old for god’s sake!”

Toshi shook her head. “And where would you be
without him?”

"I'm gonna go take a shower," Jess said to no
one in particular, sliding away from the table. Mostly she wanted
to escape Toshi's disapproving eyes. She'd been with Jess and her
mom for years and so she really was like a surrogate mom. She hated
to make her disappointed, even if it was only slightly.

As Jess walked into the foyer, she wondered
if Toshi could pick up on the sexual tension between her and Davis.
She couldn't help but tease him, especially when he went all
parental mode.

Nah
, she assured herself as she walked up the spiral staircase.
She bit her lip as she traced the mahogany wood. Even she couldn't
believe that she'd actually hooked up with Davis. Not that he
wasn't sexy in a suave George Clooney-ish way. When she'd first met
him and he’d flashed a signature megawatt smile, she'd been reduced
to a bumbling idiot.

She turned onto the back hall, walking past
the projection room and the upstairs Jacuzzi. Sitting like some
sort of harbinger of doom, a wedding picture of Davis and her mom
stared back at her, mere feet from her bedroom.

Jess never imagined Davis would actually
marry her mother. She’d heard the story a dozen times. They’d met
in a sociology class and had quite the affair and reconnected in a
grocery store years later. The fact still remained that her mom was
a hippy, earthy woman that listened to NPR; he was a suit that
drove a Lexus. Before they got hitched, Jess and her mom lived in a
modest bungalow in the city; he lived in a mansion on the ritzy
side of town. Her mother's 18th birthday present to Jess was a
framed print from a local artist; Davis bought her a brand new
BMW.

Jess had given Davis a hard time all the
while…it was her job, right? Stepdads and stepdaughters are
supposed to knock heads. But deep down she cared about him and knew
he cared about her mom. And they all lived together like it had
always been that way for a little over a year...until some drunken
asshole plowed into her mother's sedan and changed everything.

Sword of Apollo by Noble Smith
Indexical Elegies by Jon Paul Fiorentino
Island of the Forbidden by Hunter Shea
No Way to Treat a First Lady by Christopher Buckley
You Cannot Be Serious by John McEnroe;James Kaplan
Ghost Story by Peter Straub
A Prince For Sophie by Morgan Ashbury
Pleasuring Anne by Tessie Bradford
Balance of Power by Stableford, Brian
The Badger's Revenge by Larry D. Sweazy
Our partner