Read A Glimpse at Happiness Online

A Glimpse at Happiness 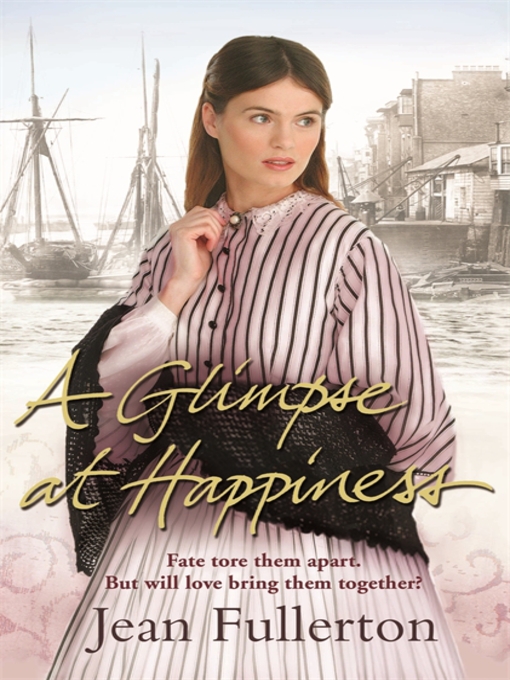 When Josie O'Casey returns to London after twelve years in America, she is overjoyed to discover that her childhood sweetheart Patrick Nolan, who she believed to be dead, is alive and well. But Josie's happiness is short-lived - Patrick now belongs to another. Heartbroken, Josie vows to forget about Patrick and settle back into life in the East End. But the East End that Josie knew as a child is much changed. While Josie can remember only too clearly her poverty-stricken upbringing, her family's social standing has vastly improved since they've been away. And there are some who resent that Josie left behind the slums of London to return as a lady. Torn between two worlds, Josie is still drawn back to her childhood haunts - and to Patrick. When the couple are finally offered a glimmer of hope, their chance at happiness is threatened by the all-powerful Ma Tugman and her criminal empire. Now Josie must decide if she is willing to forsake everything for the man she loves...

A Glimpse at Happiness
JEAN FULLERTON

Orion
www.orionbooks.co.uk
An Orion ebook
First published in Great Britain in 2009 by Orion Books, an imprint of The Orion Publishing Group Ltd Orion House, 5 Upper Saint Martin’s Lane London WC2H 9EA
An Hachette UK Company
1 3 5 7 9 10 8 6 4 2
Copyright © Jean Fullerton 2009
The moral right of Jean Fullerton to be identified as the author of this work has been asserted in accordance with the Copyright, Designs and Patents Act of 1988.
All rights reserved. No part of this publication may be reproduced, stored in a retrieval system, or transmitted in any form or by any means, electronic, mechanical, photocopying, recording, or otherwise, without the prior permission of both the copyright owner and the above publisher of this book.
All the characters in this book are fictitious, and any resemblance to actual persons living or dead is purely coincidental.
A CIP catalogue record for this book is available from the British Library.
eISBN : 978 1 4091 1321 8
www.orionbooks.co.uk
This ebook produced by Jouve, France
For my three daughters, Janet, Fiona and Amy, to thank them for their love and support and for putting up with a constantly distracted mother.
Acknowledgements
As with my first book,
No Cure for Love
, I have used numerous sources to get the period setting and feel of
A Glimpse at Happiness
right, but I have to mention a few books and authors to whom I am particularly indebted.
First and foremost, Henry Mayhew, deceased, for his detailed contemporary accounts of the poor in
London Labour and the London Poor
(edited by Neuburg, Penguin, 1985) and
The London Underworld in the Victorian Period
(Dover Publications, 2005). His painstaking reporting of the worries, concerns and language of the people he interviewed and scenes he witnessed allowed me to hear the voices and see the lives of the men and women of London as if I were there myself. My fellow East End author Gilda O’Neill’s book
The Good Old Days
(Penguin, 2007) has given me an invaluable insight into various aspects of 19th century life in East London, as did the out of print
The East End of London
by Millicent Rose (The Cresset Press, 1951). This account of East London was written before the slum clearances in the late 50s and early 60s and gives a tantalising glimpse into tight-knit communities clustered around the London docks before they were dispersed to high-rise flats and post-war estates. Judith Flanders book
The Victorian House
(Harper Perennial, 2003) helped me with the little details of Ellen and Robert Munroe’s family life, while Lisa Picard’s
Victorian London
(Orion Books, 2005) helped me with the details of Victorian London life, such as public baths. I also want to mention
Love and Toil: Motherhood in Outcast London 1870-1918
by Ellen Ross (Oxford University Press, 1993). This detailed academic study has vivid accounts of the trials and tribulation of mothers struggling to raise their children in squalor and poverty in Victorian London. There are several photographic books of old East London that helped me visualise what the streets of East London looked like when Josie and Patrick walked them. These include
East London Neighbourhoods
by Brian Girling (Tempus, 2005)
Victorian Street Life
by John Thompson (Dover Publications, 1994) and
Dockland Life
by Chris Ellmers & Alex Werner (Mainstream Publishing, 1991). One photo in particular, The Bustle of the Pool of London at Black Eagle Wharf Wapping, which is part of the Museum of London collection, is particularly evocative. Google it and see what I mean. Lastly, and by no means least, I would like to mention author Lee Jackson’s brilliant website The Victorian Dictionary (
http://www.victorianlondon.org/
) which is packed with everything you could ever imagine about Victorian London.
I would also like to take the opportunity to thank a few people. My friend Dee, for being there for me always. My fellow historical author Elizabeth Hawksley, for her help in untying the knots in my plot. My many friends in the Romantic Novelist Association who encourage me, in particular Janet Gover and Fenella Miller. My lovely agent Laura Longrigg, who gets long emails from me detailing everything I’m doing and thinking but still smiles warmly at me whenever we meet. Finally, but importantly, a big thank you to the editorial team at Orion, especially Sara O’Keeffe and Natalie Braine, firstly for loving my stories and secondly, turning my 400+ pages of type print into a beautiful book. 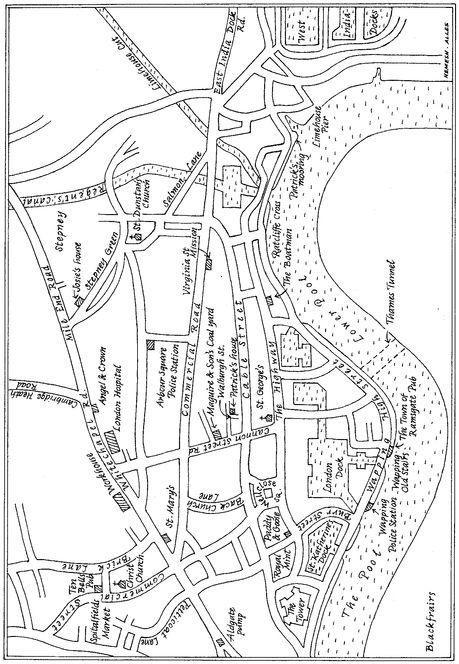 Prologue
Wapping, East London, 1844
Ma Tugman, owner of the Boatman freehouse, wedged herself into her usual chair beside the counter of the main bar. The pub was the only thing of any worth she’d got from her old man. Snapper, her stubbed-nose terrier with a temper as short as his docked tail, shuffled under her chair and lay down with a loud huff. Ma’s broad hips spread across the surface of the seat and her feet just skimmed the sawdust-covered floorboards. She could feel the tightness around her ankles so she wriggled her toes inside her scuffed boots. The pain was always worse at the end of the day.
The Boatman was set a few streets back from the river and tucked up the side of Lower Well Alley. It wasn’t frequented by watermen with wages burning holes in their pockets, as the Prospect or the Town were, but then it didn’t have the peelers from Wapping police office passing through its doors either.
Ma rested her hands on the curved wooden arms of the chair and leant back. It was just after six and they would light the lamps in a while, but for the next half hour or so the light from outside would be enough. Not that it could illuminate much of the interior: most of the windows were covered by packing cases instead of glass, leaving the light from outside to cut through the darkness in haphazard shafts. Daylight never reached the back of the narrow bar, so the full extent of the beer stains and ground-in dirt on the floor remained hidden.
In the dim recesses of the room, men hunched over their drinks while a few of the local trollops jostled for their first customers of the night.
Ma thrust her hand under one pendulous breast and scratched vigorously. She had been a looker years ago but had long since given up wearing stays. She glanced across the bar at the thin young woman cleaning the tankards and yelled across at her to bring a brandy.
The girl dried her hands and brought over a bottle and short glass, just as the door opened to admit Harry, Ma’s eldest son. He stumbled in with his brother, Charlie, a step or two behind, then a wild-eyed Tommy Lee, a bargeman from Chapel Street.
Ma’s gaze ran over her first-born. He had his father’s looks - square and stocky. Unfortunately, he also had his father’s hair, which had started to disappear in his early twenties. Rather than try to comb over what was left of it, Harry had shaved his head clean with his razor. Ma shifted her gaze to her other son, Charlie, ten years Harry’s junior, and smiled. He had her slighter build and topped his brother by half a hand. He also had her golden hair, which she had spent hours combing and curling when he was a small boy.
Elbowing aside the men clustered near the door, Harry stomped across the floorboards, Charlie and Tommy Lee following close behind.
‘’Ows me best gal?’ Harry asked, kissing his mother on her forehead.
‘All the better for seeing my sweet boy,’ she answered smiling at his brother.
Harry’s lower lip jutted out. He fumbled in his pocket and pulled out a red and green apple. He threw it in the air, bounced it off his bicep and caught it again. ‘I got this from Murphy’s stall. He said I was to give it to you, to brighten your smile.’ He handed it to her.
ADS
15.4Mb size Format: txt, pdf, ePub

Origin by Jessica Khoury
Dance and Skylark by John Moore
The Lies That Bind by Lisa Roecker
Boy Erased by Garrard Conley
Salamander by David D. Friedman
Run the Risk by Lori Foster
The Crown by Colleen Oakes
Beyond A Wicked Kiss by Jo Goodman
Naked Hunger: Naked Cowboys, Book 8 by Desiree Holt
The Sweet Spot by Ariel Ellman
Our partner