A Good Day To Die 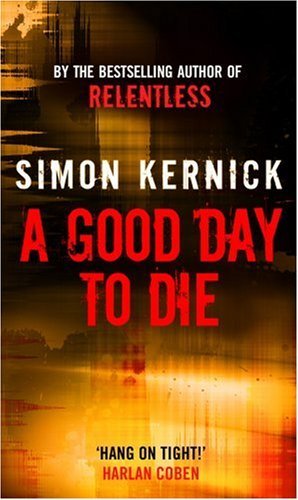 A Good Day
to Die

Simon Kernick has asserted his right under the Copyright, Designs and Patents Act 1988 to be identified as the author of this work.

This book is sold subject to the condition that it shall not, by way of trade or otherwise, be lent, resold, hired out, or otherwise circulated without the publisher's prior consent in any form of binding or cover other than that in which it is published and without a similar condition, including this condition, being imposed on the subsequent purchaser.

For my Mum and Dad

Simon Kernick lives near London and has two young children. His novels,
The Business of Dying, The Murder Exchange, The Crime Trade, A Good Day to Die, Relentless
(selected as a Richard & Judy Summer Read) and
Severed
are available as Corgi paperbacks, as is his new novel,
Deadline.

The research for Simon Kernick's novels is what makes them so authentic. His extensive list of contacts in the police force has been built up over more than a decade. It includes long serving officers in Special Branch, the National Crime Squad (now SOCA), and the Anti-Terrorist Branch, all of whom have plenty of tales to tell.

For more information on Simon Kernick and his books, see his website at
www.simonkernick.com

THE MURDER EXCHANGE
Ex-soldier Max Iversson is hired to provide security for a meeting that goes disastrously wrong.

'From hardboiled cops to ruthless women on the make, Kernick generates a potent cocktail of thrills'
Guardian

THE CRIME TRADE
DI John Gallan and DS Tina Boyd uncover a murderous conspiracy that will take them to the heart of London's most notorious criminal gang.

A GOOD DAY TO DIE
Exiled cop Dennis Milne returns to London to hunt down the murderers of a close friend.

RELENTLESS
Tom Meron finds himself on the run, pursued by enemies he never knew he had ...

'This is the sort of book that forces you to read so fast you stumble over the words. Phenomenal!'
Evening Standard

SEVERED
You wake up in a strange room on a bed covered in blood. And you have no idea how you got there ...

'If you like lots of non-stop action, this is for you'
Guardian

I originally wrote my first novel,
The Business of Dying,
as a stand-alone thriller and had no plans to bring back my main protagonist, renegade cop and moonlighting hitman, Dennis Milne. At the end of the story, however, he managed to evade justice, and escaped to the faraway shores of the Philippines - a country I plucked out of thin air as a suitably exotic bolt-hole, having no knowledge of the place at all.

And that, I thought, was that and moved on to my next book.

But you can't keep a good, or perhaps I should say a bad, man down - and that was the thing: I loved Dennis as a character, and missed him. Perhaps it's the fact that he has so many flaws - not least that, technically, he's a murderer. Yet despite this, he still manages to remain likeable. To me, anyway. He has my sympathy because he has a strong sense of natural justice. Indeed it's this that persuades him to be a hitman in the first place because it gives him the opportunity to punish the people he sees as the bad guys. So when his old friend and colleague, Asif Malik, is murdered back in London in an unsolved case, Dennis, now exiled in the Philippines, knows he has to return home and find out who's behind it.

A Good Day to Die
opens in the Philippines, and to research the book I visited the country before I started writing. The trip proved to be a real eye-opener. As
soon as my travelling companion and I arrived, we got an understanding of the craziness of the place. The car that was to transfer us south from Manila Airport failed to materialize, and we were forced to take a bone-jarring taxi ride down to the coast with a driver who seemed to know the local area even less than we, as we tried to catch the last ferry to the island of Mindoro.

Predictably the ferry had gone by the time we arrived, and the jetty was deserted. Just as we were contemplating a night sleeping rough, a group of men emerged from behind a disused building, two of whom were only wearing what appeared to be loincloths, like extras in a
Tarzan
movie. Without warning, and before the driver could escape, they jumped in the car, the biggest one plonking himself on my lap, and offered to take us to Mindoro in their luxury speedboat.

Our taxi driver advised us not to go anywhere with these men, but they weren't budging, and without them neither were we, so after negotiating a price of 2500 pesos (roughly thirty quid) we took them up on their offer, and they directed our driver along some deserted back-roads until we came to a mosquito-ridden swamp, in which sat one of the most dilapidated wooden boats I've ever seen. As the taxi driver chucked out our cases and disappeared into the distance in a cloud of dust, our new friends welcomed my mate Matt and I aboard our unluxurious transport, whereupon they then proceeded to double the price of our passage.

After a perilous three hour boat ride across some of the deepest seas in the world, with me constantly wondering when we were going to be robbed, murdered, and our bodies dumped into the inky waters below, we got to Mindoro in the end. Having extorted five thousand pesos from us, the cheeky bastards then tried to get a tip for their troubles!

But the journey was worth it, and I quickly fell in love with the island. With its huge forest-covered mountains, its heavily manned army roadblocks and patrolling helicopter gunships on the constant lookout for the communist rebels who still lingered only a few miles from the ramshackle tourist resorts, it represented the perfect home from home for Dennis.

I wrote much of the first part of the book in the all too short time we spent there, before returning to London in the bleak, crowded depths of winter, just as Dennis does in this book. I was hugely re-energized, though, writing much faster than I'd ever done before, and changing much of the plot in a way I don't usually do to accommodate my own experiences.

Right up to the very end, I was never sure whether or not Dennis would survive his violent yet cathartic journey to the city that had once been his home, and I'm not going to tell you now either whether he does or not. You'll just have to turn the pages to find out!

I hope you enjoy reading
A Good Day to Die
as much as I enjoyed researching and writing it.

Richard Blacklip wanted to kill someone.

He'd been told before he left England that the man now sitting across the table from him could make the necessary arrangements. Mr Kane was, apparently, a fixer of such things, and in the sprawling, dirt-poor and life-cheap metropolis that was Manila, where almost anything could be bought and sold if the price was right, he had ready access to a constant supply of victims. It was now simply a matter of finding that price.

A call to Kane's mobile phone an hour earlier had set the meeting up, but now that his guest had arrived in the hotel room, Blacklip was beginning to have second thoughts about the whole thing. Not because he didn't want to go through with the act itself (after all, the truth was that it wasn't his first time), but because he was alone in a strange city thousands of miles from home, and was unsure of discussing his innermost thoughts
and secrets with someone he'd only just met. Kane was supposed to be reliable, but what if he wasn't? What if he was a conman? Or worse still, working for the police, here to entrap him? Blacklip was aware that he was being paranoid, but that didn't mean his fears might not be justified.