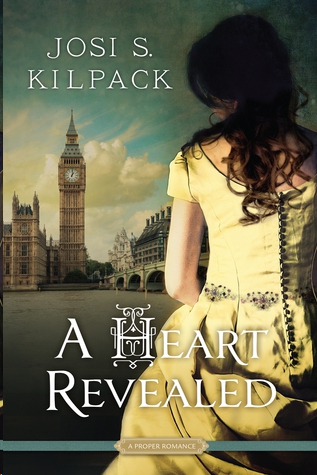 © 2015 Josi S. Kilpack.
All rights reserved. No part of this book may be reproduced in any form or by any means without permission in writing from the publisher, Shadow Mountain
®
. The views expressed herein are the responsibility of the author and do not necessarily represent the position of Shadow Mountain.

All characters in this book are fictitious, and any resemblance to actual persons, living or dead, is purely coincidental.

Set in Regency England, Amber Marie Sterlington is the most sought after young woman in London, but when she begins to lose her hair (due to alopecia areata), Amber is exiled to the countryside where she meets Thomas Richards. Even as she is falling in love with him, she knows she must end things before he realizes what she’s been hiding from him.

Other Books by Josi S. Kilpack

To Thomas Richards and Amelia Hey, my personal link to England. Thank you for the legacies.

Thomas knew the moment Amber Sterlington entered Almack’s ballroom. Not because he was watching the door, or because someone spoke her name. No. The reason Thomas Richards knew when Miss Sterlington entered the room was because every gentleman straightened his bearing and turned his head in her direction. Simultaneously, the women in the room either narrowed their eyes or raised their chin a fraction of an inch in the feminine version of the same response. Amber Sterlington was the Rage of the Season, after all, and in the space of a glance and a breath, the room was changed by her arrival.

Thomas cared little for the attention
society
gave to her, but like everyone else, he reacted to her arrival by standing a bit taller in case she looked his way. The truth was that Amber Sterlington was quite simply the most attractive woman he had ever seen, and he was as struck by her arrival as every other man.

In the month he’d been in London, this being his third Wednesday night ball at Almack’s, he’d seen Miss Sterlington nearly a dozen times at a variety of events, and his reaction to her had been equally profound each time. When his notice passed, he berated himself for it, wanting to believe himself a man apart from such fancy. She would marry for title or fortune or both—everyone knew it—and as a younger son of a modest Baron, Thomas offered neither, which made his attraction toward her that much more vexing.

Her sultry laugh washed over him, serving as yet another defining quality that set her apart from the trilling young women of the
ton
. Everything about that woman was equal parts distracting and irritating to Thomas, who in every other case felt himself to be a logical, determined, and well-balanced sort of man.

“As you were saying, Mr. Richards?”

Thomas returned his attention to the young woman standing before him, holding a glass of lemonade in her delicate hands and looking at him with the wide-eyed expression of interest he expected had been taught to her by her mama, a woman who had made no secret of how eager she was to marry off her youngest daughter.

He was not entirely opposed to Miss Carolyn Morton. She possessed the manners of genteel birth and did not seem the type who would drag her future husband to London because she loved the social atmosphere Thomas found so tedious. It was her level of intellect that worried him. Despite the dire warnings against having a bluestocking for a wife, Thomas wished to find a bride with whom he could converse on occasion. He had not realized it would be so difficult a prospect. While a great many of the season’s debutantes had been taught of literature and art—two areas of study he also enjoyed—none could give much critical opinion on either topic nor did they know the slightest bit regarding matters of economics or politics.

But Miss Morton
was
an agreeable girl, and Thomas had been so distracted by Miss Sterlington’s entrance that he had broken off his reply regarding his thoughts on the current parliamentary session.

“Yes,” Thomas said, remembering the conversation he’d let slip away. “As I was saying, I am hopeful that parliament will address the agriculture reforms Northern England is in such desperate need of. As mining gains greater investment, I fear for the future of the herds and fields that England is dependent upon. Should the mining industry continue to take such liberties with the land and subsequent water rights they are buying out at an alarming rate, I shouldn’t doubt that we’ll be importing beef from the continent. A repulsive solution, to my mind, when we have the resources to be self-sustaining if parliament will but protect the interests that are most certainly theirs as well as those of all England.”

Miss Morton nodded, but he’d seen the blankness enter her expression and knew he had gone too far afield with information of no interest to his companion. In an attempt to repair the situation, Thomas bowed slightly and smiled at the girl most chivalrously. “Would you care to dance the next quadrille, Miss Morton?”

The light he’d cast out of her face with his talk of cows and corn immediately refreshed itself, and she nodded so quickly that the curls on either side of her face jiggled as though they too were excited to take the floor. Miss Morton smiled, revealing broad front teeth he would not mind so much if the girl were a bit more engaging to talk with. “I would most definitely like to dance a quadrille with you, Mr. Richards.”

“Capital,” he said with a slight incline of his head. “I shall return for you when this set has finished.”

She bobbled those curls again as Thomas made his way through the crowd toward one of the assembly rooms not so tightly occupied. He could only abide crowds for so long, and he needed a moment to himself before leading Miss Morton across the dance floor. Thomas caught sight of Miss Sterlington holding court with half a dozen suitors and felt his jaw tighten in another seemingly uncontrollable reaction.

He had come to London because it was reasonable to expect that a man in search of a wife would find one amid the young women who came for the entertainment season that coincided with the parliamentary session. Yet after a month in London, Thomas had yet to meet any young woman who could hold his interest for the length of an evening. He thought of Miss Sterlington and shook his head at the irony that the only debutante who drew his attention was one he could never have.

Thomas found a nearly empty corner where someone had, blessedly, opened one of the diamond-paned windows. He took the liberty of pushing it open a bit more to get some cooler air on his face; he would never go so far as to call London’s air
fresh
, but the outdoors was far better than the stuffiness of the ballroom. He looked toward a garden some distance away and felt a wave of melancholy as he took in the trees and walking path.

He missed Yorkshire, where he’d lived all his life and where his father and oldest brother were buried. He missed the moors and the cattle and the sheep of North Riding. He missed fishing in the River Wiske that ran through his families’ estate lands, walking through mud in his wearing boots, and eating apples right off the tree when they were in season. He missed his mother and his brother and his niece, Lizabeth, who was adjusting to the birth of her baby brother, the next Lord Fielding. And so help him, Thomas missed the simple country dances where attendees did not feel the singular pressure of having to find a marriage amid the crowd.

“Just one season,” his mother had begged two months ago, revealing a plan that had been some time in the making on her part. “I feel certain that once you commit yourself to your lands you shall never leave Yorkshire again.” He could not adequately relieve her fear on that count and therefore agreed to her wishes.

“Tell me it is not The Honourable Thomas Richards.” Recognition of the nasally voice behind him was instantaneous, and Thomas was smiling before he turned around to see a dandy of a fellow looking at him through a quizzing glass tied to his waistcoat with a black ribbon. “Pray, I don’t believe it!” the fop said with a pretty stomp of his green, square-toed shoe. He put one hand on his hip, lowered his glass, and looked at Thomas with growing astonishment. “Thomas Richards at
Almack’s
? In
London?
” He shook his head and closed his eyes while taking a dramatic breath that flared his nostrils. “No, no, you must be an imposter. The Thomas Richards I knew, bless him, would never make such an appearance. No, it would go against all he stood for, I am sure.”

Thomas laughed and put his hand out for his old schoolmate. Though they were different sorts of men, Thomas had counted Fenton as a great friend for many years. “I for one would be far more surprised if Viscount Fenton
weren’t
at Almack’s. In
London
,” Thomas countered in mimicked cadence. “The true question of the hour is why I have been in this city for nearly a month and I am just now seeing him.”

The two men shook hands, and Thomas was reminded through the power of his grip that, should Fenton choose to, he could lay Thomas flat in a trice. He’d done exactly that more times than Thomas cared to remember when they were suitemates at Oxford and trying to prove who was the stronger man, as young men often did in any number of competitive games.

“How are you, my friend?” Thomas asked, disposing of the jesting tone.

“I am very well,” Fenton said, his voice low and even now that he was not putting on a show. “Have you truly been in London a month?”

The Great Shelby Holmes by Elizabeth Eulberg
Rock and Roll Will Save Your Life by Steve Almond
Dead Set by Richard Kadrey
Swept Away by Melanie Matthews
For Always by Danielle Sibarium
Stuffed Bear Mystery by Gertrude Chandler Warner
Escaping: A Mafia Romance (The O'Keefe Family Collection #2) by Tuesday Embers, Mary E. Twomey
When Perfection Fails by Tyora Moody
Twin Tales by Jacqueline Wilson
Cyclops (The Margellos World Republic of Letters) by Marinkovic, Ranko
Our partner