Read A Hint of Rapture Online

A Hint of Rapture 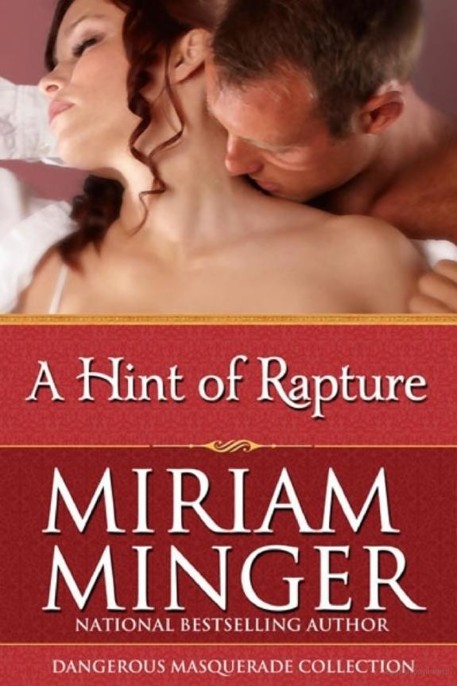 “Miriam Minger is a master storyteller who illustrates
the full gamut of emotions felt by her characters.

Emotions so strong that you are pulled into
the pages and into their lives.” – Inside Romance

A HINT OF RAPTURE

With the exception of quotes
used in reviews, this book may not be reproduced or used in whole or in part by
any means existing without written permission from the author.

Any references to historical events, real
people, or real locales are used fictitiously.

Other names, characters, places, and incidents are the product of the
author’s imagination, and any resemblance to actual events or locales or
persons, living or dead, is entirely coincidental.

Nae joy nor pleasure can she see;

For e'en and morn she cries, Alas!

A waeful day it was to me;

For there I lost my father dear,

My father dear and brethren three!

Their winding-sheet the bluidy clay,

Their graves are growing green to see;

And by them lies the dearest lad

That ever blest a woman's e'e!

A bluidy man I trow thou be;

For mony a heart thou hast made sair

That ne'er did wrang to thine or thee!"

"Maddie, wake up, wake up!" Glenis pleaded, rushing
toward the bed as fast as her old bones would carry her. "'Tis the
redcoats, hinny, come to burn the house! Oh, God, protect us!"

"What are ye saying, Glenis?" Madeleine
Fraser said drowsily, jarred from her sleep. Dazed, she sat up, her eyes adjusting
to the faint light in her room. It was near dawn, and the murky gray world
outside her window was blanketed in thick fog.

"Redcoats, Maddie, comin' up the road!"
Glenis exclaimed. "Angus Ramsay just brought the news. He near scared the
life from me, poundin' on the kitchen door as he did. He's gone now to wake the
villagers in Farraline." She tugged urgently at Madeleine's arm.
"Hurry, ye must get dressed and flee before they get here. They'll not
want the likes of me, a wrinkled old woman, but ye're young, lass, and as
pretty as they come. Oh, hurry, Maddie, for yer own sake!"

Madeleine did not hesitate. Fully awake now, she threw
back the coverlet and vaulted out of bed, wrenching her white nightdress over
her head. She shivered, her skin prickling with goosebumps. The early morning
air was still chill this time of year in the Highlands. She brushed by her
servant and ran across the room to the massive wardrobe.

She flung open one door and grabbed the first gown she
touched, a plain frock of blue muslin. She dressed quickly, donning first a
chemise and linen drawers, but rejecting her stays. There was no time. She took
a brief moment to fasten a light woolen shawl around her shoulders, then she
was flying out the door with Glenis at her heels.

"I winna need them," Madeleine said over her
shoulder. She crossed the carpeted hallway to the narrow side stairs near her
room and took them two at a time, her hands braced against the whitewashed
walls.

"What do ye mean, ye winna need them?" Glenis
called shrilly from the top of the stairs.

Madeleine spun around and looked up at her terrified
servant. Her deep azure eyes shone with fierce determination. "I'm not
leaving my home, Glenis. The devils will have to burn Mhor Manor around
me."

Ignoring Glenis's shocked expression and sputtered
protests, Madeleine hurried through the drawing room to the main hallway. She
could hear raised male voices growing louder and the nervous neighing of
horses. With her heart hammering in her chest she threw open the front door and
stepped outside.

Raw fear cut through her, and her knees felt suddenly
weak. There were at least two hundred English soldiers advancing along the dirt
drive toward the manor house, some marching, some on horseback. Many of them
held smoking torches, the bright orange flames like beacons in the swirling
fog.

She took a step forward, planting her feet on the damp
flagstones leading to the drive. She pretended not to hear the wolfish whistles
and lewd remarks, and she overlooked the leering grins. Her eyes were fixed on
the silver-haired officer riding at the head of his men. She guessed he was a
colonel from the abundant gold lace which adorned his scarlet coat. Clasping
her hands tightly to keep them from shaking, she waited until he drew up on the
reins and stopped just twenty feet from the house.

"I know why ye've come, and I ask ye to leave us
in peace!" she stated loudly, but her words were drowned out by the
raucous din. Quelling her apprehension, she tried once more, and again she was
shouted down. To her surprise, the commanding officer held up his hand, and the
rowdy soldiers gradually fell silent.

Madeleine drew a deep breath, her gaze meeting his
narrowed one. "I know why ye're here, colonel, and 'tis a dirty business
ye're about," she said in a clear, strong voice. "I appeal to yer sense
of decency and honor, as a gentleman. Spare my home, and the homes in the
surrounding villages. Most of our men are gone." She paused, swallowing
against the sudden lump in her throat. "We're mainly women and children
here. We canna fight ye, so we ask for yer mercy."

"Let me have at her," a strapping soldier
called out, laughing coarsely. "When I'm between her legs, she'll not cry
out for mercy. She'll cry out for more!"

"Aye, and I'll have her next!" another
shouted eagerly, shoving his way to the front. "I've never had a wench so
fine. Just look at 'er, with that wild mane o' chestnut curls and those ruby
lips!"

Madeleine stepped back as the soldiers shook their
torches threateningly. The air resounded with crude laughter and obscenities until
the officer commanded their grudging silence once again.

The colonel studied her sharply, his expression grim.
"I cannot do that, young lady. I have orders from the duke of Cumberland
that must be followed—"

"Orders!" she blurted, cutting him off. The
mere mention of Butcher Cumberland filled her with rage she could barely
control. "We've already lost our cattle herds, our sheep and our goats, to
yer duke's orders, driven off for slaughter to feed the lot of ye English. And
our newly sown crops, our food for next winter," she emphasized,
"were ruined when the soldiers drove the animals over the fields. We've
only our homes left to shelter us. If ye burn us out, we'll have nothing
left!"

"My orders are plain and cannot be altered,"
the officer insisted, shaking his head. "Now, if you have servants in the
house, you'd best see that they stand clear—"

"Surely ye have a good wife at home, sir,"
Madeleine cried out desperately, trying another tack. "Children of yer
own, aye, and grandchildren!" Emboldened, she swept her defiant gaze
around the tight line of soldiers. "All of ye! Have ye not wives
yerselves—sweethearts, children? What if 'twas yer loved ones in this miserable
plight? Would ye not wish mercy to be shown?"

The hardened faces of the soldiers, faces that had
grown immune to death and suffering, stared at her with little pity or remorse.
Fighting a wave of despair, Madeleine turned back to the colonel. "Please,
sir, I beg of ye. Dinna let yer men loose upon us. If ye do, I swear 'twill
haunt ye to yer grave."

The officer looked down for a long moment, his fingers
worrying at the reins. When he glanced at her again, Madeleine breathed an
inner sigh of relief at the flicker of compassion she saw in his eyes.

"Very well, young lady. Your home and those in the
surrounding villages will be spared," he said, ignoring his men's
disgruntled mutterings. "Though I cannot promise you another officer will
do the same in the future."

"Ye have my thanks, sir," Madeleine said.

"You might wish to save your gratitude," he
replied cryptically. "There is one order I cannot change." He turned
abruptly in his saddle and addressed his soldiers. "Strip everything of
value from the house!"

A great cheer went up from the soldiers, and the
colonel had to shout above them. "Hear me well, lads. If any of you should
take it in your heads to harm this lady or her servants, I'll hang you this
very day. Now get on with it. We have the entire valley to cover before
sunset."

"No!" Madeleine gasped in disbelief as the
soldiers dropped their torches and rushed toward the house. Fighting and
kicking, she was swept into the house by the human tide until a burly soldier
plucked her to safety and deposited her in a dining room chair.

Madeleine tried to stand up, but the soldier held her
firmly by the shoulders, forcing her to remain seated. All she could do was
stare wide-eyed while the redcoats swarmed into the adjoining rooms and up the
center flight of stairs, leaving a path of wanton destruction in their wake.

"No, keep yer filthy hands from that vase!"
she heard Glenis scream from the drawing room. There was a crash of china, then
a loud wail as the old woman was carried into the dining room and dumped
unceremoniously in another chair. Glenis began to cry piteously.

Madeleine had no words of comfort to offer her. She
watched in impotent fury as her mother's sterling silver was snatched from its
cabinet, polished furniture was hacked to bits, portraits were slashed and gilt
frames were carried off, rugs were soiled by muddy boot prints, and family
heirlooms were stolen. She remained silent through it all, unshed tears
brimming in her eyes, while her captor's callused fingers stroked her neck.

Ten minutes later the rampage was over. The soldier
released her, but not before he pulled her head back roughly and kissed her
full on the lips. His fetid breath made her gag, and she wrenched her mouth
away.