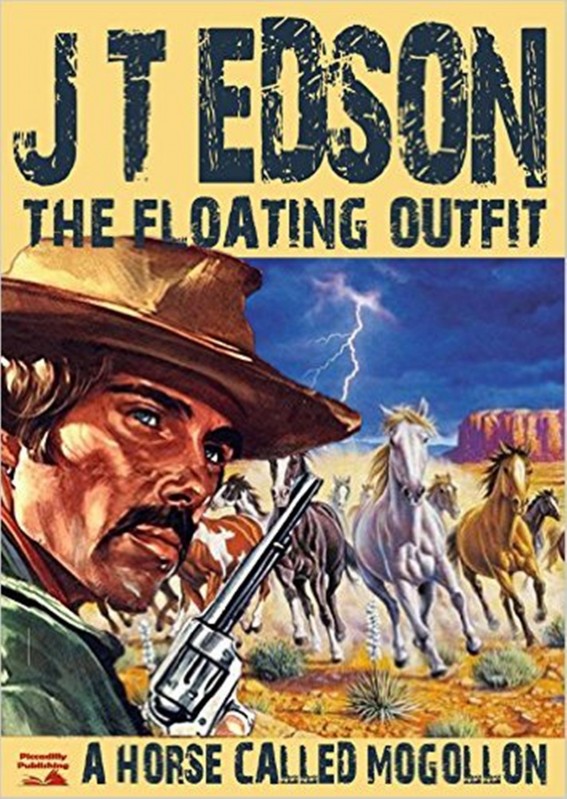 When Colin Farquharson refused
to sell the horse called Mogollon to Beatrice, Vicomtesse de
Brioude, her husband swore to make him change his mind. To help him
enforce his will upon the Scot, the Vicomte had a bunch of hired
killers and a dozen cavalrymen commanded by an ambitious
lieutenant
besotted by the voluptuous Vicomtesse. Against them, the
Scot had ten Mexican mesteneros and three Texas cowhands not yet
twenty years of age. They were Ole Devil Hardin’s
newly-formed
floating outfit. Mark Counter, a handsome blond giant with
the strength of a Hercules and a brace of real fast guns. The
Ysabel Kid, baby-faced but deadly expert in the use of a Winchester
rifle or a bowie knife. And their leader. Small, insignificant in
appearance, he looked more like the horse-wrangler than the segundo
of the biggest ranch in
Texas. His name was Dusty Fog

Although the Vicomte did not know it, taking
the horse called Mogollon would be far from as easy as he
imagined. 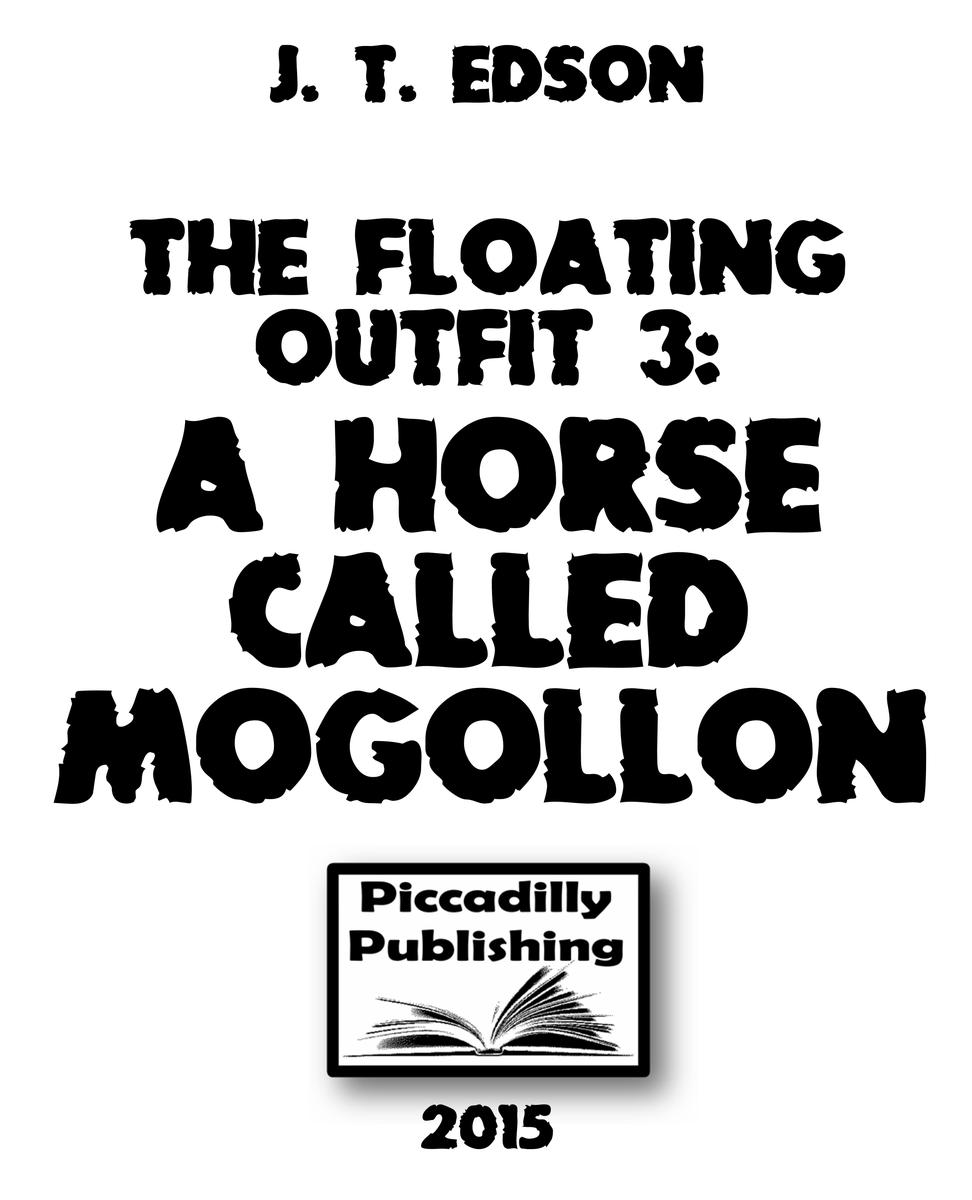 This is a
Piccadilly Publishing Book

Published by
Arrangement with the Author’s Agent.

For Pat Baco
n. Keep selling my books, Pat,
I’m much too idle to go to work.

‘
Hold
it!’
Jeanie Schell whispered urgently as her dainty dun gelding
tossed its head back, snuffled the breeze and cocked its ears
towards the top of the slope up which her party was riding.
‘There’s hosses over the rim.’

Immediately her two companions
reined their mounts to a stop. Dusty Fog and Colin Farquharson had
known the girl for long enough to be satisfied that she could read
her gelding
’s
reactions correctly.

Small, petite, her reddish-brown
hair a short, curly halo about an attractively-tanned, pretty face,
Jeanie had worked with horses almost all her life and knew their
moods. Not yet twenty, she had a well-formed body fast maturing to
womanhood. A low-crowned, wide-brimmed
gray Stetson perched on the back of
her head. She wore a dark green shirt tucked into Levi’s pants, the
turned-back cuffs of which hung outside her high-heeled riding
boots.

Like the girl, Dusty Fog had
been born and raised in Texas: although they came from different
backgrounds.
His clan owned most of the land in Rio Hondo County.
Jeanie’s late father had been a mustanger, a catcher and breaker of
wild horses, and her home wherever the family’s wagon came to a
halt.

Barely six inches taller than
Jeanie
’s five
foot height, Dusty had a width to his shoulders that, taken with
his slender waist, hinted at an exceptional muscular development.
Despite their being expensive and well tailored, he made his
clothes look like somebody’s hand-me-downs in a way which took most
of the emphasis from his physique and made him appear almost
insignificant. Not even the excellent design and workmanship of his
gun belt, with twin bone-handled 1860 Army Colts in the cross-draw
holsters, tended to render him more impressive at first
glance.

If an observer chanced to
examine him closer, certain facts grew into focus. There was much
more to the short,
dusty-blond cowhand than appeared on the surface. His
magnificent seventeen-hand paint stallion gave the first clue. Only
a man of considerable equestrian ability could hope to remain on
its back and control it and he sat the low-horned, double-girthed
range saddle with an almost effortless ease. Tilted at the
traditional ‘jack-deuce’ angle over his right eye, his black
Texas-style Stetson threw a shadow across a handsome face with
strength, intelligence and power in its lines.

Maybe Dusty Fog presented a
first impression of being a small nonentity, but few people in
Texas regarded him in that light. During and since the recently
ended War Betwe
en the States, he had achieved an almost legendary fame. At
a young eighteen, he had worn the triple collar bars of a captain
in the Confederate States’ Army. Leading the Texas Light Cavalry’s
Company ‘C’, he had played havoc with the Yankees in Arkansas and
built a reputation equal to Dixie’s other two daring military
raiders, Turner Ashby and John Singleton Mosby.
i
Veterans of the Arkansas campaign
boasted of his lightning fast draw and deadly accurate shooting
with the matched Colts, or about his uncanny skill when fighting
with his bare hands. It was whispered that he had prevented an
attempt by Unionist fanatics to stir up an Indian war which would
have decimated much of Texas;
ii
and had assisted Belle Boyd, the
Rebel Spy, on two of her missions.
iii
After the War had ended, he had hoped
to resume his interrupted career. Fate had made him segundo of the
great OD Connected ranch
iv
and, again according
to rumor, another turn of its wheel had sent him into Mexico on an
assignment of considerable importance to the peace of the United
States.
v
Having brought it
off successfully, he and two members of his ranch’s crew had come
to help the Schell family gather horses to rebuild the OD
Connected’s
remuda.

Dusty and Jeanie looked part of
the scenery as they sat their horses on the slope about two miles
north of the Guadalupe River
’s headwaters in Kerr County, Texas. The same did
not apply to the third member of the party. Despite having acquired
the high honor of being regarded as a .44 caliber man,
vi
Colin Farquharson’s appearance seemed
better suited to a Scottish Highland deer-forest.

Something over six foot in
height, Colin had a muscular, powerful physique that went well with
his ruggedly handsome features. A round, brimless bonnet rode at a
jaunty angle on his brown hair, with an eagle
’s feather angled backwards from
under the silver insignia of the Clan Farquharson at its left side.
The tight-rolled blue bandana trailed its ends over a conventional,
open-necked gray shirt such as might have been worn by any Texas
cowhand. About his waist was strapped a Western-pattern gun belt,
with an ivory-handled Dragon Colt butt forwards at the right side
in a low cavalry twist draw holster. In a metal-tipped leather
sheath at the left of the belt hung a long Scottish dirk with a
thistle-shaped, finely carved wooden hilt and a double-edged,
spear-pointed blade.

So far, apart from his bonnet,
Colin conformed with the dictates of local fashion. Nothing else of
his attire did. Under the
gun belt, extending to just above his bare knees,
was a Farquharson-tartan kilt. Thick woolen stockings of the same
black, dark-blue, deep green, check pattern, interspersed with red
and yellow lines, covered his thick calves and disappeared into
low-heeled, untanned boots. The hilt of a small, but deadly,
sgian-dubh
knife rose from the
outside of the right stocking’s top.

While determined to remain and
make Texas his permanent home, Colin still clung to some of the
Highlander
’s
traditional style of dress. He possessed sufficient physical
strength and all-round fighting ability to make sure that his right
to do so would be respected.

‘
Could
be Lon coming back, Jeanie,’ Dusty commented. ‘Best make sure,
though.’

Dismounting, they allowed their
horses
’ reins
to dangle free and advanced up the slope on foot. Cautiously
raising his head to peer over the rim, Colin pursed his
trim-mustached lips in a silent whistle of admiration at what he
saw in the valley beyond it. Dusty’s insistence on making sure of
what awaited them had paid off and Colin considered it
worthwhile.

About forty horses were grazing
in the valley: mares, foals, yearlings and maybe a dozen young
stallions.
All looked to be finely bred and in the peak of condition.
Over the past weeks, Colin had seen many similar sights. The years
of the War had allowed the bands of wild horses to build up their
numbers, just as it had permitted the longhorn cattle to increase
practically unchecked by human agencies. Some of the
manadas—
a Spanish word adapted to mean a bunch of mustangs—had been
larger in number than this one; but none had exceeded it in the
excellence of its members’ conformation, especially amongst the
younger animals.

‘
Colin!’ Jeanie breathed, her left hand closing on his
bulging right bicep and tightening as excitement put a vibrant
thrill into her words. ‘That’s Mogollon and his band!’

Instantly the
Scot
’s
interest increased. Ever since throwing in his lot with the Schell
family, he had been hearing about the horse called Mogollon. The
Clan Farquharson was noted for their knowledge of matters
equestrian, but a man did not need to be an expert to recognize
Mogollon. Even amongst the well-shaped members of its
manada,
the
manadero
stood out from all
the others. Not even the largest of the immature stallions still
tolerated by their sire came up to Mogollon in size.

The master stallion stood a full
seventeen hands. Large at the shoe, concave in the sole, open at
the heel, provided with a big, flexible frog, each hoof narrowed a
little to the coronet. They were feet ideally suited to withstand
the poundings and strains thrown upon them by carrying the
manadero’s
mighty body. Above
the coronets, the pasterns angled correctly, being neither too
sloping nor too upright. Short in proportion to the forearms, the
cannon bones gave the impression of a razor-like flatness. Long,
not too horizontal forearms joined powerful, sloping shoulders
which made the withers lie farther rearwards than the elbows. While
they did not ‘come out of the same hole’, as mustangers expressed
it, the front legs were close enough together to avoid giving a
rolling, paddling
vii
gait.

Short a
nd strong of back, with the ribcage
well sprung to give plenty of room for heart, lungs and other vital
organs, it carried smoothly into long and slightly-sloping hips.
Designed as the major portions of the propulsion mechanism, the
stifles had a muscular development that told of enormous power. Set
high on the body, the long tail arched and flowed proudly as
Mogollon moved.