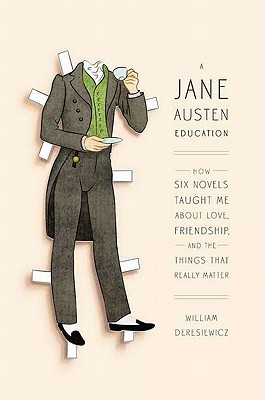 Table of Contents
Title Page
Copyright Page
Dedication
CHAPTER 1 - emma everyday matters
CHAPTER 2 - pride and prejudice growing up
CHAPTER 3 - northanger abbey learning to learn
CHAPTER 4 - mansfield park being good
CHAPTER 5 - persuasion true friends
CHAPTER 6 - sense and sensibility falling in love
CHAPTER 7 - the end of the story
Acknowledgements
also by william deresiewicz
Jane Austen and the Romantic Poets
THE PENGUIN PRESS
Published by the Penguin Group
Penguin Group (USA) Inc., 375 Hudson Street, New York, New York 10014, U.S.A. • Penguin Group (Canada), 90 Eglinton Avenue East, Suite 700, Toronto, Ontario, Canada M4P 2Y3 (a division of Pearson Penguin Canada Inc.) • Penguin Books Ltd, 80 Strand, London WC2R 0RL, England • Penguin Ireland, 25 St. Stephen’s Green, Dublin 2, Ireland (a division of Penguin Books Ltd) • Penguin Books Australia Ltd, 250 Camberwell Road, Camberwell, Victoria 3124, Australia (a division of Pearson Australia Group Pty Ltd) • Penguin Books India Pvt Ltd, 11 Community Centre, Panchsheel Park, New Delhi – 110 017, India • Penguin Group (NZ), 67 Apollo Drive, Rosedale, Auckland 0632, New Zealand (a division of Pearson New Zealand Ltd) • Penguin Books (South Africa) (Pty) Ltd, 24 Sturdee Avenue, Rosebank, Johannesburg 2196, South Africa
Penguin Books Ltd, Registered Offices: 80 Strand, London WC2R 0RL, England
First published in 2011 by The Penguin Press, a member of Penguin Group (USA) Inc.
Copyright © William Deresiewicz, 2011
All rights reserved
LIBRARY OF CONGRESS CATALOGING IN PUBLICATION DATA
Deresiewicz, William.
A Jane Austen education : how six novels taught me about love, friendship, and the things that really matter / William Deresiewicz.
p. cm.
eISBN : 978-1-101-51417-7
1
. Austen, Jane, 1775-1817—Appreciation. I. Title.
PR4037.D
823’.7—dc22
Without limiting the rights under copyright reserved above, no part of this publication may be reproduced, stored in or introduced into a retrieval system, or transmitted, in any form or by any means (electronic, mechanical, photocopying, recording or otherwise), without the prior written permission of both the copyright owner and the above publisher of this book.
The scanning, uploading, and distribution of this book via the Internet or via any other means without the permission of the publisher is illegal and punishable by law. Please purchase only authorized electronic editions and do not participate in or encourage electronic piracy of copyrightable materials. Your support of the author’s rights is appreciated.
Penguin is committed to publishing works of quality and integrity. In that spirit, we are proud to offer this book to our readers; however, the story, the experiences, and the words are the author’s alone.

My second year in graduate school, I signed up for a class called Studies in the Novel, less because I knew anything about it than because it sounded like a good fit. Our first two books were
Madame Bovary,
the novel that raised the art of fiction to a new level of cultural esteem, and
The Ambassadors,
Henry James’s most honored masterpiece. So far, my need to study prestigious literature was being satisfied.
Then came
Emma.
I had heard some scattered talk, over the years, about its supposed greatness—one of the best novels in the language, more complex than anything in Joyce or Proust—but at first, my prejudices against Jane Austen were only confirmed. Everything was so unbearably banal. The story seemed to consist of nothing more than a lot of chitchat among a bunch of commonplace characters in a country village. No grand events, no great issues, and, inexplicably for a writer of romance novels, not even any passion.
Emma, it turned out, was Emma Woodhouse, “handsome, clever, and rich,” who lived with her feeble, foolish old father on their family estate of Hartfield. Her life was impossibly narrow. Her mother had died when she was a baby; her sister, Isabella, lived in London; and the governess who had raised her had just gotten married. Mr. Woodhouse himself was too much of a hypochondriac to even venture off the estate, and his best friends, who were forever dropping by, consisted of a sad, silly spinster named Miss Bates and her elderly mother, the widow of the old clergyman.
This was a pretty unpromising bunch of people to begin with, and then all they seemed to do was sit around and
talk
: about who was sick, who had had a card party the night before, who had said what to whom. Mr. Woodhouse’s idea of a big time was taking a stroll around the garden. Reading the mail was the highlight of everybody’s day, and a shopping trip to Highbury, the little village near Hartfield where the Bateses lived—and where there seemed to be a total of one store—counted for the heroine as a major event.