Read A Job to Kill For Online

A Job to Kill For 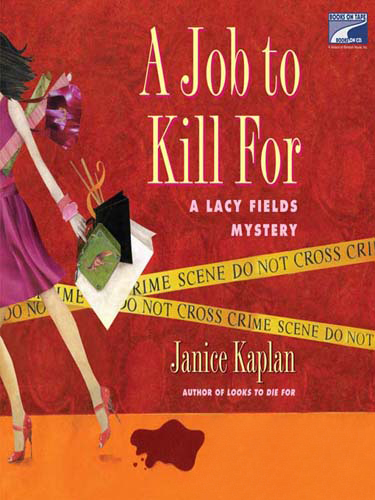 Looks to Die For

The Men I Didn’t Marry 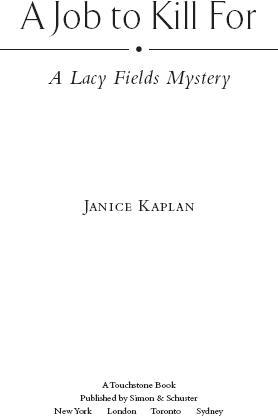 All rights reserved, including the right to reproduce this book or portions thereof in any form whatsoever. For information address Touchstone Subsidiary Rights Department, 1230 Avenue of the Americas, New York, NY 10020.

A Job to Kill For

I
f I’d known Cassie Crawford would die, I might not have joked about wanting to kill her.

I’d been at her brand new three-million-dollar penthouse overlooking Los Angeles for almost an hour this morning, making sure all the details were perfect. Fresh calla lilies in the Steuben vase. Stainless steel Italian cappuccino machine properly filled with organic, shade-grown Sumatran ground beans. Electronic shades opened at the right angle to let in the light but not the UV rays. At 12:17, Cassie strode in, wearing a sheer white blouse, white jeans, and strappy gold high-heeled sandals, looking even blonder and slimmer than the last time I’d seen her. Our appointment stood at noon, but given the commission she was paying, seventeen minutes late counted as on-time performance.

“Is everything done?” Cassie asked anxiously. Apparently we weren’t going to bother with
Hello, How are you,
or even
Nice to see you again.
Cassie took off her Chanel sunglasses but didn’t even glance up at the hand-made Swarovski crystal chandelier that sparkled overhead, sending gleams of sunlight flickering across the foyer.

“Thank God,” Cassie said. She made a quick movement of hand against chest, and I thought at first she was crossing herself. But instead she religiously adjusted the seven-carat diamond pendant hanging just above her cleavage. As she patted it into place, the necklace clinked against her wedding band, so heavy with sapphires and diamonds that Cassie risked carpal-tunnel syndrome every time she lifted a well-manicured finger. Of course, now that she’d married Roger Crawford, she never needed to lift a finger again.

Without another word, Cassie pivoted on the four-inch heels of her Jimmy Choos and headed to the bedroom. I followed, traipsing comfortably if not quite as elegantly in my Lilly Pulitzer pink flats. If the ability to stride seamlessly on stilettos was required before you married a billionaire, I’d obviously never be so blessed.

Or maybe cursed. Despite the perfect outward appearance, Cassie seemed to be in a controlled panic as she checked out the penthouse for the first time. Her eyes were bloodshot, and she raced around the room snapping her head like a Perdue chicken. She opened and closed the storage drawers I’d cleverly tucked behind floor-to-ceiling lacquered doors, then moved quickly on.

“Do you think Roger will like the bed?” she asked, sitting tentatively on the edge of the fifteen-thousand-dollar Hypnos mattress I’d had flown in from London.

“It’s the same one Queen Elizabeth sleeps on,” I said, as if that settled it. Though who knew where Prince Philip slept.

“And the sheets?” Cassie asked, running her fingers over the linens that were so soft they made 600-thread-count sateen seem like sandpaper. “Frette?”

“Definitely not,” I said firmly. “Frette is so last year. They’re now used in some”—I lowered my voice—“hotels.”

Cassie looked briefly uncertain, but then nodded. At age twenty-eight (according to the gossip columns), she couldn’t know everything. I couldn’t either—but being older meant I knew how to sound like I did.

She sighed. “Well, I’m counting on you to get everything right. Isn’t it funny? Until I married Roger, I lived in a furnished sublet in Studio City. This is the first place I’ve ever decorated myself.”

She’d decorated this place herself? “You did a nice job,” I said encouragingly. I’d been in the business long enough to know that the person signing the check got to take credit for the success. Cassie had turned up as a new client not long ago, calling me out of the blue and asking if I could furnish the just-bought penthouse from top to bottom while she and Roger cavorted on a three-week trip to Hong Kong and Tokyo.

“It’ll be tricky with such a quick turnaround,” I’d said.

With any luck, the combination of Cassie’s bank account and my eye for style would land both of us in
Architectural Digest.
However difficult she turned out to be, I’d cope.

Cassie and I had met twice about the design, but when I tried to show her samples and discuss the virtues of Carrera counters versus granite, her eyes glazed over.

“Whatever you think Roger will like. That’s the only thing that matters.”

“Roger has to be happy,” Cassie said firmly. “Pleasing him is my only job at the moment.” Apparently, the calendar had flicked back to 1950 when I wasn’t looking.

I’d never met Roger Crawford and Cassie happened to be his new (or at least newest) wife. But when it came to decorating, I didn’t really need her advice on how to keep him satisfied. I just turned the penthouse into a marble-and-brass version of jewel-strewn Cassie: something to help him feel sexy and young, and make it clear to anyone around just how successful he must be.

I knew Roger would admire the result. But now Cassie continued dashing around with an anxious expression. She came to a dead halt in the dining room, glancing at the gleaming onyx table and the chairs covered with zebra skin.

“The fabric’s fake,” I assured her. “A combination of silk, cashmere, and linen. Probably more expensive than importing the real thing from Africa, but ecologically better. Everything else in the room is so minimalist, I thought we could have some fun.”

She marched into the second bedroom suite and began opening and closing drawers. She peeked into every possible nook or cranny, as if hunting for lost keys.

“Are you looking for something in particular?” I asked as she walked out of the walk-in closet. I’d lined two of the walls with mirrors, and Cassie’s image reflected over and over, repeated forever. Her eyes flitted worriedly, but not a single line popped out on her forehead. Either she was genetically incapable of furrowing her brow, or she’d already had her first Botox injections.

“Doesn’t feel right?” To my eye, the place looked darn-near perfect, but my client had to be satisfied. If she wanted a Prince poster instead of the Picasso, I’d dash out to find it a fabulous frame. “Maybe you don’t like the pale green color on the wall,” I said, trying to be helpful. “To me, it feels peaceful, but if you want something brighter, we could repaint it in daffodil. Or magnolia.”

“No, it’s not that. I can’t really explain it.” She shook her head. “Something’s got me spooked. Isn’t it weird? I feel like a little kid at Halloween going into a haunted house.”

From what I’d read about him, Roger Crawford had variously owned a ranch in Montana, a waterfront casa in Costa Rica, a townhouse across from Buckingham Palace, and a sprawling estate in Beverly Hills. I didn’t know which of those had gone to previous wives and which were now “home” to Cassie.