Read A Killer in Kailash: Adventures of Feluda Online

A Killer in Kailash: Adventures of Feluda 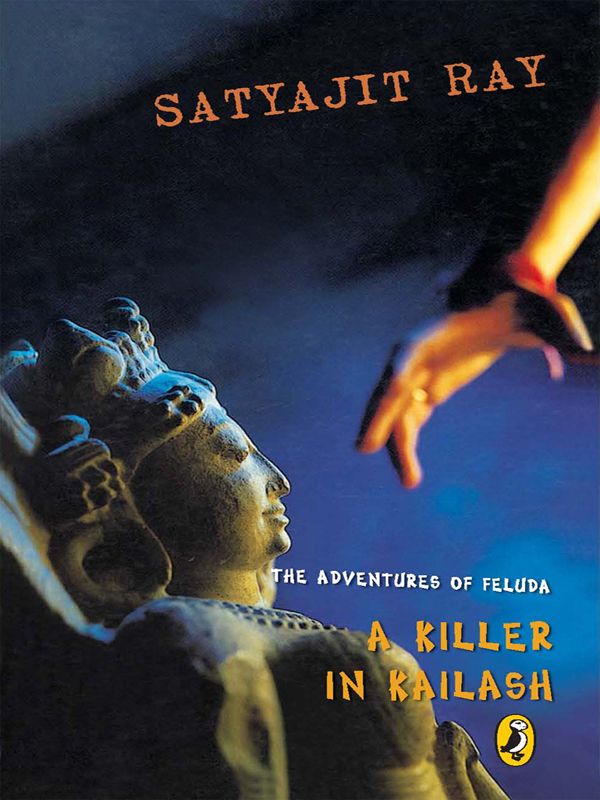 T
HE
A
DVENTURES
OF
F
ELUDA

A KILLER IN KAILASH

Translated from the Bengali by Gopa Majumdar

PUFFIN BOOKS
THE ADVENTURES OF FELUDA
A KILLER IN KAILASH

Satyajit Ray (1921-1992) was one of the greatest filmmakers of his time, renowned for films like
Pather Panchali, Charulata, Aranyer Din Ratri
and
Ghare Baire
. He was awarded the Oscar for Lifetime Achievement by the Academy of Motion Picture Arts and Science in 1992, and in the same year, was also honoured with the Bharat Ratna.

Ray was also a writer of repute, and his short stories, novellas, poems and articles, written in Bengali, have been immensely popular ever since they first began to appear in the children’s magazine
Sandesh
in 1961. Among his most famous creations are the master sleuth Feluda and the scientist Professor Shonku.

Gopa Majumdar has translated several works from Bengali to English, the most notable of these being Ashapurna Debi’s
Subarnalata
and Bibhutibhushan Bandyopadhyay’s
Aparajito
, for which she won the Sahitya Akademi Award in 2001. She has translated several volumes of Satyajit Ray’s short stories and all of the Feluda stories for Penguin Books India. She is currently translating Ray’s Professor Shonku stories, which are forthcoming in Puffin.

A STOLEN YAKSHI HEAD. A PLANE CRASH. A VANDAL ON THE LOOSE IN ELLORA
…

An American buys a yakshi head stolen from a Bhubaneshwar temple and subsequently dies in a plane crash. Trying to prevent the smuggling of priceless sculptures out of India, Feluda, Topshe and Jatayu follow the lead of the yakshi to the Ellora caves. But the appearance of a Bollywood film crew and a sudden murder complicate matters, and Feluda must draw on all his investigative skills to solve the case before the vandal strikes again.

Feluda's twelve greatest adventures are now available in special Puffin editions. This is the fifth book in the series.

Translated from the Bengali by Gopa Majumdar

I
t was the middle of June. I had finished my school final exams and was waiting for the results to come out. Feluda and I were supposed to have gone to a film today, but ten minutes before we were to leave, it began raining so heavily that we had to drop the idea. I was sitting in our living room, immersed in a Tintin comic (
Tintin in Tibet
). Feluda and I were both very fond of these comics which had mystery, adventure, and humour, all in full measure. I already had three of these. This one was new. I had promised to pass it on to Feluda when I finished it. Feluda was stretched out on the divan, reading a book called
Chariots of the Gods
. He had nearly finished it.

After a while, he shut the book, placed it on his chest, and lay still, staring at the whirring ceiling fan. Then he said, ‘Do you know how many stone blocks there are in the pyramid of Giza? Two hundred thousand.’

Why was he suddenly interested in pyramids? He went on, ‘Each block weighs nearly fifteen tonnes. From what is known of ancient engineering, the Egyptians could not have polished to perfection and placed together more than ten blocks everyday. Besides, the stone it's made of had to be brought from the other side of the Nile. A rough calculation shows that it must have taken them at least six hundred years to build that one single pyramid.’

‘Is that what your book says?’

‘Yes, but that isn't all. This book mentions many other wonders that cannot be explained by archaeologists and historians. Take our own country, for instance. There is an iron pillar at the Qutab Minar in Delhi. It is two thousand years old, but it hasn’t rusted. No one knows why. Have you heard of Easter Island? It's a small island in the South Pacific Ocean. There are huge rocks facing the sea, on which human faces were carved thousands of years ago. These rocks were dragged from the middle of the island, taken to its edge, and arranged in such a way that they were visible from the sea. Each weighs almost fifty tonnes. Who did this? How did the ancient tribal people get hold of adequate technology to do this? They didn't have things like lorries, tractors, cranes, or bulldozers.’

Feluda stopped, then sat up and lit a Charminar. The book had clearly stirred him in a big way. ‘In Peru,’ he went on, ‘there is an area which has geometric patterns drawn on the ground. Everyone knows about these patterns, they are visible from the air, but no one can tell when and how they came to be there. It is such a big mystery that scientists do not often talk about it.’

‘Has the author of your book talked about it?’

‘Oh yes, and he's come up with a very interesting theory. According to him, creatures from a different planet came to earth more than twenty-five thousand years ago. Their technological expertise was much higher than man's. They shared their knowledge with humans, and built structures like the pyramids—which, one must admit, modern man has not been able to match despite all his technical know-how. It is only a theory, mind you, and of course it need not necessarily be true. But it makes you think, doesn't it? The weapons described in our Mahabharata bear resemblances to atomic weapons. So maybe …’

‘… The battle of Kurukshetra was fought by creatures from another planet?’

Feluda opened his mouth to reply, but was interrupted. Someone had braved the rain and arrived at our door, pressing the bell three times in a row. I ran and opened it. Uncle Sidhu rushed in, together with sprays of water. Then he shook his umbrella and shut it, sending more droplets flying everywhere.

Uncle Sidhu was not really a relation. He and my father used to be neighbours many years ago. Since my father treated him like an elder brother, we called him uncle.

‘What a miserable day get me a cup of tea quick the best you've got,’ he said in one breath. I ran back inside, woke Srinath and told him to make three cups of tea. When I returned to the living room, Uncle Sidhu was seated on a sofa, frowning darkly and staring at a porcelain ashtray.

‘Why didn't you take a rickshaw? In this weather, really, you shouldn't have—’ Feluda began.

‘People get murdered everyday. Do you know there's a different type of murder that's much worse?’ Uncle Sidhu asked, as if Feluda hadn’t spoken at all. We remained silent, knowing that he was going to answer his own question.

‘I think most people would agree that our present downfall notwithstanding, we have a past of which every Indian can be justly proud,’ Uncle Sidhu went on. ‘And, today, what do we see of this glorious past? Isn't it our art, chiefly paintings and sculptures? Tell me, Felu, isn't that right?’

‘The best examples of these—particularly sculptures—are to be found on the walls of old temples, right?’

Uncle Sidhu appeared to know about most things in life, but his knowledge of art was probably the deepest, for two out of his three bookcases were full of books on Indian art. But what was all this about a murder?

He stopped for a minute to light a cheroot. Then he coughed twice, filling the whole room with smoke, and continued, ‘Several rulers in the past destroyed many of our temples. Kalapahar alone was responsible for the destruction of dozens of temples in Bengal. You knew that, didn't you? But did you know that a new Kalapahar has emerged today? I mean, now, in 1973?’

‘Are you talking of people stealing statues from temples to sell them abroad?’ Feluda asked.

‘Exactly!’ Uncle Sidhu almost shouted in excitement. ‘Can you imagine what a huge crime it is? And it's not even done in the name of religion, it's just plain commerce. Our own art, our own heritage is making its way to wealthy Americans, but it's being done so cleverly that it's impossible to catch anyone. Do you know what I saw today? The head of a yakshi from the Raja-Rani temple in Bhubaneshwar. It was with an American tourist in the Grand Hotel.’

I had been to Bhubaneshwar when I was a child. My father had shown me the Raja-Rani temple. It was made of terracotta and its walls were covered by beautiful statues and carvings.

Uncle Sidhu continued with his story. ‘I had a few old Rajput paintings which I had bought in Varanasi in 1934. I took those to Nagarmal to sell. I have known him for years. He has a shop in the Grand Hotel arcade. Just as I was placing my paintings on the counter, this American arrived. It seemed he had bought a few things from Nagarmal before. In his hand was something wrapped in a newspaper. It seemed heavy. Then he unwrapped it, and—oh God!—my heart jumped into my mouth. It was the head of a yakshi, made of red stone. I had seen it before, more than once. But I had seen the whole body. Now the head had been severed.

‘Nagarmal didn't know where it had come from, but could tell that it was genuine, not a fake. The American said he had paid two thousand dollars for it. If you added two more zeros after it, I said to myself, even then you couldn't say it was the right value. Anyway, that man went up to his room. I was so amazed that I didn't even ask him who had sold it to him. I rushed back home and consulted a few of my books just to make sure. Now I am absolutely positive it was from a statue on the wall of Raja-Rani. I don't know how it was done—possibly by bribing the chowkidar at night. Anything is possible these days. I have written to the Bhubaneshwar archaeological department and sent it by express delivery, but what good is that going to do? The damage is already done!’

Rescued: COMPLETE by Alex Dawson
The Guide to Classic Recorded Jazz by Tom Piazza
covencraft 02.5 - carnival moon by margarita gakis
The Crazy Dentist and Other Naughty Stories for Good Boys and Girls by Christopher Milne
Blood Craft: The Shadow Sorceress Book Two by Sheehan, Bilinda
When Everything Changed by Wolfe, Edward M
Secrets of a Side Bitch by Watkins, Jessica
Ariadne in the Grotesque Labyrinth (Catalan Literature) by Espriu, Salvador
Bad Girls by Rebecca Chance
Burning (Brotherhood of the Blade Trilogy #1) by Paludan, Eve
Our partner