Read A Killing in Antiques Online

A Killing in Antiques 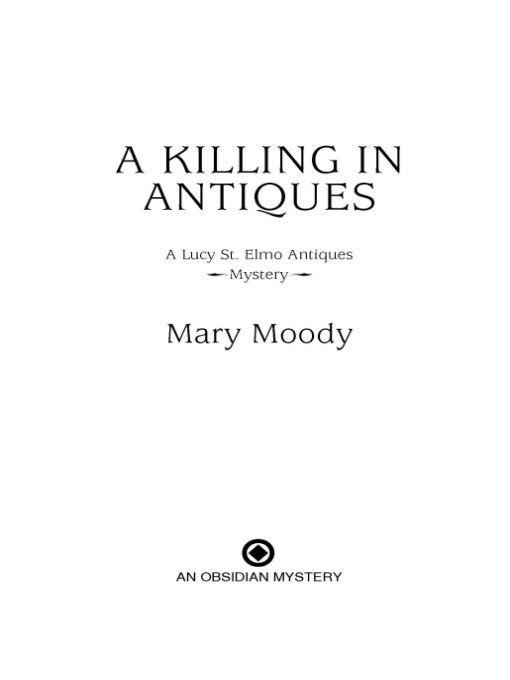 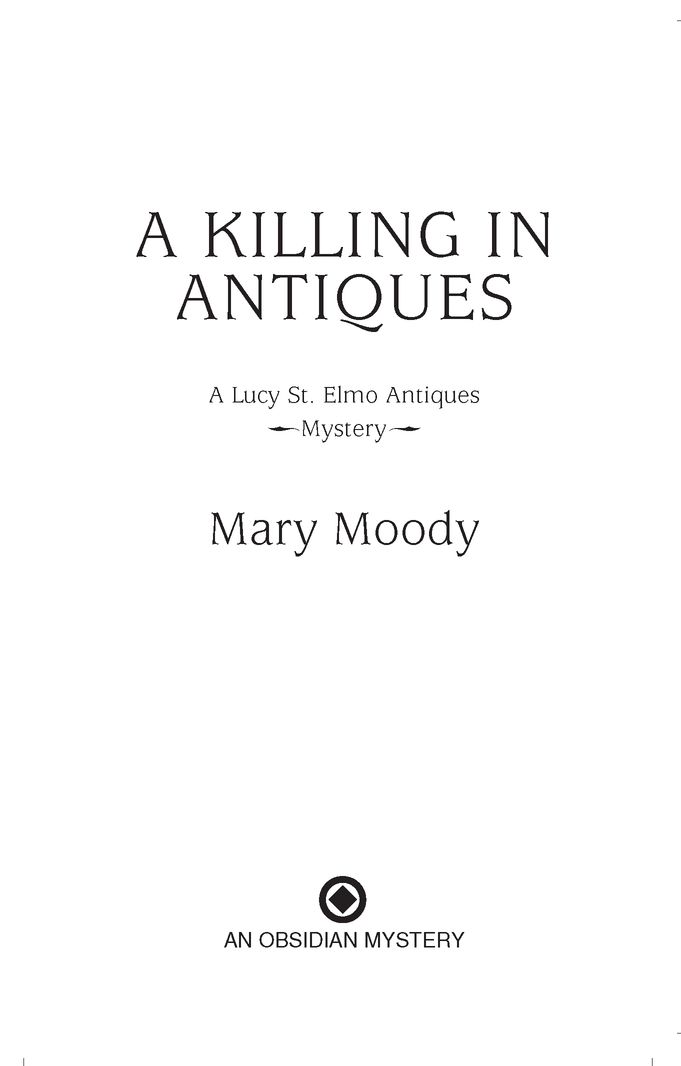 Table of Contents
Title Page
Copyright Page
Dedication
Acknowledgements
Chapter 1
Chapter 2
Chapter 3
Chapter 4
Chapter 5
Chapter 6
Chapter 7
Chapter 8
Chapter 9
Chapter 10
Chapter 11
Chapter 12
Chapter 13
Chapter 14
Chapter 15
Chapter 16
Chapter 17
Chapter 18
Chapter 19
Chapter 20
Chapter 21
Chapter 22
Chapter 23
Chapter 24
Chapter 25
Chapter 26
Chapter 27
Chapter 28
Chapter 29
Epilogue
MURDER BY LACE
An animated crowd had gathered at the nearby coffee truck, and there was no mistaking its excited chatter for the usual buzz. Something big was happening. Since I suffer from a terminal case of nosiness, I moved toward a fellow whose histrionics had attracted a crowd of listeners.
“The guy was murdered,” he said. “At the back of that field.”
Several others had joined the crowd, and he turned to face us. His gestures became even more exaggerated as he attempted to dramatize a struggle that included strangling himself until his eyes bulged. Then, in a hoarse whisper, he delivered his trump line. “He was strangled with a piece of lace.”
“Lace?”
I was dumbfounded. Few places felt safer than Brimfield. There have been a variety of flare-ups through the years, but no real violence.
“He was found at daybreak,” someone put in.
And then I heard who it was. My God, Monty Rondo. I felt the breath get knocked right out of me.
OBSIDIAN
Published by New American Library, a division of
Penguin Group (USA) Inc., 375 Hudson Street,
New York, New York 10014, USA
Penguin Group (Canada), 90 Eglinton Avenue East, Suite 700, Toronto,
Ontario M4P 2Y3, Canada (a division of Pearson Penguin Canada Inc.)
Penguin Books Ltd., 80 Strand, London WC2R 0RL, England
Penguin Ireland, 25 St. Stephen’s Green, Dublin 2,
Ireland (a division of Penguin Books Ltd.)
Penguin Group (Australia), 250 Camberwell Road, Camberwell, Victoria 3124,
Australia (a division of Pearson Australia Group Pty. Ltd.)
Penguin Books India Pvt. Ltd., 11 Community Centre, Panchsheel Park,
New Delhi - 110 017, India
Penguin Group (NZ), 67 Apollo Drive, Rosedale, Auckland 0632,
New Zealand (a division of Pearson New Zealand Ltd.)
Penguin Books (South Africa) (Pty.) Ltd., 24 Sturdee Avenue,
Rosebank, Johannesburg 2196, South Africa
Penguin Books Ltd., Registered Offices:
80 Strand, London WC2R 0RL, England
First published by Obsidian, an imprint of New American Library,
a division of Penguin Group (USA) Inc.
First Printing, July 2011
Copyright © Mary Moody, 2011
All rights reserved
OBSIDIAN and logo are trademarks of Penguin Group (USA) Inc.
Without limiting the rights under copyright reserved above, no part of this publication may be reproduced, stored in or introduced into a retrieval system, or transmitted, in any form, or by any means (electronic, mechanical, photocopying, recording, or otherwise), without the prior written permission of both the copyright owner and the above publisher of this book.
PUBLISHER’S NOTE
This is a work of fiction. Names, characters, places, and incidents either are the product of the author’s imagination or are used fictitiously, and any resemblance to actual persons, living or dead, business establishments, events, or locales is entirely coincidental.
The publisher does not have any control over and does not assume any responsibility for author or third-party Web sites or their content.
The scanning, uploading, and distribution of this book via the Internet or via any other means without the permission of the publisher is illegal and punishable by law. Please purchase only authorized electronic editions, and do not participate in or encourage electronic piracy of copyrighted materials. Your support of the author’s rights is appreciated.
ISBN : 978-1-101-53995-8

His Darkest Salvation by Juliana Stone
Revenge of the Paste Eaters by Cheryl Peck
Ambush at Shadow Valley by Ralph Cotton
Nobody Knows by Mary Jane Clark
Getting Over Getting Mad: Positive Ways to Manage Anger in Your Most Important Relationships by Judy Ford
Elected (The Elected Series Book 1) by Rori Shay
The Whore by Lilli Feisty
Death Lords Motorcycle Club: Annie, Michigan, and Easy (The Motorcycle Clubs Series) by Ella Goode
I Found You by Lisa Jewell
American Fraternity Man by Nathan Holic
Our partner