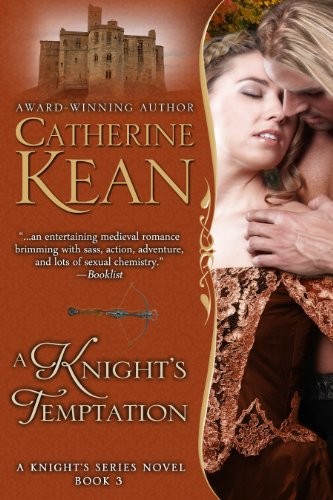 For my father, David Lord. Thank you for sharing your love of history with me.

All elements of this book are fictional.

The author reserves all rights to this eBook.

This eBook may not be re-sold or reproduced in any way.

This novel is a reissue and was previously published in mass market paperback.

Special thanks to Lisa Ault and Diane Pennea, who gave me lots of great information on allergic reactions to bee stings.

“Tie her well. She must not get free.”

Eight-year-old Leona Ransley twisted her hands, bound behind the oak tree. Turning her head against the bark, she tried to catch the attention of her eleven-year-old brother, Warden, busy securing the rope, but the broad tree trunk hid him from view. When he yanked the rope tighter, she fought not to wince.

Leona glared at the blond boy who’d called to her brother and blew aside a strand of hair loosened from her braid. The boy’s name was Aldwin Treynarde, and he was the son of an earl and a new friend of Ward’s. Aldwin stood a few yards in front of her, brandishing a stick as though it were a knight’s sword, his eyes bright with excitement. How she wished her brother had never met him!

Narrowing her eyes to what she hoped was a threatening squint, she said, “I do not want to play this game. Ward, untie me.” She tugged her arms, hoping to thwart his binding.

“Nay.” Aldwin’s stick pressed into her shoulder. Not hard enough to hurt through the layers of her sage green silk gown and chemise, but to tell her he was in command.

Her bound hands clenched into fists. If she wasn’t tied, she’d slam her fist into his jaw, a perfect punch the way Ward had taught her. Even if Aldwin
was
the son of a rich earl and her parents had told her to be on her best, ladylike behavior today.

“Ward,” she said between her teeth. “Untie—”

“We need a maiden for our game,” Aldwin cut in. “You will stay bound. And you will play your part exactly as I say.” His mouth tilting in a grin, he flicked aside her loose hair with his stick. The whistling sound sent a shiver racing down her spine.

“I do not have to listen to you. Neither does my brother.”

Aldwin laughed as though she’d said something foolish, pivoted away, and rammed his stick at an imaginary foe.

The ropes around her wrists tightened again. “Ward,” she called, but at that moment, Aldwin loosed a triumphant roar, the force of his cry drowning hers. His sword listed toward the ground, suggesting his invisible opponent had collapsed, dead. Yelling again, he waved his sword in the air.

Swallowing the awful taste gathering at the back of her mouth, she realized she’d have to appeal to Ward the moment he came out from behind the tree. After all, he wasn’t close friends with Aldwin. They’d only met that day, when the noble families invited to this riverside keep in Southern Moydenshire had headed into the great hall for the midday feast; the castle was ruled by a friend of her father’s, and the meal was to precede an important meeting of all the lords.

Aldwin and Ward had sat beside each other, and the boys had giggled through the entire meal—most annoying, when, for the first time in as long as Leona could remember, her brother wouldn’t tell her what was so amusing.

When the noblemen had gathered at the lord’s table to discuss matters of estate, and Leona’s mother had gone with the other ladies to tour the rose garden, Leona had slipped outside with Aldwin and Ward to the nearby field. They’d promised she’d be part of their game.

How she’d looked forward to sword fighting with sticks, playing chase in the field near the stream, and skipping stones across the water. Head held high, she’d barely restrained an excited grin. Her whole body longed for the moment when she’d jab Aldwin in the belly with her stick. He’d cry out in shock. His face might even go red with embarrassment, because she’d bested him. She’d prove to him that she might only be eight years old, while he was at least twelve, but she was no helpless girl.

Born a fighter
, her mother always said with a tender smile.
I will never forget how you kicked, fussed, and flailed your little fists while the midwives tended you. A remarkably strong, healthy girl, they said. ’Tis why your father and I named you Leona. Your name means “lioness.”

How, then, had she become the damsel tied to the tree awaiting rescue?

A tug on Leona’s long braid made her grimace. Straining to glance behind her, she scowled. “Ward!”

Her brother appeared at her side. The silk ribbon that had wrapped around the end of her braid dangled from his fingers. “A token from you, maiden,” he said, holding the ribbon aloft, “for us knights to take into battle.” Shoving tousled, brown hair from his eyes, he winked at her with enough charm to melt a frozen puddle. “All right, sis?”

“Nay. Did you not hear me? I do not want to play anymore.”

Grass crunched as Aldwin drew near. Ward grinned at him. Gnawing the middle of the ribbon, he looked back at her. “I will not tie your legs. I think you are well enough bound.”

Leona’s jaw dropped on a gasp. Her brother couldn’t have missed her saying she didn’t want to take part any longer. A dull ache squeezed her stomach. He’d never gone against her wishes before today. Neither did he seem to notice her dismay.

“Ward.” She tried not to shout.

Why is Aldwin’s game more important than I am?
“Mother will not be pleased that you ruined my ribbon.”

The silk began to fray. Ward ripped it in half and handed part to Aldwin. “If she asks, say you lost it. You will not tell on me, sis, will you?”

Ward exchanged a glance with Aldwin, and then winked at her. A look that said,
I know you won’t betray me. You owe me the favor many times over.

“Remember what I told you about the game,” Aldwin said while he began tying his ribbon scrap around his stick. “Count to ten. Then, scream as if you are being attacked by Saracens who plan to cut out your guts and eat them raw.”

Grabbing his own stick from the ground, Ward swished it to and fro. “Ha! We two fearless crusaders will rush to your rescue.”

“Ha!” Aldwin roared, leaping over a tree root. He lunged, slashing at another imaginary foe, then at a bee flying past. His blond hair shone in the sunlight and he moved with remarkable grace, each move elegant and precise.

Leona shook her head. “Ward, untie me. Let us go skip rocks. Or, better yet, duel.” She shot Aldwin a fierce stare. “The losers must forfeit their evening meal.”

Aldwin’s mouth tilted in a smug grin. He swatted at another bee buzzing around him. “Girls do not fight.”

Angry heat burned her face. “I can wield a stick as well as you.”

His brows raised. He clearly didn’t believe her.

Oh, how she couldn’t wait to trounce him! “Free me. I will gladly prove you wrong.”

Aldwin snorted and looked about to roar with laughter.

Ward choked. He looked unsure whether to guffaw or yell at her.

A frown darkened Aldwin’s face. Pinning her with his gaze, he murmured, “What did you say?”

She smiled back, very sweetly, for her mother wasn’t here to scold her for her unladylike oath, and she’d learned the word
turd
from Ward.

Her brother raised his hands, obviously eager to stop the confrontation. “Sis, please. As Aldwin said, we need a maiden for this game. Play along. When ’tis done, we will duel.”

She glanced over at Aldwin. Still glowering. Good.

Raising her chin to a defiant tilt, she looked back at Ward. “Promise we will fight later?”

Aldwin stepped forward.
Come close enough for me to kick you
, she silently pleaded. Alas, he didn’t.

“’Tis settled,” he said in that take-command voice. “One last matter, and we will start.”

“What matter?” Leona’s smile faded. She was securely tied, unable to escape this wretched game even though she didn’t want to play. What more could he want from her?

Aldwin looked at Ward, and they both giggled.

She swallowed a groan. When her brother’s laugh was tinged with mischief, that usually meant trouble. For her.

“Before the king’s knights leave for crusade,” Aldwin said, “they kiss their maiden.”

“A promise they will protect her and return for her.”

“Where did you learn that? You invented it for this stupid game.”

“I am not kissing you! Not in this game. Not ever!” She struggled anew. “Ward!”

While she thrashed, her brother strode to her side and pressed a noisy kiss upon her cheek. “Fare thee well, fair maiden.”

As Ward stepped back, Aldwin shook his head. Pulling a dangling thread from the ribbon around his stick, he said, “’Twas not a real kiss.”

“She is my sister. ’Tis not natural to kiss her on the mouth.”

With a lazy swagger, Aldwin crossed to her. Before she could twist her body to kick him, his hand closed on her jaw and forced her chin up. The earthy scent of bark clung to his fingers. She turned her head from side to side, refusing to hold still and accept his kiss. Her breath hissed between her teeth. “Do not dare to kiss me!”

“Fare thee well, Maiden of the Biting Words.” Aldwin’s mouth pressed to hers.

The bold kiss took less than the space of one breath. With a lopsided grin, Aldwin stepped away, grabbed Ward’s arm, and pulled him to a lope. “Come on.”

She blinked. Choked. “You—”

Laughing and shoving each other as they ran, the boys disappeared into the brush fringing the nearby trees. Startled birds winged up from the undergrowth, then swooped down into the field.

“Turd, turd,
turd!
” She kicked the dirt, sending earth spraying across the web of tree roots. She kicked a few more times, for good measure. Dropping her head back against the trunk, she groaned.

The familiar tapestry of sounds—humming insects, chirping birds, and whispering tree leaves—settled across the field.

A bee flew up beside her. She shifted her upper body, willing the insect to fly away. Another joined it, circling the tree, edging closer to her hair.