Read A Lady in Name Online

A Lady in Name 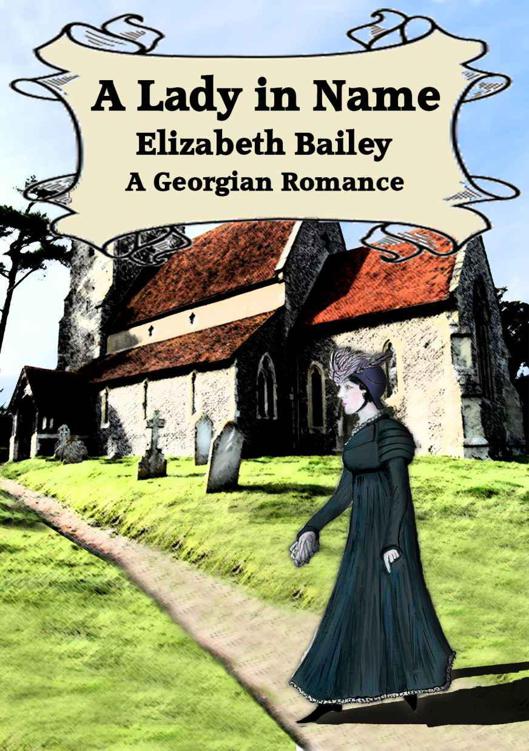 A LADY IN NAME

No part of this publication may be reproduced, stored in a retrieval system, or transmitted in any form or by any means without the prior permission in writing of the author. Nor be otherwise circulated in any form of binding or cover other than that in which it is published and without a similar condition including this condition being imposed on the subsequent purchaser.

A LADY IN NAME

On d
iscovering she is the love child of a peer of the realm, Lucy Graydene, bereft and grieving, sets out to confront Lord Pennington with the result of his misdeeds. She finds instead his autocratic heir, Stefan Ankerville, and is dragged willy-nilly into the new earl’s unconventional family. Lucy is driven to battle for her independence while she struggles against the venom of the half-sister she never knew she had.

When the secrets of Lucy’s past begin to unravel, she is reluctantly obliged to rely on Stefan’s help. Can Lucy overcome a dangerous attraction to the earl, with whom an alliance is impossible? Or is there a faint hope of happiness in the hidden truth of her origins?

The hubbub of a busy inn penetrated dimly into the quiet of the upstairs parlour.
It was a small apartment, designed for privacy rather than comfort, and furnished with the minimum of necessities. A chill hung in the January air, little eased by the meagre warmth from a fire in the grate, but the solitary occupant of the room appeared unaffected by this circumstance, although her aspect was far from relaxed.

She was seated on one of the straight high-backed chairs placed about the heavy oaken table at which travellers were encouraged to partake of refreshment
s, but she had not thought to move it nearer to the hearth. Nor was there any sign that she had availed herself of the innkeeper’s offerings to assuage either hunger or thirst. She was clad in a plain black greatcoat, and a simple black bonnet, unadorned, concealed her hair and a good deal of her face. She sat perfectly upright and still, except for her gloved hands, which she repeatedly clasped and unclasped where they lay in her lap.

From time to time, her eyes flickered to the door, as if in the expectation of its opening at any moment.
And once she cast a frowning glance at the case clock on the mantel, which was dragging its way about the eleventh hour, its steady ticking pulling her out of her unquiet thoughts.

She scarcely knew what she was doing here, and the longer she waited for an arrival upon which she could place no real dependence, the stronger grew her anxieties.
What had she to hope for, thrusting herself upon the notice of Lord Pennington? The man who had repudiated her three and twenty years ago was unlikely to greet her sudden appearance with complaisance. Nor could she imagine the intervening years had changed one hard-hearted enough to reject all responsibility for the consequences of his libertine conduct. Despite his cloth, Papa’s dictum, frequently uttered, had been that a leopard never changes his spots.

The remembrance caught at her heartstrings, turning a knife in the wound.
Papa
—so she must always think of him. She churned again with the futile yearnings that had plagued her from the instant of his uttering the fateful confession.

If only he had not chosen to reveal the horrid truth of her origins
. If only he had been spared the necessity. If only the Almighty had spared him. And most painful of all, if only Lucy had been more alert to his weakness after the dreadful downpour.

It had caught him on a visit to Mrs Mimms
—one of the poorest of Papa’s parishioners, her cottage situated a good five miles from Upledon vicarage with no vestige of shelter between. The dread picture of his return, his clothes dripping, his horse streaming in the deluge, had haunted Lucy from the onset of his short and fatal illness.

In vain had Papa protested at her rage of tears, his once round tones faint with effort as he drew each difficult breath.
‘My child, you could not have known. Recollect that I was well for days after the incident.’

‘Apparently well,’ Lucy had argued, fierce against the inevitable doom she was powerless to prevent.
‘You were pale, Papa. And you could not stand for long without a rest. I see it now. I should have seen it then.’

‘Lucy, there is nothing you could have done.
It is God’s will, and you must accept it.’

But Lucy was incapable of trusting to the will of a deity who could deprive her at one stroke of her sole source of loving comfort and the entirety of her life’s belief.
Oh, Papa, if only you had not told me
! Except that if he had not, he would not have been the man she had known and cared for as her father: compassionate, patient, and the exemplar of “the milk of human kindness” demanded by his calling. Else he could not have taken to his heart and raised as his own the child of dubious parentage Lucy now knew herself to be.

Caught in the turmoil of her unhappy thoughts, the opening of the door took Lucy unawares.
She jumped, her eyes flying to the aperture where a man stood revealed. She took in a tall frame enveloped in the grey of a many-caped greatcoat, one slender hand holding to the door handle. From under a dark beaver hat, a steel gaze pierced her in a countenance considerably younger than Lucy had anticipated.

Startled, she shot out of her chair, starting forward a step or two, a riot of question leaping to her tongue.

‘Oh! Surely you cannot be—? There must be some mistake! Unless—have you been sent by him? Or, no—perhaps you have mistaken the room?’ Lucy gathered her scattered thoughts. ‘This is a private parlour, sir.’

The gentleman made no move to vacate the room, but the disconcerting violence of his regard lessened a trifle.

‘Yes, I am she.
But you—I was expecting Lord Pennington.’

Bewildered, Lucy watched him come into the room and shut the door. Stripping off his gloves and removing his hat, he threw both onto a convenient chair as he crossed to the mantel. There he turned, the hard grey eyes resuming their interrupted scrutiny of Lucy’s features.

She stood her ground, bafflement giving way to a sickening hollow in her stomach.
Had Papa been mistaken? The Lord Pennington confronting her was obviously not her real father, though he might well have succeeded to the title. Why then had he acceded to her request for an interview? To avoid scandal? Perhaps he meant to pay her off. Unlikely, for his aspect was forbidding.

In the clearer light, Lucy noted strength in the jaw, which was clenched, the lips above tight with the same fierce ire visible in the eyes.
His cheeks were lean, his nose cleanly moulded, and hair of an auburn hue showed a tendency to an unruly wave where it rested on his collar. His greatcoat hung open, revealing well-cut clothes beneath and a glimpse of shapely leg.

‘I had your letter.’

‘We will get straight to the point, Miss Graydene.
What is it you want?’

His lip took on a sardonic curl.
‘Then why are you here?’

‘I have been asking myself the same question as I waited.’

For a moment Lord Pennington’s inimical regard held. Then he seemed to relax a little. He came to the table and pulled out a chair, indicating the one she had been occupying.

Lucy complied with a sudden rush of relief, discovering the instant she was in the chair that her legs were shaking. She clapped her hands together and slammed them onto her knees, desperate to prevent her weakness from being discovered by those penetrating grey eyes.

Lord Pennington sat down near her, one long leg stretched out, the other tucked under as he leaned back, setting one arm along the table.
Much to Lucy’s discomfiture, he continued to regard her with the same appraising stare. But he made no allusion to her tremors and she was emboldened to hope she had successfully concealed them.

She would have been dismayed had she known how much his lordship had taken in of what she preferred to conceal.
Stefan Ankerville, Earl of Pennington for the better part of a year now, had been set in a mood of cold fury by this morning’s errand. His ire was directed less at the supposed victim who had sued to him for succour than at his uncle for this fresh discovery to add to a sordid legacy.

Miss Graydene’s letter had been brief and to the point, giving no hint of her reason for revealing herself, but Stefan had come prepared for a harpy.
Instead, he had discovered a female of evident gentility. There was, moreover, no sign of want in her appearance. The garments were new, if he was any judge, and of respectable quality, if not precisely fashionable.

At a guess, her obvious bereavement was recent, a notion borne out by the pale cast of her cheek, strain about the dark eyes and a certain gaunt
look about her willowy form. Stefan was struck by an indefinable air that hung about her—of tragedy. Or was that fanciful?

By her communication, he had known Miss Graydene was unaware of his uncle’s decease, and had taken grim satisfaction in her first inevitable confusion.
A moment’s scrutiny had reassured Stefan as to her condition in life, and her attitude—scarcely conciliatory—argued against his initial expectation. Nevertheless, if Miss Graydene supposed he was a man to be easily bled, she had something to learn of him.

‘Your letter was explicit,’ he said, keeping his tone carefully controlled.
‘You claim to have been fathered by Lord Pennington, and you expect—’

‘Very well then, you hope he may be induced to visit you here for a purpose which you cannot set down in writing. Have I that right?’

From the defiance in her stare, it was evident the ironic inflection was not lost on the girl. Stefan was conscious of a flicker of admiration.

‘I realise your letter cannot have been intended to my address,’ he continued smoothly.

He was nettled. ‘This hostility of yours is scarcely politic in the circumstances, Miss Graydene.’

Her cheeks grew taut, indignation bringing a shine at the dark of her eyes.
‘Do you take me for a beggar, my lord? Who has been wronged here? Your predecessor—for such I assume the villain to have been—is at fault, not I. I did not frame my request to you, but to him. If you are his son—’