Read A Life of Inches Online 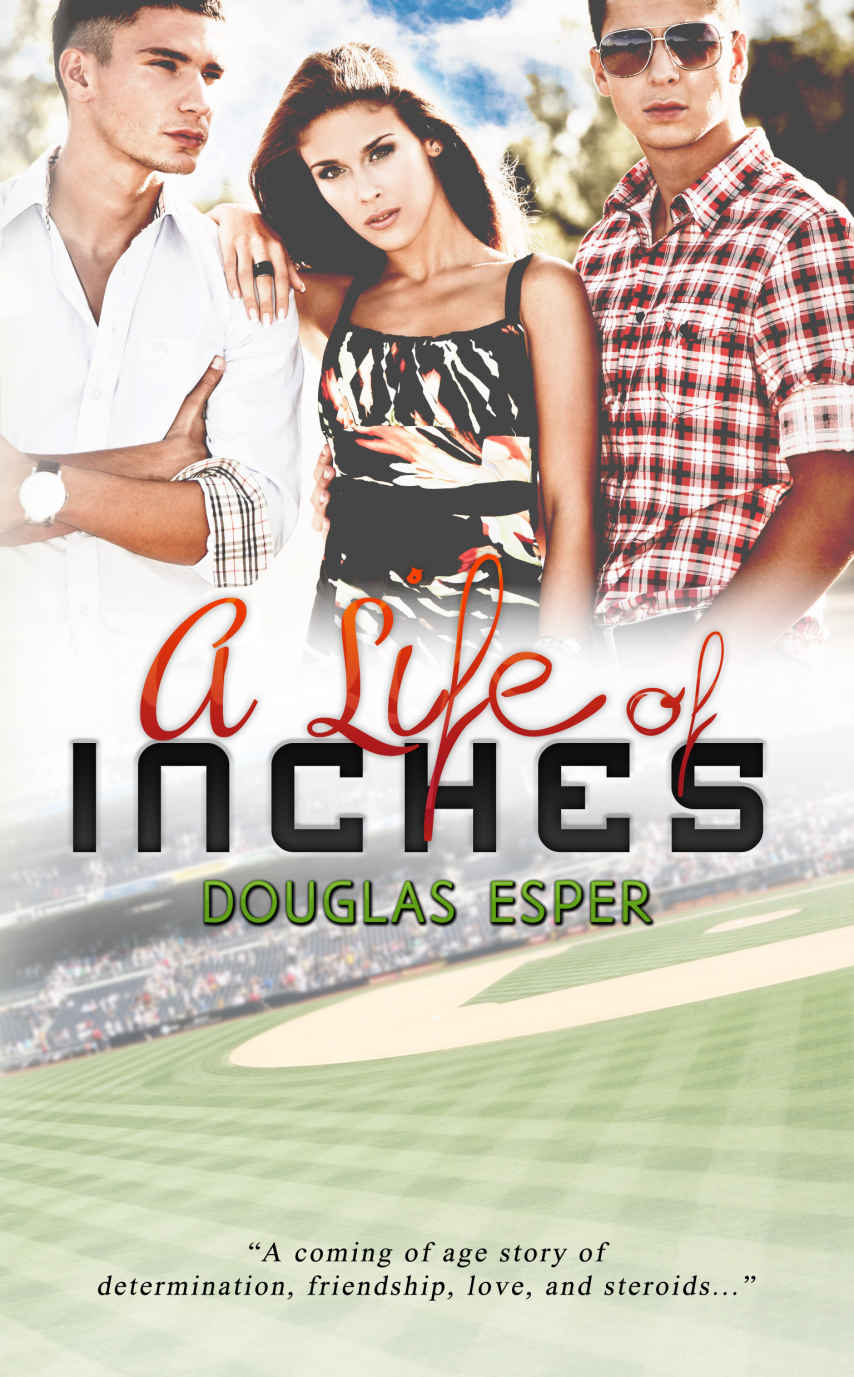 For Michele: My compass, my teammate, after eight quick years of grinding away at this book, you deserve a break, but tomorrow we start on the next one.

I’m just a few inches ahead.

“Loser washes the dishes,” I call out to my friend, Woodie.

He and I are racing our bikes home from the baseball diamond to catch the first pitch of the Cleveland Indians game on TV.

Woodie angles to pass on my left. “You are slow like girly man.”

He and I compete in everything we do, including our imitations of Hanz und Franz. I chuckle and keep pumping to keep my lead. His bike screams down the hill toward the finish line, a bright red rocket.

We’ve raced these streets for years, so we know how to exploit our surroundings, from the broken fence in Mrs. Newton’s yard to the skateboard ramp in the Fraziers’ driveway. Jumping off the sidewalk and onto the street, I swerve a few inches to avoid an overturned garbage can. I spy the key to victory ahead. An orange Camaro muscles toward the T-shaped intersection at the bottom of the hill. If I time this right, I’ll be dashing through the intersection ahead of the car while Woodie, zooming down the opposite end of the road, will have to slow down and swerve behind it. This won’t be a huge obstacle, but it should provide just enough distraction to force my fiercest competitor to forfeit any chance of victory.

Woodie launches his bike over a square of freshly tilled earth and gets rewarded with a blast of cold hose water as he passes the furious gardener. I dart into the intersection a few seconds ahead of the car. Sacrificing a little control, I peek back and see Woodie pumping his pedals, right into the Camaro’s path. If he’s not careful, I’ll be scraping him off Robindale Boulevard.

The car plows through the intersection, blasting a song by The Clash that the driver has taken the liberty to make a duet. Its brakes engage with a squeal as the wannabe vocalist finally notices the daredevil bike racer attempting to skirt right in front of the car.

After crossing the finish line, I whip my bike around just in time to see the actual collision. A thick layer of smoke billows from the tires as they overheat from the friction of the brakes and the road.

Woodie’s bike catches the brunt of the impact as he attempts to leap over the sleek muscle car.

A scream catches in my throat. Woodie’s right ankle clips the Camaro’s roof, sending him spinning face-first toward the street with nothing to break his fall. This is bad, real bad. This is Herb Score getting hit in the face with a line drive bad. Visions of donating a liver, giving blood, and missing football practice to help Woodie get his wheelchair home all race in my mind as I dump my bike.

Calling for my friend, I rush toward the scene of the accident.

Woodie’s legs writhe on the ground as I round the car, but the longhaired bastard that couldn’t control the Camaro blocks the rest of him. The lack of cries of surprise or pain ratchets up my concern. Woodie hasn’t answered my repeated calls nor, as far as I can tell, uttered even a single peep since he landed on the street.

Anxiety ripples off the driver like too much cheap cologne, but underneath the worry a subtle scent emanates, like a patch of lilac hidden deep in a peach tree orchard.

In a matter of seconds I transform from someone hell-bent on doing anything to help his best buddy into a man fighting for the attention of the most beautiful girl he’s ever laid eyes on.

Now that I can see the driver’s face, I recognize Molly from my school and I can’t take my eyes off of her. “Y-you okay, buddy?”

Even to me, my voice sounds insincere, like the last thing in the world I care about is the well-being of my friend who was just bull-rushed by a car. I know if I split my focus between my buddy and the beauty I will be useless to both of them. In my eyes, there’s only one thing I can do.

A quick glance confirms my friend’s still breathing, so I forget about Woodie.

No longer will I identify him as my
good friend who might be disfigured after getting hit by a car and needs me to avenge his injury
. Woodie is now the only obstacle between me and
Ms. Big Green Eyes, habit-forming lips, body of a goddess, who likes good music such as The Clash, and judging from the huge Cleveland Browns #19 sticker on the bumper of her mint condition Camaro also loves football
.

As the all-too-long yet all-too-true nickname forms in my mind, Molly registers my presence.

Gentle as a swift kick to the stomach, I realize that although tears are streaming down her face, her grin and giggles express flirtatious relief. Somehow Woodie, the lucky bastard, has turned a horrible crash into a chance encounter with the most gorgeous student at our school. Not only has he escaped without any serious injuries, my friend has emerged from facing serious injury chuckling like a badass in the process. His arms are cradled around his chest, probably to alleviate the sting in his vibrating ribs.

Molly leans down and places a hand on Woodie’s elbow. “I’m so, so sorry.”

Her voice rings sweet with a confident edge, a mixture of Annie Lennox and Pat Benatar. She inquires about his evident bruises, but of course most of them are from playing sports long before the accident.

I step closer, clearing my throat of emotion. “Woodster, let me help you up.”

My voice comes out as a scratchy cough rather than the macho boom I’d hoped for. Still catching my breath, I become self-conscious about the massive amount of sweat pouring down my face and wipe away as much of it as I can with my already damp MC Hammer T-shirt.

Without turning away from my friend, Molly says, “Let’s get him up together. You grab that arm, I’ll get this one.”

Lost in her presence, I stare but do not respond.

She glances back at me, her attention breaking me from my inaction. I puff up my chest and attempt a neutral expression. “Uh, right. Don’t worry, I’m here, bud.”

We help Woodie to his feet. Making sure my biceps flex when I “accidentally” brush her arm, I end up impressed by the tone in her muscles instead.

Though Woodie escaped with all of his bones unbroken, I notice his bike wasn’t so lucky. The bend in the front of the frame curves so severely it resembles a piece of modern art more than a functional transportation method.

I pivot to shake her hand, but she’s introducing herself to Woodie. I freeze, my hand sticking out like the Tin Man in need of oil.

Woodie introduces himself, and then says, “This is my buddy, Ryan.”

Molly and I share a fleeting moment as she nods her head. Even in the bright sunshine I observe the faint freckles dotting the tops of her cheeks. ‘Cute’ would be an insult.

Molly points to the mangled metal frame and wheels. “Can I give you a lift home?”

Woodie flashes me a pleading glance.

I step forward, placing a hand on his shoulder. Though I’m happy to help out a friend, I still need to conceal jealousy and resentment from my tone. I opt for a caring, helpful approach, which isn’t far from my true feelings anyway. “Hey Woodie, you shouldn’t be riding anymore. You landed pretty hard and look dizzy. Why don’t I just walk your bike home?”

Molly gives me a double take. “Whoa, hey are you Michael Kelly’s son?”

Her question catches me off guard, so I tilt my head like a dog who just heard a high-pitched whistle. “Yeah, how do you know my dad?”

I nod. “Who doesn’t? She’s on the front page like every day talking about one cause or another.”

“Bingo. I’m her daughter. I’ve been to several of the benefits your father has helped organize for my mother’s campaigns.”

I know nothing about politics or why my dad helps her out, so I’m at a loss on how to keep the conversation going.

Luckily, Molly adds, “I think you and I had Chemistry last year.”

My feeble attempt at flirting nets me a roll of her beautiful eyes, but I also detect the slightest blush in her cheeks.

He tosses something small and metallic in my direction. Before I snatch it out of the air, one-handed, I know what he threw. Woodie and I have a running joke about a “lucky” golden baseball mitt strung on a necklace. Whenever one of us needs extra karma, we pass it along to help out.

“You keep it, man. I think that thing is cursed.” He winces. “Man, my arm is starting to swell up. Thanks for watching my bike, dude. You won the race today, though you have Molly here to thank more than anything.”

As they drive away, I’m left walking two bikes home by myself.

At home, I finish off the dishes Woodie should’ve been shamed into doing and flip on the game. The Indians win, but I watch the game alone. Molly and Woodie never show up.