Read A Lion Among Men Online

A Lion Among Men 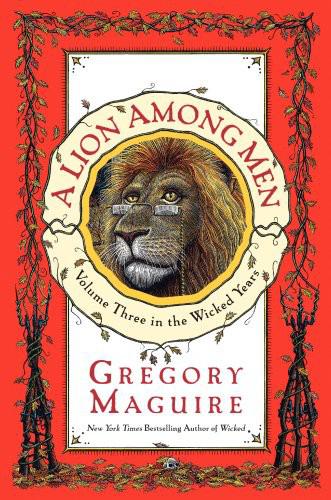 The House of Ozma

The Uplands of Gillikin

A
BRIEF
OUTLINE
OF
THE
THRONE
MINISTERS
OF OZ

The Ozma line descends from a Gillikinese clan. It originally claimed legitimacy through a purported divine relationship with Lurlina, fabled creatrix of Oz. Depending on the claim, history records between forty to fifty Ozmas and their regents.

Ozma the Bilious expires through an accident involving rat poisoning in the risotto. Her consort, Pastorius, becomes Ozma Regent during the minority of Ozma Tippetarius.

He renames the hamlet known as Nubbly Meadows, near the ancient burial ground of Open Tombs, as the Emerald City (EC). Declares the EC as the capital of united Oz.

Diggs successfully mounts a palace coup d’état. Pastorius is murdered, and the infant Ozma Tippetarius disappears. She is presumed slain, perhaps in Southstairs Prison (built over the Open Tombs), though an evergreen rumor claims she lies enchanted in a cave, to return only in Oz’s darkest hour. Diggs becomes known as the Wizard of Oz.

This serves as a highway for the armies of the EC and aids in the collection of local taxes from previously independent populations, especially in Quadling Country and on the eastern flanks of the Great Kells of the Vinkus.

Under the rule of Nessarose Thropp, Eminence of Munchkinland, the secession is conducted with a minimum of bloodshed. The “breadbasket of Oz” maintains an uneasy commercial relationship with Loyal Oz.

The arrival in Oz of a visitor, a Dorothy Gale of Canzizz (sometimes transcribed as “Canzuss” or “Kanziz”), results in the death of the Eminence. Speculation suggests her sister, Elphaba Thropp, will return to Munchkinland to mount a more aggressive campaign against the EC than Nessarose ever did.

The so-called Wicked Witch of the West, onetime agitator, now recluse, is subdued by the powerful Dorothy Gale.

The Wizard had held power for almost forty years. The reasons for his departure remain a matter of speculation.

The Animal Adverse laws are revoked, to little effect; Animals remain skeptical of their chances of being reintegrated into human society in Oz.

The Scarecrow, a figure of uncertain provenance, is often assumed to have been installed as Throne Minister by palace apparatchiks sympathetic to Shell Thropp, an ambitious upstart engaged in mercenary espionage. The Scarecrow proves to be a weak figurehead-a straw man, figuratively as well as literally-but his tenure allows Shell Thropp to avoid having had to challenge the popular Lady Glinda for the leadership. The Scarecrow’s whereabouts following the end of his abbreviated realm are never revealed.

Some historians hold that the Scarecrow serving as Throne Minister was not the same Scarecrow who befriended Dorothy, though this assertion is unverifiable.

The youngest of the three Thropp siblings, Shell claims rights of ascendancy through an adroit manipulation of Palace power brokers.

IN
CAME
A
BOY
from Three Queens rolling a table like a tea tray. On it, crouched as if to make itself as small as possible, was a lion cub. Even from the balcony they could sense the terror of the beast. Its tail, a little whip the color of mashed peanuts, lashed back and forth, and its shoulders hunched. It had no mane to speak of yet, it was too tiny. But the tawny head twisted this way and that, as if counting the threats. It opened its mouth in a little terrified yawp, the infant form of an adult roar. All over the room hearts melted and people said, “Awwwwww.”

“Hardly more than a kitten,” said Doctor Nikidik. “I had thought to call it Prrr, but it shivers more often than it purrs, so I call it Brrr instead.”

The creature looked at Doctor Nikidik, and removed itself to the far edge of the trolley.

“Now the question of the morning is this,” said Doctor Nikidik. “Picking up from the somewhat skewed interests of Doctor Dillamond…who can tell me if this is an Animal or an animal?”

Elphaba didn’t wait to be called on. She stood up in the balcony and launched her answer out in a clear, strong voice. “Doctor Nikidik…. It seems to me the answer is that its mother can. Where is its mother?...Why is it taken from its mother at such an early age? How can it even feed?”

“Those are impertinent questions to the academic issue at hand,” said the Doctor. “Still, the youthful heart bleeds easily. The mother, shall we say, died in a sadly timed explosion…”

Deposition of an Oracle
1

T HE
TIME
came for her to die, and she would not die; so perhaps she might waste away, they thought, and she did waste, but not away; and the time came for her to receive final absolution, so they set candles upon her clavicle, but this she would not allow. She blasphemed with gusto and she knocked the scented oils across the shroud they’d readied on a trestle nearby.

“God love her,” they said, in bitter, unconvincing voices-or perhaps they meant May the Unnamed God love her, our unrepentant sister Yackle, for we certainly can’t.

“Sink me in the crypt,” she said, speaking directly to them for the first time in years. “You’re too young to know; that’s how they used to do it. When the time came for an elder to go and she wouldn’t, they settled her down in the ossuary so she could chummy up to the bones. Supplied her with a couple of candles and a bottle of wine. Let her get used to the notion. They came back a year later to sweep up the leavings.”

“Mercy,” said whoever was nearby to hear.

“I insist,” she replied. “Check with Sister Scholastica and she’ll bear me out.”

“She’s raving mad,” said someone else, chocolately. Yackle approved of chocolate, and indeed, everything edible. Since Yackle’s eyesight had gone out for good a decade earlier, she identified individuals by the degree and idiosyncracy of their halitosis.

Yackle reached for something to throw, and all she could find was her other hand, which wouldn’t detach.

“It is,” said Yackle, “it is, I keep telling you. Won’t you fiends let me die? I want to go to hell in a handbasket. Put me out of my misery and into the Afterlife where I can do some real damage, damn it.”

“She’s not herself,” said someone.

“She was never reliably herself, to hear tell,” said another.

The bedsheets caught fire spontaneously. Yackle found she was rather enjoying this, but it helped neither her reputation nor her rescue that the only liquid nearby with which to douse the flames was cognac.

Still, Yackle was not to be dissuaded. “Isn’t there a Superior in the House?” she asked. “Someone who can lay down the law?”

“The Superior Maunt died a decade ago,” they replied. “We work by consensus now. We’ve noted your request to be interred alive. We’ll put it on the agenda and take it up next week at Council.”

“She’ll burn the House down, and us with it,” muttered a novice, sometime later. Yackle could tell that the innocent speaker was talking to herself, to stoke her courage.

“Come here, my duckie,” said Yackle, grasping. “I smell a little peppermint girl nearby, and no garlicky matron hovering. Are you the sentry? On our own, are we? Come, sit nearer. Surely there is still a Sister Apothecaire in residence? With her cabinets of nostrums and beckums, tonics and tablets? She must possess a sealed jar, it would be dark blue glass, about yea-high, pasted over with a label picturing three sets of crossed tibias. Couldn’t you find this and pour me out a fatal little decoction?”

Out of charity to the young, Yackle let go. It would do the poor girl no good to take a bite of old Yackle. The antidote en’t been invented yet, and so on.

Hours and days pass at elastic rhythms for the blind. Whether the pattern of her naps and wakings followed the ordinary interruptions of daylight by nighttime, Yackle couldn’t tell. But someone she recognized as Broccoli Breath eventually informed her that the sorority had decided to bow to Yackle’s final wish. They would install her in the crypt among the remains of women long dead. She could approach bodily corruption at whatever speed appealed to her. Three candles, and as to nourishment, red or white?

“A beaker of gasoline and a match as a chaser,” said Yackle, but she was indulging in a joke; she was that pleased. She nominated a saucy persimmon flaucande and a beeswax candle scented with limeberries-for the aroma, not for the light. She was beyond light now.

“Good voyage, Eldest Soul,” they sang to her as they carried her down the stairs. Though she weighed no more than sugarbrittle she was awkward to move; she couldn’t govern her own arms or legs. As if motivated by a spite independent of her own, her limbs would keep ratcheting out to jab into doorjambs. The procession lacked a fitting dignity.

“Don’t come down for at least a year,” she sang out, giddy as a lambkin. “Make that two. I might be old as sin itself, but once I start rotting it won’t be pretty. If I hammer at the cellar door don’t open it; I’m probably just collecting for some public charity in hell.”

“Can we serenade you with an epithalamium, as you go to marry Death?” asked one of the bearers, tucking in the shroud to make it cozy.

“Save your doggy breath. Go, go, on to the rest of your lives, you lot. It’s been a swell, mysterious mess of a life. Don’t mind me. I’ll blow the candles out before I lower my own lights.”

A year later when a sister ventured into the crypt to prepare for another burial, she came across the hem of Yackle’s shroud. She wept at the notion of death until Yackle sat up and said, “What, morning already? And I having those naughty dreams!” The maunt’s tears turned to screams, and she fled upstairs to start immediately upon a long and lively career as an alcoholic.

T HE
OTHER
maunts gave no credit to the drunken gibberish of their cowardly novice. They assumed she had succumbed to panic at the threat of war. Immediate war, local war. You could smell it in the air, like laundry soap, or an ailment in the sewers.

From the occasional evacuee who stopped to water his horses, Sister Hospitality gleaned what news she could. She broke her vows of circumspection to share with her fellow maunts what she learned.

By late spring, the four divisions of Emerald City foot soldiers massed on the north bank of the Gillikin River had been joined by a fifth and a sixth. Conscription having thinned the countryside of its farmhands, General Cherrystone released teams of men to assist in harvesting first-growth olives and early kindle-oat. The army then requisitioned most of what it had gathered as its fee for helping out.

“Indeed,” whispered Sister Hospitality, “tavern owners are said to be bricking up the better ale behind false walls. Their wives eavesdrop on tipsy officers and gossip over conflicting rumors. No one is sure of anything. Is the army constructing an underground canal into Munchkinland, to leach the great lake of its water? Is a new weapon being perfected upriver that will make an invading army invincible? Or are these maneuvers merely war games to intimidate the Munchkinlanders into making concessions?”

Her confidantes shook their heads, dizzy with the intrigue of it, which seemed oddly like life in a mauntery except more so.

“The mood of the season,” hissed Sister Hospitality. “Pray for peace but hide your wallets and your wives, and send your children away if you can.”