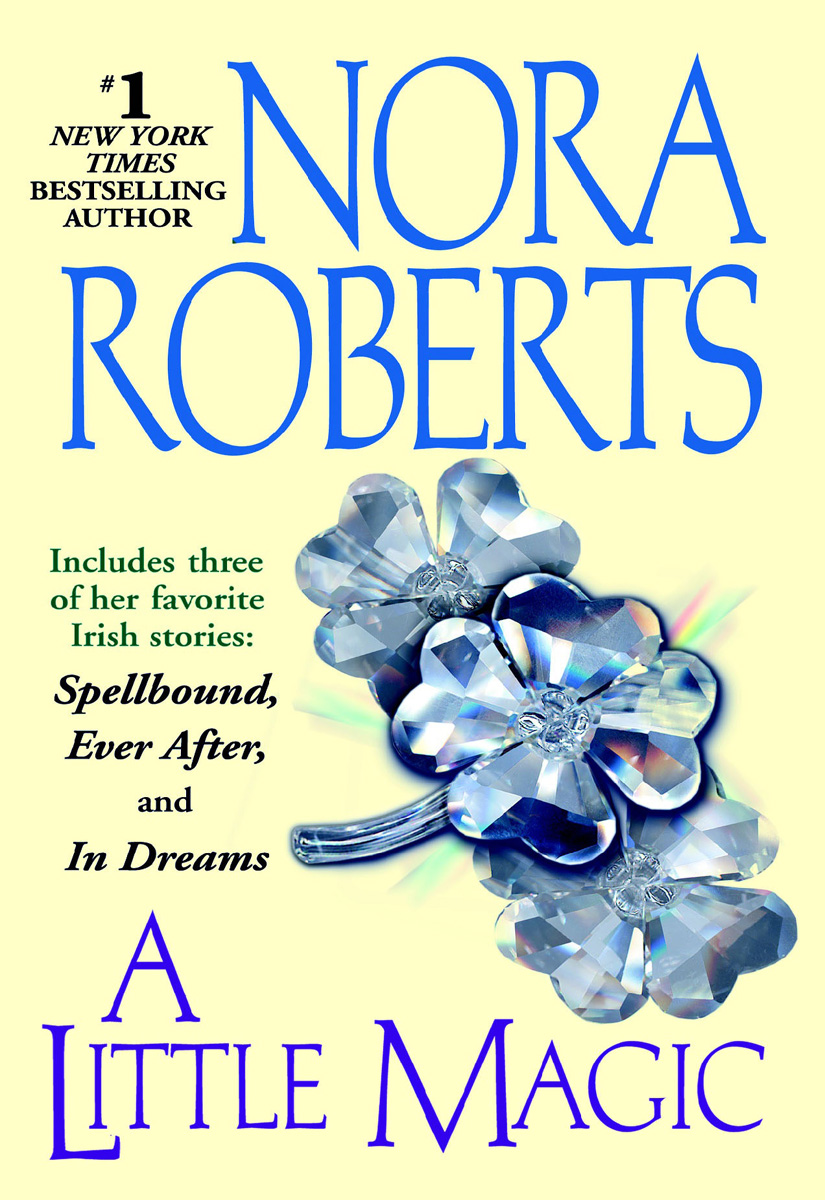 A master at depicting both the legends and the lore of Ireland and the tender, enchanting passions of its people, Nora Roberts “just keeps getting better and better”
(Milwaukee Journal Sentinel)
. Now, together in one volume, these delightful stories of magic and romance capture the everlasting beauty of this charming land—and prove that this #1
New York Times
bestselling author is truly “at the top of her game”
(People)
…

In “Spellbound,” a beautiful lady casts a thousand-year spell on the man of her dreams—and unleashes a nightmare only love can conquer…“Ever After” follows an enchanting woman as she journeys to an otherworldly land—and introduces a handsome artist to the transforming power of love…“In Dreams” links a young woman to a stranger’s past—and to the curse that has trapped him forever in the eternity of his own dreams…

“Roberts is indeed a word artist, painting her story and her characters with vitality and verve.”

Turn the page for a complete list of titles by
Nora Roberts and J. D. Robb from The Berkley Publishing Group…

JEWELS OF THE SUN

TEARS OF THE MOON

HEART OF THE SEA

In the Garden Trilogy

DANCE UPON THE AIR

The Once Upon Series
(with Jill Gregory, Ruth Ryan Langan, and Marianne Willman)

ONCE UPON A CASTLE

ONCE UPON A STAR

ONCE UPON A DREAM

ONCE UPON A ROSE

ONCE UPON A KISS

ONCE UPON A MIDNIGHT

OUT OF THIS WORLD
(with Laurell K. Hamilton, Susan Krinard, and Maggie Shayne)

JOVE is a registered trademark of Penguin Group (USA) Inc.

The “J” design is a trademark belonging to Penguin Group (USA) Inc.

L
OVE.
My love. Let me into your dreams. Open your heart again and hear me. Calin, I need you so. Don’t turn from me now, or all is lost. I am lost. Love. My love
.

Calin shifted restlessly in sleep, turned his face into the pillow. Felt her there, somehow. Skin, soft and dewy. Hands, gentle and soothing. Then drifted into dreams of cool and quiet mists, hills of deep, damp green that rolled to forever. And the witchy scent of woman.

The castle rose atop a cliff, silver stone spearing into stormy skies, its base buried in filmy layers of fog that ran like a river. The sound of his mount’s bridle jingled battle-bright on the air as he rode, leaving the green hills behind and climbing high on rock. Thunder sounded in the west, over the sea. And echoed in his warrior’s heart.

Had she waited for him?

His eyes, gray as the stone of the castle, shifted, scanned, searching rock and mist for any hole where a foe could hide. Even as he urged his mount up the rugged path cleaved into the cliff he knew he carried the stench of war and death, that it had seeped into his pores just as the memories of it had seeped into his brain.

Neither body nor mind would ever be fully clean of it.

His sword hand lay light and ready on the hilt of his weapon. In such places a man did not lower his guard. Here magic stung the air and could embrace or threaten. Here faeries plotted or danced, and witches cast their spells for good or ill.

Atop the lonely cliff, towering above the raging sea, the castle stood, holding its secrets. And no man rode this path without hearing the whispers of old ghosts and new spirits.

Had she waited for him?

The horse’s hooves rang musically over the rock until at last they traveled to level ground. He dismounted at the foot of the keep just as lightning cracked the black sky with a blaze of blinding white light.

And she was there, just there, conjured up out of storm-whipped air. Her hair was a firefall over a dove-gray cloak, alabaster skin with the faint bloom of rose, a generous mouth just curved in knowledge. And eyes as blue as a living star and just as filled with power.

His heart leaped, and his blood churned with love, lust, longing.

She came to him, wading through the knee-high mists, her beauty staggering. With his eyes on hers, he swung off his horse, eager for the woman who was witch, and lover.

“Caelan of Farrell, ’tis far you’ve traveled in the dark of the night. What do you wish of me?”

“Bryna the Wise.” His hard, ridged lips bowed in a smile that answered hers. “I wish for everything.”

“Only everything?” Her laugh was low and intimate. “Well, that’s enough, then. I waited for you.”

Then her arms were around him, her mouth lifting to his. He pulled her closer, desperate for the shape of her, wild to have whatever she would offer him, and more.

“I waited for you,” she repeated with a catch in her voice as she pressed her face to his shoulder. “’Twas almost too long this time. His power grows while mine weakens. I can’t fight him alone. Alasdair is too strong, his dark forces too greedy. Oh, love. My love, why did you shut me out of your mind, out of your heart?”

He drew her away. The castle was gone—only ruins remained, empty, battle-scarred. They stood in the shadow of what had been, before a small house alive with flowers. The scent of them was everywhere, heady, intoxicating. The woman was still in his arms. And the storm waited to explode.

“The time is short now,” she told him. “You must come. Calin, you must come to me. Destiny can’t be denied, a spell won’t be broken. Without you with me, he’ll win.”

He shook his head, started to speak, but she lifted a hand to his face. It passed through him as if he were a ghost. Or she was. “I have loved you throughout time.” As she spoke, she moved back, the mists flowing around her legs. “I am bound to you, throughout time.”

Then lifting her arms, raising palms to the heavens, she closed her eyes. The wind roared in like a lion loosed from a cage, lifted her flaming hair, whipped the cloak around her.

“I have little left,” she called over the violence of the storm. “But I can still call up the wind. I can still call to your heart. Don’t keep it from me, Calin. Come to me soon. Find me. Or I’m lost.”

Then she was gone. Vanished. The earth trembled beneath his feet, the sky howled. And all went silent and still.

He awoke gasping for breath. And reaching out.

The Dark Path by James M. Bowers, Stacy Larae Bowers
His to Claim by Opal Carew
The Secret Lives of Hoarders: True Stories of Tackling Extreme Clutter by Matt Paxton, Phaedra Hise
Come Easy, Go Easy by James Hadley Chase
Inside the Machine: An Illustrated Introduction to Microprocessors and Computer Architecture by jon stokes
The Millionaire's Wish by Abigail Strom
In Dreams by J. Sterling
More Than Words Can Say by Robert Barclay
Stories in a Lost World: Bridget by Mortimer, L.C.
Room Service by Vanessa Stark
Our partner