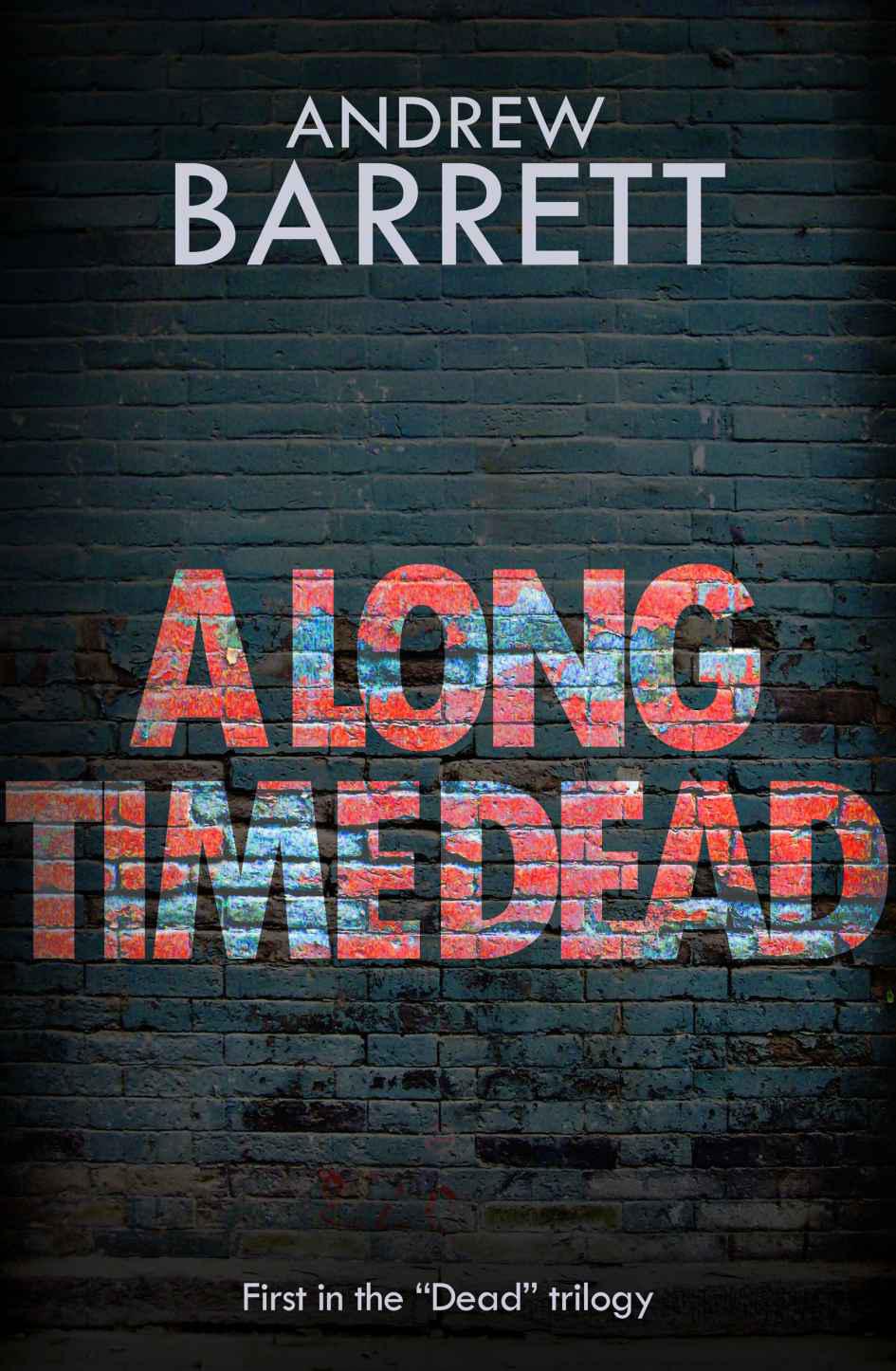 All characters and events in this publication are fictitious, and any resemblance is purely coincidental.

For Les Barrett; my dad, my mentor, and my hero.

Someone banged on the front door.

It boomed in the naked hall.

In the lounge, Sally’s tired eyes opened and struggled to focus. She peered at the clock on the chimneybreast. She wasn’t expecting anyone.

Whoever it was, banged again.

She climbed from the sofa, kicked empty lager cans under the chair, and nudged aside plates of dried bread crusts and greasy old chicken bones.

They banged the door again.

“Okay! Christ’s sake.” With dirty, shaking hands, she concealed syringes and empty foil wraps behind cushions, and stuffed burnt spoons and Rizlas in there too. If it was the coppers, there was no sense making their job easy; because if they banged her up for possession, Richie would put her in hospital. Again.

She glanced around at the lounge. Pinned across the chimneybreast was a single twisted length of red tinsel. And on the mantelpiece, two Christmas cards and her dull, leather-covered diary.

The hallway was dark and uninviting. Freezing cold, dank. Goosepimples erupted across her flesh. Her nose was running and she swiped an arm across it.

They banged again, hurried this time, annoyed this time. She flinched.

Sally inched the door open, looking past the rusted chain and out into the oppressive greyness of Turner Avenue where the visitor stood with his arms folded, foot tapping the step. A cold breeze stung her eyes.

The chain rattled and she stood aside. “Sorry,” she muttered. “Plenty of arseholes out there. Idiots too.”

The stranger brushed past Sally, and she shivered as his bulk settled in the hall, making it feel cramped, claustrophobic, an invasion of her space.

“Do I look like an idiot?” His voice was smooth yet gravelly.

She swallowed, brushed a hand through her hair and looked at the floor as he stared at her. “No,” she said. “You don’t look like an
idiot
at all.”

He eyed her, came really close. “How many other sluts work in Kirk Steeple? Ten? Fifty? Hundred?”

“Look, I’m sorry.” That was her second apology. She smiled up at him, a little nervously, but it was still a smile, a welcoming smile. A don’t-beat-the-shit-out-of-me, smile. For an instant, she felt almost brave.

She closed the door and shut out the breeze, and she looked at him glaring back at her with deep-set eyes; dark and piercing. His nose was bracketed by indentations as though he wore glasses.

“Stinks toxic in here,” he said. “You live like a bloody tramp.”

Sally deftly sidestepped the confrontation but knew this punter was different; this was a power man, a man who fucked hard before using his fists. But if he did, he wouldn’t get back in here again. Richie didn’t like her beaten to a pulp by punters, bad for business. Except when he was doing the beating. She sank into the role, “Listen, my bedroom’s upstairs… Here, let me take your coat.”

He wriggled out of it, handed it to her, all the while absorbing his surroundings as though listening for something, as though contemplating something. She hung the coat on a broken hook, and slid the chain back on. “How ’bout a nice massage before we get going?”

The man squinted at her.

“It’ll do you the world of good; get rid of your tiredness.”

“Will it take away the smell?”

“I’m good at it too. Had recommendations, I have,” she said proudly. “Bet you come back for more,” she hoped like hell that he wouldn’t. The claustrophobia eventually got the better of her and she squeezed past him and back into the sanctum of the lounge. “I got some new oils. It’s only an extra tenner—”

“Upstairs. On the left.”

Without another word, he strode through the lounge and disappeared from view.

“I’ll bring the oils up,” she called after him. “Just go straight into the bedroom.” He offered no reply. “Okay?”

Sally moved to the window and peered through the nicotine-stains, dirty fingers fidgeting. Her mouth was dry.

His footfalls grew quieter as he ascended the bare wooden stairs. The eighth stair creaked as it always did. Sally raced back into the hallway and began searching the overcoat, glancing over her shoulder as her hand found a wallet-sized lump.

Then she heard the toilet flush.

Quickly she fumbled for the pockets, hands working faster. The coat could have doubled as a marquee, and no matter how she turned it, mounds of fabric blocked her path. “Fuck,” she hissed. It was
there
, she could
feel
it. But she could not find a way in.

She heard the first footfall on the top step. He was supposed to stay—

Her shaking hand found an opening in the silk, reached in and grabbed the wallet. Permitting another glance over her shoulder, Sally scanned its contents, flicking through it like the pages of a book. “Christ,” she whispered. It was full of credit cards and cash. The eighth stair creaked. Sally randomly snatched a note, mimed
quick, quick, quick!

The footfalls grew louder. She heard a rustling sound.

Come on, come on!
She slapped the wallet shut, thrust it back into the silky opening and in her haste, almost fell into the lounge. She heard the grit beneath his shoes grinding on the bare wooden steps. Echoes crashed around the walls.

Sally’s dry mouth clacked and she looked down at the note – a
fifty
-pound note – in her hand, as she tripped through the lounge floor litter. Christ, if he catches me—

“You got the oils?” he shouted from the stairway.

She almost cried out.

She grabbed her diary, stuffed the booty inside and threw it on top of the wall unit. It skidded and smacked a photo frame. Dust plumed.

Her new client peered around the doorframe and watched her. “What was that?”

Sally took down the picture frame. “It was this,” she whispered, “my son.” Turning it over, she showed him the photograph of a baby boy. “Robin,” she tried to smile, “I like to remember him.” Her hands shook.

He ignored the picture. Stared at her. Unfeeling. Grey light fell on him as he walked into the room. The thin glass from the photograph shattered across the floor and she backed away, throat closed up tight, hands curled into fists across her chest.

He wore a green plastic smock. It rustled. The latex gloves he wore were tight against his skin, knuckles protruding. And the knife was in his right hand.

Sally collided with the settee and almost fell, jerking breaths, unable to turn away as he advanced. His feet crunched glass.

“Don’t want anything from you,” he said. “This… It’s nothing personal.” The blade flashed. “I just need the practice.”

The dart punctured Inspector Weston’s drooping left eye with a thud. The second one pierced the left nostril in his bent nose, and the final one caught him smack in the middle of his brow. Roger stepped up to the dartboard. “Prick.” He spat the word at the tattered photograph.

Behind him, in the kitchen, the toaster beeped.

“Yvonne,” he called louder. “Your toast is—”

“I heard you, dammit.” She moaned as she negotiated the last few steps into the lounge.

He buttered the toast, listening to her. “You okay?” Sucking melted butter from his fingers, he entered the lounge.

She didn’t even look up. “Just leave me alone.”

She glared at him.

“And I’m not your personal punch bag—”

“You should go to work. That’s what you should do.”

“Wrong attitude for someone wanting promotion.”

“Right attitude for someone…”

Yvonne looked up, eyes already made up with mascara. “You’ll never make a martyr, Rog.”

He stood silently cleaning his glasses on his waistcoat, before returning to the kitchen. “Want me to run a bath before I go?” He poured away her cold tea and made a fresh cup.

“It’s a simple question. Bath or not?” He grabbed the toast and tea, and marched back into the lounge.

“Leave me the
hell
alone.”

Roger stopped dead. The toast slid off the plate, landed butter side down.

Roger parked in one of the designated Scenes of Crime Officer bays, ignored the sneers from two passing police officers and almost felt like apologising for having the bay, while they had to park at the far side of the compound. Instead, he winked at them.

He climbed out, locked the car and shuddered at the endless winter’s drizzle. It was 7.30am, the sky was a turbulent lake, steadily decanting its load over Wakefield, and in particular, it seemed to Roger, over Wood Street Police Station. Floodlights caught the rain as it patted his shoulders. His feet trudged through slushy leaves engraved with tyre tracks, and the sounds of a busy morning in a city centre assaulted his ears.

Across Wood Street, next to the County Hall and Museum, shop windows shone on bedraggled commuters hurrying along beneath drab umbrellas, avoiding puddles and islands of sodden rubbish. In a few hours, the streets would heave with Wakefield Trinity fans on their regular encounter with humiliation, this time at the hands of local rivals Leeds.

For once Roger was glad to be working on a Saturday.

Near the ever-open barrier, an arm suddenly waved, followed by, “Mr Conniston. Sir!”

Hobnail, Wood Street’s ever-present beggar, stood in the car park entrance with an expectant grin on his face.

Roger looked at him through the rain, sighed and changed course. “Run out of people to piss off already?” He handed over a fiver. “Treat yourself to a scotch and a pint chaser, you old bugger,” he smiled. “And get out of this weather; fucking freezing.”

Hobnail’s face had already cracked open into a nicotine-stained grin, deepening the furrows around his eyes. His blackened nails pincered the fiver, pocketed it as quick as a magician. “Saw you in town again, couple of nights ago,” he said. “You do keep some strange hours.”

“Sorry, Mr Conniston; I was only pulling your—”

Hobnail stared after the car. “Prick. Does he work ‘ere, or has he come to a pay a speeding fine?”

“Inspector Weston. Ask
him
for money and he’ll pull your eyelids off.”

“He’ll kill somebody one of these days, Mr Conniston.”

Roger pondered Hobnail’s words as he walked towards the back entrance.

The dingy corridor leading to the Scenes of Crime Office was cold enough to cloud his breath. Roger strode along not thinking of Hobnail or even Weston. He thought of Yvonne and wondered why she, a woman who would not be going anywhere today, just as she didn’t go anywhere yesterday, and who wouldn’t be going anywhere tomorrow, had makeup on.

Making Monsters by McCormack, Nikki
Dead Man’s Hand by John Joseph Adams
The Sisters by Jensen, Nancy
1 Lost Under a Ladder by Linda O. Johnston
Cover Me by Catherine Mann
Soothsayer: Magic Is All Around Us (Soothsayer Series Book 1) by Allison Sipe
A Sound of Thunder and Other Stories by Ray Bradbury
Charity by Lesley Pearse
Hopscotch by Kevin J. Anderson
Relics by Mary Anna Evans
Our partner