Read A Long Walk Up the Waterslide Online

A Long Walk Up the Waterslide 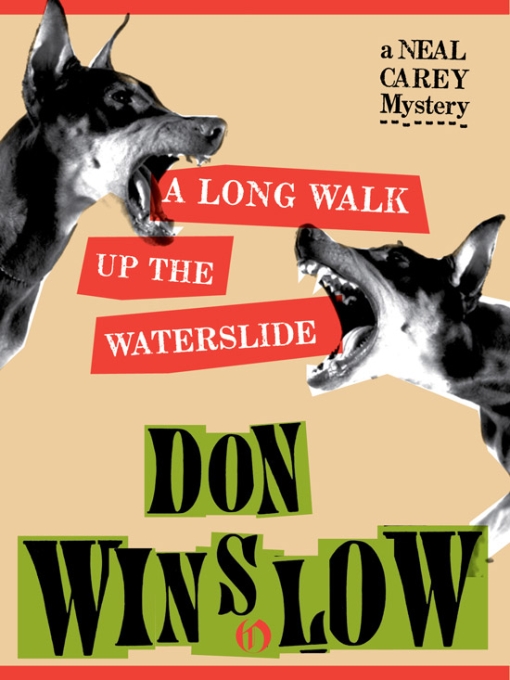 A Long Walk Up the Waterslide

“
Motive? There are only three motives:

A Biography of Don Winslow

He never should have smelled the coffee.

Neal Carey was lying in bed when the scent drifted under the door and snuck into his nose.

As he lingered in that pleasant zone between sleep and wakefulness, he savored the fact that it was Saturday morning and he didn't have to get up for anything. But the coffee smelled so good, not rushing-to-work, out-of-a-can coffee, but some of that special coffee that Karen had bought in Reno last month. Saturday-morning coffee, hazelnut or maybe Kenya AA, and he thought he detected a scent of chocolate.

If it was a custom blend, Karen must have been up early grinding it, which was unusual because she liked to sleep late on weekends. Neal pictured her shiny black hair and blue eyes and decided that maybe he’d join her in the kitchen so he could sip coffee and look at her. They could have a big breakfast and then drive out into the hills somewhere for a long hike, or maybe head out to Milkovsky ranch, borrow a couple of horses, and ride along Sandy Creek until they found a spot for a picnic. The day had the potential to be a glorious September Saturday in the northern Nevada wilderness known as the High Lonely, where for the first time in his life Neal Carey wasn’t a bit lonely.

And that coffee just smelled so damn good.

Neal rolled out of bed, opened the door, and heard a voice.

That
voice: the voice with all the soothing qualities of a rock scraping across a cheese grater.

“This is very nice,” the voice was saying. “Your own blend?”

“And these muffins,” the voice said, “delicious.”

“Neal made them,” Karen said.

Neal stood behind the bedroom door for a second, then walked through the small living room and stood in the kitchen doorway.

It isn’t just the voice, thought Neal. It’s the smile, the sweet, cheerful, mocking smile of a rat on a landfill.

Karen gave Neal a peck on the cheek and handed him a cup of coffee.

Maybe I should give this stuff up, Neal thought. It smells like battery acid, makes my stomach hurt, and gives me a headache.

He pulled out a chair and sat down at the table.

That’s where he made his big mistake. He should have gone back to bed, pulled the covers over his head, and refused to come out until Joe Graham was thirty thousand feet in the air, winging back to New York. If Neal Carey had done that, he never would have met Polly Paget, or gone to Candyland, or had to take a long walk up the water slide.

He smelled the coffee.

Then he drank it.

Son, this job is so simple,” Joe Graham said between bites of toast, “that even you could do it.”

“More orange juice, Joe?” Karen asked. She hovered over Graham with a pitcher in her hand. Before that, she’d hovered over him with a plate of scrambled eggs, fried potatoes, and rye toast. Prior to that, she had just generally hovered, dispensing coffee, juice, and muffins while she made breakfast.

Neal shot her a dirty look. In the nine months they had lived together, Karen had made breakfast for him exactly once—Pop-Tarts, burned.

Neal did most of the cooking in the house.

Until Graham arrives, Neal thought, and she turns into Aunt Bea.

Karen returned the dirty look. Not an Aunt Bea dirty look, but a Karen Hawley “don’t tread on me; I’ll cook breakfast any damn time I feel like it” look.

Besides, Karen loved Joe Graham. That little leprechaun face was just so damn cute, and the artificial arm made him so vulnerable. She liked the way he respected himself and the people around him. And she knew the story of how Graham had raised Neal from an abandoned child into a pretty decent human being. Karen treated Graham like a beloved father-in-law, even though he wasn’t Neal’s real father and Neal wasn’t her husband.

“So what is this? Your Serpico look?” Graham asked.

“Sort of a disguise,” Neal mumbled.

He was embarrassed. At first, the beard and hair were just that, a gesture toward disguising his identity, but then he came to like the look. Not even the look so much, he thought, but the feel: more laid-back, loosely wrapped, a nice change after he’d spent the first 27 years on his toes and wrapped tighter than the insides of a baseball.

“I like it,” Karen said. She ran her fingers through his hair where it met his collar. “But maybe I should give it a trim tonight. It’s looking a little shaggy.”

This is nice, Graham thought. This is nice for the kid; he finally has somebody. Every other time I’ve come to get him, I’ve found him buried in a stack of books, index cards, and bad memories. Kid used to eat self-pity like it was ice cream. This time, he’s with a stand-up woman who loves him so much, she doesn’t take any of his crap. And he can’t feel too sorry for himself; he opens his eyes in the morning and she’s there.

“So do you want work?” Graham asked.

“When did that start?” Graham asked. He felt it was his duty to insult Neal.

“It’s a recent development,” Neal admitted. “But I’ve been thinking about retiring.”

He’d been thinking about it real hard since the moment he squeezed the trigger and dropped a man dead in the snow. Then he disappeared into Karen Hawley’s bedroom and didn’t come out for weeks, hiding from the Feds, the Highway Patrol, and the local cops.

Then the funniest thing happened: nothing.

When he finally poked his head out—long hair, beard, and all—nobody cared. No cops came; no questions were asked; nobody in the little town of Austin, Nevada, said anything.

And Neal got a life.

“Working for Friends counts like dog years,” Neal answered, “so I’m really one hundred and ninety-six.”

Friends was shorthand for Friends of the Family, banker Ethan Kitteredge’s private organization that helped his wealthier clients out of jams, which usually meant putting Neal and Graham smack in the middle of one. Neal had just gotten out of the last jam, and wasn’t eager to get into another.

Besides, I’m happy, Graham, Neal thought. I get up in the morning, fix Karen her lunch, then go to my desk and work on my Smollett thesis until about noon. Then I either make lunch or walk down to Brogan’s for a sandwich and a beer, then back to work until late afternoon, when I whip up dinner. Then Karen comes home and we eat, after which she usually grades homework. Then we might watch a little television before we go to bed. I like my life.

“I’m thinking about transferring my credits from Columbia,” Neal said, “and finishing my degree at Nevada.”

Finishing my degree: It had an unreal sound to it. He’d been trying to finish his master’s degree for about six years, but work for Friends had taken him on some major detours from his goal of one day teaching English at a little college somewhere.

“Have you been getting the checks?” Graham asked.

Neal nodded. A few weeks after he’d gone underground, a package arrived at the door with a complete set of ID for a young man named Thomas Heskins. A few days after that, the checks started to come in an amount roughly equal to Neal’s monthly salary as an operative for Friends of the Family.

Karen frowned at the mention of the checks, which were a touchy subject in the house. Neal made more money sitting around the house working on “Tobias Smollett: The Image of the Outsider in the Eighteenth-Century English Novel” than Karen made working fifty-plus hours each week teaching elementary school. In typical Neal Carey fashion, he had decided to write his master’s thesis before enrolling in a graduate program.

“The checks,” Graham said, “were not meant to be a pension. They were sort of disability payments while you had to hide out.”

“What are you saying, Dad?” Neal asked.

“I’m saying you can be Neal Carey again if you want.”

Why would I want to do something like that? Neal thought.

“Who did you pay off?” Neal asked.

The “you” in this case being Kitteredge’s bank in Providence, Rhode Island.

“The usual,” Graham said. Washington politicians were about as hard to purchase as magazine subscriptions, although you did have to renew them more often. Besides, the feds didn’t have much of a hard-on for this case. If someone did them a favor by disposing of a dirtbag neo-Nazi like Strekker, well, it was one less dirtbag they had to worry about. Graham couldn’t prove that Neal had performed this particular service and they had never talked about it, but the last time Joe Graham had seen Neal Carey, he had been trotting out into the sagebrush with a rifle in his hands.

Because that was mostly what he did for Friends.

“What’s the beauty part?” Neal asked. Giving in and asking was easier than letting Graham drag it out.

“You don’t have to find anybody,” Graham answered. “We already found her.”

“We want you to teach her English.”

“Which leaves who and why,” Neal said.

“Are you taking the job?” asked Graham.

He wasn’t going to give up anything else unless Neal was on the job.

Uh-uh, thought Neal. I say yes and then you tell me you found her in some prison in Outer Mongolia and my job is to break in, teach her English, and escape on camelback across the Soviet Union.

“How much?” Karen asked Graham.

Neal raised his eyebrows at her.

“We’ve been talking about putting a deck on the back of the house,” she explained.

Neal turned to Graham. “What is she, a witness?”

The Bronte Sisters by Catherine Reef
Stepbrother's Gift by Krista Lakes
Salvation on Sand Mountain by Dennis Covington
Christmas with Billy and Me: A Short Story by Giovanna Fletcher
Prometheus and the Dragon (Atlas and the Winds Book 2) by Eric Michael Craig
Phobic by Cortney Pearson
The Parliament of Blood by Justin Richards
A Wild Swan by Michael Cunningham
Taste of Tenderloin by Gene O'Neill
Until I Die by Plum, Amy
Our partner