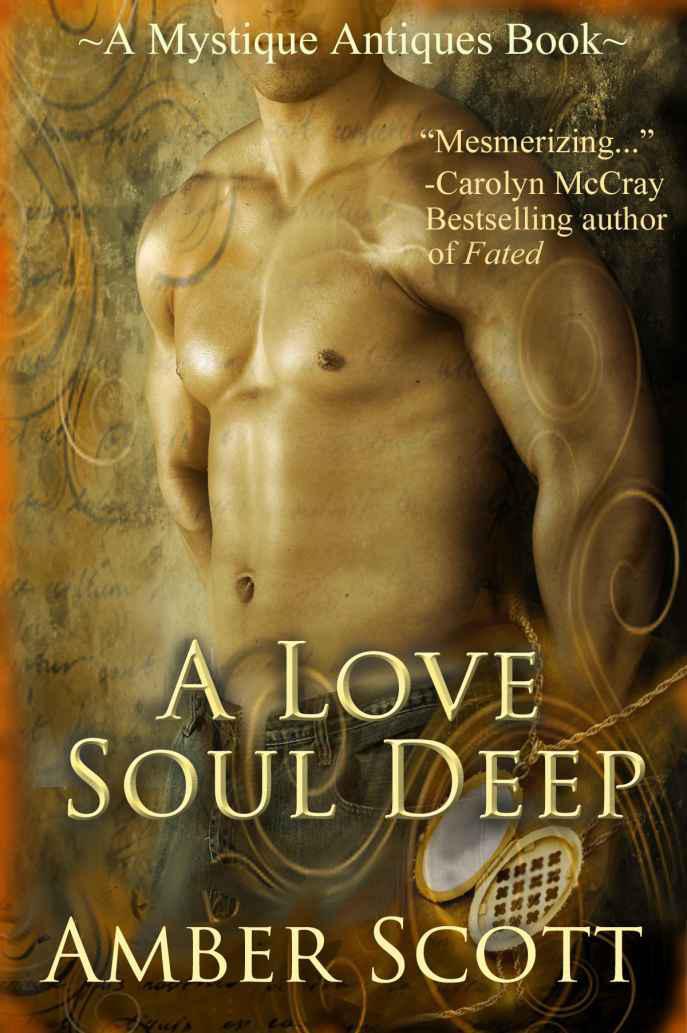 “This was the perfect blend of heat and romance…”
-The Bookish Snob, Reviewer

“Incredibly moving. The story stayed with me long after I finished it.” –Kelli McCracken, author of
What the Heart Wants

Hearing my best friend, Moira, laughing from Mystique Antiques’ anteroom plucked at my heart’s envy cords. What could be so funny? Stealing a glance at Moira leaning in to whisper another joke with her cousin, Kim, I scolded myself.
Sara Draeger, what in the world are you jealous of? She’s your oldest friend. And, it’s her cousin, for crying out loud. Get it together!

True enough. Still, our girls-only getaway to Savannah felt more like a Moira and Kim weekend for two. Sure, Moira rarely got to see Kim since she’d moved down South. Yes, I should have seen it coming. How many nights clubbing in Santa Monica did this exact thing happen? Me, sulking and trying to hide it, and Moira and Kim in a corner, having a riot of a good time, but oblivious to me.

With a frustrated sigh, I gave them my back and eyed a display case of heirloom jewelry. A pretty, pale blue-colored cameo pendant caught my eye, which. Made me wish I had a Scarlett O’Hara gown on, flipping a fan with a “fiddle-dee-dee.”

More like trouncing on the hem. While I wasn’t all that curvy, my height and trunks for legs clobbered grace. I meandered down the case, admiring an amethyst cocktail ring. Another chortle of laughter sounded from the other room.

What in the world could be so funny in such a sedate little shop?

I had to remind myself they would tell me. They always filled me in. They were not talking or laughing about me. I knew that. Reminding myself didn’t hurt, though.

I looked up from the lavender ring I’d been staring at, startled at the soft, female voice. Gentle, watery-blue eyes met mine. “No, thanks. Just looking.”

The clerk shook her wrist until the dangling key on her bracelet landed in her palm. “Each piece has a story.” She unlocked the display. “This ring here has quite a scandal attached to it.”

Curiosity made me lean in. “Oh?”

“Oh, yes, ma’am.” The round, lavender stone and flanking fat, winking diamonds sparkled. She offered me the ring.

“This ring and many more such gifts tended to go to the bride’s best friend rather than the bride herself, right up until the day the mistress died under mysterious circumstances.” The clerk angled the ring this way and that, rolling the price tag out for view. “There were whispers of poison and a brokenhearted husband. Friendships betrayed and such. Nothing proven, mind you.”

I gulped. Not only over the exorbitant price, but friendships betrayed. Jesus. I thought having Moira as my husband’s mistress might be the worst hell imaginable. Not that either of us had a husband. “Did they ever catch the killer?”

“Oh, no. No charges brought. Only whispers. I kind of have to wonder if folks didn’t think the girl deserved her fate.”

I gave a nervous twitter. “Depends on the husband, I’d say.”

My gaze skimmed over the bevy of pieces, my imagination stirred. “What piece has your favorite story?”

Her eyes lit knowingly. “Why, my piece, of course.”

My forehead wrinkled, announcing that skeptical scowl my mom hated most, despite my best efforts to keep a polite smile in place. “Your piece?”

Nodding, she shook out her wrist until a charm bracelet fell forth. Two charms hung from it—a tiny shoe and a wishbone. It didn’t look antique. Not that I had any kind of a trained eye. “It’s pretty,” I said.

“Well, pretty or not, it’s my heart’s deepest treasure.”

That knowing smile returned, giving her aged face a lovely softness I found myself envying. She seemed the kind of person who had lived and known the deepest loves and losses, who carried secret knowledge deep in her soul. The kind of knowledge a person longs for in their youth.

At least I did. Maybe that’s why I asked, “How did you know which one belonged to you?” I half expected her to think I was silly, strung along by a sales pitch.

“If there’s a story here that is yours, it’ll find you, darlin’.” She looked past my shoulder. “Can I help you, girls?”

“How much for this shawl?” Kim asked.

“Oh, Lordy, honey, now you’ve gone and tested me. Is a tag hanging on the edge, there?” I watched Kim lift and spread the baby blue garment wide, but my mind was on what the clerk had said before. “There it is. Now, where were we, dear?”

I shrugged. “Just looking some more, I guess.”

She left me to browse. Instead of breathing easier, though, my breathing hitched. My eyes scanned the two glass cases, searching for something, any item, that spoke to me. Kim and Moira came up behind me.

“Oooh. Look at that locket,” Kim said, the shawl already draped fashionably around her waist, giving her a sexy, bohemian look, designer jeans underneath and all.

The clerk peeked out. “Would you like to see it?”

The clerk retrieved an oval, gold locket strung on a long, sturdy chain. Kim and Moira both gave appreciative gasps. “Can I try it on?” Kim asked.

The clerk hesitated, glancing at me long enough that I shrugged one shoulder. Why would I care what she tried on? She pooled the locket and chain into Kim’s outstretched palm, and then handed Moira the cuff bracelet. My eyes went to the locket. I got a little irritated at the way Kim tipped her palm, letting the chain slide off here and there.

I
had
to get beyond this stupid competitive streak I had with Kim! First, the insecurity over her and Moira having nothing but a good time. Now, I wanted her to be careful with a locket? Kim reached to touch the cuff on Moira’s arm. The locket part spilled out, crashed onto the glass, and opened. The clerk simply watched us. Without thinking, I reached for the fallen locket, as did Kim. “Whoops,” she said. “Thanks, Sara. The thing nearly jumped out of my hand.”

The clerk, Kim, and Moira all gave a chuckle. “Actually,” Kim said to the clerk, “can I try that ring instead?”

I didn’t pay attention to which ring. My thoughts and vision zeroed in on the rescued locket, its light but solid weight, and the softness of the chain. Carefully, I opened the locket further. Two images were framed inside.

A woman who reminded me of the pioneer days my nana used to talk about before summer naptimes. And a bearded man. I stared at the man’s face. Something eerily familiar about him had me racking my brain. It was as though he looked like an actor, or, maybe someone I—

“Shit,” I said, almost dropping it.

My heart could have been a bird in my chest, flapping to be free.

“What?” Moira demanded, reaching for the locket.

I realized I was clutching it to my chest. I shook my head. I didn’t want to hand it over. Unreasonably, everything in me screamed to keep–to hide–the locket’s contents from my best friend. She’d know exactly who it looked like! She’d scoff if I bought it. She might want it for herself. I had to buy it. There was no question. “Nothing,” I squeaked. “Just pinched my finger in the thing.”

“That gold cuff there,” the clerk interrupted. “Has quite a story behind it.”

Her attention back on the clerk, Kim’s frown relaxed. I couldn’t hear the story past the roar in my ears. Blood and adrenaline. Surreptitiously, I turned so that I could view the locket again, but concealed from them.

A sight for sore eyes is the only way I could have described the ache and swell inside me over examining the picture closer. The man staring back at me looked so much like Crew, I’d swear it was. If I didn’t know better. Crew never wore a beard. Crew never lived during what looked like a hundred or more years ago.

Crew died eight years ago in a drunk driving accident. The inebriated soccer mom who hit him had been rushing to pick up her kid from school. He’d just left my apartment. Angry over some stupid thing couples fight about.

The force of the physical similarities pushed past logic and reason. Part of me swore, this was Crew. Him, staring back at me, that intense way of his reserved for me alone. I took a quiet, deep breath to steady myself. My hands trembled. I gently laid the locket on the glass and exchanged a look with the clerk.

She rang us up individually and sent us off with a wave. And, at me, a wink.

The sun on our shoulders, the three of us set off down the street looking for lunch. Silly or not, that wink warmed my heart. As did the cold metal of the locket against my warm sun-kissed skin.

For a brief moment, it was as if the entire interaction had been destined. It was as if God had given me a little bit of Crew back. How much had I wished it could be so much more? How fiercely had I wished for just one more day with Crew before he’d met his death. How many times had I wished I’d wake up, the car wreck that killed him no more than a nightmare?

I lay in bed staring at the crown molded, recessed ceiling of my room in the bed-and- breakfast, darkened by shadows. I tried to add up the hours of our time together. Two months, one week, and three days. Four days? No, only the three at the end. Crew and I hadn’t spent every hour of those few short weeks together, though. There was no real way to know. So, what did hours matter?

I toyed with the locket and walked through my memories. The remarkable shade of blue his eyes were, that in the right light looked green. Beyond the color though, the bare way he’d look at me remained forever branded in my heart.

How could such a brief romance affect me so much? And for so, so long?

Moira complained more than once that I’d placed Crew on a pedestal. That no man would ever measure up. Because how can anyone compete with perfect memories? Maybe she was right. Maybe in my loss of him, so suddenly, right when I’d been certain I loved him, I’d dusted the flaws away.

I secretly wondered if she still harbored a little resentment that he’d picked me, but not her. She didn’t even know about us until his death, though. Our brief, hot relationship had been a secret from my best friend. My idea. Moira and I had zeroed in on the same guy one night out dancing, and I’d hated the idea of hurting her. We’d never had the same taste in a guy before, and I wasn’t sure it would last long enough to be up front with her.

The Veil by Stuart Meczes
The Navigator of New York by Wayne Johnston
City of Strangers by John Shannon
Ever After Drake by Keary Taylor
21 Steps to Happiness by F. G. Gerson
Rangers: Silver-Star Seductions: A Two-Book Box Set by Ciana Stone
The White Road-CP-4 by John Connolly
Carnage and Culture: Landmark Battles in the Rise of Western Power by Victor Davis Hanson
How to Meditate by Pema Chödrön
Lasting Lyric by T.J. West
Our partner