Read A Magic of Dawn Online

A Magic of Dawn 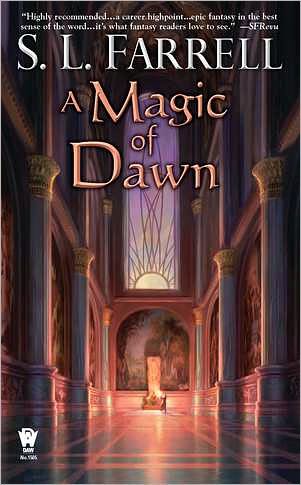 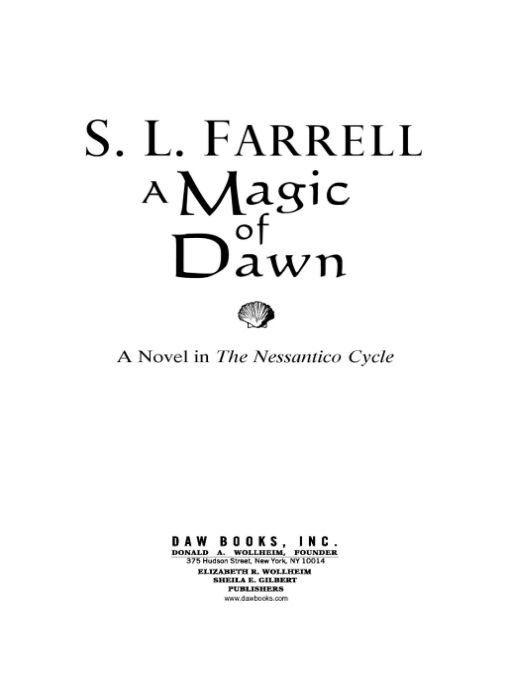 Table of Contents
Title Page
Copyright Page
Dedication
Acknowledgements
LAMENTATIONS
INCARNATIONS
PROGRESSIONS
ERUPTIONS
REALIZATIONS
MANEUVERS
ILLUMINATIONS
PRETENSIONS
FAILINGS
RESURRECTIONS
Epilogue: Nessantico
APPENDICES
Raves for the novels of the
Nessantico Cycle:
“S.L. Farrell delivers a vast, sprawling but riveting novel in
A Magic of Nightfall
, taking the storyline to an 11 in every way. The plot is complex and intricate, demonstrating masterful skill at the finer points of world building, and the cast is strongly drawn; there is no risk that any given character will be mistaken for another. Each has clearly defined qualities and needs, many of which are in sharp conflict with several others. Farrell may well be taking points from George R.R. Martin (who happens to be his editor in the Wild Cards series); Farrell’s work compares favorably to Martin’s Song of Fire and Ice epic, with equivalent complexity, sophistication and luxurious detail. Fans of one will absolutely want to read the other. In any event, books like this define the new generation of epic fantasy. Farrell has brought forth a terrific new series, one wherein the reader is kept guessing up to the last page (and beyond). I’m already eager to read the next installment. Strongly recommended.”
—
SF Revu
“Farrell easily wields an immense cast of characters, many of whom take narrative turns. Readers who appreciate intricate world building, intrigue and action will immerse themselves effortlessly in this rich and complex story.’
—
Publishers Weekly
“A thoroughly enjoyable ride.”
—
Cleveland Plain Dealer
“It’s always refreshing to read a fantasy where neither side in a conflict has much of a moral edge on the other, and the cast of characters is an enjoyable mix of the sympathetic, the villainous and the ambiguous. There’s definite potential here for a satisfying series.”
—
Kirkus Reviews
ALSO FROM S.L. FARRELL:
The Nessantico Cycle
A MAGIC OF TWILIGHT
A MAGIC OF NIGHTFALL
A MAGIC OF DAWN
The Cloudmages
HOLDER OF LIGHTNING
MAGE OF CLOUDS
HEIR OF STONE 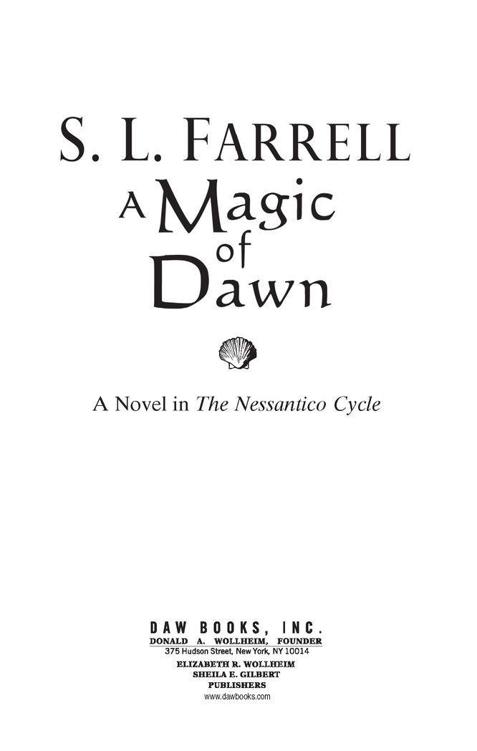 Copyright © 2010 by Stephen Leigh.
All rights reserved.
DAW Books Collectors No. 1505.
DAW Books are distributed by Penguin Group (USA)
All characters and events in this book are fictitious.
Any resemblance to persons living or dead is strictly coincidental.
The scanning, uploading and distribution of this book via the Internet or via any other means without the permission of the publisher is illegal, and punishable by law. Please purchase only authorized electronic editions, and do not participate in or encourage the electronic piracy of copyrighted materials. Your support of the author’s rights is appreciated.
First Paperback Printing, April 2011

To Devon & Megen—
Who have more influence on my work than they probably realize
And, as always, to Denise

Acknowledgments
I’ve read several books for inspiration and reference in writing this series. The books I read prior to starting the Nessantico Cycle as well as those read during the writing of
A Magic Of Twilight
and
A Magic Of Nightfall
are listed in those books; obviously, they too have also influenced this one. I’ve continued to read historical and other nonfiction texts for inspiration and research—it’s something I enjoy, in any case. Here are the books read during the writing of this book, all of which to some degree influenced this story.

•
Paris In The Middle Ages
by Simone Roux, University of Pennsylvania Press, 2009

A trip to France in 2005 also served as inspiration for much of the Nessantico Cycle. In particular, the Loire Valley region, with its chateaux and lovely countryside, sparked several ideas, as did our days in Paris. I would like to recommend that anyone going to France see the Loire Valley and spend time exploring not only the chateaux, but the small villages in the surrounding countryside such as Azay le Rideau or Villaines les-Rochers. Nessantico is not specifically France, but many details are drawn from our experiences there. Hopefully they have enriched the book.

It may sound strange to acknowledge a piece of software, but I will. Early in writing
A Magic Of Nightfall
, I stumbled across the most useful novel-writing software to have ever graced my computer: Scrivener. For those of you on the Macintosh platform, I can’t recommend it highly enough. Scrivener thinks the way I think, and allowed me to manage the monumental task of writing an epic fantasy far, far better than any word processor ever could. Thanks, Keith Blount, for creating this program! This book, in all its drafts and revisions, was written using Scrivener. For the curious, Scrivener can be found at
http://www.literatureandlatte.com/
My gratitude to my first readers, Denise Parsley Leigh, Bruce Schneier, Justin Scott, and Don Wenzel, who labored through the draft (Denise, through
all
of them!)—thanks for your input, folks. It was much appreciated!
Many thanks, as always, to my agent Merrilee Heifetz of Writers House, who has been my partner-in-writing for many years now—without her, none of this would have been possible.
And lastly (but certainly not last in importance) I’d like to express my gratitude to Sheila Gilbert, a most excellent editor and someone I also consider a friend. We’ve now worked together on several books, and her input and criticism has made each a richer book than it would have been otherwise. Thank you, Sheila! 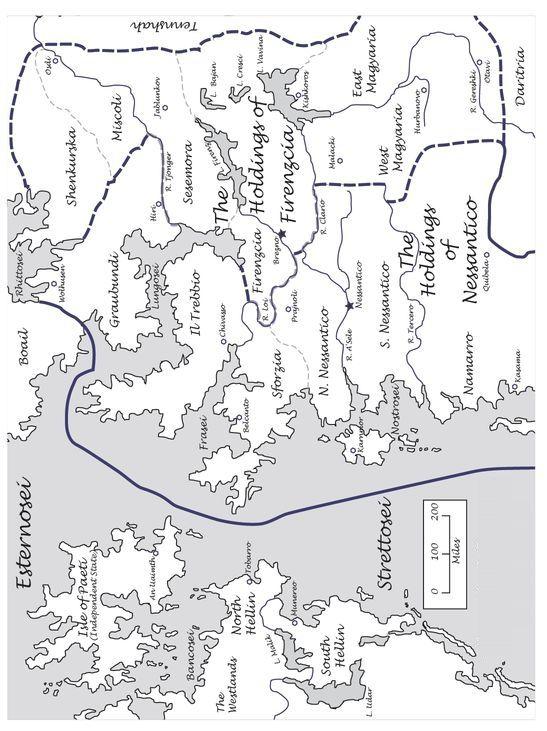