A Matter of Wife and Death (A Sibyl Potts Cozy Mystery, Book 4) 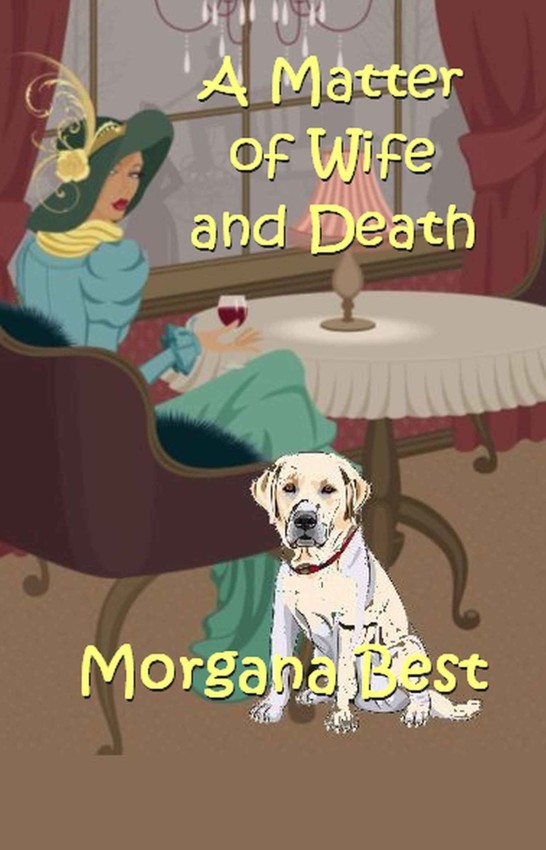 A Matter of Wife and Death

This ebook is licensed for your personal enjoyment only. This ebook may not be resold or given away to other people. If you would like to share this book with another person, please purchase an additional copy for each person you share it with. If you are reading this book and did not purchase it, or it was not purchased for your use only, then you should purchase your own copy from your favorite ebook retailer. Thank you for respecting the author’s hard work.

Next Book in this Series
.

Other books by Morgana Best.

“How are you with scrambled eggs?” Cressida asked, as soon as I answered my phone.

“Scrambled eggs?” I was bewildered.

“I just woke up.” I sat up in bed and rubbed my eyes. I’d had a long day of dog grooming clients the previous day, and had been up late grooming toy poodles for an important dog show.

“Dorothy had a run-in with Lisa, the new boarder, last night.”

I groaned. “Let me guess, Lisa said something about her cooking?” I could feel a headache coming on. Dorothy, the cook, had never read How to Win Friends and Influence People.

“Yes,” Cressida’s voice boomed, “and I need to have a nice breakfast for Lisa and her husband, what with them being honeymooners and all. Oh, don’t worry, Mr. Buttons is here now. He can help me with breakfast.” And with that, she hung up.

I snuggled back down into my blankets, and drifted off for what seemed like only seconds, before I was jerked from sleep once more.

I reached out and then knocked my phone to the floor, thankful that it didn’t fall on Sandy, my yellow Labrador, who was sleeping in her usual spot next to my bed. I snatched up the phone, slid my thumb across the screen, and held it to my ear.

“Hello?” I put on my best no-I-didn’t-just-wake-up voice.

“Get up here fast,” Cressida said, in a hushed voice.

“Mr. Buttons made a mess of the breakfast?” I guessed.

I wasn’t sure what Cressida said next, as every atom in my body froze in shock, but I did catch the words, death, and back yard.

I was at once wide awake, the words Cressida had spoken causing adrenaline to course through my system. I jumped out of bed and pulled on jeans, then threw on a sweatshirt. I ran to the back door and flung it open so Sandy could go outside when she woke up. At my front door, I tugged on some sneakers without socks, and then I was outside.

Death. That word hung in the air, as I ran toward the boarding house and the unknown.

The scene in the back yard at the boarding house made my blood run cold. Strewn over the green grass and purple and red geraniums of the garden were large pieces of metal and concrete. Lying amongst the rubble was Lisa. Her husband, Greg, was on his knees next to her, weeping loudly.

“I was out here having a cigarette and looking at the garden while talking to Lisa,” he sobbed. “All of a sudden, without warning, the railing gave way, and Lisa fell.”

I looked up at the balcony directly above me, and saw that the Juliet balustrade was missing.

I stood with Cressida in the foyer, and accepted a cup of English Breakfast tea from Mr. Buttons.

Cressida accepted her cup of tea from Mr. Buttons. “Is Greg up in his room?”

“Yes, I managed to pry him away from his poor wife,” Mr. Buttons said.

I shook my head. “This is horrible. Were you out in the garden when it happened, Mr. Buttons?”

Mr. Buttons shook his head. “No, it was too early. I heard a scream, and by the time I got out there, the woman was already lying on the ground motionless and her husband was trying to revive her.”

“Why us all the time?” Cressida asked, and although the question could certainly come off as self involved, I knew she had a point. Deaths, murders, and mysteries followed those at the boarding house, and it had only happened since I had moved there.

Before anyone could answer, Blake burst through the door, accompanied by Constable Andrews.

“Is everyone okay?” Blake asked as he stopped in front of the three of us.

Mr. Buttons pointed up the stairs. “Yes, in his room.”

“Good, keep him there. I’m going to check out the crime scene with Constable Andrews. Will you three stay here?”

Blake smiled a grim smile. “With you guys, it’s always a crime scene.”

I had no answer to that, and I watched as Blake walked toward the back of the house. Cressida, Mr. Buttons, and I stood in silence, sipping our tea, until Blake returned.

“Okay, what happened?” he said, pulling off his hat and rubbing his eyes.

“Her husband called out and woke up the whole house, about half an hour ago,” Cressida said. “We all rushed out, and there she was.”

Blake frowned. “He was the only one out there?”

“Yes,” Cressida said. “He said he usually smokes on the Juliet balcony, but this morning he went out into the back yard to smoke. Lisa was on the balcony, and they were talking when it collapsed.”

Blake was writing down everything Cressida said in a small notebook he had pulled out of his breast pocket. “And he’s still upstairs now?”

“Okay, I’m going to speak with him. You three are to stay put. Make sure no one leaves, and no one goes out back. Constable Andrews is doing some work there.”

When Blake reached the top of the stairs, I turned to Cressida and Mr. Buttons. “This one can’t be a murder, right? It’s just an accident, surely.”

“If it’s an accident, it’s my fault,” Cressida said, her voice breaking.

“It’s not your fault,” Mr. Buttons said, patting Cressida on the back. “Sometimes accidents happen.”

“She was so young,” Cressida said, holding the sleeve of her pajama shirt to her eyes as she began to cry. “Just married.”

“Let’s sit down,” Mr. Buttons suggested, and we moved to the side of the wall, where a padded love seat sat next to a small table upon which was a vase of fake flowers. Mr. Buttons indicated that Cressida should sit. “Do you need anything, Cressida?” he asked.

“No,” she sniffled, and appeared to be about to say something, when Constable Andrews rushed through the door.

Before he could answer, Blake appeared at the top of the stairs.

“Sergeant, it looks like the balcony was made to fall,” Constable Andrews called out. “It’s missing the bolts; it looks like someone removed them.”

“Look here,” Constable Andrews said, crouching by the balcony and pointing. Blake crouched next to him. From my position at the doorway, I was unable to see what they were looking at.

“What is it?” Cressida asked me, peering over my shoulder.

“You’re right,” Blake said to Constable Andrews. “The bolts have been cleanly removed. If the balustrade had simply collapsed, part of the bolts would have remained. The weight of anyone would be enough to make the balustrade collapse; it was just sitting there, completely unsupported.”

“Wouldn’t someone have been aware of someone taking all the time to remove the bolts?” Mr. Buttons asked.

I held up my hands. “All right,” I said, meaning what I said.

Greg appeared from behind the door. For a moment, I’d forgotten he was there.

The man didn’t speak, but looked off into the distance before rubbing his eyes and bursting into a fresh flood of tears. “It doesn’t make any sense,” he said between sobs. “I didn’t hear her call my name or anything before it happened. There was a strange sound, like a gate opening or something, and when I turned around, I saw her fall. I was helpless to save her.” His voice rose an octave. “That should’ve been me! I always smoke up on the balcony every morning, but for some reason, today I wanted to look at the garden close up.”

“Why?” Mr. Buttons blurted out.

“There are protesters who are giving my company a lot of grief,” Greg said. “After dealing with that sort of thing lately, I felt the need to take a minute and appreciate nature. I guess I wanted to look at the garden and be reassured that my work in town won’t be detrimental to what truly matters in the world. How ironic, eh?” He looked off into the distance. “I lost my wife while focusing on things that mattered less.”

I wondered why Blake was staring fixedly at Greg, but then Blake turned to me and gave me his police officer look. I stepped into the corridor, followed by Cressida and Mr. Buttons.

The three of us exchanged glances as Blake and Constable Andrews walked into the corridor behind us. “Cressida, you’ll need to find Mr. Summers another room. This room is a crime scene.”

“A crime scene?” Greg gasped, as his hand flew to this throat. “My wife fell from there.” He pointed to the balcony. “I was down there smoking and saw it happen. The railing gave way. No one pushed her!”

Constable Andrews held out his hand. In it were bolts and screws. “No one pushed her,” he said, “but these have been unscrewed.”

“Andrews!” Blake barked, and then jerked his head toward the front door. “Outside!”

Constable Andrews hurried off, while Mr. Buttons took Greg by the arm. “Come with me. I’ll make you a nice cup of tea,” he said, picking some lint from Greg’s shirt.