Read A Most Inconvenient Marriage Online

A Most Inconvenient Marriage 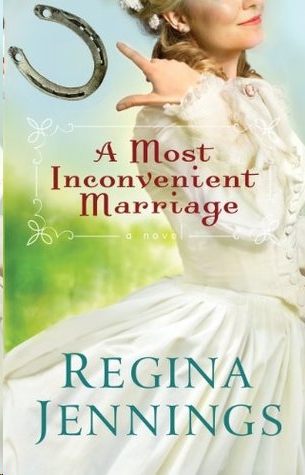 Author is represented by Books & Such Literary Agency

To my parents,
whose particular variety of inconvenience has stood the test of time.

“First, you’re going to write a good-bye letter to my sweetheart, and then you’re going to marry me.” The prisoner’s smile belied the beads of sweat condensing on his forehead.

Abigail Stuart wrung tepid water out of the rag and mopped his brow. “I will not write your Lady Juliet to tell her that I’ve replaced her. Your fever must be causing you to hallucinate. Romeo was no fickle lover.”

A fly landed on his chin. The prisoner lifted what was left of his arm, forgetting he couldn’t reach his mouth with the putrid stump. Abigail shooed the pest away and wished for a blanket to alleviate his chills. Two years of caring for the dying Confederate prisoners had numbed her to the sight of mangled flesh, but she’d never stopped mourning the senseless pain these young men suffered.

“You won’t be happy, Miss Abby. Not without a stable full of horses,” he said. “And I can give you that. You’ve got to be sick and tired of this prison.”

“My horses are gone. Nursing is all I have left.”

The man wet his lips. “Marry me and you won’t have to stay here another day. The farm, the stock, the nicest horseflesh in the hills—they’ll all be yours. If the last thing I can do with this life . . .”

Dr. Jonson caught Abigail’s eye. She’d already tarried too long with her favorite patient, but she wasn’t sorry. He’d been kind to her, no matter what color his uniform had been before they’d cut him out of it. She sloshed the rag in the basin. The gangrene had poisoned his blood. She didn’t have much time. Neither did he.

“What about your lady? Why not will the farm to her?”

“My sweetheart?” His eyes grew soft beneath the pain. He closed them and inhaled as though filling his lungs with the smell of fresh hay instead of the stench of the medical ward. With his good hand he tapped the thin mat beneath him. “My fiancée can take care of herself. This war won’t slow her down. It’s my . . . my sister that I worry about. Rachel isn’t strong—hasn’t been since she took the fever. You’re a nurse, and you could help her ma with the farm. It’s the perfect solution.”

A faint hope stirred in Abigail’s chest. Could this be the answer she’d been praying for? “But what if I don’t like the Ozarks? What if your family doesn’t welcome a Yankee invading their home?”

“Then walk away. What have you lost?”

She took his hand, surprised again by the dry heat in the freezing room. “You don’t even know your real name, Romeo. Or has that memory finally been restored, too?”

He wiggled his feet against the end of the cot and shuddered as another chill ravaged his body. Quickly he mastered the pain, and the smile returned.

She’d suspected that his memory loss was a convenient oc
currence, but like her, he had his reasons for hiding his past. “And what will I tell Lady Juliet?”

“The truth.” An ornery grin stretched across his face. “She might be angry, especially when you turn up, tall and fair—everything she’s not—but Rachel will be taken care of. That’s where my duty lies.”

Duty. Abigail knew only too well where misguided duty led. The graves outside the prison were filled with adherents.

“What’s it going to be, Miss Abby? Don’t leave me in suspense. I haven’t got time for a long engagement.”

She set the bowl on the stone floor and dried her hands on her apron. The South couldn’t hold out much longer. The war would end soon. Abigail had fended off proposals from lonely patients since the siege of Vicksburg, but soon those who survived would be reunited with their families and their loved ones. Soon she would be alone in a world where able-bodied men were scarce and opportunities to work even scarcer. She couldn’t go home. She wasn’t welcome there anymore. With all the upheaval caused by the war, perhaps she should consider this offer, no matter the risks. And like he said—if it didn’t work she hadn’t lost anything.

“Captain Calhoun, if you’ll allow me to procure a sheet of stationery, I’ll return and we can send your love to your intended. That’ll give me time to reflect—”

“While you’re gone, you might want to freshen up.” He winked mischievously. “I expect my bride to look her best.”

The stationmaster had said it was eight miles farther, but he hadn’t mentioned the steepness of the mountain trails. Still, Abigail
enjoyed the exertion in the chilly air, especially after her inactivity on the train. Muscles were meant to be challenged, so Abigail did her best to stretch her limbs in the privacy of the leafy path.

Moisture gathered between the fine riverbank gravel on the road. Water pooled beneath the pressure of her feet and then disappeared as she traveled upward, feeling the exertion in parts of her limbs that ladies didn’t mention. The acres of rocky forest contrasted with the smooth pasture and farms—proof of the heroic effort expended to create the few clearings.

She shouldn’t be surprised. Her Romeo had persevered like a hero, even if he was wearing the wrong color. He’d accepted the loss of his arm with fortitude, marching the two hundred fifty miles from Westport to St. Louis as a recent amputee, insisting he would soon be well enough to return to his hills and his love. But the infection he’d contracted along the way changed his focus.

By now his fiancée would know of his death. She would have his letter, and his family would have the notice penned by the medical staff. Abigail hadn’t allowed them to share news of the marriage, still unsure if she would make use of the gift Jeremiah Calhoun had given her. How hard would it be to hear that your lover had married someone else? Especially if he died before you could give him what for. But Abigail had to consider his sister—the sister whom he had loved enough to jilt his intended, to drop the pretense that he would recover and see to his responsibility. If nothing else, at least she was honoring Jeremiah by checking on his mother and sister. She wouldn’t remain if they were well, but where she’d go was still a mystery.

Abigail hadn’t truly had a home since Mama remarried. After the wedding, everything from her new colt to her father’s oak desk became John Dennison’s. And rather than bite her tongue in two, Abigail had expressed her opinion rather forcefully as John sold everything in the stables. But he’d taken his revenge.

Abigail brushed aside the troubling memory. Forget the past. She had no past. She’d only look ahead. A honey locust tree crowded the path, the thorns on its trunk mean enough to please a Roman centurion. Abigail crushed the sides of her jade skirt as she passed, protecting it from damage. Perhaps she should be wearing mourning, but it didn’t seem practical to dye her clothing before she decided if she was going to be a widow or not. With no new dresses since she’d left home, she couldn’t afford to waste one.

The road leveled and a roughhewn cabin appeared at the back of the next clearing. Smoke curled from the stovepipe, and a dog scrambled from beneath the porch to announce her presence.

She heard raised voices, louder than the dog they were attempting to quiet. A child started crying. Abigail gripped her satchel tighter and sped her steps, eager to leave the chaos behind her.

“Where you going to?”

She skidded to a stop but couldn’t find her questioner.

“I’m up here.” A grimy face peered down between the naked branches. The boy’s words whistled through the gap between his front teeth. “You’re new ’bout these parts.”

Was his face scratched or just dirty? Abigail couldn’t tell. The boy dropped down, not noticing when his bare feet hit the stony path.

“No, I’m not stopping,” Abigail said. “My destination is the Calhoun farm.”

“The Calhouns’?” A wide-eyed girl with uneven pigtails stepped out of the woods. “Should’ve known since you’re dressed all nice and that.”

“Me? Dressed nice?” Abigail looked at her traveling costume,
then at the girl’s shift. “Thank you, but I can’t stop to visit. I have an important—”

“Going to the Calhouns’?” A man stepped out of the cabin, his beard spread across his chest like a napkin at suppertime. “I reckon we can show you the way.”

“But it’s right along the road, isn’t it? The stationmaster said I couldn’t get lost.”

“No bother.” He stuck his head inside the cabin and called, “Irma, I’ll be back. Mind the hominy.” Pulling a threadbare felt hat off a nail, he bounded off the porch steps with elbows and knees flying like the wooden limberjack dolls the prisoners made. He skidded to a stop before her. “Is that your only bag?”

A mountain man, yes, but with his children climbing up his back and clinging to his hand, Abigail didn’t feel threatened. Even the dog ran circles around him, wagging its tail and barking playfully.

“The rest will be delivered tomorrow.”

“Oh, sure. Finley’s going to fetch them when he brings the post, huh? You wouldn’t want to carry your luggage through these hills. Not a fancy lady like you.”

And she had worried that her dresses were out of date. She surveyed the ragtag bunch. What if Jeremiah had exaggerated? What if his beautiful horse farm was no more than a cabin and some mules? The butterflies in her stomach turned into crazed birds. She slipped her hand into her pocket and held on to her father’s penny. Jeremiah had said his sister needed her. Could Abigail leave her in a battered cabin, just because she was accustomed to a prosperous farm?

“What’s your business at the Calhouns’?” With twinkling eyes the man pulled a corncob pipe out of his vest pocket and set it into his mouth.

Next Stop Funnel Cake by Champa, Heidi
Ascendant's Rite (The Moontide Quartet) by David Hair
A Gun for Sale by Graham Greene
Essential Maps for the Lost by Deb Caletti
Pegged By My Filthy Girlfriend by JT Holland
What Goes Around: A chilling psychological thriller by Julie Corbin
The Twilight Prisoner by Katherine Marsh
Primary Colors by Joe Klein
America's War for the Greater Middle East: A Military History by Andrew J. Bacevich
Darker by Trina M. Lee
Our partner